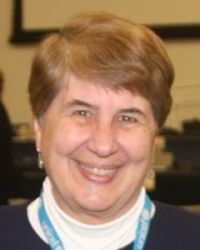 Caroljean Willie is a Sister of Charity of Cincinnati. She holds a Bachelor of Arts in sociology, a Master’s Degree in reading and a Ph.D. in Multicultural Education. She has extensive experience working cross-culturally throughout the United States, the Caribbean and Latin America She is a frequent speaker at regional and national conferences and has also given presentations in Africa, Asia, the Caribbean and Latin America. She recently completed two terms of office as the NGO representative at the United Nations for the Sisters of Charity Federation and currently serves as the program director at EarthConnection, her congregation’s environmental center in Cincinnati.

Blessed are they who are beautiful

The sound was deafening as we walked the litter-strewn paths of the Mitomba slums in Nairobi. At least a hundred men were hammering at the same time, creating kitchen utensils out of discarded oil drums while children ran barefoot back and forth among the vendors. We were visiting some of the recipients of small loans from Jamii Bora/Yawezekana, a microfinancing organization for which we help to provide funding.

Entertaining angels on the border

Spending time on the U.S./Mexican border in Texas working with those seeking asylum during the Advent season was, perhaps, one of the best preparations for Christmas. In the eyes of the men, women and children seeking shelter, I could see so clearly the face of Jesus whose parents, Mary and Joseph, were also seeking a place of refuge.

Recently I had the opportunity to travel to Kenya and Tanzania as part of a team from Microfinancing Partners in Africa (MPA) because I serve on its advisory board. Microfinancing Partners in Africa was started by Sr. Toni Temporiti, a Sister of the Most Precious Blood, to provide some funding for microfinancing programs in several African countries. Now the non-profit organization is working with African sisters to start new projects.

During my eight years as the NGO representative at the United Nations for the Sisters of Charity Federation, I had the opportunity to travel throughout the world and observe poverty first-hand in Asia, Africa and Latin America. But then I discovered the poverty in my own backyard.

The Sustainable Development Goals in action

A call to ecological conversion

The human face of climate change