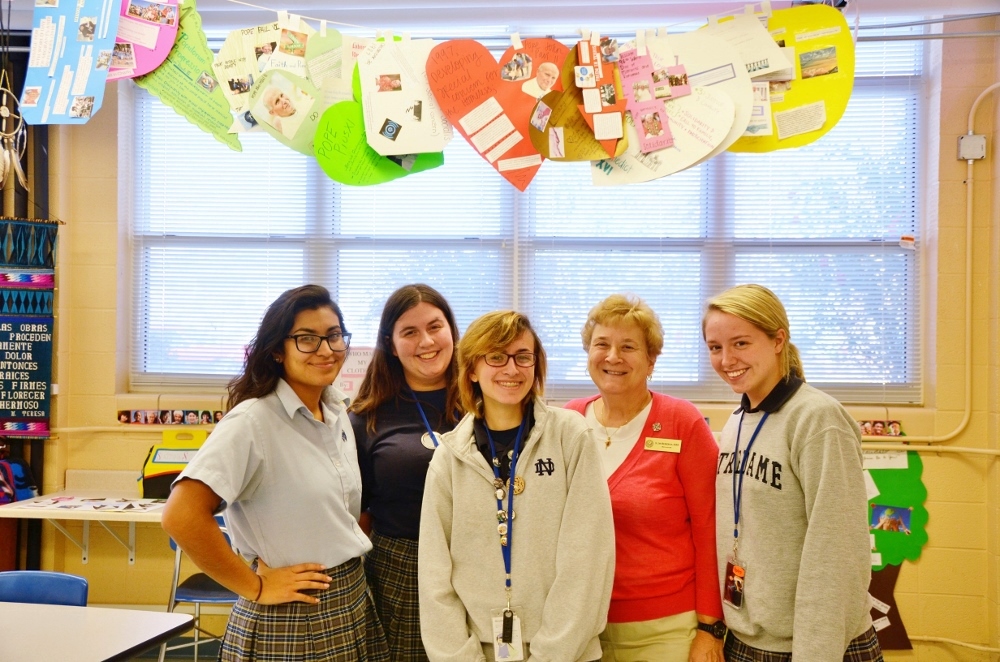 For the second time in one week I'm rearranging the furniture in my bedroom. Not a good sign. Something is trying to "bubble up" and I'm too noisy to listen. I need to breathe fresh air.

Living on the banks of the Mississippi, a migratory flyway for more than 325 bird species, I walk outside and feel the fresh November chill of the Cathedral of Old Oaks: geese honking their departure and squirrels witnessing what it means to go out on a limb.

It is out of this context of creation that I'm puzzling over my response to Pope Francis, especially as a Global Sister. How have I, trusting my life experience, education and collaboration, responded out of the agency that we women have?

"What we do with Francis is at least as important as what Francis does."1

These words of Richard Wood challenge me as I reflect on Pope Francis' presence among us when he visited the United States. For one precious week the tone of our civil discourse expressed compassion and hope. I watched with admiration as both Republicans and Democrats welcomed him. There was a respect across various ethnic and religious communities as he spoke to the United Nations. And his enthusiasm for families, especially those who were struggling, brought me to tears. Examples of working together for the common good gave me hope.

How do we as sisters fit into this picture? When have I heard of others doing what Francis does?

Images that come to me express the agency of women. We meet people struggling and bring their plight to prayer, dialogue and with a willingness to sacrifice. Through Christ-conscious-collaboration and experience we respond by moving toward the "common good." It's usually with little fanfare and even less money. But somehow, "budgeting in faith," Global Sisters and those with whom we partner make a difference.

So often this agency of women is exemplified in the long, arduous road of education. As I watched School Sister of Notre Dame Jan Berberich challenge senior girls at Notre Dame High to know where their clothes come from I witnessed a "global sister" in action. In her low-key, respectful and humorous style she invited the seniors to show relationships between the "dignity of the human person" and those who made their clothes. Through their research the students exposed the sordid reality of the labor of girls and women and their working conditions. How do we support those who provide better working conditions and look for "made in America" labels? And how do we through the agency of women respond to what the pope is asking?

This conversation led to a discussion of those caught in trafficking. How can we change the system? Sister Jan gave the example of congregations of women religious who ask hotels about their policies regarding educating their employees to recognize signs of trafficking. Jan said that this kind of policy, as well as fair labor practices, often determine whether a religious congregation will actually host an event at the respective hotel.

Changing systems through the agency of women demands a different set of skills from acts of charity.

My education as a Global Sister was enhanced by Vatican II. Pope Francis also came of age then and was challenged by the prophetic events of Vatican II. On December 7, 2015, we celebrate the golden anniversary of Gaudium et Spes:

How much this prophetic document has touched the agency of women: these words energized a whole generation of Catholic sisters. Living out of a "Catholicism" that was universal in its desire to work for the common good, sisters were seeking educational degrees in law, media, theology, political science and administration, bringing systemic change to direct ministry both in the U.S. and elsewhere.

They were also responding to the challenge of the 1971 World Synod of Bishops:

Action on behalf of justice and participation in the transformation of the world fully appear to us as a constitutive dimension of the preaching of the Gospel, or in other words, of the Church's mission for the redemption of the human race and its liberation from every oppressive situation. (Justice in the World, 6)

The students' discussion of trafficking and the need for systemic change reminded me of Mimi (not her real name). In September, I was standing near the Bus as a "Nun on the Bus," when an attractively dressed 30-something woman approached me. "Are you a nun?" she asked. When I said, "Yes," she spoke softly and said, "I was drugged by my husband and he sold me into trafficking. It was the sisters in San Antonio who helped me escape. . . ."

I almost stopped breathing as she shared her story. Her lovely face and sad eyes are present to me as I write this. I am grateful for the agency of women in helping Mimi find safety.

Working for systemic change found a receptive heart in the lives of many sisters. This was a challenge of both Vatican II and the World Synod of Bishops. Responding to these words a group of 47 sisters, with support from many others, met in December, 1971, at Trinity College, Washington, D.C. Coming out of their experiences of healthcare, education and community organizing, they created NETWORK, hoping to lobby for federal policies and legislation that promote economic and social justice. This emphasis on "systemic change" began with a two-person office in Washington, D.C., and a collection of $187! It was a prophetic moment where sisters felt their call to minister not only to those in need, but to seek legislation that would build an economics of inclusion.

Once again through the agency of women Catholic social justice principles were/are brought to life in working for systemic change.

The sisters and many co-workers who have brought NETWORK to life exemplify Pope Francis' dictum "A good Catholic meddles in politics." (Sept. 16, 2013)

While on the Bus, I watched Sister of Social Service Simone Campbell, executive director of NETWORK, engage a variety of people in a dozen town meetings. She showed remarkable respect in discussing the difficult realities of racial inequity, economic exclusion, immigration reform and so much more. In our debriefing she would often ask how we could have handled a situation with deeper understanding, coming to common ground.

The only experience I saw of a loss of common ground while being a "Nun on the Bus," was when we were picketed by members of Westboro Baptist Church. Some of them were children carrying "hate" signs regarding gay people and stood on a vacant lot across from the church where we were meeting. There was an audible gasp when Simone walked across the street to greet them. In the ensuing 10 minutes she attempted to engage their anger with her words of acceptance, pointing to God's love for all, regardless of sexual orientation. She returned to our group simply shaking her head. That evening she asked us how she might have handled the situation differently. Someone suggested that instead of talking Scripture, she might've asked them to introduce their children/family. Who knows.

This experience taught me how difficult it is to be open to an opinion with which I don't agree. Pope Francis exemplifies this openness in a remarkable way. I want to learn from him and others how to do this.

Last year I attended a Yale conference on climate change. When one of the presenters was unable to attend, the moderator, Mary Evelyn Tucker, explained her colleague's absence and said that she would read his presentation, which she did with great care and respect. At the question period someone asked if she agreed with what her colleague had written. "No," she said honestly, "but we invited those who have a variety of views on this issue so that we can come to greater clarity about what we believe. Hearing opposing views helps distill my own thinking."

This, too, is a way of living out the call of Francis. When we are unable to accept another opinion, hopefully we can go deeper.

Perhaps the way this reflection began is a metaphor: "rearranging the furniture in my heart" is the real challenge! "What we do with Francis is at least as important as what Francis does."

1 Richard Wood quoted by John Gehring in The Francis Effect: A Radical Pope’s Challenge to the American Church, 2015

[Judith Best, SSND, is coordinator of www.sturdyroots.org and gives presentations on the heritage of the School Sisters of Notre Dame. She is also exploring evolution as the bridge between science and religion.]

Ministry | Rearranging the furniture of my heart: 'Gaudium et Spes' at 50