I have loved to paint since I was a child. My parents allowed me to paint a landscape with a girl in it, on a wall of one of the rooms in our home. When I entered the monastery, our Lord in time granted me the opportunity to study at the Lviv National Academy of Arts (Ukraine) in the department of iconography.

Our teacher often told us that painting is like praying, like breathing — simple and not forced. Then we would ask, "Why doesn't everyone paint icons?" His answer was, "Because of fear and a conviction that they do not know how. This paralyses them." In the beginning, when I hesitated and said, undecided, that I did not know how to continue painting, he would advise: "With your heart, my dear, you must paint with your heart." That became my inspiration and gave me the courage to paint icons. This theory was tested in a church in the city of Zhytomyr, Ukraine.

Our sisters of the Order of Saint Basil the Great have been ministering in this city with prayerful presence and apostolic works since 2005. At the invitation of the local bishop and pastor, we came to this city on the feast of the Entrance of our Blessed Mother into the Temple. After two years, the auxiliary-bishop of the Kyiv Archeparchy blessed a small monastery building, which was bought with the assistance of a charitable organization, honoring this feast. Since then, the continuing presence of the Basilian sisters in Zhytomyr has brought a bountiful growth of Christian awareness to many children, youth and adults.

Soon it became apparent that there was the need for additional space to receive people who needed to talk, pray or seek other assistance. An idea was born: Create a small social center and a monastery church-chapel. Through the help of caring individuals and organizations, and with the hard work of many individuals, this dream became a reality within 10 years.

Throughout this entire time, our sisters continued catechetical classes at the monastery, for the mission parish of St. Basil the Great of the Ukrainian Greek Catholic Church. Since 2007, we have had an active icon-writing catechetical school, "Odyhidra," offered to children, youth and adults. Groups of handcraft classes also meet regularly.

With God's help and the support of many people, it was possible to build the monastery church by 2014, where there was a wonderful opportunity for me to test the theory of the need to "paint with the heart." We sisters decided to use our own talents and skills to paint the church, and I was given the responsibility of directing the painting of icons in our monastery church. I will not say that the responsibility was easy — but it was a ministry to which God called me.

Beginning in 2015, at the invitation of the local superior, Sr. Marhareta Gutnyk, groups of Basilian sisters from various corners of Europe have gathered once a year for a month to paint icons on the walls of the church. So far, the participants have included: Srs. Dia Zahurska, Yevstakhiya Romanchuk, Mykhaila Kindra, Khrystofora Ternynko, Romana Hutnyk, Yelysaveta Varnitska and Yakynta Hulkovska.

Sensing a need "to help the sisters" in the painting of the church, acquaintances and total strangers of various religious faiths began to join us in our efforts, each according to their individual abilities. Each one felt that an important event was occurring — the painting of a church; therefore, the stirring in their hearts melted all obstacles, fears and uncertainties.

The shared work for the glory of God filled all the participants with special joy and inspiration. Step-by-step, colorful iconographic compositions in the traditional style of Eastern Catholic churches filled this holy place with the visible presence of the invisible God and the saints.

Though the sisters of the local community in Zhytomyr all volunteered to help, when it came time to paint the dome — which is 10 meters high — not everyone found it easy to ascend the scaffolding to such heights without fear and trepidation! It was especially difficult in the beginning, when the scaffolding swayed. Those apprehensively climbing could not utter a word as they held their breath in anticipation of reaching their goal.

One young sister, after climbing and reaching the summit, simply sat down and cried, "O Jesus, what the sisters will not do just for you!" However, with time, the fears vanished and we were all able to reminisce and laugh about our first fearful experiences.

Undeniably, the desire in our hearts allowed miracles to happen, with God's help, and our dreams became reality. Many people came to visit and see how the work was progressing, and this united and encouraged us in our efforts. One time a high-ranking official, his wife and autistic son arrived to lend their helping hands. I was deeply moved, realizing that the people coming to help truly believed this was a common cause and that their participation would bring blessings to them and help them conquer personal problems and difficulties. After working for one month a year for four years, most of the church is now painted.

Many unusual incidents occurred while we were painting the icons. One cloudy, cold morning, as the sisters settled into their places on the scaffolding in the church, an unfamiliar woman walked into the church. She quietly stood in its midst, examining at all the icons and then pronounced: "Ah, here with you — there is warmth and light!"

Truly, the walls of the church reflect the light of Christ upon those praying, showing a glimpse of the holy and inviting each one to partake of it for eternity!

[Nazariya Nataliya Mykhayliuk is a Sister of the Order of Saint Basil the Great (Province of the Most Holy Trinity), an international order of the Eastern Catholic Church. She studied economics at Lviv University in the Ukraine and has worked in school and parish ministry with sisters from the Philadelphia Province at a Ukrainian Catholic parish in Mississauga, Canada, near Toronto. After final vows in 2002, she studied iconography in Lviv, then was missioned to Zhytomyr. She is currently serving in Rome as General Councilor in the administration of her order.] 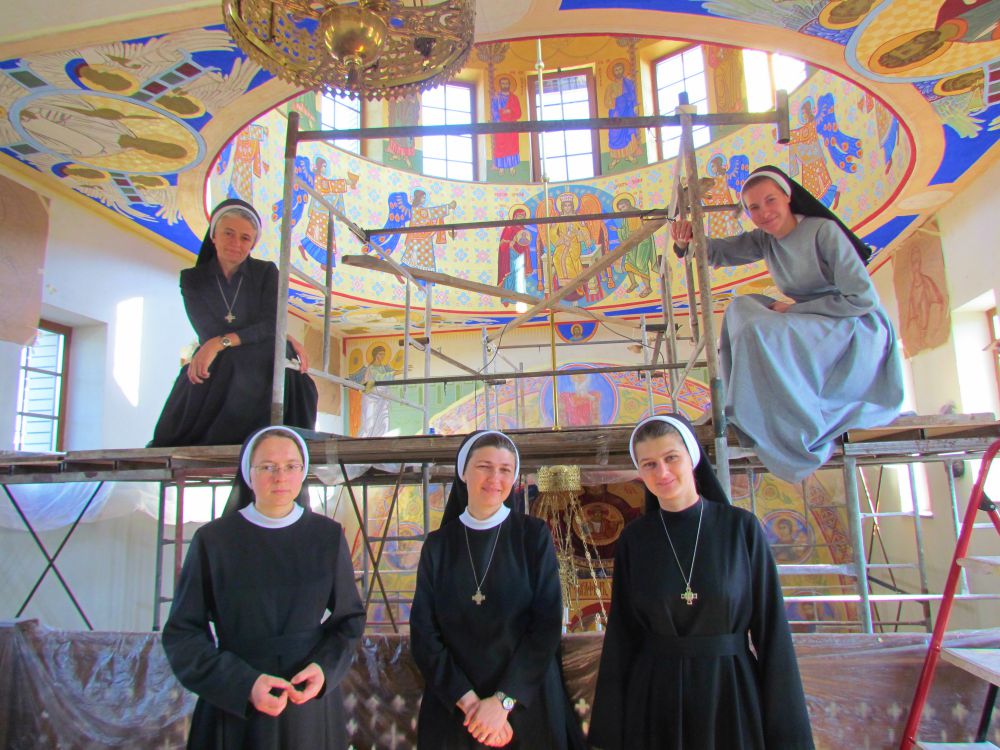 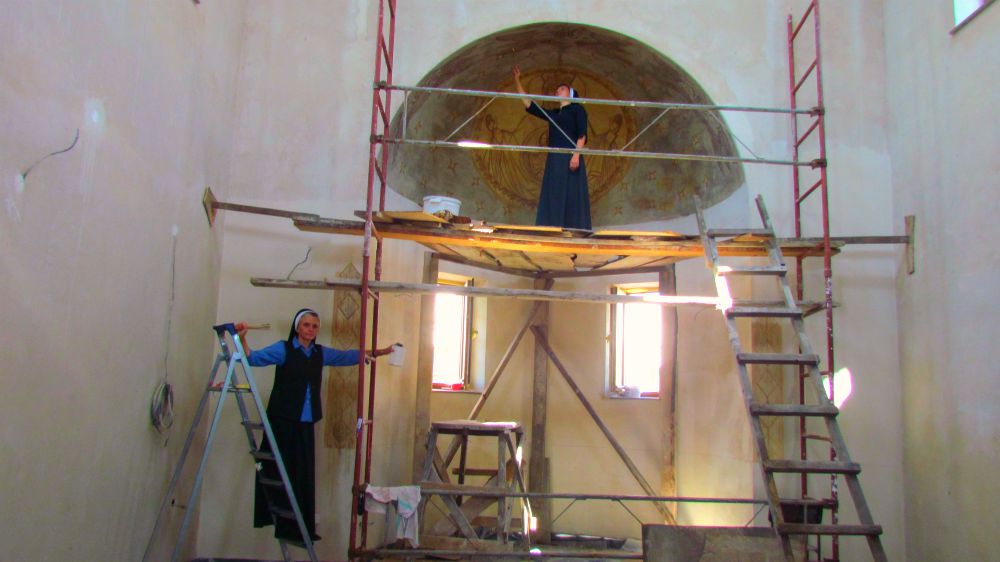 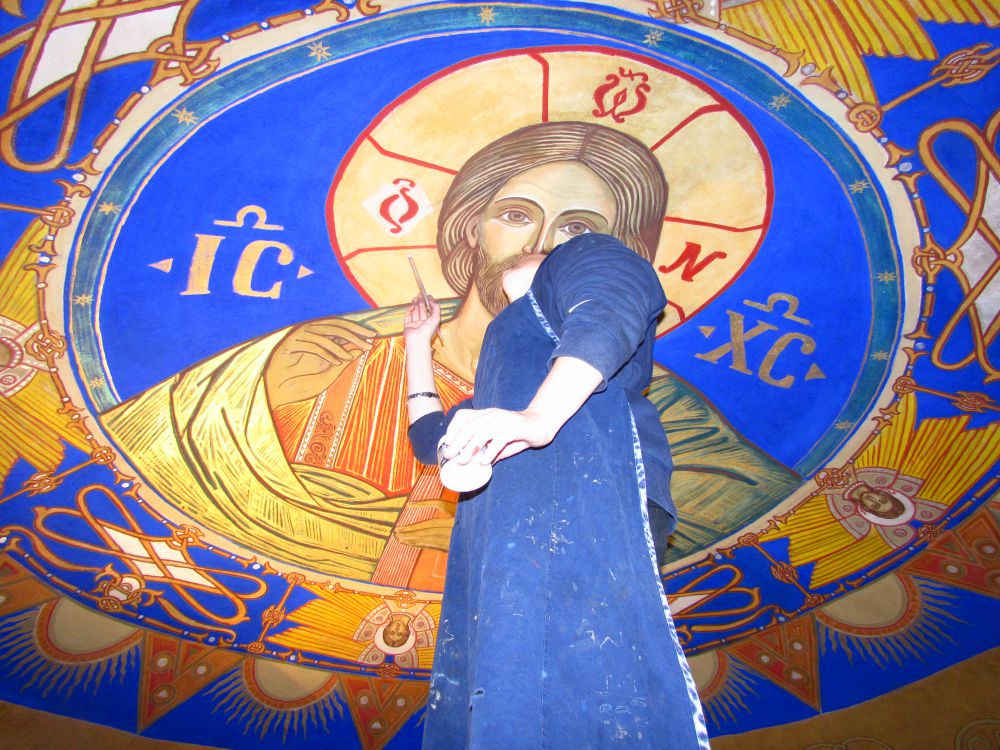 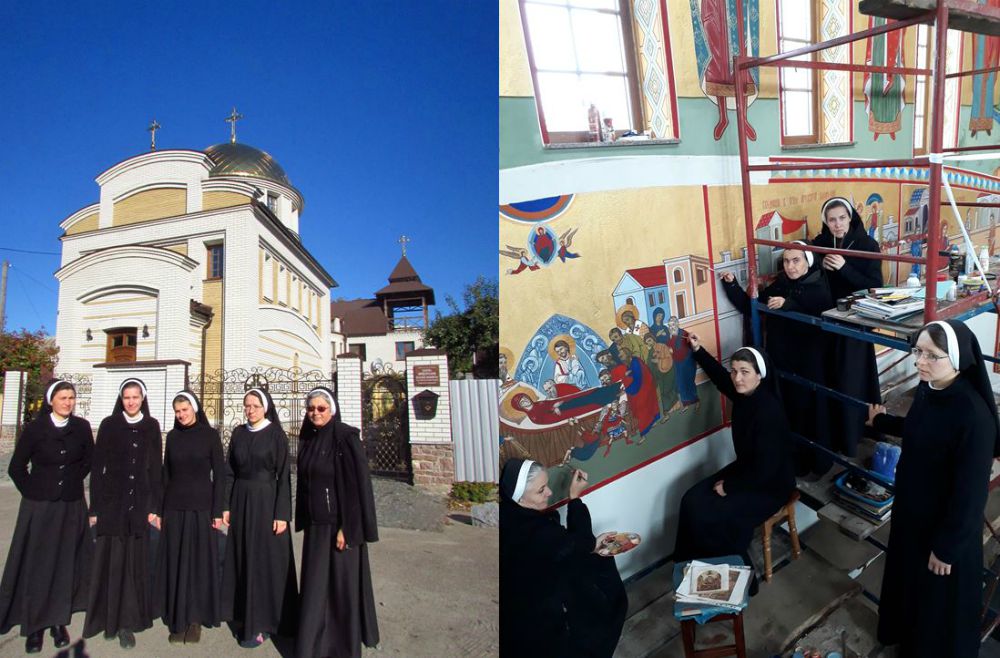