The relevance of religious life today 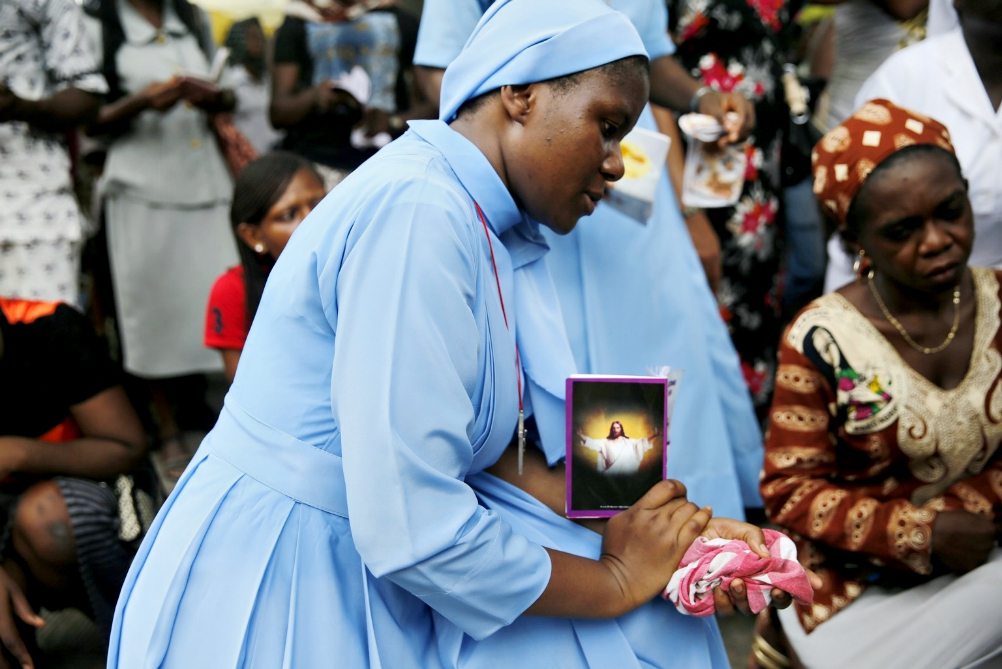 A sister prays outside a Catholic church in Lagos, Nigeria, during a re-enactment of Jesus' passion and crucifixion as part of Holy Week celebrations in 2015. (CNS / Reuters / Akintunde Akinleye)

My years of religious life have exposed me to different people, places and experiences: I have encountered both young and old, male and female, Christians and non-Christians. From them, I have learned some key lessons, one of which is the relevance of religious life in our world today.

I still can visualize encounters in which some persons approached me simply because I was a sister in a religious habit. For the same reason, a few others decide to keep their distance — maybe because I remind them of God who deserves their honor.

I have entertained different questions, such as "Why are you in this garb?" or "What makes you tick?" Some are surprised that religious sisters still exist.

In Bournemouth, England, a lady in her 50s told me, "I thought this kind of life was a thing of the '60s." She had not seen sisters for years, though she lives in a town that welcomes visitors from all over the world. Therefore, for her, sisterhood is an old story. Her surprise notwithstanding, she was happy to have met me by the end of our encounter.

In Nigeria, generally speaking, many people are delighted to see religious sisters; they feel a kind of hope and sense of security when they see a sister. Giving them a listening ear encourages them to share the stories of their lives.

I will always remember a personal encounter with a little girl of about 8 years who asked me to help her cross a highway. I was touched. I marveled at her trust and manner of approach. Of course, I helped her across the road and prayed for her safety.

Once in Stoke-on-Trent, England, I met a member of the Society for the Propagation of Faith who travels round the world propagating mission activities. He meets many sisters in his travels, and he asked me why sisters have such broad smiles.

Working in their apostolates and living out their specific charisms in different walks of life, sisters engage with people of all kinds. Their maternal traits flourish and shine in these areas.

Take for instance, my institute — Sisters of the Immaculate Heart of Mary, Mother of Christ — in living out our charism of "compassion in the spirit of humility," we engage in pastoral, medical, educational and social ministry.

We are also involved in mission outside Nigeria (in other African countries, Europe and the U.S.) and we are experiencing positive responses in those areas. Many other sisters of different congregations also engage in the education of children and youth from nursery school to university level.

It is always possible to see the good qualities of individuals who have encountered sisters in Catholic schools; and many of those former students later come back to express their gratitude.

People have a thirst for God, but know little about him. Sisters, among other ministers of evangelization, serve as "pointers" to him. No wonder the Catholic Church has for years supported and encouraged the presence of religious life.

The church involves religious in its missionary activities, believing that consecrated life "manifests and signifies the inner nature of the Christian calling" (Ad Gentes). St. Pope John Paul II affirmed the choice of religious life by the church in Vita Consecrata, asserting, "The consecrated life inspires and accompanies the spread of evangelization in the different parts of the world."

In the social sphere, the Nigeria Conference of Women Religious gives a powerful collective witness. Speaking out and acting against the trafficking of women, in 1999 the conference formed a committee — the Committee for the Support of the Dignity of Women — after reports of trafficking reached the major superiors in 1998.

They have managed to rehabilitate many women trafficked for forced prostitution from Nigeria to Italy and other European countries. They have brought the repatriated women new life and new meaning in life. Like St. Iraneaus, one of the Fathers of the Church, sisters believe that "man fully alive is the glory of God."

St. Louis Sr. Patricia Ebegbulem, a member of the Committee for the Support of the Dignity of Women, wrote a book on human trafficking (Stop Trafficking in Women and Girls) for schools, to sensitize youth to the reality of human trafficking and show them how to avoid being victims. This is just one example of the ways sisters touch lives.

People find it especially difficult to reconcile the mystery of suffering — especially the suffering of an innocent person — with a good, caring and loving God. On one occasion, I was riding in an ambulance with a sick person when a paramedic told me he couldn't fathom why God would allow the suffering of innocent children, which he saw many times in the course of his duties. I think the discussion about God and his strange ways may have occurred because he knew I was a sister.

A young boy in his first year at university who could not be cured of an infection asked me if God existed, and why God allowed the chaos in his family. Although these people may have contributed to their predicament, I refused to judge them (John 8:11); rather, I encouraged them, especially the university boy, to know a little about this God before thinking he would bring a change to their situation.

Sisters assist people to learn to accept the will of a loving God whose ways are not our ways — a mysterious God, a merciful God, a God who knows all, and is almighty.

So, like many other sisters, sometimes I encourage people to swim against the tides of life believing and hoping in God; at other times, I just share the joy of Christ. In this way, we try to make Jesus known, and participate in the Christian calling of reconciling people with God (2 Corinthians 5:18).

Religious sisters help make the presence of God palpable to the people of the world. Relying on the assistance of Mary, Mother of God, we seek to achieve our goals and follow in the footsteps of Jesus of Nazareth.

[Sr. Mary Judith Ezeogu is from Nigeria, a member of the Sisters of the Immaculate Heart of Mary, Mother of Christ. She serves as an assistant secretary for her congregation, and helps in its communication office.]

Create a farm, anchor a community in life