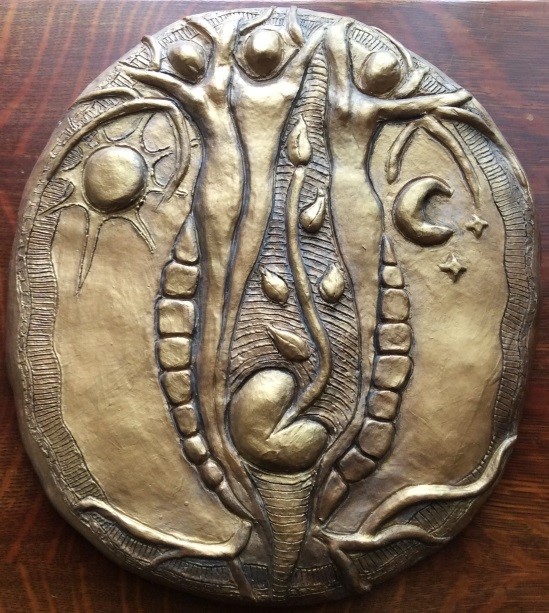 Sculpture created by Sr. Kenise Neill of the Sisterrs of St. Joseph of the Sacred Heart to celebrate "Munga Winki," a song sung by aboriginal women to celebrate the sacred darkness between moonset and sunrise. (Provided photo)

"While travelling to a women's camp on child protection, an Anangu Elder, Mrs. Waniwa Lester (born in Pukatja, in the Central Desert of Australia) shared a traditional story. The theme of the story was the importance of children carrying the spirit of their mother within them, and how life depended on this story being carried forward, and not being discarded and replaced by that which is new and not the mother." — Sr. Joan Healy of the Religious of St. Joseph of Australia

Let me put this in context by reflecting on how church, society, and the child protection system view the care and protection of children.

We, the church, are being challenged to raise our consciousness to a level where we will avoid repeating the mistakes of the past in our care and protection of children. I propose the way forward is contrary to our natural instinct and how we have responded in the past.

In his 1861 book Great Expectations, Charles Dickens clearly showed his privileged-class readers the poverty and terrible conditions endured by the underclasses in London. He helped them see what was always in their midst, though unobserved. The child Pip, one of the main characters in this book, was the one most aware of what was wrong in his world. As he reflected on his childhood, Pip commented:

In the little world in which children have their existence, whosoever brings them up, there is nothing so finely perceived and so finely felt, as injustice. ...

It is the most miserable thing to feel ashamed of home.

When our community's foundress, Mary MacKillop, was in London in 1873, she wrote a detailed description of her Sisters of St. Joseph congregation's mandate to do everything possible to improve the lot of the children of people who live in poverty. Contrary to what one might have expected, she spoke strongly against the idea of sisters giving music lessons to these children. Her reasoning was  they might grow up "totally opposed to their position in life, neglecting essential things ... dissatisfied with their state ... ashamed of their parents."

The most poignant and heartfelt lesson I have learned about the impact of poverty and abuse of state authority was from two interactions with aboriginal parents when I worked in child protection on the Aṉangu Pitjantjatjara Yankunytjatjara lands in South Australia.

The first was with the mother of a 12-year-old who was out of control and had begun sniffing gasoline. When I was offering the mother suggestions as to how she could try to rein in his behavior, she told me I was the boss, then explained that the "welfare" had taken her authority away by not showing her respect as the parent. She also told me, calmly and without blame, that "welfare" had provided clothes and sports equipment for her child, goods she would never be in a position to provide him on her limited income.

Before this, I had assumed we had helped children, families and the community by providing these items, and I was deeply disturbed by what I perceived as my part in taking away both her authority as a parent and her pride in providing for her child.

In her book Sojourn on Another Planet, Nancy Shepherd, a missionary who worked in Pukatja in south Australia in the 1950s, shares a similar experience. She described how children compared the missionaries who were "educated" with their parents, who continued to live as their ancestors had done for thousands of generations. The children openly disparaged their parents, even calling their mothers una (rubbish).

Nancy described one situation where a mother had not known her daughter was sleeping with a boy. Not understanding how this could be, Nancy approached the mother, saying:

"I am very sorry about this ... but I can't understand how you have not known where she was sleeping? You are her mother."

She glanced at me without reproach, and then said evenly, "You have taught our children not to listen to us."

I learned a second lesson when attending the funeral of a teenager who died as a result of self-inflicted injuries. The young man had been removed from his parents, community and country as a young child and placed under the care of the state minister. As I was the person responsible for children with Youth Court Guardianship Orders, the family invited me to stand with his parents.

I cannot think of another situation where I felt so responsible and so powerless.

Child-protection systems are overwhelmed, and foster placements cannot keep pace with the ever-increasing demand. Removing children is costly for parents and the state and carries huge risks for the children. We know that the outcomes for children who stay at home and receive intensive family support are much better than that of those who are removed.

In crisis situations, there is a natural tendency for state- and church-based organizations to assume the responsibility for the care for children. This is an impossible task, as no state department or church organization can function as the family unit.

Undoubtedly, there are some rare circumstances where children need to be removed from parents for their best interests, but I have never met a child who would choose to be separated from his or her parents or parents who don't want the best for their children.

A social worker can draw on the many models of intervention when working with children and families, but the best way forward, almost without exception, is defined by the family itself. Children can be at risk when their families are trying to cope with insurmountable problems like poverty, trauma or racism and when overwhelmed by the daily grind of providing food and shelter.

If the focus was on family preservation and the best interests of the child and not solely on safety, children would be at less risk.

Over generations throughout the Western world, we have unashamedly "rescued" children from their families of origin without addressing the social issues that caused the problem.

On March 19, 2013, St. Joseph's Day, Pope Francis called us to be protectors of all life. He described St. Joseph as having a vocation of the custos, the protector. We know Mary Mackillop herself was an advocate for children, understood the devastation of poverty and did what she could to help children thrive in their families of origin.

Compassion is at the heart of the care and protection of children. The journey ahead will require us to stand with parents, their children, in and through suffering to safeguard the natural ties between parents and children and address poverty. Our attempts to safeguard children outside of their family will be to repeat the mistakes of the past. The casualty will be future generations.

"Our role is no longer to merely ease suffering,
bind up wounds,
and feed the hungry
but through every form of effort
to raise the powers of love upward to the next stage of consciousness."
— Pierre Teilhard de Chardin

[Sr. Kenise Marie Neill of the Sisters of St. Joseph of the Sacred Heart has worked in child protection and social welfare in Australia for many years. Her ministry has included a variety of child care programs at both the delivery level — from an orphanage to statuatory child protection — and senior management in policy and program development with Aboriginal Family Support Services.]

Something I can do