We are displaced people; we wonder what is next

by Maria Hanna
Ministry
This article appears in the Iraq feature series. View the full series. 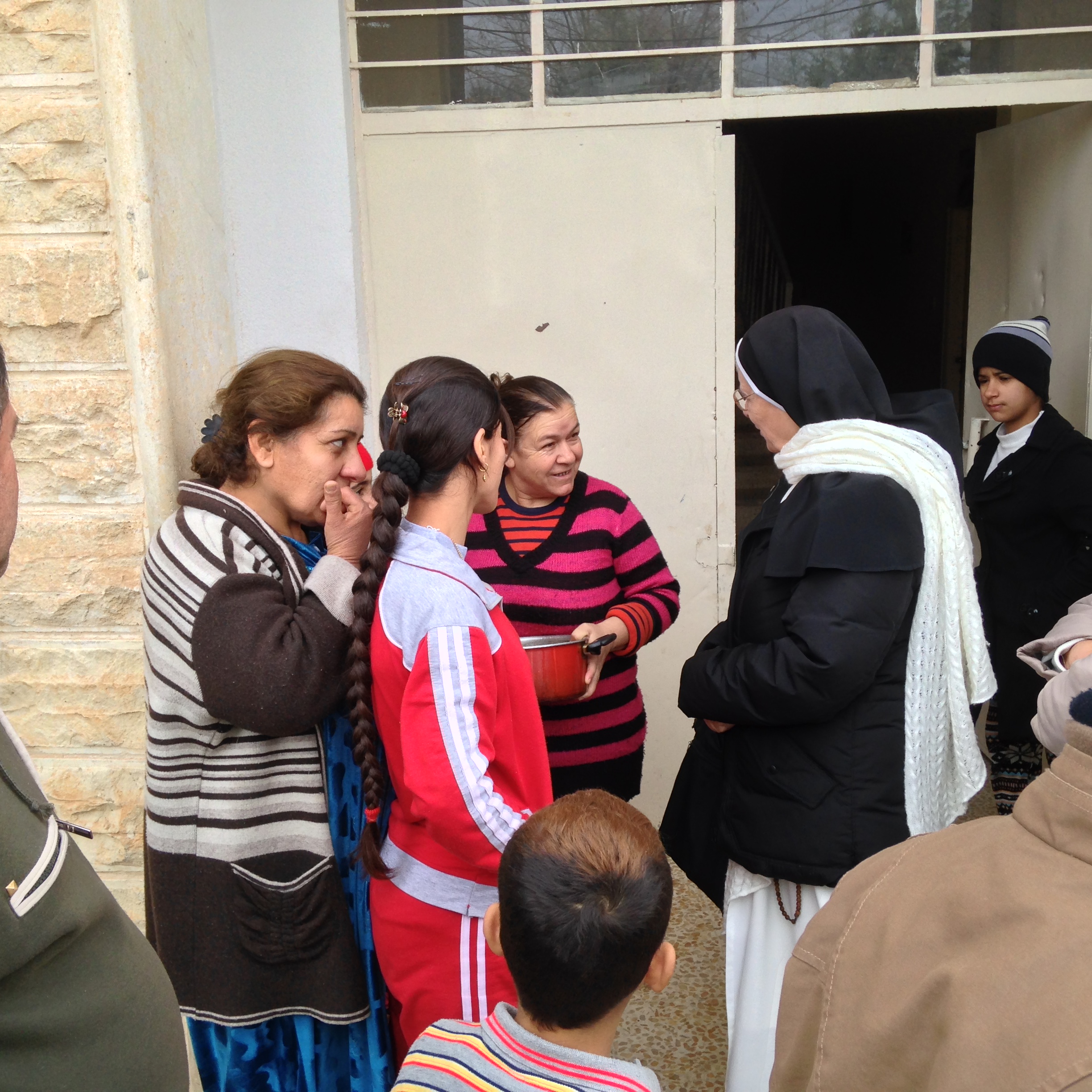 Editor’s note: Dominican Sr. Maria Hanna is the prioress general of the Dominican Sisters of St. Catherine of Siena in Ankawa on the outskirts of Erbil in Iraqi Kurdistan. In August 2014, the sisters, along with other Christians, were forced to flee Qaraqosh and other towns and villages in the Nineveh Plain when the Islamic State, or ISIS, seized control of the area. On July 22, Hanna wrote the following open letter to U.S. Dominicans and other supporters.

As we approach the first anniversary of our displacement, we look back and recall the past 12 months. We undertake this recollection to call to mind what the Lord has done for us, and how he accompanied us throughout the night of Aug. 6, 2014, as we were displaced with his people. This memory impels us to pray to the Lord so that we might be enlightened to understand his will for our lives during this crisis. Doing so, we would like to share with you our vision, our hope and also our fears. We thank you for being with and accompanying us in our journey, breathing in us the spirit of courage to continue on our way.

As we remember last August, the words of the Psalm 124: 2-3 come to our mind: “If the Lord had not been on our side when people attacked us, they would have swallowed us alive.” It was really a dark night when we left, not knowing what to take with us or what to leave behind. Christians were everywhere on the road, not knowing what direction they should take. The shadow of ISIS’s hatred surrounded everything, and we understood little of what was happening.

When we eventually arrived in Kurdistan, many people were homeless in the street; they were like sheep without a shepherd. After a few days in Erbil, we realized that our towns in the Plain of Nineveh had been taken by ISIS, and our return became a distant and uncertain dream.

To add insult to injury, it was not only ISIS that increased our loss and our anguish but also our non-Christian neighbors, our friends in the neighboring villages, whom we served, taught and gave treatment — they betrayed us in times of trouble and crisis.

It was not easy to accept the fact that we were displaced people, almost abandoned by the Iraqi and Kurdish governments whose initiatives and acts were not up to the level we expected. The church took the responsibility for us, trying to gather and support the internally displaced persons (IDPs) who were scattered all over the region of Kurdistan.

As a community, realizing how dramatic the condition was, we thought of ways to mitigate the crisis and help people with their basic needs. We started our projects with empty hands, but with the help of our Dominican sisters and brothers, our friends and different organizations, we were able to provide the IDPs with food and non-food items. We distributed blankets and mattresses for 5,000 families; milk, diapers, housewares, towels, soap, summer blankets for 10,000 families; shoes for 740 pupils; and 5,000 air-coolers, 600 refrigerators and 400 water-coolers. Although some of these items were distributed for the IDPs in general, our focus was on the displaced families who rented houses. They are paying significant money for rent, and many of them do not have any income.

Additionally, we thought of children who were lost in the midst of this chaos. We opened two kindergartens where children can come for free and cooperated with some organizations to open a charitable clinic for the IDPs. And we have just got a license to open a primary school, also for free; we rented a place and hope it will be for the benefit of the IDPs. The aim of this is to show the IDPs the loving care of the church.

Having said that, we have to admit that work with and for the IDPs was not always manageable. There were some challenges that really burdened our mission. There are so many IDPs that sometimes we feel as if our work is inconsequential. Also, we were not prepared for this kind of work, nor have we skills to deal with it. Most shocking was the unexpected death of 10 sisters (most of them were in their 70s) in a very short period of time (three months).

Despite that, our ministry continues to be strengthened by the Lord, who blesses our efforts no matter how modest they are. Being occupied with such projects, we do not forget our mission to preach the word of God for our troubled people. Since winter, some of our sisters have been preparing 400 children for first Communion in six groups. The last first Communion celebration was on July 12. Moreover, the sisters will start preparing another 100 children for first Communion in towns and villages in Erbil and Duhok.

Additionally, sisters continue to go to the IDPs camps to minister: give talks, form groups of young people to have different spiritual exercises, pray with them and arrange Masses. (We still remember vividly the first Mass two of our sisters attended at one of the IDPs camps when they had no altar; they used a desk, and one of the sisters laid her scapular on it as an altar cover.) The main aim of our work is to make sure that IDPs know that they are not ignored or abandoned by the local church.

Thank God, we have just had our annual retreat conducted by Dominican Fr. Ifram Saqat, who is a biblical scholar and a psychologist. This helped us to make an interior journey and to recognize kindness, mercy and compassion in ourselves and others through forgiveness and reconciliation. We were 68 sisters. They were very blessed days. Hopefully, it will be for the benefit of each sister.

Now, as IDPs, and with the rest of our people, we do face everyday challenges. We wonder how long this will last. Our hearts are filled with sadness and overwhelming grief. We wait but we get nothing; we think but do not understand. What is next? No one knows. Where are we going? Everyone is lost. Yes, we do have shelter but our hearts are anxious and the relationships are truly troubled and the reality is bitter.

Most elites have already left, and many are thinking of leaving the country because of the unhealthy conditions in which they live. Hundreds of IDPs are living in small, dark and damp caravans (cubicles). With the help of Pontifical Mission (the name of the Catholic Near East Welfare Association's operating arm in the Middle East) and L’oeuvre d’Orient, we are working to provide apartments for the IDPs. There is an unfinished building of five floors; we thought of building 146 apartments on the second and third floors. We depend on people of goodwill who help the IDPs live with dignity and hope.

We ask you to continue to pray for us. And thank you for being with us over the past 12 months.

[Maria Hanna, OP, is a member of the Dominican Sisters of Saint Catherine of Siena – Iraq.]

Editor's note: This story has been updated to clarify the nomenclature of the "Pontifical Mission," which is what the Catholic Near East Welfare Association is known as in the Middle East. Established as an ad hoc mission by Pope Pius XII for Palestinian refugees, the original "Pontifical Mission for Palestine" has extended reach to include addressing the needs of all refugees and marginalized peoples of the Middle East. It is administered and led by CNEWA.

For background on the situation, read:
A year after fleeing, Dominican Sisters in Iraq face day-to-day struggle by Dawn Cherie Araujo

Ministry | We are displaced people; we wonder what is next