• We are displaced persons; we wonder what is next by Dominican Sr. Maria Hanna

This article appears in the Iraq feature series. View the full series. 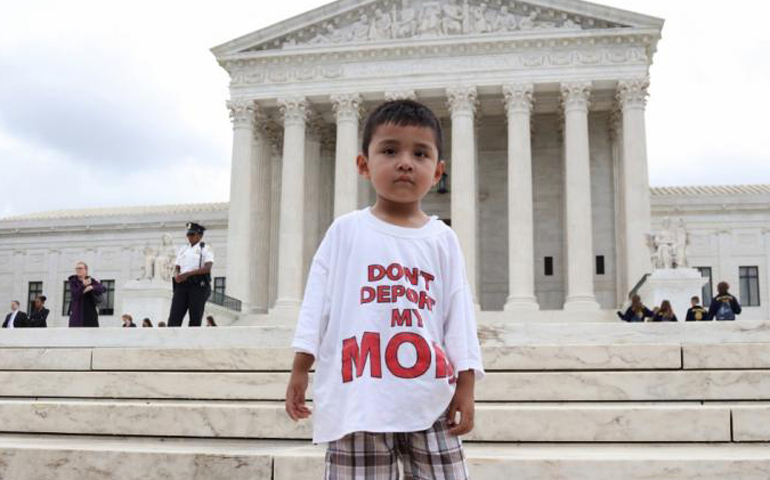 A row of 'caravan' dwellings at 128 Camp, where displaced persons were living in January when three U.S. Dominican Sisters went to visit. The shelters keep out the elements better than tents but provide little privacy. (Marcelline Koch)

Three hundred and sixty-four days ago, in the deep dark of night, the Dominican Sisters of St. Catherine of Siena fled their home in Qaraqosh, Iraq.

The sisters were some of the last Christians to leave this region of Iraq; two months before, the militant Islamic group ISIS had seized the neighboring city of Mosul, telling the local Christians that if they wanted to stay alive, they needed either to evacuate, pay a tribute to ISIS or convert to Islam. An estimated 500,000 Christians fled Mosul and headed north toward Iraqi Kurdistan. Soon, people in Qaraqosh were saying that ISIS was coming for them next. Defiantly, the Dominican Sisters opted to stay and continue their education and health ministries for the people of Qaraqosh.

But then the Kurdish defense forces that had been protecting the city left, and phone calls started pouring in to the sisters’ home. It was too dangerous, the sisters needed to get out, people were saying. And so, with hours to spare, the sisters, too, fled north.

In an open letter penned last month, the sisters’ prioress general, Sr. Maria Hanna, describes that evacuation night as terrifying and precarious, sharing that the sisters didn’t know “what to take with us or what to leave behind.” Sr. Diana Momeka, who would eventually come to the U.S. to testify about ISIS before Congress, left Qaraqosh with only her purse and habit.

As Global Sisters Report reported in February, the sisters ended up in Erbil, the capital of Iraqi Kurdistan, where they quickly began ministering to people in the displacement camps. But by all accounts, though, it’s been tough year, which is not to say there hasn’t been progress. For instance, in January, the sisters only had one school for displaced children — a kindergarten run out of an apartment. Today, they operate two kindergartens and, according to an email sent to GSR last month, they are in the process of opening a seven-room primary school that will emphasize peace education. The sisters have also been working with the Pontifical Mission and the Paris-based L’Oeuvre d’Orient to try and move people out of the displacement camps and into apartments.

Still, the situation is precarious. ISIS has already tried to encroach on Erbil several times, and even if ISIS weren’t breathing down the displaced population’s neck, poor physical conditions make long-term living in Erbil untenable; many families still live in small aluminum containers, and electricity is spotty in a region where summer temperatures can reach the triple digits.

“The sisters’ lives have kept on, but they struggle to keep up with the day to day,” said Springfield, Illinois, Dominican Sr. Marcelline Koch. Koch, a member of the North American Dominican Iraq Coordinating Committee, is one of three Dominican sisters from the U.S. who visited Erbil this winter. Koch said the sisters provided one of the only sources of hope in the displacement camps, which is why she and other U.S. Dominican sisters are marking one year of the Iraqi sisters’ exile with a number of efforts to support them.

Adrian, Michigan Dominican Sr. Barbara Cervenka is organizing a group of Dominican artists to sell original artwork featuring paper cranes in order to raise money for the Iraqi sisters’ Erbil ministries. Similarly, the Iraq Coordinating Committee is encouraging people to make origami cranes of their own to send to U.S. Secretary of State John Kerry along with postcards urging him to increase humanitarian aid in Iraq. The committee has also put together a downloadable prayer service and written an op-ed they’re hoping to get printed in a national newspaper.

It’s not just that the U.S. Dominicans have a special relationship with their sisters in Iraq (although they do — U.S. sisters first went to Iraq in 1999, and Iraqi sisters have been coming to study at the Adrian motherhouse since 2005), this also about what Sr. Marcelline Koch calls the transgression of creating displaced people.

“In the Catholic tradition, we talk about sin,” she said. “We talk about very serious sin, and when I was in Erbil, I remember thinking it’s a very serious sin for governments, world leaders — whoever’s responsible — to make refugees out of people.”

Technically, the Iraqis in Erbil are not refugees: They’re internally displaced persons because they haven’t crossed international lines. But Koch said getting out of Iraq or Iraqi Kurdistan is not a guarantee the Iraqis fleeing ISIS will actually gain refugee status and the protections that status confers. The Iraq Coordinating Committee has heard that the United Nations refugee agency in Jordan — where many Iraqis have fled — is so overwhelmed with applications that they’ve turned away as many as 50 Iraqi families at a time. The U.N. did not respond to GSR requests for comment.

Meanwhile, ISIS continues to terrorize Iraq and Syria, using a remarkably focused social media strategy (read this and this for more on that) to grow their supporter base.

Patrick James, director of the Center for International Studies at the University of Southern California says, in his estimation, ISIS is the most odious group in international politics since the Nazis.

“They just want to convert or exterminate everyone,” he said. “What they want is one totalizing world. It’s a particular, perverted interpretation of Islam that tells them they are morally right to ignore borders and exterminate people or convert them. Those are the two options you get if they show up at your location.”

Unfortunately, this is the future of terrorism, James says, citing Nigeria’s Boko Haram as an example of how ISIS-like groups are already cropping up around the world.

“Think of it as a metastasizing cancer — a cancer that moves from one organ to another,” he said. “You won’t get rid of it until something big happens.” Something big like an Islamic reformation — though James is careful not equate ISIS with Islam, calling their violent ideology a bizarre perversion of the faith.

Sr. Marcelline Koch agrees and, furthermore, she says Christians have an imperative to partner with and support Muslims who are trying to counter radicalization. When she returned from Erbil, she met with a Muslim professor in order to better understand the situation.

In the meantime, she said she’s grateful for the Iraqi sisters who continue to minister to the people — both Catholic and Muslim — even in exile.

Related: We are displaced persons; we wonder what is next by Dominican Sr. Maria Hanna