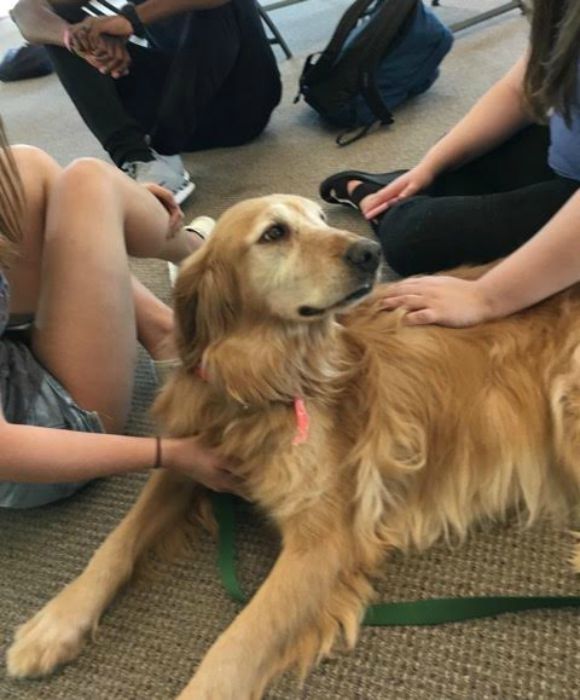 Recently, I met Barb, who rescues golden retriever dogs. She introduced me to Opal and Maddie, who had been rescued from puppy mills.

When she brought Opal to her home with 10 acres of woods and wildlife, this lovely golden only cringed in a corner and wouldn't venture outside. As Barb honored her space to heal, she simply waited for Opal to initiate a relationship.

It took several months of healing, and this week, Opal, was certified as a therapy dog; one of her first assignments was to comfort students at St. Charles Community College Missouri, in struggling with finals.

Maddie is still in a stage of non-relationship, except with Opal. The two goldens enjoy being outside, and Opal is teaching Maddie to trust a human being, allowing Barb to groom her, sit next to her, etc.

For anyone who has ever bonded with an animal, you know how sensitive, sociable and wise they are, often knowing us better than we know ourselves.

Another species of animal energy surprised my community on Good Friday, March 30, 2018.

A family of horned owls was nesting in an old oak on our School Sisters of Notre Dame campus in St. Louis. The juvenile appeared literally at our front door after Good Friday services, peering in at us — and causing us to wonder at her/his presence.

The parents coaxed the juvenile back into their tree, teaching it how to fly and hunt for prey. Even though horned owls are nocturnal, we saw them gracing our oaks during the day, sparking our curiosity regarding the timing of their appearance as well as the message they might have for us. Owls have lived on Earth for 70-80 million years, showing their ability to evolve, adapt and live in the "splendid community of creation."

Wanting to know more about owls, I turned to my trusted guide for animal wisdom, American author Ted Andrews and his book Animal Speak. Andrews said elsewhere, "When we learn to speak with the animals, to listen with animal ears, and see through animal eyes, we experience the phenomena, power and the potential of human essence." His book sold more than 500,000 copies and is now available as an e-book.

He inspired me to look more deeply at our family of horned owls and learn from their animal energy, writing that an owl may suggest "silent wisdom and nocturnal vision, healing powers, as well as death.

"The owl is a symbol of the feminine, the moon, magic, and darkness, of prophecy and higher wisdom." He adds, "To the early Christian Gnostics, the owl is associated with Lilith, first wife of Adam who refused to be submissive to him."

Andrews goes on to say that the owl has great vision and hearing. They can adjust in an instant from a telescopic to a microscopic focus.

Owls often appear when there is an abundance of rodents, their favorite food. At the same time, the great horned owl has a poor sense of smell and especially enjoys eating skunk. If a skunk enters your life, it symbolically teaches how to give, expect and demand respect. 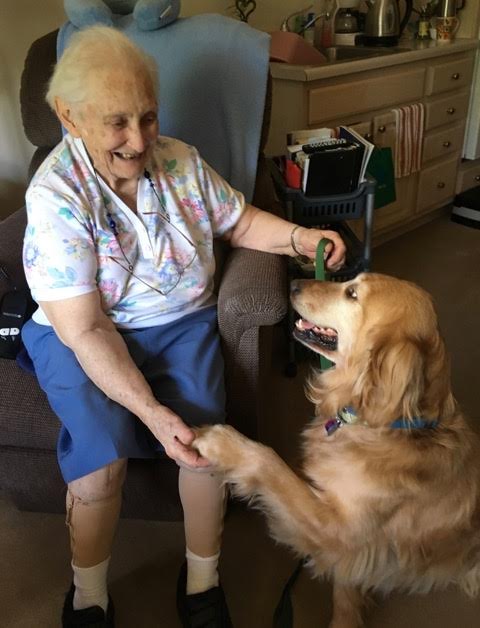 Pondering the creative presence of the horned owl, arriving on the day we remember Christ's crucifixion and death, led me to see if there was some kind of synchronicity in my life.

Coincidentally, I had just finished reading Creation and the Cross: The Mercy of God for a Planet in Peril. For most of my life, Sister of St. Joseph Elizabeth Johnson has been a trusted mentor in spirituality and has helped me build a bridge between the two.

She has sparked my enthusiasm for exploring another way to understand Jesus in contemporary society.

Drawing on her years of scholarly research, her latest book offers "owl wisdom" that demonstrate her desire to give us a way forward out of a Judeo-Christian context.

I miss a broader context of evolutionary understanding in her writing but appreciate her perspective.

Johnson spends a significant time looking at the atonement theology of St. Anselm, a Benedictine monk considered by some the father of scholasticism. St. Anselm proposed to his feudal society a change in understanding the coming of Christ into our lives. Anselm shifted from the concept of God's love as the reason for Christ's Incarnation (John 3:16) to one in which God, his Father, expected Jesus to pay back the debt incurred by original sin and personal sin.

Her dialogue with Catholic tradition (couched in a conversation with a university student, Clara, who is seeking the light), expressed my questions also, as Clara voiced her difficulty with a doctrine of atonement that seems to deny the mercy of a loving God.

This image of an angry father who needs the death of his beloved son to calm his anger toward the Earth community has bequeathed the human race a false image, very unlike the God whose love for creation inspired Dante to describe Earth as "Love's lovely planet."

This 1000-year old theory of atonement was never declared doctrine by the Catholic Church; yet, in instilling the fear of an angry vengeful god, it has done untold damage to animals and humans alike.

Over the years, others have tried to suggest a loving and merciful image, one more in keeping with the mission of the Jewish prophets — the call to live community, welcome differences, and care for the stranger. Among those have been several from the Franciscan community, such as Francis of Assisi, Bonaventure and Duns Scotus, as well as Joseph Ratzinger, to name a few.

I felt an inner spark of love being re-enkindled in Elizabeth Johnson's explanation of a new paradigm, a theory of accompaniment borrowed from Liberation theology and Isaiah 40-55: "Comfort, O comfort my people says your God." This is the God who accompanies, who walks with those in difficult situations. This is the image Jesus exemplifies in his life and journey to the cross.

Johnson's desire to offer enlightenment, especially to a younger generation, put a new emphasis on the importance of "doing theology" that gives hope and honors the Judaeo-Christian heritage many of us treasure.

It is in this context of "accompaniment" that God says: "For every wild animal of the forest is mine, and the cattle on a thousand hills. I know all the birds of the air and all that moves in the field is mine" (Psalm 50: 10-11).

She develops this love for all creation especially with her appreciation of Noah and the Ark where God treasures animals seemingly as much as humans, making every effort to save them. Thus the rainbow becomes not only a sign of God's love for humans but also for all creation.

Seeing Jesus as the compañera (partner) on life's journey, showing us the way to — as Paul says — "live, and move, and have our being" is the real message of the Scriptures.

I think the harsher theory of atonement is not a good description of the Divine Source of All Being, who has so generously created us, showing us how living "his" Way will probably lead to death, and hopefully, new life.

The "owl energy" of Elizabeth Johnson has spoken of her courageous hope to spark a dialogue within Christianity and deepen our response to animal wisdom. 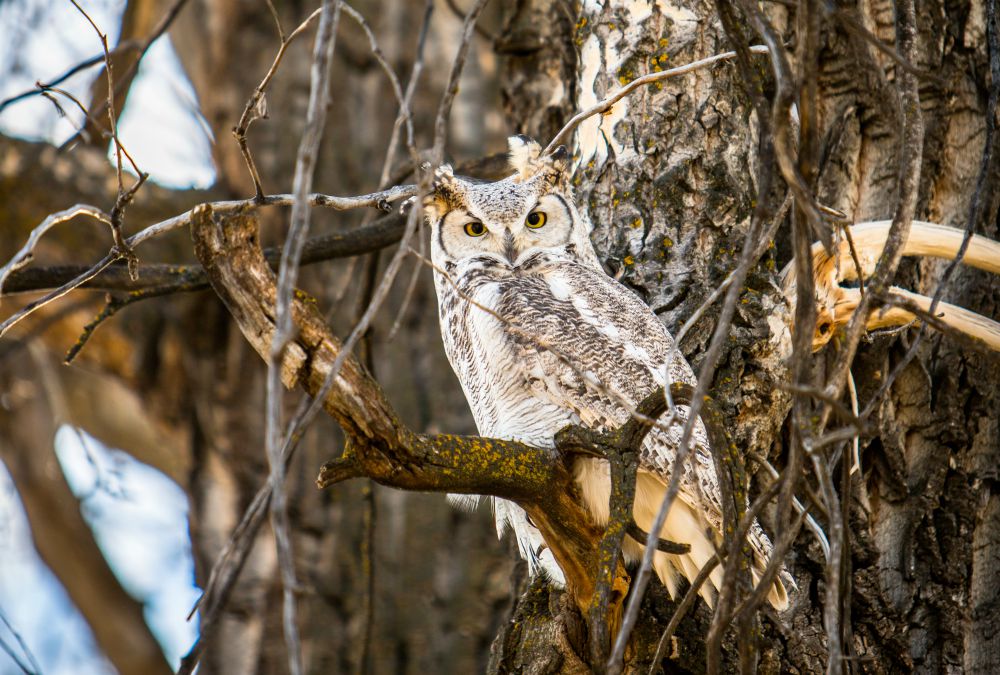 Strangers no more: Moving from fragmentation to wholeness

The lake lures me to pray