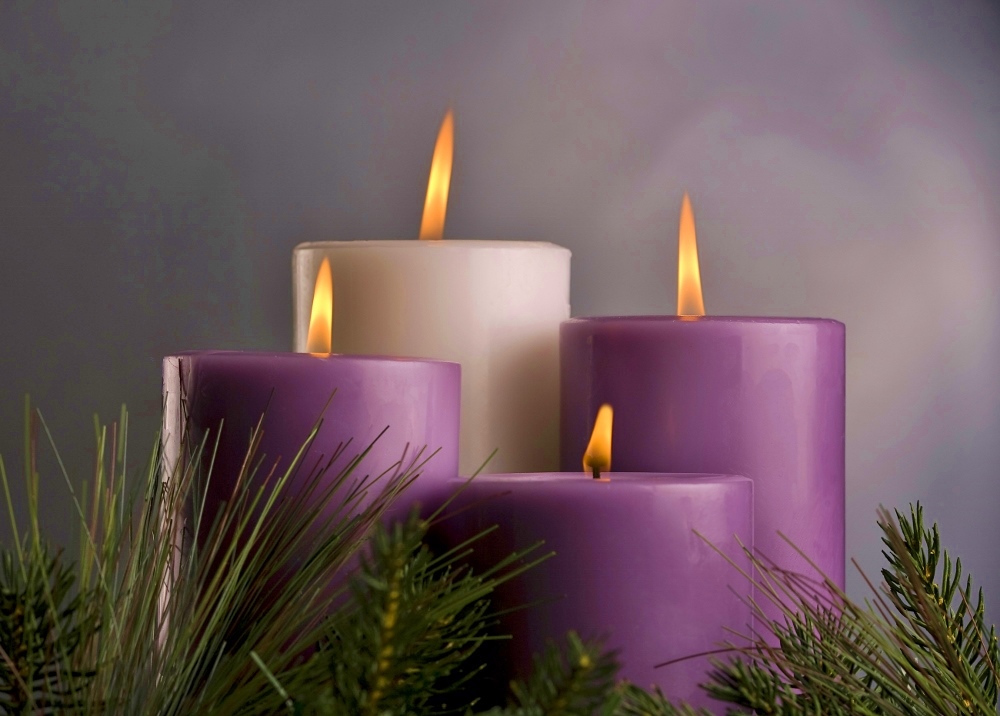 Advent, a season of joyful expectation before Christmas, began Nov. 29 this year, 2015. The Advent wreath, with a candle marking each week of the season, is a traditional symbol of the period. (CNS photo / Nancy Wiechec, 2009)

It was a crisp, sunny, December morning as I drove to the Washington Archdiocesan Pastoral Center for the annual Advent Day of Reflection. After checking through security, I entered the gathering space and picked up my folder. The room was filled with about 100 sisters, brothers, and priests, eager to be inspired by the speakers, share Eucharist together, reconnect with old friends, and meet new ones. I grabbed a cup of coffee and pastry, found an empty seat at a table near the speakers' stand, and settled in to listen.

Situated between the end of the Year of Consecrated Life and the beginning of the Year of Mercy, this Advent day seemed an ideal time for religious to reflect on the meaning of mercy. So I listened to two speakers share pious thoughts on the virtue of mercy.

"It's easier to show mercy than to receive it," one speaker said without explanation, as if it were a truism. Really? Now why would that be? I had to think a smidgen about this statement — more than a couple minutes' reflection time. On the one hand, it's true that in showing mercy, I can feel good about myself because I'm doing something virtuous. I can give myself a pat on the back subconsciously. I'm being magnanimous and benevolent.

On the other hand, it seems that, to receive mercy, I need to admit that I did something wrong or that I am not perfect. If I were flawless, I wouldn't need God's mercy. This "not being perfect" is something difficult to concede for people like me, a "1" on the Enneagram.

Now it's probably hard for all of us, in a culture that tries to convince us we are just right or, at least, not broken. Witness the amazing popularity of the self-help book, I'm OK – You're OK, by Thomas Anthony Harris. From its first publication in 1969, over 15 million copies have been sold, and it's been translated into more than a dozen languages. If we listen to this bit of pop psychology, we don't need mercy because we're OK the way we are.

But we do need mercy, God's mercy. As the Gospel stories show us, the recipients of God's mercy have their dignity restored, their wounds healed. The woman caught in adultery, Zaccheus and Matthew — the tax collectors, the prodigal son, the lepers. They all could hold their heads higher after receiving the mercy of Jesus.

To show mercy or to receive mercy? Does it really matter which is easier? No, I don't think so, but I also don't think we can show mercy if we've never felt and received it. My table companions agreed.

One participant voiced the question on the minds of many people of faith today, "What does mercy look like in a world where the fear of violence and bombing by the Islamic State [group] exist?" In the wake of coordinated terrorist attacks in Paris and a mass shooting in San Bernardino, how can an entire society respond with mercy? Where, they asked, does justice come in? Does mercy even make sense in this global life-threatening context?

Perhaps mercy means that each one of us needs to ask ourselves, "Why?" Why are people terrorists? Why do some young folks become hooligans? Why do individuals get addicted to drugs? Why are people crossing borders? Is it time to start asking "Why"? Is it time to have a national debate about social programs that can help to restore peoples' dignity?

I recall the 2006 shooting at an Amish School house in Lancaster, Pennsylvania, where five little girls were shot dead before the gunman committed suicide. The response of the Amish community was one of forgiveness, reconciliation and concern for the family of the gunman.

Similarly, this year a gunman on a shooting spree in Charleston, South Carolina, massacred nine people in an historic African Methodist Episcopal church. In the pain and grief of their losses, the community members did not turn to anger, but offered the shooter forgiveness.

What is the merciful response that will lead to peace at this time of immense fear? How can we be merciful as a society? I don't have the answer and neither did my table companions at the retreat day. But we agreed that our society will not be merciful until we, as individuals, learn to live the mercy that Jesus taught:

You have heard that it was said, 'Love your friends, hate your enemies.' But now I tell you: love your enemies and pray for those who persecute you, so that you may become the sons and daughters of your God in heaven. (Matthew 5:43-45).

Like watering a poppy, small actions can make all the difference