What's left, you wonder? I'll tell you what's left. What's left is something of which I'm deathly afraid. You likely use this frequently and think nothing of it.

But to me, a city bus is different from all of those. I have no idea how to get anywhere in a city bus. I simply don't understand how a city bus works.

Because I grew up in the suburbs and we used a car to get everywhere, I have no familiarity with riding the city bus. Which bus do I take? How much is the fare? How do you pay? What if you don't have exact change? What's a transfer, and how does that work? How do I know when to get off? My imagination runs wild. I get sweaty palms just thinking about all the unknowns with a city bus.

"Here, you take the $20 bus card and I'll take the $10 one," an environmental-champion friend tells me as she offers me the computer-generated fare card that she had expertly purchased at a kiosk. She and I are headed downtown for an event, and she's showing me the benefits of a no-car-but-bus-instead transport.

She responded, "No, absolutely not. I've got lots of these cards. I want you to have the $20. You've simply got to start riding the bus instead of driving." And with that, she kept the $10 card and pressed the $20 card into my hand.

When the bus came, I simply followed her lead. The doors opened, and we boarded. She inserted her fare card in the pay box, the machine deducted the trip value, and the card reappeared for her to take. I followed suit. Then we found open seats so we could sit next to each other.

I thought to myself, "Easy for you to say because you're a pro at city bus riding."

"How will we know where to get off?" I asked nervously, making conversation.

"See the cord all along the top of the windows? When you want to get off, you pull the cord, which dings the bell, and that signals the driver that someone wants to get off at the next stop. Easy."

Not to be assuaged so quickly, I responded, "And how do we know where the one stop in advance is?"

She pointed to a fairly large route map posted behind the driver. "See that map? It tells you where the stops are."

The ride was pleasant and uneventful, but that's because I had the assurance of being with a seasoned professional who was a comfortable bus-riding guide. We did get to and back from the event just fine. However, on the return trip, she told me to pull the bell cord, which I did hesitantly.

"Pull it hard," she admonished.

At last, the bell dinged, the driver stopped where we expected, and we got off the bus.

"Now, wasn't that fun? It's a new adventure. And just think — you have enough fare remaining on your card for a few more trips! Cut down on driving your car with all its carbon monoxide emissions. Riding the bus is better for the environment!"

Ah, yes, the environment. Being a faithful Franciscan, I understand the word "environment," so I dutifully put the active fare card in my wallet. That's where it still lives today. Untouched. Since 2016.

Fast-forward to a recent Friday morning. I'm a reader on the radio for the visually impaired, and my show starts taping at 6:20 a.m. I'm always early, but the badge reader to enter the building doesn't activate as early as I arrive, so I have a brief curbside wait. Week after week, this brief waiting coincides with bus-stop waiting by a woman named Josie.

We've become acquainted enough for me to learn that she takes the city bus to her job at a downtown restaurant, where Josie works the breakfast and lunch services. While she handles several duties there, including cooking, waiting on tables, cleaning, stocking items and checking supplies, her favorite job is being the cashier "because I love to talk to people."

In our few minutes of pre-dawn conversation one Friday, I asked Josie, "What's it like to ride the city bus every day?"

I thought she would tell me that she's done it for so long she could do it blindfolded or that the bus is very reliable and it always gets through no matter the weather. So I was totally unprepared for her answer: "What's it like to ride the bus? I'll tell you what it's like. It's scary."

Josie continued, "It's scary because there are really weird people who ride the bus. They're not in their right minds. Why, just the other day, some deranged guy attacked the driver. We were all scared. The fellow next to me called 911 on his cellphone, said what our next stop was, and requested the police to meet the bus there. And the cellphone guy did us a favor because the police were there to grab the guy. That whole thing was very scary. But Jesus was with me and protected me. I know it."

The most I could mumble was an "Oh, my goodness."

Josie went on: "There are so many people with mental health problems around us. But that's not you and me," she said as her bus arrived. "Wish me luck on this ride," she called over her shoulder as she disappeared into the bus, which whisked her away in a belch of diesel fumes.

Now for sure that bus fare card will stay a while longer in my wallet. Maybe permanently. Or I could give it to Josie... 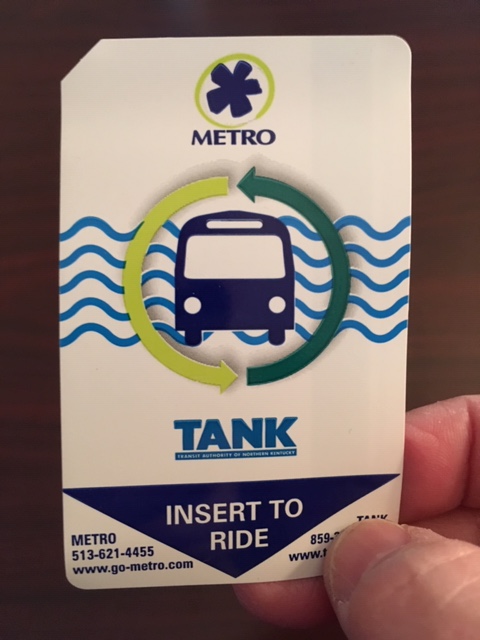