I am a student of Dante Alighieri. His insights about the destructive power of factionalism came home to me recently at a family meal.

The July 4th holiday brought home Ben, 25 years old and fresh from a year in London working on a master's degree in defense diplomacy and economic development, hoping to work for the State Department. He had brought his British girlfriend, Deana, home to meet the family. She is fluent in Russian, French and German and has a lovely British accent, which brought an international flavor to our meal.

Ben said to his father, who voted for President Donald Trump, "Dad, America is the laughingstock of the world because of our president."

His father's response was to take another helping of baked beans. He is pro-gun and skeptical of immigration. His life-size cutout of John Wayne, a hand on his six-shooter, guards the pool table.

Ben's stepmother, who voted for Hillary Clinton, suggested we all have more of the hash brown casserole, somewhat defusing the conversation as it continued to escalate. And this is when I remembered Dante.

How does Dante's wisdom relate to a family conversation about politics? His poem, "Divine Comedy," completed in the years before his death in 1321, gives clues about responding to our current political crisis.

Dante writes as an independent thinker. He sees the universe as the first book of scripture; choosing it as the context for his poem, he is able to move beyond the limitations of Catholic understanding. In his 100 cantos, he moves as a pilgrim through the Inferno, Purgatorio and Paradiso.

The recognition he desired for both his poetry and his political ideas led to his exile.

As a young man growing up in Florence, Italy, he was drawn into partisan politics, eventually being elected for a short term as prior of Florence, but an opponent backed by Pope Boniface VIII exiled him from the city for life.

In one translation of Inferno, Dante laments, "Midway in the journey of our life I came to myself in a dark wood, for the straight way was lost." The poem comes from his broken heart, reflecting what he had lost and how confused he felt.

If you have ever experienced something similar, you will understand Dante's pilgrimage, in which he asks questions that puzzle some of us today: How are we to live in our divided families, country and world? Is there a better way to govern wisely? How can factionalism be transformed into community? What is the role of the divine, by any name, in the right order of the universe? And how can I live at peace within myself?

Virgil, his mentor and "pagan ideal," leads him through the Inferno and Purgatorio, an afterlife alive with political and church leaders along with neighbors and friends that Dante had known.

As Dante meets politicians in the Inferno, he begins to recognize his own tendency to believe his way is the truth, discounting those who think differently.

As he goes deeper into the pits of hell, the consequences of factionalism are evident. Individuals no longer speak to one another, but only shout their rage, seemingly to the wind. Their loneliness is highlighted even as they seek news from family and home, inviting Dante and Virgil into conversation but never speaking to the neighbor standing nearby. Their isolation leaves them weeping bitter tears, unable to acknowledge their culpability for the choices that have led them to an Inferno of rage and violence.

Dante begins to reflect on his own political bias, his insistence that his party was the best party. This intransigence is challenged when he meets family members who feel the same about their families: The Faranata family is better than the Alighieri family. This defining of life in terms of "I'm better than you are," "My family is better than yours," "I'm a better poet than you are," all leads Dante to a slow recognition that perhaps one of the greatest dangers to building a strong society is factionalism.

By contrast, once he moves into the Purgatorio, he meets sinners who have owned their responsibility for poor choices and who recognize their need to ask for help. They are willing to hear another opinion and regard humility as a basic requirement for a society to address serious problems together. Those he meets there help one another and find they can hear opposing ideas with open hearts without becoming angry or defensive.

The importance of connecting to the natural world is evident as Dante leaves the icy darkness of hell and for the first time sees the stars. He refers to Earth as "Love's lovely planet." Here in the Purgatorio, he also recognizes the importance of art, beauty, music and listening to the silence of the spheres. This intimate connection with beauty becomes the bedrock for faith and respect for others.

Dante proceeds through the Purgatorio and enters the Paradiso, where he sees an inclusivity that was not known in 14th-century Florence: Popes had been in the Inferno, and Hebrew women were in the Paradiso. At this point, his guide, Virgil, completes his task and leads him to Beatrice, who will be with him on his heavenly journey.

We sense that Dante has seen his life revealed by meeting those who made similar mistakes. However, it is Beatrice who leads him to see that a life of humility can change one's situation from a tragedy to a comedy. Asking for help, living with integrity, learning to forgive — especially to forgive oneself — can be an antidote to exile and feeling alone.

Now, back to my family. I have learned so much by watching our blended families and folks living together outside of marriage. We have gay members whose lives we treasure, interracial and intercultural relationships, divorced members who are still a part of family gatherings, Catholics and those for whom the church no longer makes sense — and, certainly, those who see politics differently.

The dad in the previous story welcomes family members into his home, regardless of political persuasion. He stood by his wife as she went through cancer treatment.

The stepmom in the story has consistently used her skills in communication to build trust among all their children, offering a listening and nonjudgmental heart, modeling both "tough love" and lasting forgiveness.

Somehow among us, the value of family is a greater priority than politics. Someone said recently to friends who are strong supporters of our president, "Our friendship means more to me than politics, so let's not discuss it."

And above all, humor coupled with faith seems to help bridge the rocky road from factionalism to acceptance and understanding. It is the hard inner work of learning to listen without judgment that my family has been teaching me.

Besides the lessons I learned from my family, recently, I heard an NPR program that explored the neuroscience involved in changing one's mind. Could this be a Dante moment as I struggle to build and keep relationships while being bombarded with conflicting voices?

Dante placed heretics in the seventh circle of the Inferno, not because of their threats to dogma, but because they fueled factions that divided families and communities for generations.

Dante's wisdom trumps Donald by inviting him to do his inner work. Hopefully, he will receive the blessing Virgil gives Dante when he leaves: "Your will is free, upright, and whole. I miter you and crown you the ruler of yourself." 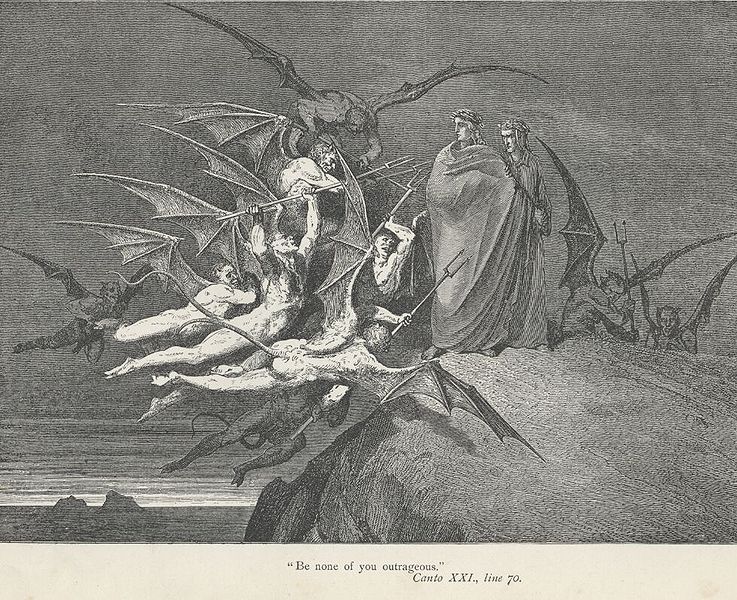