'The Dreaming' links with creation 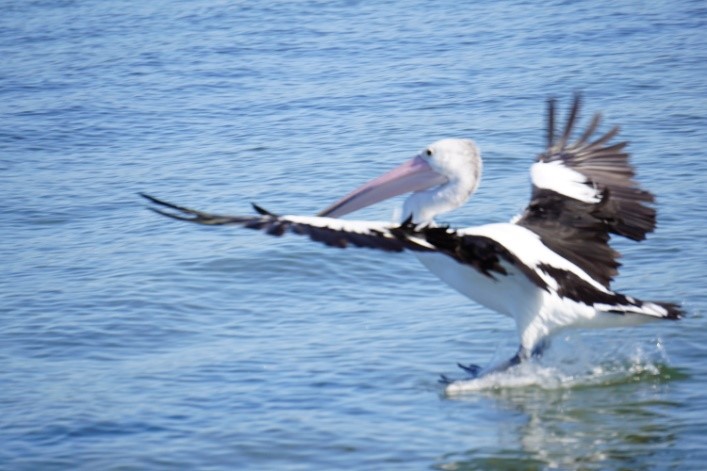 The Australian pelican has mythological significance for aboriginal people, and features in their stories and legends (Bryan S. Ricketts)

An extraordinary blessing of Australians are our aboriginal indigenous peoples, who have been here for about 65,000 years. These peoples cherish the Earth; their unique "Dreaming" spirituality reflects this. There is no English word which captures the essence of the "Dreamtime" of Australian Aborigines. "The Dreaming" is a better way to say it, as "time" is not in their languages, and the word expresses the concept of timelessness. "The Dreaming" is their timeless way of interpreting creation, relating to their ancestors, and passing on their knowledge, stories and laws for existence.

They believe that we do not own the land, but that the land owns us. In a country now raped by mines, oil drills and coal seam gas fracking, I believe that the voices of these traditional landowners, the aboriginal people, are among the few carrying sufficient authority to change this. They are drawing attention to the destruction of their land, their sacred sites and the many species endangered through unnecessary commercial enterprises.

They have a deep respect for the creatures of the earth, which is reflected in their dance — in which they often appear to take on the personas of particular animals. Their paintings, traditionally in the form of rock art, are often painted in ochre on cave walls and tell the story of their people, of the Rainbow Serpent, and of the Dreaming.

I dream the grace of waterfalls,

I dream the mountain's majesty.
I dream the sea and love the life it holds.

I dream of grace and beauty for all my friends.
Are there people who will dream my dream
Before my dreamtime ends?

My breath is nature's harmony,
My breath is spirits blowing free.
My family of creatures knows my sound,
And I breathe my grace and beauty in all my friends.
Are there people who can breathe with me
The sounds my spirit sings?

Imagine graceful waterfalls.
Imagine mountain's majesty.
Imagine all the life that's in the sea.
And you've only just begun to know my mystery.
Are you ready to explore my dream
Whatever it may be?

And when your spirit's broken down.
And life has no more majesty.
And the many lives I dreamed cannot be free.
Can you still be grace and beauty and free my friends?
Are you ready to create with me
Until my dreamtime ends?

Storytellers like other indigenous people with oral traditions, Aborigines have amazing myths and legends. Elders are generally the ones who pass on their stories to the next generations, and are greatly respected, as are their ancestors. Their smoke ceremonies and "message sticks" are used for significant events. Message sticks, with their carved, burnt or painted symbols, have been important in communication between aboriginal groups across Australia for thousands of years and are still part of cultural celebrations and tribal interaction.

The smoking ceremony is used on important occasions. On Jan. 19, 1995, Pope John Paul II beatified our first Australian saint, Sister Mary MacKillop. The long procession at the beginning of the beatification Mass was led by an aboriginal person who performed the smoking ceremony. I attended this Mass and was delighted that our Aborigine people were included so significantly in it. It helped make the celebration especially "Australian." 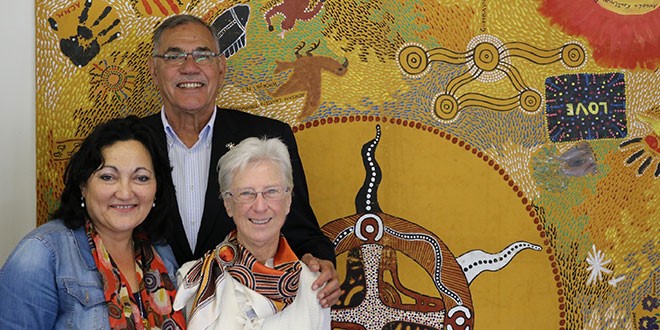 Sr. Kay McPadden, a Josephite sister, right, with Ravina Waldren and David Miller, is passionate about her ministry among Aborigines. Behind them is an example of aboriginal art. (Courtesy of The Catholic Leader)

These hunter-gatherer peoples suffered with the coming of Europeans who declared "New Holland," as it was then called, to be terra nullius — nobody's country. In fact there were several hundred tribes, speaking different languages, spread throughout Australia. Through frontier violence, the indigenous people were often killed and their lands taken. They were affected by imported diseases like influenza, measles and cholera. They were ignored in the Australian Constitution and had no voting rights.

Yet despite all this they survived and continue to survive, both in the bush or the city. Some engage in professions like administration, pastoral care, politics or police work. Others stay in the bush in "country," protecting their traditional lands and passing on their culture to their children.

While here in 1986 Pope John Paul II visited aboriginal peoples at Alice Springs, in the heart of Australia. He encouraged them in a memorable address:

And during all this time, the Spirit of God has been with you. Your "Dreaming" … is your way of touching the mystery of God's Spirit in you and in creation. You must keep striving for God and hold on to it in your lives. …

Your culture, which shows the lasting genius and dignity of your race, must not be allowed to disappear. Do not think that your gifts are worth so little that you should no longer bother to maintain them. Share them with each other and teach them to your children. Your songs, your stories, your paintings, your dances, your languages, must never be lost. …

Through your closeness to the land you touched the sacredness of man's relationship with God, for the land was the proof of a power in life greater than yourselves.

You did not spoil the land, use it up, exhaust it, and then walk away from it. You realised that your land was related to the source of life. …

You are part of Australia and Australia is part of you. And the Church herself in Australia will not be fully the Church that Jesus wants her to be until you have made your contribution to her life and until that contribution has been joyfully received by others.

Today, the church in Australia has grown in the realization that the presence of Australia's first peoples is an irreplaceable, unique, ongoing contribution. Significant church celebrations often begin with an aboriginal "Welcome to Country" prayer and/or smoke ceremony. A number of Australian religious sisters, in their ministry, engage with aboriginal people and raise our consciousness regarding their importance to this country.

As a Catholic Celtic Australian woman, I know that I need to enrich my own spirituality by embracing my Celtic spirituality, which has to do with a love of creation and an awareness of God present in all things and all places. My spirituality also has to be grounded in that of this great southern land of the Holy Spirit; it will grow with my understanding of the spirituality of its Aborigine people. As I realize more that the land does not belong to me, that I belong to the land, I will grow in understanding its Dreaming.

Spirituality | 'The Dreaming' links with creation

The Lenten journey is the journey home