The days of the Christmas season are an enchanted time of the year. A white bearded gentleman dressed in red oversees his workshop where elves toil unceasingly to fulfill the wishes of humans on that magical night of Dec. 24. A sleigh led by a reindeer with a red nose glides through the snow-laden sky. O to have the eyes and heart of a child to behold these wonders!

We grownups support and encourage the childhood dreams. We write letters to Santa for the children telling in great detail their desires for gifts, and leave cookies and milk for that jolly old man who — despite his girth — makes his way down the chimney into our homes. We sadly know that the naiveté of childhood will wake up to real life all too soon.

And yet, to be honest, don't we grownups have dreams and expectations about life? Looking into our future, don't we imagine how this or that will make us happy and fulfilled? More often than not, our achievements fall short of our desires. In this life, is our hunger for wholeness, for completeness, to remain frustrated forever?

Teilhard de Chardin, who served as a stretcher-bearer for the French army during World War I, wrote to his cousin Marguerite on Dec. 24, 1915, "I must tell myself, and I think I'll come to feel it, that no Christmas night will ever have meant more to me than this one I am about to spend on the straw this evening, by the side of men."

The Incarnation was a pivot about which the whole of Teilhard's spirituality revolved. On that Christmas Eve, perhaps, the words from a well-known Christmas carol were recalled:

The Incarnation solidified Christ's cosmic connection with all of creation, a cosmic reality through the flesh of Christ: a cosmogenesis. Teilhard, in his reading of St. Paul's letters to the Ephesians and Romans, interprets Paul to literally mean that we are all members of Christ's body and members of one another, related by the flesh, in whom we live and move and have our being.

There are myths that tell of the love of a god for a human motivating him or her to give up the prerogative of immortality in order to be the companion of the human in earthly life, and then to suffer death. In The Lord of the Rings, for example, the elf Arwen, daughter of Elrond, lord of Rivendell, chooses to marry Aragorn who is the descendent of Isildur and rightful heir to the thrones of Andor and Gondor.

But the Incarnation is no myth; it is a reality of faith. The reality of God's love for the world.

When we celebrate the Eucharist, we celebrate a true cosmic liturgy. The Eucharist is a sacrament that effects what it signifies. By the words of consecration, "this is my body, this is my blood," the bread, the work of human hands, and the wine of human suffering become the body and blood of Christ offered to God in praise, adoration and thanksgiving — restoring, not humankind alone, but the whole of the cosmos, to the eventual fullness of being in Christ at the end of time.

The body of Christ both is and is becoming in earthly time, a Christogenesis. We are participators, co-creators as it were, in this endeavor. This is something different from the Olympics model of "higher, stronger, faster." When our action is motivated by grace, it builds up a true body, that of Christ, who wished to be completed through each one of us.

In The Divine Milieu, Teilhard writes, "Each one of our works, by its more or less direct impact it has upon the spiritual world, helps to make perfect Christ in his mystical totality." And from Hymn of the Universe, "God is, in a sense, at the point of my pen, my pick, my paint-brush, my needle — and my heart and my thought."

Whatever setbacks and diminishments we suffer carry on the healing, restoring work of Christ. Living a life of faith and trust in Christ gives our lives a meaning and purpose that is everlasting.

Grownups' desire for lasting happiness, for wholeness, does come true! A thrill of hope echoes through the world on Christmas Eve, a weary world rejoices. God tells us gentlemen and gentlewomen to rest merry.

And so we pray: 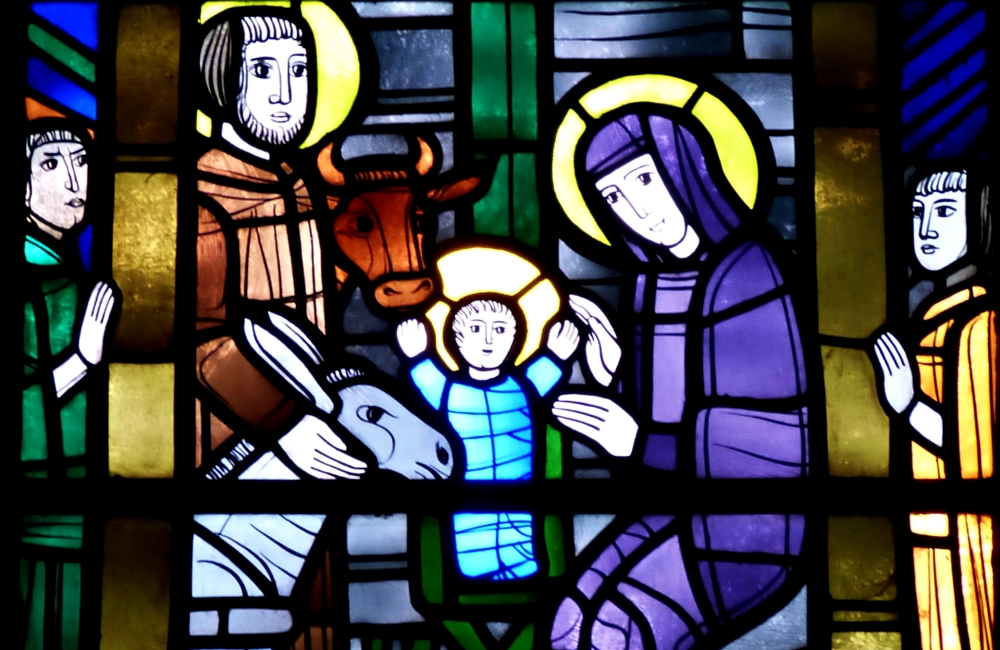