It only took 50 years to learn 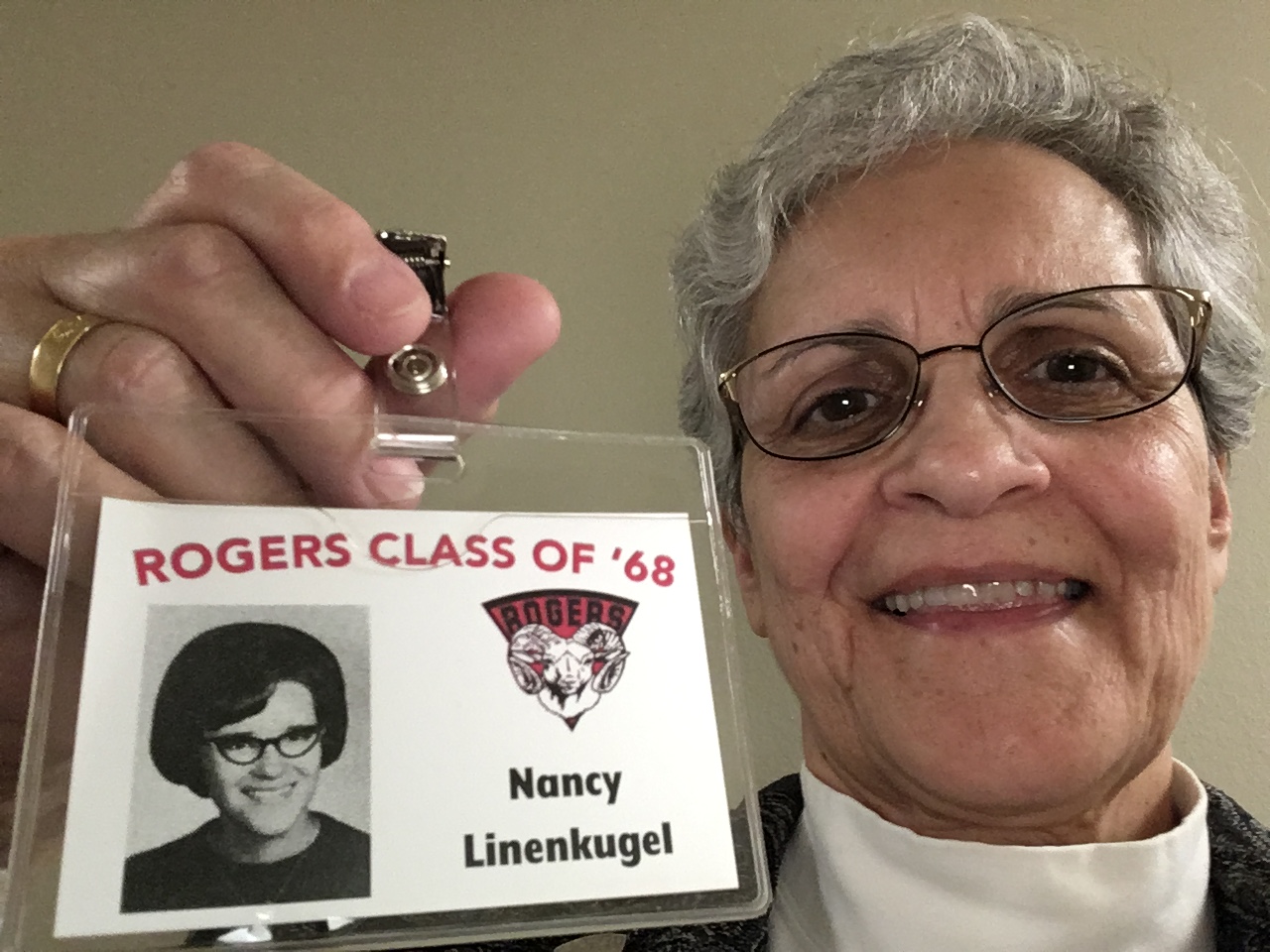 Can anything holy come out of a public high school? I’ve used that phrase lots of times over a lifetime as a nun. It sounds unusual to many that I went to the convent after graduating from a public high school, but preface that with eight years of Catholic elementary school and you understand my religious foundation.

It was in the second grade. We Catholic school kids had to have paper book covers on all our textbooks, as opposed to friends from the public grade school who toted hardcover books in their hardcover glory. Our books all looked alike, thanks to paper covers provided by a local funeral home. The covers were filled with ads from local businesses that surrounded the large center area, "Little Flower School, Toledo, Ohio, conducted by the Sisters of St. Francis of Sylvania Ohio." I always wondered how sisters conducted a school.

Anyway, those ad-based covers were plentiful and we put them on every book. As the school day went along and the subjects changed, we just switched books but looked at the same old covers. When each book was open on the desk, the flaps covering each end slid out a bit so that the messages on the flaps were visible. The right flap had this large message: "Are you listening? Maybe God is calling you to be a priest, brother or sister!"

So every day and all day in school, I saw that vocation message no matter which textbook was open in front of me. One day in the second grade I clearly remember closing my eyes and thinking, "OK, God, I'm listening. Are you calling ME to be a sister?" Of course the answer was yes. It couldn't have been anything but yes. God said so. And that's what I've been carrying around in my head ever since.

Attending a public high school was just a matter of necessity. The area Catholic high schools weren't located close to the suburb where I grew up and, with no bus service, I just couldn't expect my mom to drag out five younger siblings in the car every time I went to school. The public school bus came right down our street. End of discussion.

Last fall in 2018 our Toledo, Ohio, high school class of 1968 gathered for our 50th anniversary of graduation. From a graduating class of about 500 students there were about 150 classmates who showed up with spouses.

Each attendee received the obligatory reunion name tag with our name in large print plus our senior class photo. Many of us were recognizable by our photo; for some classmates we required the printed name due to their markedly changed appearance, including persons with canes and walkers and varying degrees of gray hair (or no hair).

The evening allowed ample time to socialize. "Who's that guy you were talking with just now?" a vintage girlfriend asked. "Oh," glancing in that person's direction who had since moved on, I said, "That’s (name).  Remember him? He played football."  Aghast, my friend said, "Really? What are you doing talking with one of the popular kids?"

We finished our conversation by flowing to other topics, but that verbal exchange stayed with me.

On the long drive home to Cincinnati I thought about how I had enjoyed the socializing time with a variety of classmates.

In high school I wasn’t a cheerleader, a class officer, on student council, a volleyball star, or part of the popular group. We referred to them as "soc's," pronounced so-shuz, meaning "socials." I was simply a good student, a proud four-year member of the Junior Classical League and president of the band. I gravitated to friends having the same interests, and every day for lunch many of us sat at the "band table" to hang out with fellow band members (whom we saw daily anyway). There was safety in that. We had our own identity and made our own popularity by welcoming each other to join as the lunch periods changed and we came and went from the lunch table. We had a good thing going and we weren’t concerned about status.

The vintage girlfriend mentioned above found a seat at the reunion and hardly budged. She was disappointed that I didn't stay with her; she was alone because her husband couldn't come. But I figured that this 50 year reunion might be the last time I'd see folks so I wanted to make the rounds and make the most of the evening.

I was actually proud of myself for how I was totally present at this event. I went up to every person I could in order to say hi and get reacquainted. Many were persons I’d never  have approached back in high school, let alone engaged in a conversation. But 50 years later things were different. They were so much different.

At the reunion we weren't football stars or cheerleaders or class officers or popular couples at a dance or invisible persons on the edge of activities. No. Now we were all just same-level persons who had a similar high school experience as our common bond. In a very real way, we were now equals.

We all represented individual lifetimes of educational pursuits, careers, marriages, children, travels, jobs, hobbies and health. Any of us was just as worthy as the next. What a fabulous concept.

After dinner I continued roaming around the room, chatting with anyone and everyone. Actually, I became someone desirable that others sought out. "Weren't you in a convent once?" asked a fellow in my geometry class. "Yes," I readily replied, "and I'm still there. I’m still a nun." The wide-eyed classmate responded, "Cool. And you still look a lot like your nametag picture, so that means your nun-liness must agree with you."

Another classmate interrupted — this time a gal who took four years of Latin with me. She said, "There's something so calm about you. You don’t seem worried or frenzied like the rest of us. How do you do that?"

I just listened, smiled, tried to adopt a wise-woman stance, and said, "We're all called to something. When there's a good fit you just know it." She thought about that for a moment and said, "Yeah, you're right. Now where were you when my first marriage didn't work out? I shouldn’t have married Joe."

We lightened up the conversation by recalling a Latin memory. I said, "Remember that one Saturday afternoon in downtown Toledo? We went into stores together as shoppers but conversed like foreigners. We kept using the first six lines of Virgil's Aeneid that we had to memorize in Latin IV." Immediately she grinned and said, "Oh, boy, that was fun." We would walk into a store, one of us would say loudly, "Arma virumque cano, Troiae qui primus ab oris." Then we'd pick up an object, examine it, and point to features saying, "Italiam, fato profugus, Laviniaque venit litora, multum ille et terris iactatus et alto …"

Other shoppers leaned in to listen more closely to figure out who we were. Then once we got outside we shrieked with laughter before repeating this at other stores. She mused, "And who ever said that four years of Latin didn't get you anywhere?!"

We went to get our picture taken together at the reunion photo booth, hamming it up differently for each of the four poses. The strip of photos emerged out of a slot, just like at the old Kresge's store.

All evening long I spoke with previously unapproachable classmates. Sports stars today bore sports injuries from those glory days. Popular and beautiful ones may have endured years of unhappiness in love. Some seen as "likely to succeed" have taken early retirement and are now bored and unfulfilled in daily life. Quiet, overlooked ones are solid citizens. But many found their life "fit" early on and continue to be happy.

My take-away was exhilaration. I’m just as successful and accomplished and happy — and possibly more so — as my high school classmates. And it's wonderful to meet and enjoy the persons we are today, which is way beyond what we 14-18 year olds were in high school. Way beyond. And how beautiful to appreciate each classmate in a new way. Deep down we're just people with an eternal bond. It only took me 50 years to discover that.

Spirituality | It only took 50 years to learn