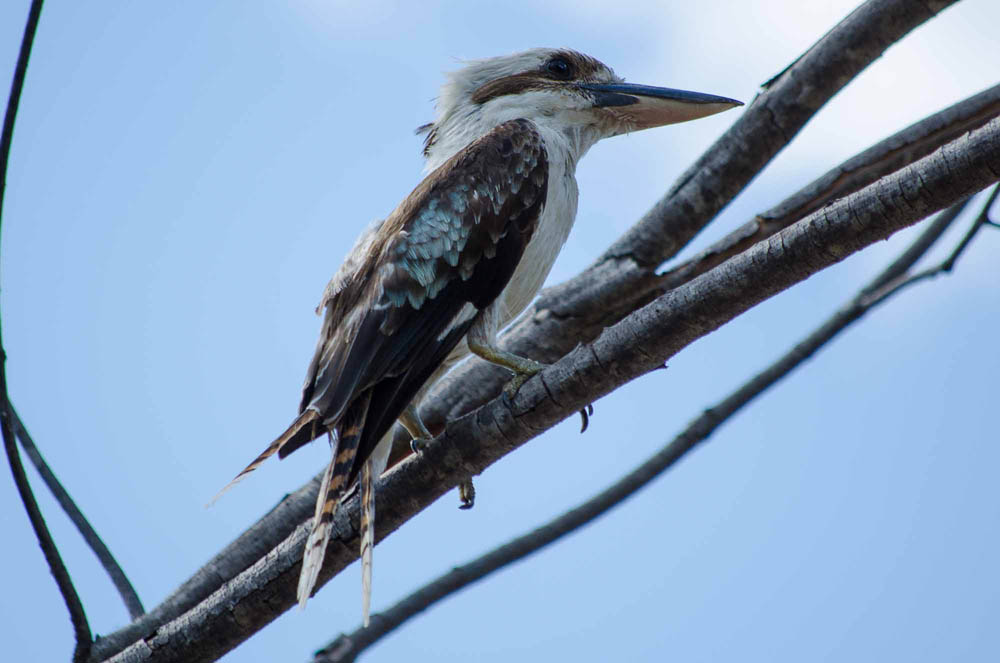 An old Australian folk song I learned in third grade begins, "Kookaburra sits in the old gum tree, merry merry king of the bush is he."

Recently being reminded of this song, I asked the sisters in my local community if they knew it. Since they did not, I sang it for them, inclusive of all three verses in which the kookaburra (a bird native to Australia and New Guinea, named for its unique, cackling call) sits in the gum tree, eats gumdrops and counts monkeys.

(Prose does not do the song justice; I recommend these links to YouTube to learn the song and to listen to the call of the kookaburra.) Little did I know that the kookaburra would teach me a lesson a few days later.

On Monday of Holy Week, my Uncle Frank died at the age of 86. Although he had been living in California for over 50 years, he was still fond of the delicacies of his native Pennsylvania, especially Tastykakes. Wanting to share some of "Frank's Favorites" with family and friends after his funeral, my California cousins were in need of a shipment of Tastykakes, as they are not sold in California.

When online shopping proved fruitless in getting them the exact product they needed on time, the call went out to East Coast relatives: Would anyone be willing to purchase and ship Tastykakes? Because my schedule was going to prohibit me from attending the funeral, I was happy to volunteer to contribute in some small way during my cousins' time of grief.

Since their idea took root on Holy Saturday and the "goods" were needed by the time of his funeral the following Saturday, time was of the essence. So, during the afternoon of Easter Sunday, I set about buying up all the Tastykakes I could find at every convenience store within a 15 mile radius of my New Jersey home — in all, 115 packages.

However, Easter Monday brought a nor'easter storm with snow that made travel hazardous. Because of the worsening weather, I decided to entrust the package to the nearest shipping point — the post office a mile from our convent.

As I hoisted the 28-pound box onto the counter, the postal clerk informed me that overnight shipping could not be guaranteed because of weather-related restrictions on flights at the airport. I could still pay for expensive overnight shipping, but it would not be guaranteed to arrive by the next day. She recommended sending the package using priority mail, which would delay the package by only one day, still in plenty of time for Saturday's funeral.

Looking out the window at the snow that was still steadily falling, I considered taking the box to FedEx or UPS, each several miles away. In the end, I chose to use the methods available to me at the time — priority mail and prayer.

It turned out that lots of prayer was needed. Through the modern wonder of tracking numbers, I could verify that the package made it to Los Angeles by Wednesday, where it went from building to building, finally settling in a "distribution facility." On Thursday morning, the package remained there, as it did at noon, in the evening and at bedtime — and during the hundreds of times I clicked on the tracking information in between.

Since the package was not at the local post office by then, I was convinced that there was no way it would be delivered by Friday in order to be taken to the funeral on Saturday morning.

I had begun to admit my failure to those closest to me. Not only did I admit it, I dwelled on it. Why didn't I just pay for the overnight shipping and hope for the best? Why didn't I go to another carrier when the Postal Service couldn't meet my needs? How could I not come through for my uncle and my cousins?

My obsession with this failure became an annoyance to those around me, who attempted to assure me that I had done all I could. I responded by continuing to click on the tracking app several times an hour.

Finally, one of the sisters in my community had had enough of my obsession and fabricated a story: What if you had chosen a better delivery method? What if, when the package was in the delivery truck, one of the truck's tires blew out, spilling its contents on the side of the highway? Further, what if a flock of hungry kookaburra came by, filling themselves with the discarded Tastykakes and carrying the rest of them away to share with their friends?

Her point was that this story was just as ridiculous as my thinking that I had any control over the package I had entrusted to the Postal Service four days ago. She encouraged me to be at peace with the fact that I had done my best.

I immediately regretted having introduced the kookaburra to her, but I had to admit that she had a point. Constantly worrying, checking the tracking history and berating myself for not doing better was not bringing me peace. I had to let go of something I had no power to fix.

So I tried to replace my ridiculous obsession with the equally ridiculous image of a flock of Australian birds pecking away at Butterscotch Krimpets and Peanut Butter Kandy Kakes on the side of a California highway. That image made me laugh out loud at my own ridiculousness.

Then I thought of Matthew 6:26: "Look at the birds in the sky; they do not sow or reap, they gather nothing into barns, yet your heavenly Father feeds them." Between the kookaburra and the "birds of the air," I was being reminded that the more control I seek (especially about those things over which I have no control whatsoever), the less trust I have.

I had to choose between the ridiculous and the real: I could continue with the illusion of control by constantly clicking on tracking numbers or I could trust that I had done my best and accept that that was good enough.

Even Jesus would agree, as he concluded his "bird discourse" by reminding us of the ridiculousness of worry: "Can any of you by worrying add a single moment to your lifespan?"

It would make for a great story to say that these revelations brought me peace. However, I continued to dabble in the ridiculousness of worry and the illusion of control by constantly checking the tracking information online. I remain a work in progress.

What about the Tastykakes? They arrived at the local post office on Friday, where my cousin was able to pick them up before they were loaded onto the next delivery truck. They were added to the gift bags of "Frank's Favorites" and distributed after Saturday's funeral. My constant worry and my ridiculous attempts to control the uncontrollable added absolutely no value to the process.

Rest in peace, Uncle Frank, secure in the knowledge that no kookaburra took hold of your Tastykakes on the side of the road. After all, that would be ridiculous!

[Ann Marie Paul is a Sister of Christian Charity from Passaic, New Jersey. She is director of the Passaic Neighborhood Center for Women, a collaborative ministry of the Diocese of Paterson, New Jersey, and its religious communities.]

You don't need a television Christmas to celebrate Christ's birthday

'It was the women who stayed'

Hold nothing of yourself back