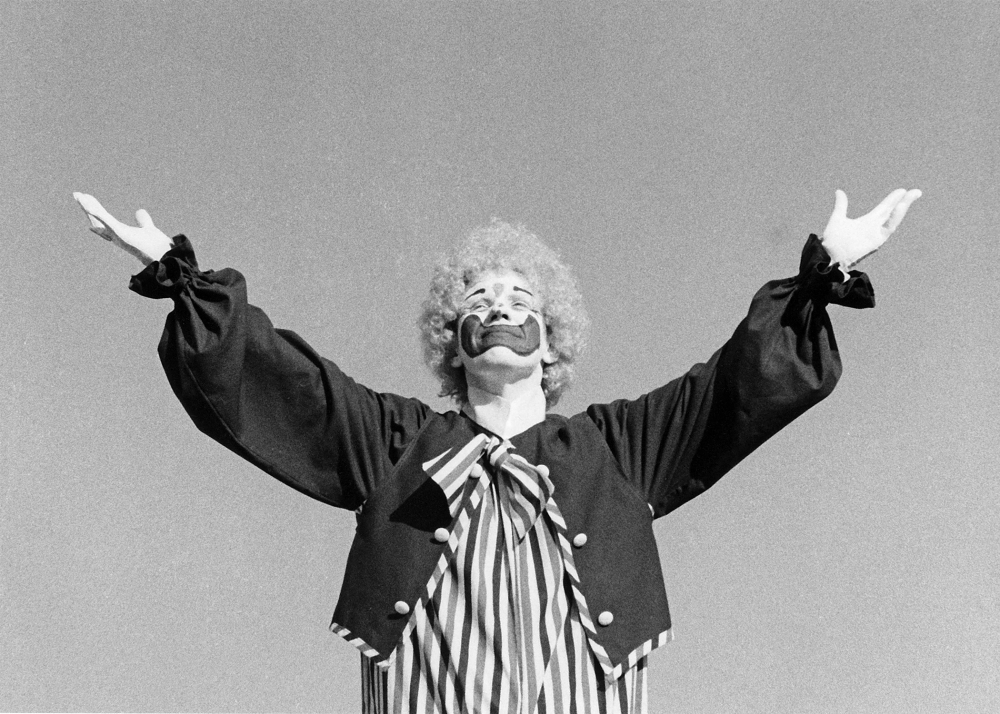 A little Madness in the Spring
Is wholesome even for the King.
But God be with the Clown —
Who ponders this tremendous scene —
This whole Experiment of Green —
As if it were his own!
—Emily Dickinson

I had a notion to rest in the newly-arrived experiment of green.
That's when the happy ideas started.

I had the happy idea to pipe Gabriel Faure's "Sanctus"
throughout the neighborhood.

I had the happy idea to open the "Happy Idea Café" and serve happy meals.

I had the happy idea to say hi to my mom and dad in the cemetery.

I had the happy idea that Jesus was hiding in the nearest bush
and that it would burst into flames
and I'd have to take off my shoes to approach.

I had the happy idea that a clown stood on the roof of the retreat center. Her arms were raised in praise.

I had the happy idea to take only right hand turns
and at the end to leave bunches of tiger lilies.

Then I remembered left-handed people and had the happy idea
to take only left hand turns and at the end to leave daffodils.

I had the happy idea to remove all the pictures in my home
and hang happy frame designs all over the walls.

I had the happy idea that people were talking in the empty frames.
They said, Happy to meet you.

The next morning I rose early and headed to Church.

The choir at All Saints is prayerful, if not always on key. Today the soloist wandered in a wilderness of notes. Finally, she slid mightily and landed brilliantly on, "I surrender to Jesus."

The choir blasted away at the prayer she had found, and the roof slid off the church. This started the whole world sliding.

In the garden outside the church, soft rain slid down rose petals into the earth where roots were laughing and growing.

Out on the diamond a baseball player slid flat out in a cloud of dust, until his outstretched hands touched home plate, safe.

At the nursing home nobody walked; they slid, slowly, down long halls.

On the dance floor the lines moved in unison, first in one direction, then in another, greasing the boards with the electric slide.

At the park, children slid through twists and turns and splashed merrily into pools of water.

All the backsliders clapped and cheered because we knew that in the end, no matter life's twists and turns, its grit and dust,
we will, with outstretched hands, slide home.

And it will be merry. It will be electric.

Spirituality | A little madness in the spring

Web of Life: closing the circle

Gratitude: a gift from the heart

Q & A with Sr. Mary Ellen Francoeur, 'living contemplatively in the universe'

My mum's belief in me