A date in 2019 may easily go unnoticed, but I won't forget it. The date is June 12, the 90th birthday of Anne Frank, who was born in 1929. On her 13th birthday, she received the now-famous red-checked diary. Her parents knew she was an aspiring writer and figured that the blank diary would be a good starting point for her.

The world is replete with teenage diaries. I had one and so did you. What did we write on those crisp, blank pages that were always ready to receive our deepest wisdom? I have an old diary from when I was 12: I wrote about school, about coming up with the name for our sixth grade service club, about Girl Scouts, about accordion lessons, about grandparents bringing us souvenirs from a trip, about getting new glasses, about helping mom with a new baby — and much more. For sure, though, nothing I was doing as a teenager was anything like the ordeal Anne Frank and her family endured during their two-year captivity hiding from the Gestapo in the "Secret Annex."

Today we have Anne's diary to tell us what it was like. A little-known fact is that her father, Otto Frank — the only family member to survive the war — did not want to publish her diary at first. He felt that the contents were too personal and, well, boring about everyday life in hiding.

How do I know this? He told me.

On July 31, 1975, my high-school-age sister accompanied me to Switzerland where we got to spend a day with Otto Frank and his second wife, Fritzi, at their home in Basel. It was one of those once-in-a-lifetime opportunities; Otto passed away just five years later in 1980 at age 91, and Fritzi died in 1998.

It started as an innocent question by one of my eighth-grade students as we were studying an excerpt from The Diary of Anne Frank in 1974. One of the pictures showed an emaciated group of concentration camp-clad prisoners trudging out of Auschwitz at its liberation in January 1945. The caption was something like, "These prisoners were freed by the Allied Forces and Mr. Frank could have been among them; he is still alive today and is living in Basel, Switzerland." A student asked: "Is Mr. Frank really still alive?"

The Auschwitz liberation had occurred 30 years before; what were the odds that someone who endured the hardship of a concentration camp could still be alive?

Where could I find the answer about whether Mr. Frank was alive, or whether he had perished as just another casualty among the Jewish people? Today I'd only have to check the internet on a cell phone, but 45 years ago we all relied on a tried-and-true, old-fashioned method of research: Go ask the librarian. And ask I did. There happened to be a branch city library location just down the street from school, so I posed my question to the research librarian. "Is Mr. Frank still alive?" I even took the reader to show her the picture.

True to form, she instantly thought of a few fingertip resources to check, but none yielded the answer. Finally she sagely suggested, "Why not write the publisher of the Diary? They would certainly know if Mr. Frank is still alive, so maybe you can find out that way."

So that's exactly what I did. I wrote to the publisher, Doubleday, and because I didn't hear anything very soon I promptly forgot about it and went on to other things. But then on December 17, 1974, I received an air mail letter on thin onion-skin stationery. The letter was addressed to me, Sister M. Gilbert (my then-religious name), and the return address just said "Schweiz" but I had no idea what that was. I opened this letter carefully (instead of my usual rip-it-open-with-the-edge-of-my-crucifix method) and I couldn't believe my eyes. The letter came from Otto Frank himself!

Here I was thinking that it might be a dead-end to write to Doubleday, when in truth they had done the most wonderful thing of all: They forwarded my letter directly to Otto Frank. Indeed he was very much alive and, incredibly, found time to write a letter back to me.

We now knew that Mr. Frank was alive and was really living in Basel, Switzerland. Teaching eighth-grade language arts gave me the perfect opportunity to assign the students to write to Mr. Frank and ask their questions. The students were satisfied and went on to other things.

But I couldn't let go of this connection with Otto, so he and I corresponded many times over the following months. I had an opportunity to visit him the following summer, and my sister Marrianne — a high school sophomore at the time — accompanied me. On the appointed day, we took the train from Zurich to Basel, about an hour away. Otto (then age 86) met us at the station, walked us to a street car, and escorted us through his neighborhood to his home. Fritzi (then age 70) had lunch waiting for us.

We had plenty of time to enjoy conversation on a broad range of topics. Otto had not wanted nor intended to publish Anne's diary, but the Secret Annex helper Miep Gies had retrieved Anne's writings from the ransacked apartment following their capture. Otto had forced himself to read Anne's pages and quickly realized the importance of her diary in many contexts — historical, societal, familial and personal. Otto agreed to publish the diary in 1947. Due to the Diary's popularity, Otto took as his life's new work to spread Anne's ideals. "Do not hate, do not hate, do not hate" became his mantra.

In appreciation for his kindness in hosting Marrianne and me that July 31, 1975, I had made a copper tooled Magen David for him and Fritzi. The copper pieces contained sayings and images from Anne's writing.

Later in the afternoon, Fritzi and Otto took us on a walking tour of Basel, and my dad's borrowed camera went into overdrive as it recorded many beautiful images. The most haunting was this picture of Otto and Fritzi looking across the Rhine River toward Germany.

Following our walking tour, Otto and Fritzi took us to the train on time and sat with us onboard until it was time for us to leave for Zurich.

So The Diary of Anne Frank has literally brought the world together. Happy 90th birthday, Anne. And thank you. You live on in ways you never dreamed possible. And world citizens are better for reading what you wrote. 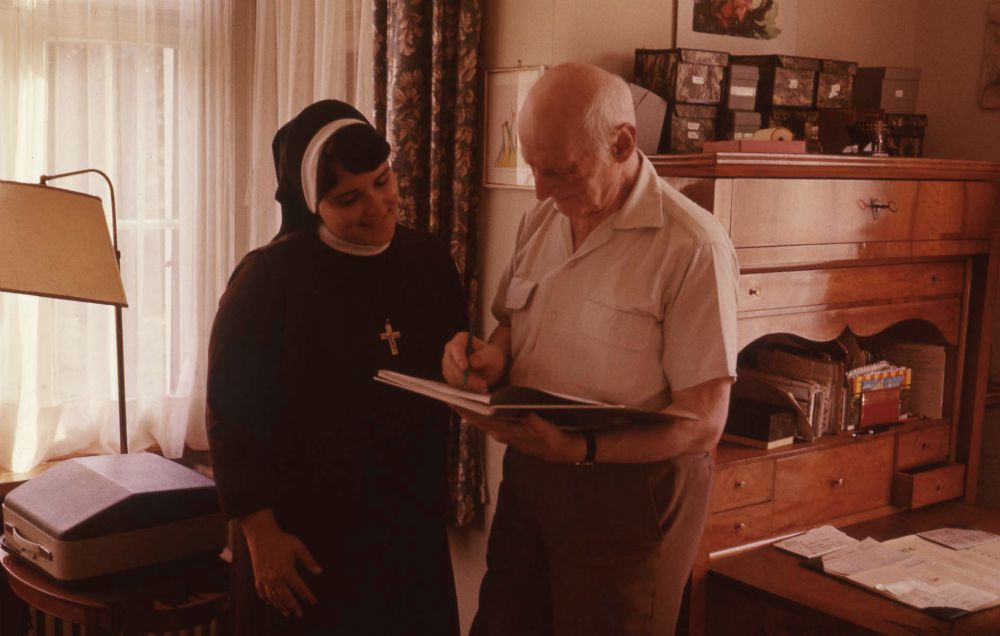 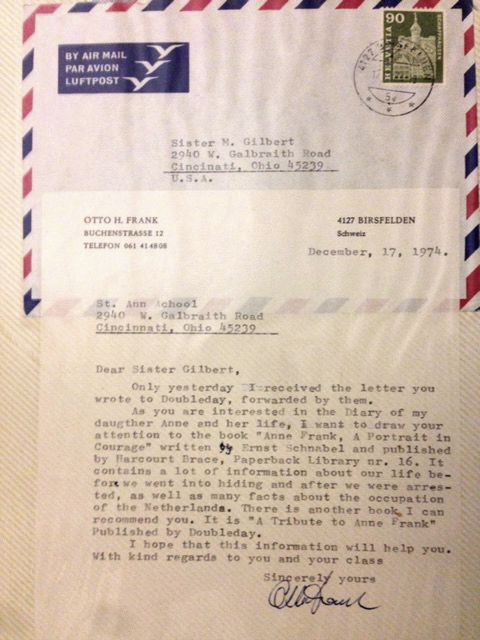 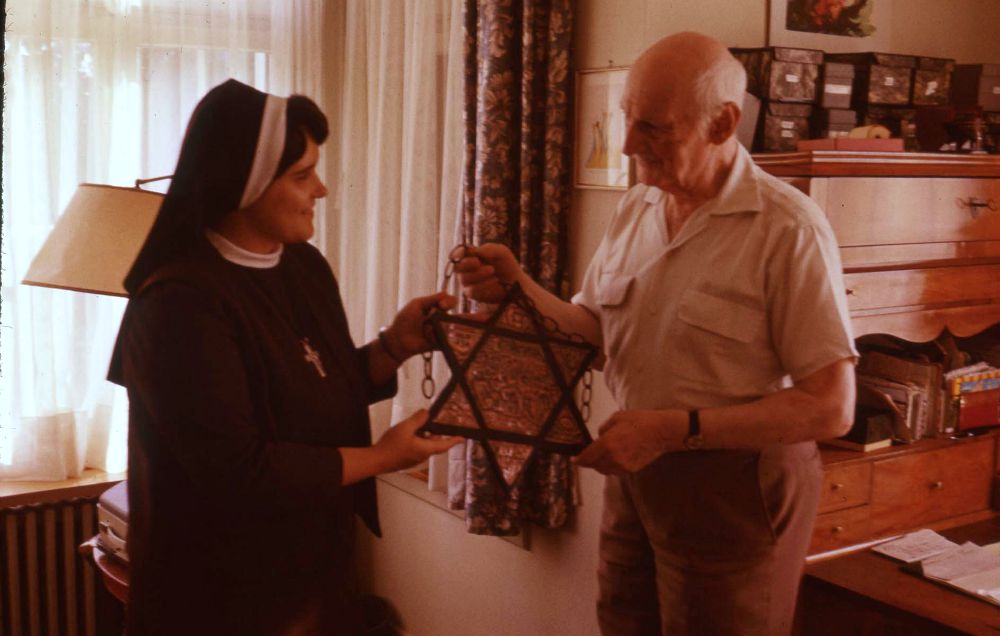 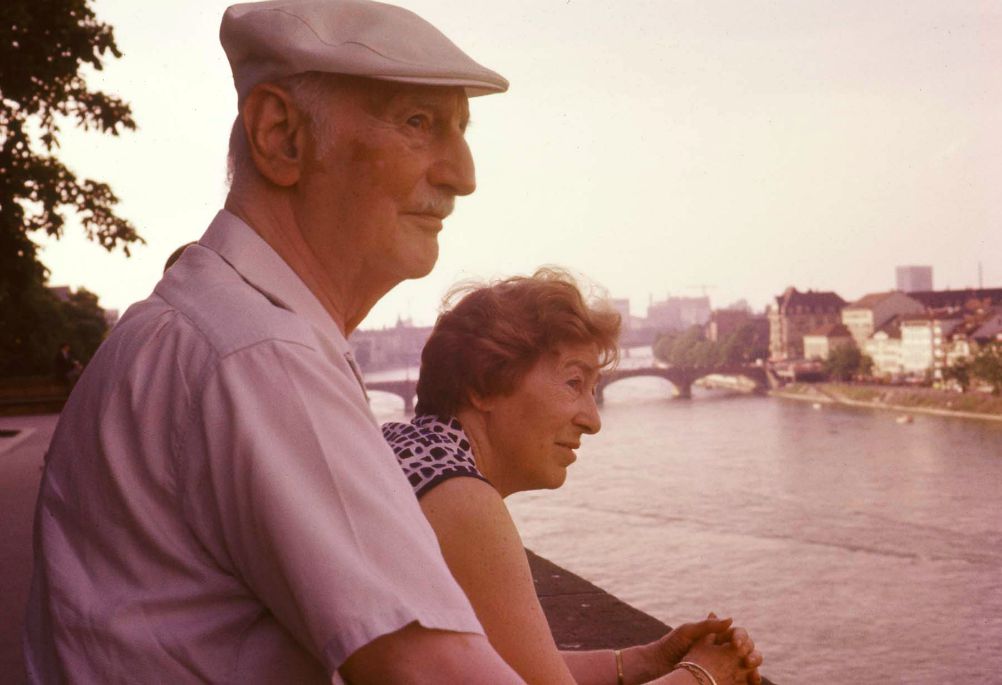