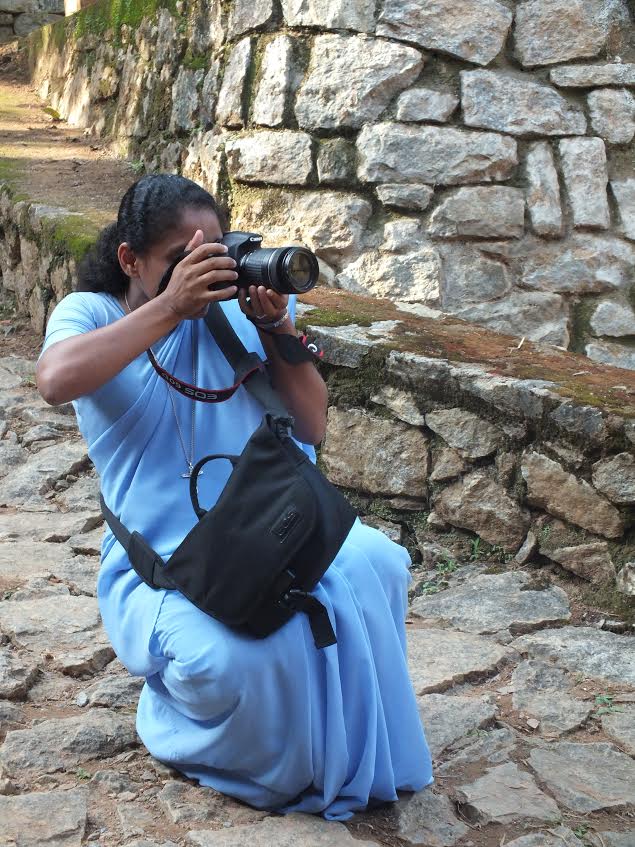 Ujjain, India — Catholic nuns as media persons are a rare sight in India. This was driven home to me recently.

I was the only woman in a six-member crew of a Catholic television channel that went to cover a charismatic prayer meeting in a northern Indian town.

The prayer event was conducted by a Catholic laywoman, who claimed to have received the healing power 26 ago. Some young people who were helping the woman seemed excited to see us — an exclusively Christian devotional channel in the Hindi language — the first of its kind in India.

"One of the young attendees remarked to me, "It is sad that you had to leave religious life to enter media."

I was startled. Soon it dawned on me that he had mistaken me for an "ex-nun" because I was in civil dress. When I corrected him, his jaw nearly dropped. His reaction did not surprise me. He was seeing a Catholic nun as a media person for the first time.

Even I wonder at times how I have landed in this field.

God has a specific plan for everyone's life. My presence in media is also God's plan. That is what I believe.

In 2010, I attended a convention of young religious organized by the Conference of Religious in India, the national association of religious major superiors in the country. The meeting in New Delhi stressed a paradigm shift in religious life to make it relevant in the 21st century. One item in our program was to get acquainted with the digital world. We attended it with amusement as well as trepidation. Some of us were handling computer and Internet for the first time.

Six years down the line, communication using modern methods has become an inevitable part of the religious circle. However, a digital divide exits among the religious in India because of the differences in the charism and lifestyle of each congregation.

I am lucky that my superiors allowed me to go for a master's course in media and communication. It has exposed me to a different world and convinced me that media is a great but hidden opportunity for evangelization. Women religious in India have a promising role there. 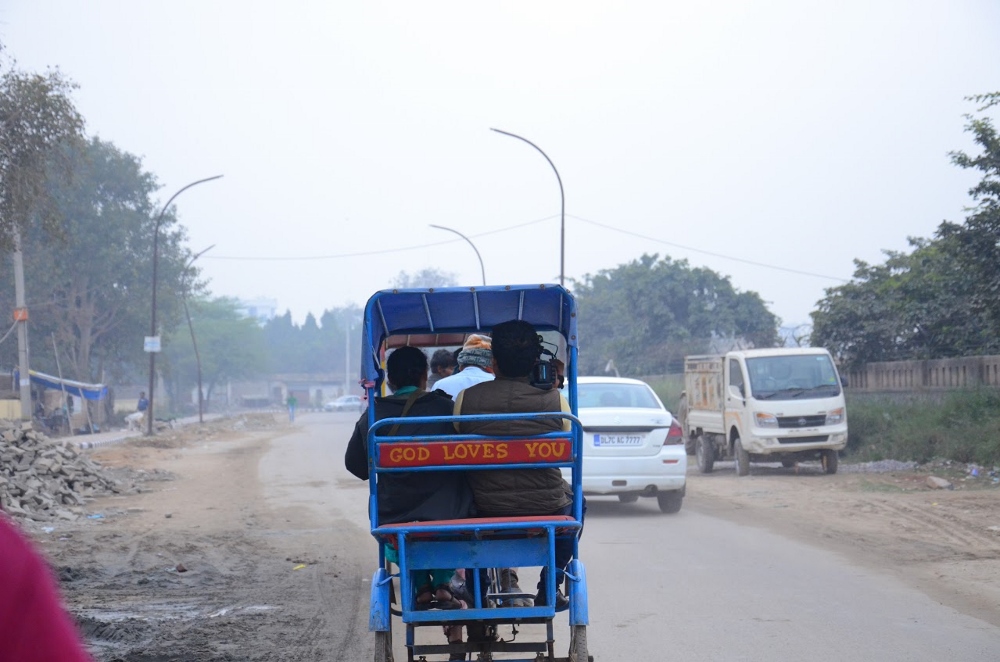 What has the church or the religious got to do with media, a corporate monopoly, my classmates often ask. Mass media may be good, but it has its pitfalls, many say.

I found answers to such doubts in the television channel where I now work as an intern. It is in Ujjain, the cultural capital of the central Indian state of Madhya Pradesh and one of the holy places of Hinduism.

The Ishvani ("good news") channel is managed by the Syro-Malabar Mission diocese of Ujjain. The fact that a channel dedicated exclusively to Christianity is allowed to function in a predominantly Hindu town is unthinkable, especially when religious intolerance permeates India.

Christian missionaries are targeted and religious institutions are attacked in various parts of the country. The term evangelization is being misinterpreted as attempts at conversion. We live in a situation where even helping the poor is seen as a façade for luring people to Christianity.

So, it was indeed a daring act by the Ujjain diocese to preach about Jesus as the savior of the world through a television channel. Ishvani is a cable-operated channel. From telecasting a few programs a day, it has grown into a 24/7 channel.

However, Ishvani has not so far faced any problems. It has grown fast and its programs are far reaching. Its director, Fr. Vineesh Mathew, says the channel's  "sole aim " is to give Jesus to everyone. "Through our programs we make a web of prayer." 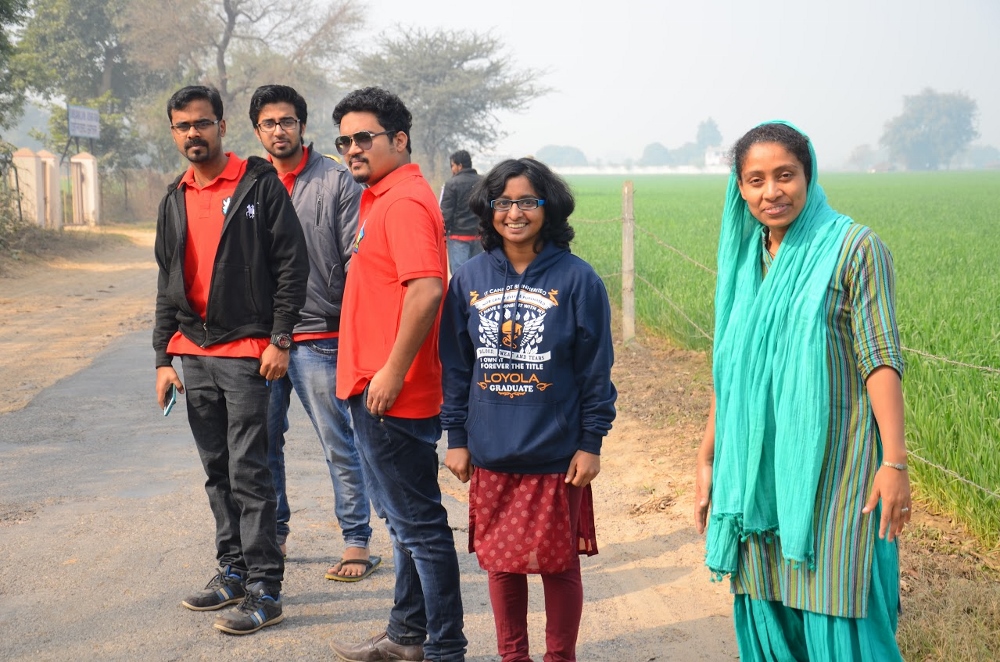 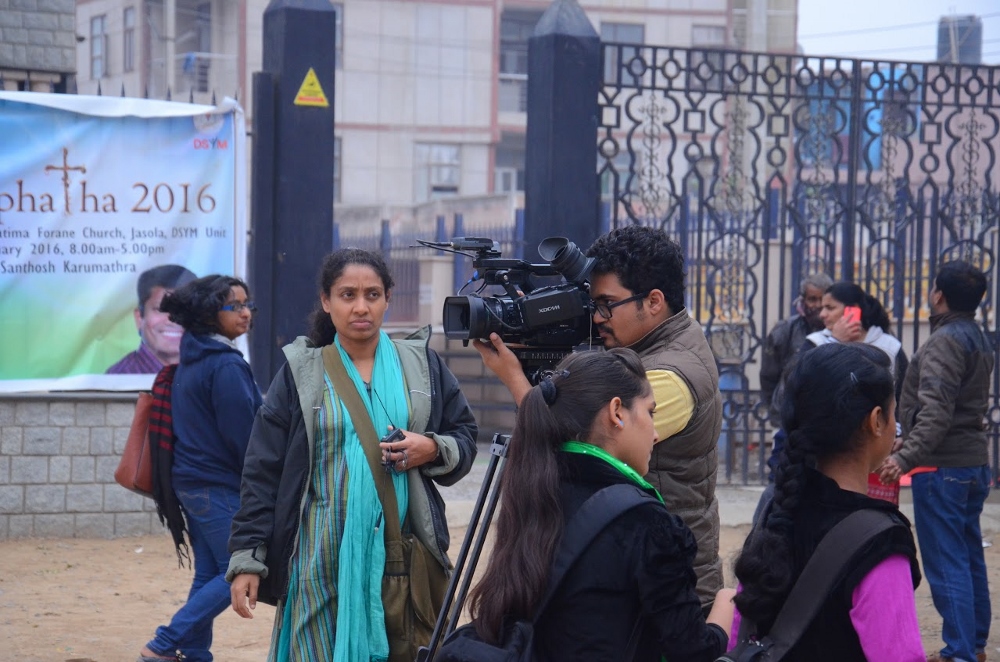 After a couple of months with the channel, I am convinced that India would accept Jesus if presented in the proper way. The experience with the channel has also helped clear some doubts.

My classmates and teachers often ask me what a Catholic can do in the media. From the little they know, they are aware that our life has its limits. I too used to wonder what contribution I could make in this field.

Media takes enormous time. It's all about meeting deadlines and being innovative. A media nun has to forgo schedules and convenience of a religious life. A religious in media has to manage two vocations simultaneously.

Then why do I want to be in media? My dream is to freelance for the mainstream media to help the church get better exposure. News about Christians appears only when they are attacked or when they get into some scandal. The truth gets diluted by the time it reaches the public. The Indian media thinks attacks on Christians and their institutions are the aftermath of conversion attempts. Something has to be done to change this perception.

But what chances do I have in the media? Basically, a nun has a charity-centered identity in India. My classmates tease me, saying that I should sit and pray in the chapel or work in an orphanage. For that, I don't require much academic qualification, they say.

Religious handle too many things at a time. This makes a sister a jack of all trades but a master of none. 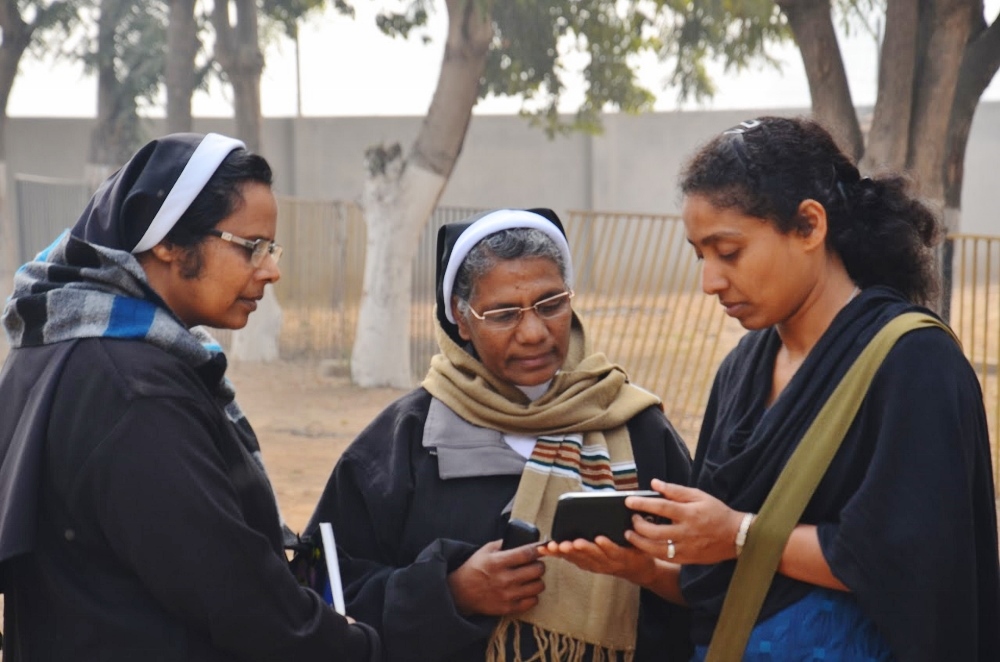 Sr. Tessy Jacob explains to some senior nuns in Bangalore how a Smartphone functions. (Provided photo) 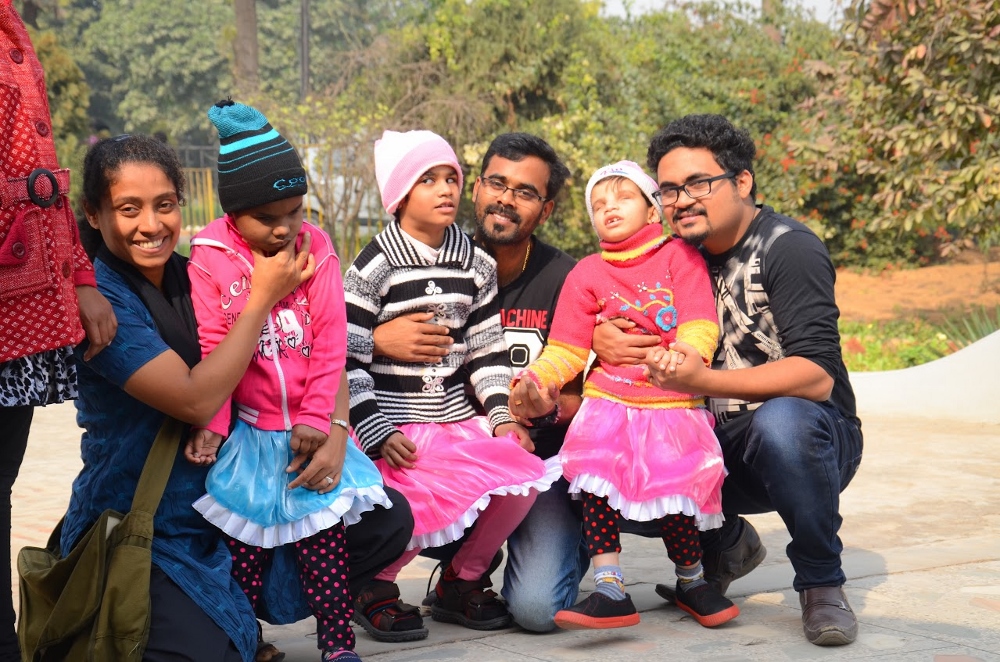 Sr. Tessy Jacob and colleagues with some visually challenged children at Sanjoepuram Village in Faridabad, near Delhi. (Provided photo)

Another hindrance is the dress of a religious. My congregation allows us to dress according to the situation. But not all orders permit that. A year ago, when I wanted to do an internship at a New Delhi newspaper, a friend from the industry asked me whether I would come in the traditional dress of a nun.

Like the young man at the prayer session, many people have difficulty in understanding a young nun's role in a field that they think is meant for someone else. If we are unconventional, they think we have deviated from our real mission. However modern the world may have become, people still view an unconventional nun with suspicion. Someone has even predicted that I would quit the congregation soon.

In short, change may be inevitable, but not for the religious.

Another area a religious has to tackle is the general perception that the media is full of fame and glamour. That may be one reason why religious congregations hesitate to integrate mainstream media activities into their charism. Media remains a frontier mission for us religious.

However, I have tasted what media can do. I also have measured our limitations in the field. Despite all that, I envision a day when national dailies and channels in India will have Catholic religious men and women in their boardrooms.

In a few months I'll complete my media studies. I am part of a province that focuses on grassroots development through education and social work in its villages. I don't know whether media will play a role in my future, but this experience has been fulfilling. I'll have to wait again for God's next plan for me. 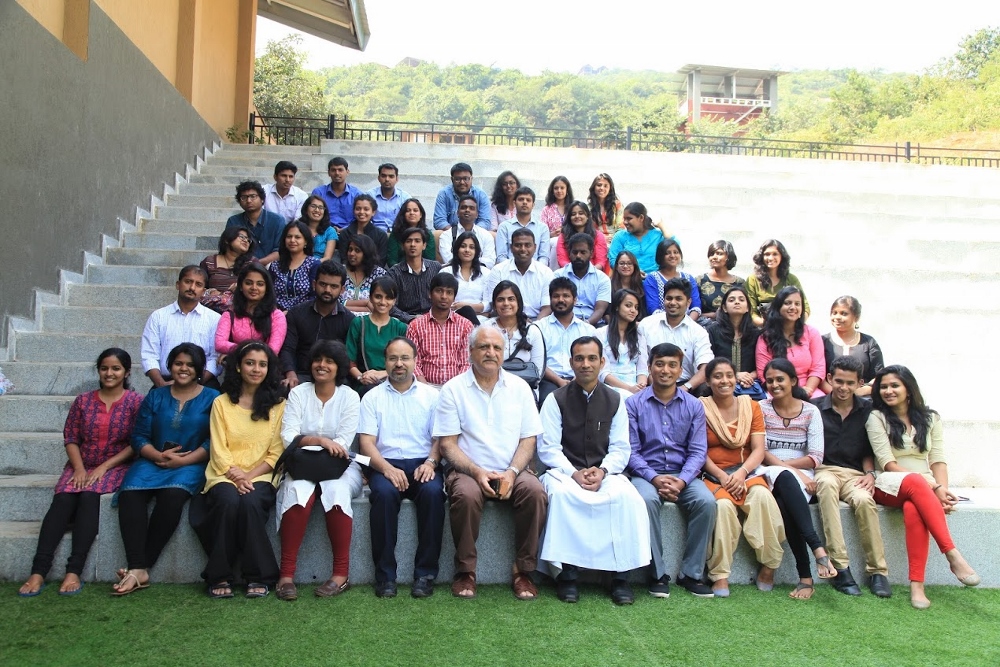 Final-year students in the master's program for communications at Christ University Bangalore. Sr Tessy is fourth from right in the front row. (Provided photo)

[Tessy Jacob is a member of the Holy Spirit congregation and a second-year student of journalism at Christ College, Bangalore, in southern India. This column is part of a collaboration between GSR and Matters India, a news portal started in March 2013 to focus on religious and social issues in India.]

Religious Life | God's plan for me in the media

Take action to welcome the emerging future of religious life

Being Benedictine on the cusp of a new era for monasticism