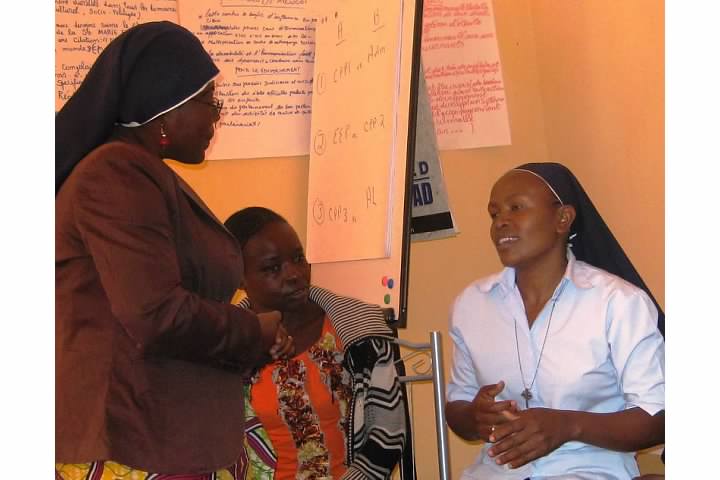 Staff members of Le Bon Pasteur, Kolwezi, act out a scene that imagines how the Good Shepherd Sisters foundress would react to the present day ministry there. (Clare Nolan)

Kolwezi, Democratic Republic of Congo — Year by year we experienced a decline of religious sisters on the staff of Good Shepherd Services, the congregationally sponsored child care agency where I worked. At the same time, professional non-sister staff has grown exponentially as the organization has grown, with new programs developed and departments expanded; managing them has required evermore specialized and complex skills. That was the case in 1990 in New York City, when I assumed a new role as the agency’s first mission effectiveness coordinator. Catholic hospitals had been attending to the trend of a growing lay staff and decline in sister personnel for quite some time, and a number of child welfare institutions began learning from their experience.

The goal of mission effectiveness programs was to “pass on” the heritage of the religious charism through activities as varied as new staff orientation, values articulation workshops, telling and re-telling the founding stories, engagement in strategic planning and staff appreciation luncheons. It required a shift from an attitude that religious sisters “owned” their corporately sponsored works to a mutuality whereby staff was placed in positions, including leadership, based on skill in professional disciplines and responsibility for the vision and mission of the organization. This called for changed perceptions, new understandings, and previously unexpected behaviors. A new awareness of mission, more encompassing than within the members of the congregation, had begun. Although some chaos ensued, over the years we realized that through the integration of staff with our spiritual heritage and mission, we were not so much “passing on” or “preserving” an identity but in fact were shaping it and energizing it anew for the world of today through the input, experience and commitments of all who shared in the desire for compassion and human dignity.

We also came to realize that, more than pragmatic inevitability, the work was a plodding implementation of the vision of the church. Vatican Council II (1962–65) had long ago highlighted that the ministry of the church is and ought to be so much broader than the roles played by clerical or religious orders that had established and administrated, over the past century, a mighty work-force of social service institutions — hospitals, schools, orphanages and care for the aged. In recent decades the church has reminded us that “the laity strive by their civic and apostolic activity to set up a public order based on justice and love.” (Decree Ad Gentes on the Mission Activity of the Church) Later Pope Benedict stressed, “The laity must no longer be viewed as ‘collaborators’ but truly recognized as co-responsible for the church’s being and action.” (Opening of the Pastoral Convention of the Diocese of Rome on the theme "Church Membership and Pastoral Co-responsibility”) In all cases in pluralistic societies “laity” implies a catholic connotation of inclusion of all co-workers of any faith or no faith, all with good will, working for truth.

After five years of mission effectiveness work, I moved to ministry in international justice when my congregation became affiliated with the United Nations. Now, several years later and doing justice training, the circle has come fully around. Justice training involves human rights, child protection and advocacy. And for many of our newer or renewing programs, I am happily discovering that, optimally, such training involves a significant amount of mission effectiveness. This was clear on my last visit in August to Kolwezi, Democratic Republic of the Congo, where the 45 staff members of a three-year-old program (Le Bon Pasteur, Kolwezi) are enthusiastically learning the founding story, acquainting themselves, in the manner of a long-distance friendship, to the congregational founders, and making values applications to their daily practice.

The staff in Kolwezi works with communities who experience abject poverty within the exploitive environment of the mining sector. They easily locate common threads of experience in a history dating back to 1600s in France and their lives in the third millennium. The connection stimulates a thirst for a world transformed by the action of God’s love and mercy. Staff easily places the congregational heritage side by side with U.N. Sustainable Development Goals; side by side with human rights and side by side with advocacy actions to change systems. With that background, they apply the concepts to their daily practice. Clearly, they are paving the way towards an order based on justice and love. 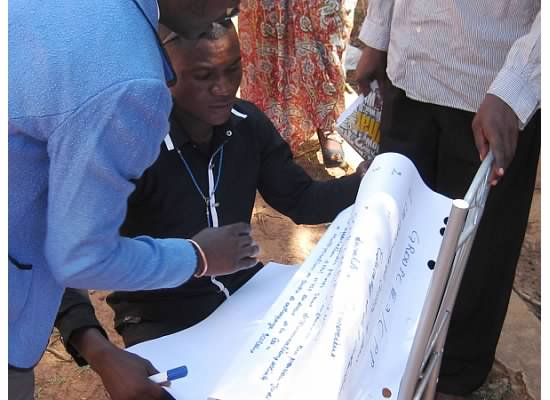 Kolwezi staff work on a report at their August meeting. (Clare Nolan)

In one exercise, each staff group portrayed the religions founder and foundress in various skits, imagining the French religious — a priest from 1600s and a semi-cloistered nun from the 1800s — visiting their programs in the Congo today. One skit in particular bridged the divide of centuries by a simple action: after listening to the difficulties of suffering people, the “foundress” reached into her large pocket book and pulled out a soda to give to each — the compassion of immediate relief and practical comfort on a basic human level — surely an order based on justice and love. I watched the skits and knew that the staff understood both heritage and human rights.

At the end of the week’s training, each staff member received a nylon neck pouch with the agency logo, the same logo as the religious symbol worn by the sisters. The pouches are primarily for identification and safety when they walk through communities for home visits. Pleased to receive the pouches, one staff member asked about the meaning of the logo, which incorporates a cross, a shepherd’s staff and a heart. After the explanation he commented with obvious pride that he had always seen the symbol worn by the sisters and always thought the symbol was only for the sisters. But now, he concluded, he sees that he wears the same symbol and it is for each one, not exclusive to the sisters. He truly recognized himself as co-responsible for the mission; and the group affirmed that, yes, each one participates through professional and civic ministry to create a public order based on justice and love. The mission is alive; the mission is effective.

So too I recognized that I had traveled a circle, an ever widening one over these many years since I first engaged in mission effectiveness. Often we hear talk of diminishment; sometimes we lament low numbers of sisters. But that is only the surface; underneath, we have begun to talk about identity. We have dared to share our deepest spiritual desires with all who share our ministry. We have listened to new insights from those new to the story. We envision ancient values in new contexts and we experience justice and love across all epochs. The pathway I joined in 1990, already well trod by Catholic health care institutions, has stretched around the world and into the small city of Kolwezi where fellow citizens, professional staff, answer a call to a mission that has a special concern to share “the joys and the hopes, the griefs and the anxieties of people of this age.” (Gaudium et Spes) As staff reaches out to “those who are poor or in any way afflicted,” the Good Shepherd mission partners of Kolwezi meet God in both joy and in grief, addressing global issues, confronting the most pressing needs of today’s world and creating a sustainable foundation for the future that reaches effectively back to the past of a rich heritage. 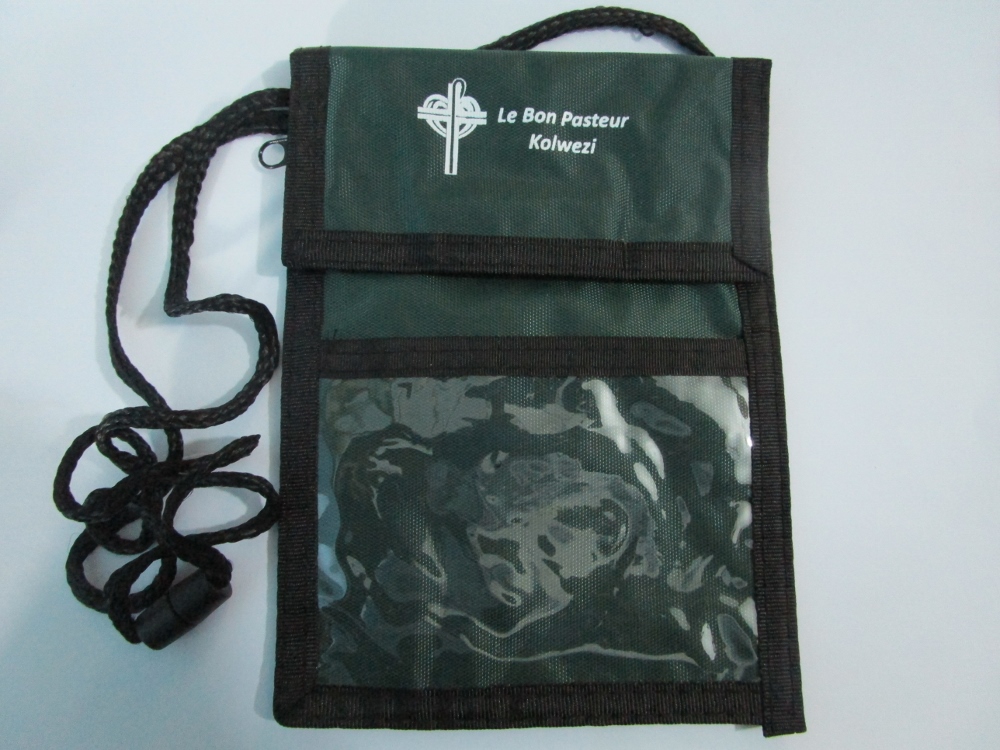 For many in Congo, Chinese gold mining brings upheaval but little benefit