Editor's note: Women religious have long been dedicated to caring for the Earth in myriad ways. As the 24th U.N. Climate Change Conference in Katowice, Poland, gets under way Dec. 2-14, this story looks at the efforts of three congregations, each focused not just on protecting the environment, but ensuring their uses within the environment are sustainable.

When the Sisters of Charity of Nazareth, Kentucky, updated their mission statement in 1995, they decided at the last minute to add six words to the end: "and to care for the Earth."

An afterthought at the time, those six words now have become integral to everything the international order does.

"We really take that seriously," said Sr. Susan Gatz, now former president of the community.* "We began asking ourselves on every level: How are we helping or hurting the Earth?"

As the years passed and asking that question became part of everyday life, the sisters realized they often didn't know the answer. Or when they thought they knew the answer, they feared it might be incomplete or based on assumptions rather than evidence: Electric vehicles seem like a good alternative, but might not be if your electricity comes from burning fossil fuels.

"If you want to help the Earth instead of hurt it, the question becomes, 'So how do we do it?' " Gatz said. "We wanted to look at everything — water, electricity, recycling."

Sisters have been working to protect the environment and teaching others to protect it for decades. In recent years, many communities have worked to permanently protect their own land holdings from development.

But in 2014, the Sisters of Charity of Nazareth realized they wanted to take their efforts further. They also knew they would eventually need to make decisions about the land and buildings they own: the motherhouse campus that was once home to hundreds of sisters, Nazareth College and Academy, the infirmary, the novitiate and a large working farm. What should the land and buildings be in the future, and, more importantly, how could they be used to help care for the Earth?

"We've done some really good things, but we realized we wanted to go to the next level," Gatz said. "We needed someone in the community whose focus was only that."

The sisters began talking to other organizations that had sustainability directors and worked out a job description, which they also sought input on from experts. When they were ready to search for job candidates, the search committee even included someone from Bernheim Arboretum and Research Forest, a 15,000-acre preserve nearby focused on the bond between people and nature.

Carolyn Cromer was named director of the sisters' Office of Ecological Sustainability in 2017. She wasted no time in getting to work: Within a few months, she had set a goal for the congregation's Western Province (the United States and Belize) to become greenhouse-emissions free by 2037 and the Eastern Province (India, Nepal and Botswana) to do the same by 2047.

"That goal is in no way extreme," Cromer said. "But we wanted to set that goal, because if not us, then who?"

There are also opportunities in areas that might be surprising. The congregation's Eastern Province has an extra 10 years to meet its goal of zero greenhouse emissions, but it may meet its goal before the Western Province. Where the sisters minister in India, Nepal and Botswana, there is often little or no infrastructure, so it is not only easier to start out using sustainable energy such as solar power than it is to convert, but sometimes, the sustainable method is the only one available, Cromer said — you can't connect to the grid if there is no grid to connect to.

Recently, Cromer recruited some sisters to examine every piece of waste the campus generated in one day so sisters and staffers could understand the amount of waste created and to see what is being treated as waste that might be able to be reused or recycled instead.

Cromer has also gotten the community to examine its use of fossil fuel-burning vehicles.

"The care committee took a good, long look at the number of miles we drive," Cromer said. "The emissions are significant. So we're purchasing one or two electric vehicles this year."

And because burning fossil fuels generates almost two-thirds of the electricity in the United States, negating much of the environmental benefit of electric cars, the community hopes to eventually have a solar-powered charging station for the new electric vehicles.

Cromer, who has degrees in both ecology and forestry, said a lot of the questions in sustainability don't have easy answers. The motherhouse campus, for example, has been farmed and landscaped and manipulated for more than a century, so returning it to its natural state is not as simple as not mowing the grass.

Having Cromer on staff has turned even simple projects into researched changes. When some vinyl flooring needed to be replaced in one of the buildings, the sisters planned to install carpet until Cromer pointed out that carpet can emit chemicals into the air for years. Instead, the floor was painted with low-emission paint.

"Nazareth isn't its own little thing," she said. "We sit in a watershed and in a region, and all of it is interconnected. So we can't be planning in isolation."

Planning has also been key for the Adrian Dominican Sisters, who have been practicing permaculture since 2012. Permaculture is a strategy to work in harmony with the land rather than trying to fight the forces of nature.

Sr. Corinne Sanders, the Adrian Dominicans' director of sustainability, said permaculture — a combination of the words "permanent" and "agriculture" — is at its heart a design principle, but it has become part of the community's culture, as well.

"Many look at permaculture as agricultural or that it's only for land-based applications, but it applies to all aspects," Sanders said. "It's everything from how buildings come into being to the health and spiritual well-being of the people living and working there."

The most obvious aspect of the community's efforts is the Permaculture Gardens, which were once seven acres of mowed turf grass but now feature a food forest; four different types of composting; a community garden; a garden in raised beds on permeable asphalt so it is accessible to those using wheelchairs, walkers or scooters; a vegetable cooperative; rainwater-harvesting structures to irrigate the gardens; and earthworks and swales to slow, spread and filter rainwater runoff.

"Permaculture has been around for a long time," Sanders said. "It's really a design principle for working with and in harmony with nature, so it's based on three ethics: Earth care, people care and fair share."

Now, any type of building renovation, upgrade or construction project for the Adrian Dominicans is looked at through the permaculture lens, she said, with the goal of producing no waste and using as little energy as efficiently as possible.

"We've made a commitment to look at our own lifestyles and our impact on climate change and degradation of the Earth, and we look at permaculture principles as guiding ways to do that," Sanders said.

Next door to the motherhouse campus is Siena Heights University, a sponsored ministry, and in addition to the students and faculty who volunteer at the permaculture site, there are classes that meet there once a week for on-site learning.

Barry University in Miami Shores, Florida, is also a sponsored ministry of the Adrian Dominicans, and students from Barry join Siena Heights students for two weeks of intensive permaculture education at the site. The sisters hope to soon have a permaculture site at Barry University and do another two-week program there, focusing on the endangered ecosystems and agriculture of that area.

"For years, we've been so involved in our relationship with Earth, but now the need is so imminent right before our eyes," Sanders said. "Permaculture goes beyond just agriculture."

The Villa Farm at the Sisters of the Humility of Mary campus in New Bedford, Pennsylvania, has been sustaining the sisters and their neighbors since 1864. Land manager John Moreira's job is to make sure it can do so for the next 154 years.

"There's an old adage that goes back to the Dust Bowl," Moreira said. "If you're not trying to grow your soil, you'll lose your soil."

Moreira said continually planting row crops without proper cover and without allowing the land to go fallow occasionally doesn't just deplete the nutrients from the soil, it depletes the soil itself.

"You do corn after corn after corn, and there's a demonstrable difference in the soil that's there," he said. "But you can make organic matter just by proper crop rotations and fallow years."

But that dedication requires a long-term view, rather than a constant quest for short-term profits. Last week, Moreira said, the farm across the street harvested its crop of soybeans, but the Villa Farm waited, because the soil was too wet and would be compacted by the tractor, causing permanent damage. The result was a less-than-stellar harvest, but soil that remains healthy.

That long-term vision has led the sisters to go through the multi-year process of having the farm certified as organic. One hundred fifty of the farm's 280 acres should be certified organic next year, and the rest should be certified the year after. Once the crops are certified, Moreira said, they will double and sometimes triple in value.

"There's a demand for it in the United States," he said. "We're importing organic food from Europe because farmers here can't meet the demand."

Sr. Barbara Wincik, a member of the community's leadership team, said the sisters themselves were imports from France.

"Our mission is to bring more abundant life to God's people, especially the poor," Wincik said. "The land is very important to that."

While the row crops are sold, much of the produce is donated to food banks.

Wincik said the farm may be sustainable agriculturally and ecologically, but is not currently self-sustaining economically. That may change once it has organic certification.

The 759-acre campus also has 400 acres of forest that are carefully managed.

Wincik said the harmony with the land extends beyond sustainability efforts — the sisters have been living, praying, working and ministering on the land for a century and a half, and that spirituality can be felt. She said visitors to the campus retreat and education center remark that when they drive onto the property, they immediately feel a sense of peace.

"I think that's what people feel when they come to the Villa," she said. "It's just peaceful."

* Sr. Susan Gatz was president at the time of the interview. 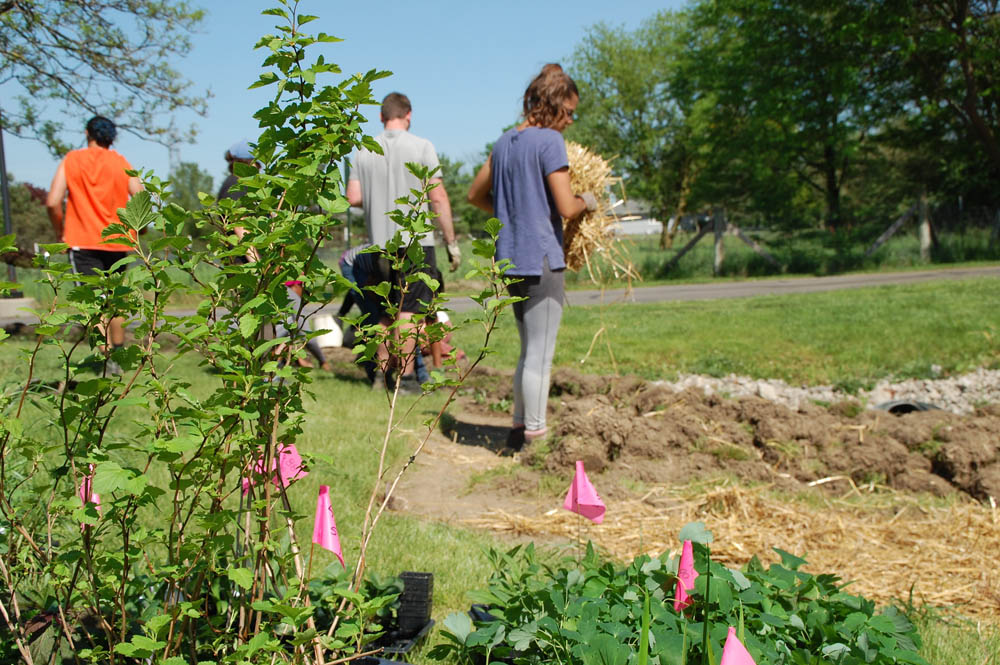 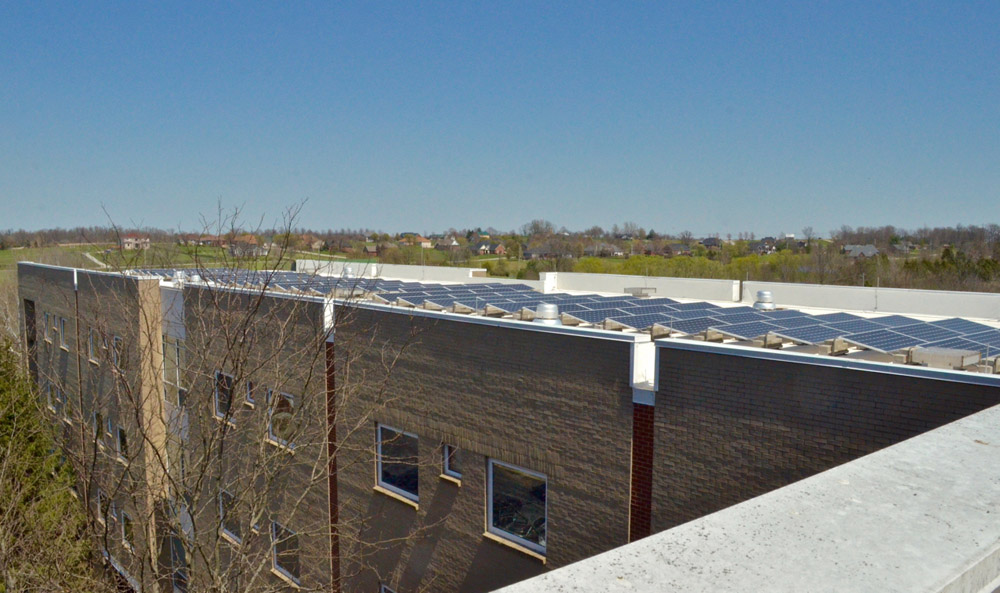 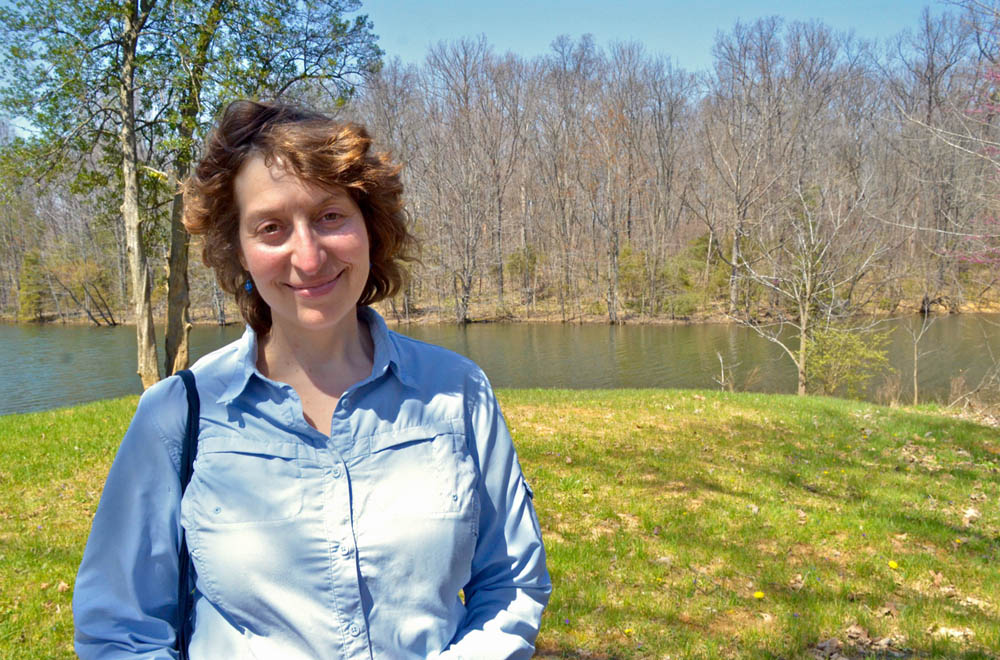 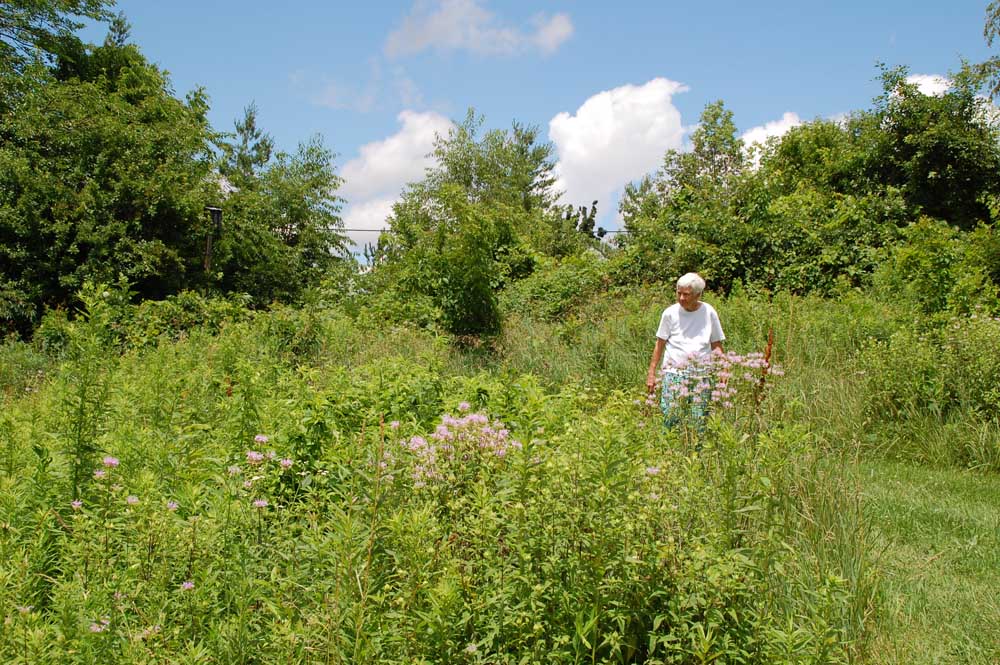 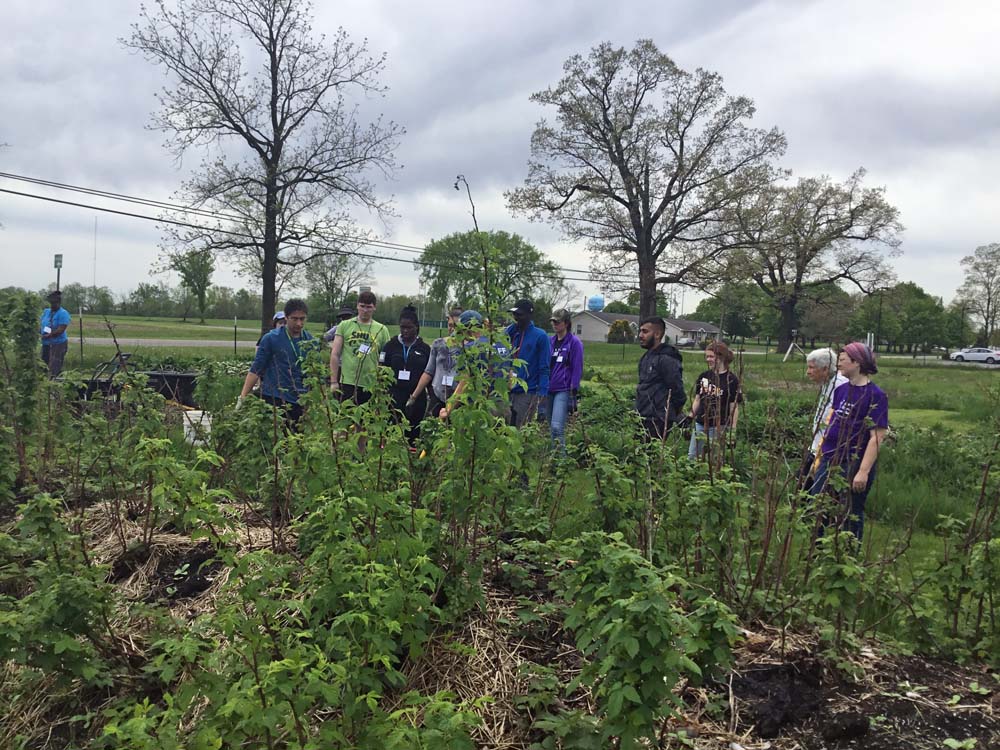 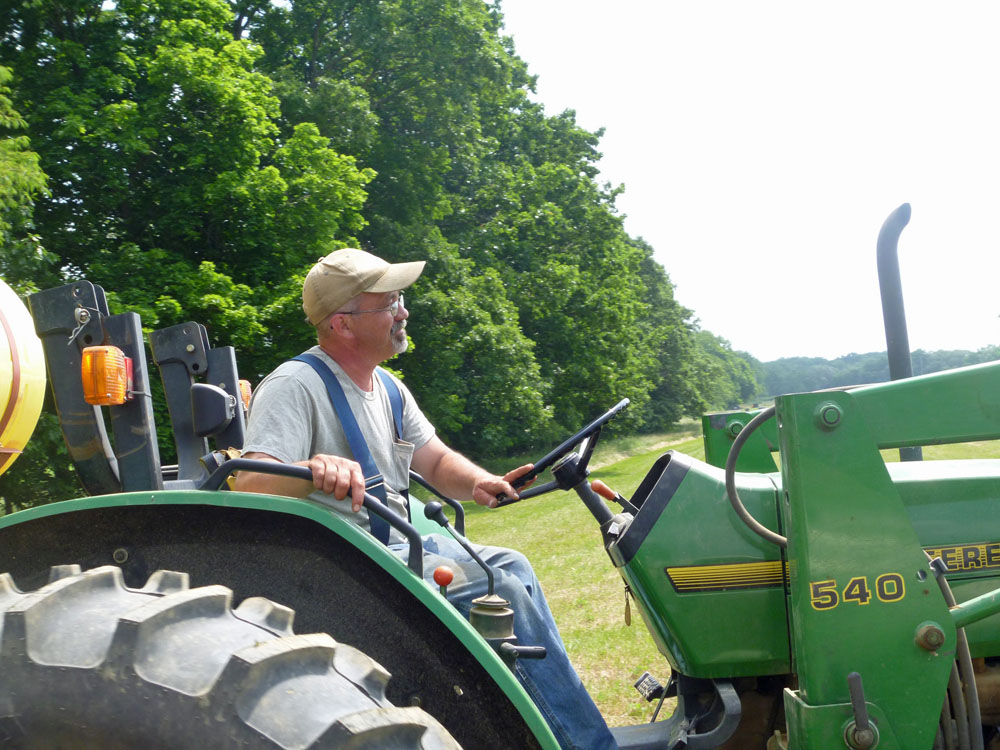 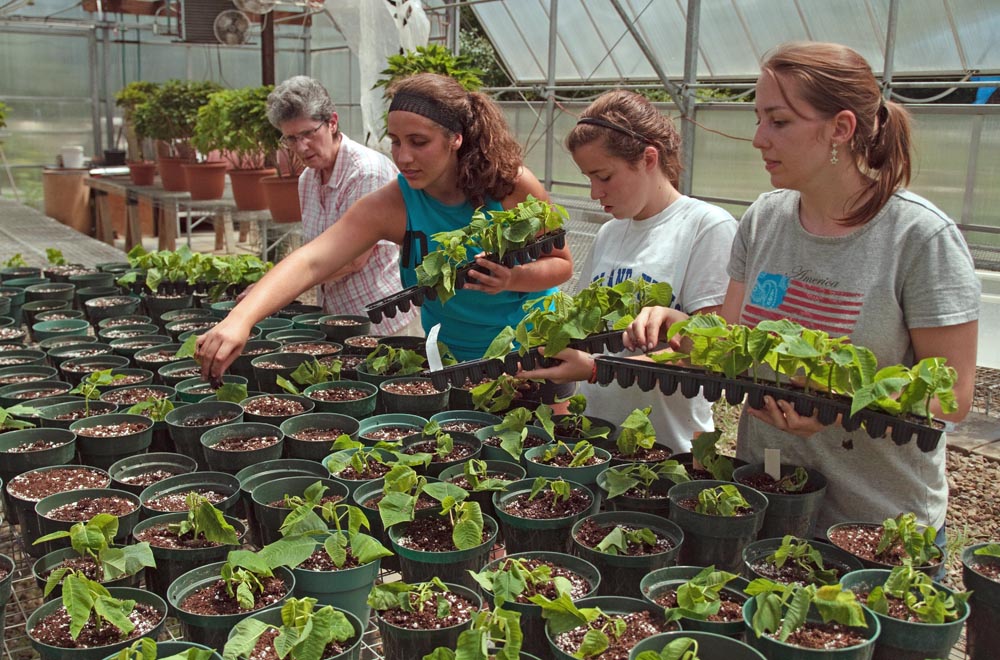