This week, starting Sept. 17, NETWORK’s Nuns on the Bus will board a new bus to launch a campaign against the power of big money to severely damage our nation’s democratic principles. This new journey is all about supporting the even bigger power of the community of U.S. voters when we all choose to engage.

Living my faith has taught me about the meaning and strength of community. We are all one body. All are important. Nobody can be left out.

In the past two years, my “Nuns on the Bus” journeys have deepened my understanding of what this means in profound ways. As I have traveled from state to state across our nation, I have realized that all of us are connected in ways I never expected.

For example, I was surprised by a conductor on a New York-to-Washington train who recognized me as one of the Nuns on the Bus.  When she gave me my ticket stub I discovered that she had written her name and a note on the back asking me to pray for her special intentions.

Another day, as our bus arrived in Janesville, Wisc., we Nuns on the Bus were met by a huge crowd waving signs. As in many other places, one of the signs said, “I stand with the Nuns!” Yes, we all stand together. We are all community.

I have repeatedly said that it is an unpatriotic lie that our nation is rooted in individualism. Our Constitution makes it clear that We the People are called to form a more perfect union. We are all called to act for justice for the 100 percent, our entire nation.

Millions of people have heard of NETWORK’s Nuns on the Bus. Since 2012, we have taken part in highly publicized journeys across our nation. We have driven from state to state to connect directly with the people and lift up the work of Catholic sisters.

Each of our previous trips was also focused on convincing constituents and elected officials that Congress must vote for justice. In 2012, we wanted Congress to reject U.S. Rep. Paul Ryan’s budget, which would have harmed vital programs that help people at the economic margins. During subsequent journeys, we called on elected officials to expand Medicaid and reform our shattered immigration system.

So what is different this year? What convinces me that I should once again spend several weeks riding from state to state in another brightly colored bus?

I have come to realize that our earlier journeys were all about convincing those in power – in Washington and state capitals – that they should exercise their power in everyone’s behalf. Vote against the Paul Ryan budget, we said. Vote for Medicaid expansion! Vote for immigration reform!

But this time, we are focused directly on the power of the people. This new trip is all about how we, the community of voters, have the power to create justice ourselves. It’s all about democracy.

Our new bus is emblazoned with the words “We the People, We the Voters.” It also has places on the exterior where people can sign their names, pledging to be active members of the voting community.

Why did we select this theme this year? Because there is an urgent need for people to reclaim our democracy. Simply put, it is being threatened by big money.

It has been clear for years that wealth and income disparities in our nation have grown exponentially. People who are poor have grown proportionally poorer, and those with the greatest wealth have grown far, far richer.

To make matters even worse, we now have billions of dollars pouring into election campaigns from the wealthiest individuals and corporations. Huge amounts of money are “donated” during this election year in order to elect candidates friendly to the interests of the donors, who are allowed to remain anonymous. Common Cause, a watchdog group, has called our current system of financing political campaigns “a system of legalized bribery.”

Because our election campaigns are now awash with big money, voters are relentlessly pummeled by political advertising. Almost everyone has become disgusted with attack ads, and large numbers of people are disillusioned with the dysfunction in Washington. A discouraged electorate so turned off that voters fail to show up at the polls means that wealthy donors get more bang for the buck. Their voices grow constantly louder and more powerful as they demand that Congress pay attention only to them. This hurts all of us. This hurts the 100 percent.

So what is the answer? It’s simple, really. We the People, We the Voters must reclaim our power by showing up at the polls.

The only thing more powerful than big money is the power of constituents to vote candidates in or out of office. When we show up in record numbers, they have to listen. They have no choice because candidates fear losing elections almost more than anything else.

During this trip, we Nuns on the Bus will not promote specific candidates or legislative actions to counter unregulated campaign funding. Instead, our messages will all be about energizing the electorate. Getting large numbers of voters to the polls will mean that all voices will be heard, not just those of the wealthy and powerful. This is the power of democracy!

Our messages will be: Vote! And don’t vote alone! Encourage and help others to vote! Be a part of our democracy. It is what we need to “form a more perfect union.”

In addition to individual voter commitments, we will urge workplaces, parishes, congregations and neighborhoods to pledge to get all of their members to vote. We want all the groups and organizations to become “100% Voters” in the November election, and in all elections beyond.

Every vote counts, but we need the power of a large voting community to make change happen. When we stand together, We the People are strong enough to create governance for everyone, not just the rich and mighty. Use your vote to stand up against big money. We the People must work together – and vote – for the 100 percent.

[Social Service Sr. Simone Campbell is executive director of NETWORK, a national Catholic social justice lobby, and author of A Nun on the Bus: How All of Us Can Create Hope, Change, and Community. Follow NETWORK’s Nuns on the Bus on nunsonthebus.org. For information about voter registration and Election Day reminders, go to nunsonthebus.org/vote.] 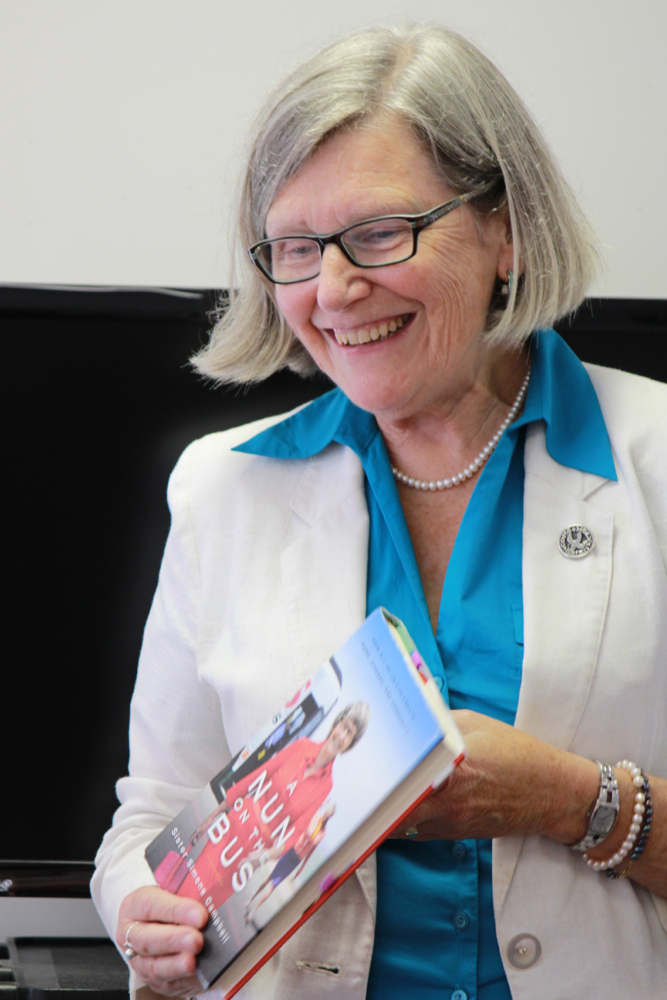