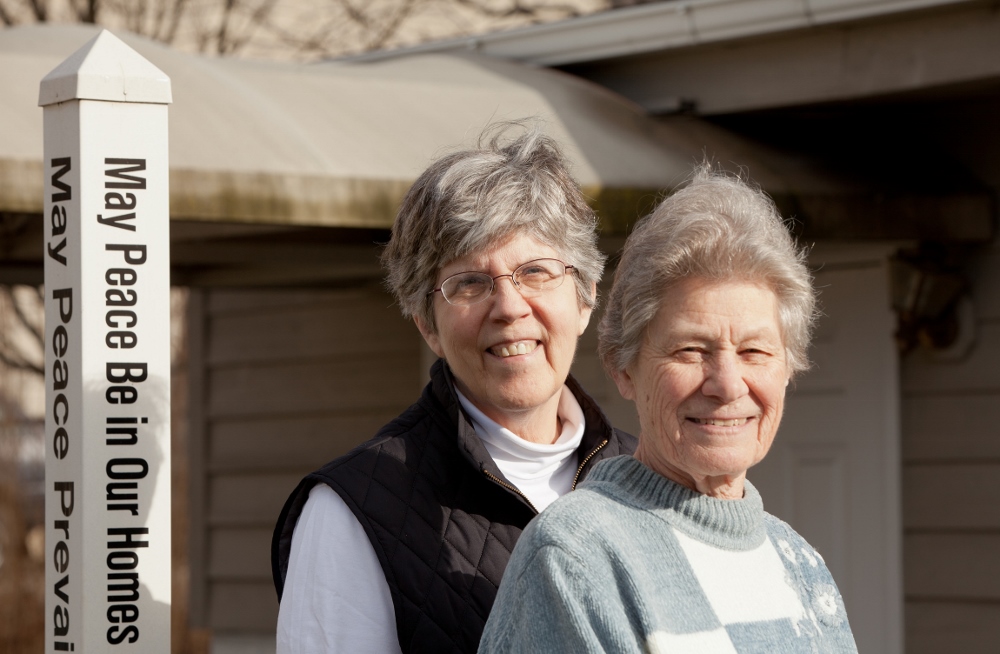 Dominican Srs. Carol Gilbert and Ardeth Platte outside of Jonah House in west Baltimore Jan. 12, 2012. When not in jail, their home is the faith-based community of peace activists. The women have been arrested dozens of times on charges related to their demonstrations against war and nuclear weapons. (CNS photo/Nancy Phelan Wiechec)

Baltimore, Maryland — They call themselves peacemakers, following in the footsteps of the nonviolent Jesus.

Dominican Srs. Carol Gilbert and Ardeth Platte, members of the Jonah House community in Baltimore since 1995, have spent decades crisscrossing the United States opposing war and acting to bring to life the biblical call to "beat swords into plowshares" in symbolically disarming nuclear weapons and other tools of war. Their actions – as feeble as they might seem – have led to countless years in prison.

They say there is no better calling.

"I think being a good Catholic calls us to do these things," Gilbert told Catholic News Service at Jonah House on the grounds of the Archdiocese of Baltimore's St. Peter's Cemetery, where the nuns and other community members are caretakers.

"What is so important for people to understand [is] that in being faithful, God speaks," Platte continued. "We never know when we do an action where it's going to go, who it's going to touch, what it's going to speak to others."

The Michigan natives describe themselves as resisters of war and violence. They said their actions are meant to call attention to what they believe are the immoral war policies of the government. They contrasted their actions to disarm with civil disobedience, a tactic often used by protesters to change a law.

Under such thinking, they explained, prison poses no fear. For them, their actions go hand in hand with their Catholic faith.

Critics might consider the sisters misguided or even foolish. They have been dismissed as being fringe participants in a world that is far more dangerous than they realize.

But they have the support of their order, the Dominican Sisters-Grand Rapids, whose charism proclaims they are seekers of truth and empowers others to join the same pursuit.

Gilbert and Platte started their journey in the midst of the Vietnam War, early in their careers as educators in Michigan. Platte, 75, saw how crime and drug violence in Saginaw was claiming the lives of young people. Those who managed to avoid trouble faced unemployment and many ended up in the armed forces, fighting in the war and often returning dead or maimed. Through her understanding of Scripture, Sister Platte began to connect the violence of war to the violence of poverty and social injustice.

Gilbert, 64, moved to Saginaw from Grand Rapids in the mid-1970s. The two met and soon realized Scripture was challenging them to respond to the violence they witnessed. The turning point came when they attended an international conference on nuclear disarmament in 1978 in New York, where they heard from the likes of anti-nuclear activist Dr. Helen Caldicott and New York Rep. Bella Abzug, who urged attendees to address the challenges nuclear weapons posed.

It was also the time of the rise of peace and justice commissions in dioceses and parishes. Inspired by the growing movement and what they had heard, the sisters embarked on a 40-day trek across the country visiting and praying at nuclear weapons related sites: the communications towers constructed to wage war, missile silos in out-of-the way places and factories that assembled bomb components.

"It was more than just travel. It was a spiritual journey," Platte recalled.

"The journey escalated us into the vow to spend the rest of our lives ridding the world of nuclear weapons and stopping war forever," she said.

For more than three decades, the sisters have witnessed in the face of military might. From calling attention to the presence of nuclear weapons at two now-closed Michigan air force bases in the 1980s to leading Faith and Resistance retreats to share the message of peace found in Scripture, Gilbert and Platte have carried a consistent message to the world. They recognize though that their desire, if it is realized, is far down the road.

Both women recognize that not everyone is called to join the so-called Plowshares actions. What they envision is a circle in which people take the steps they are most comfortable taking: writing a letter to the editor, calling a political representative, leading a prayer vigil or leafleting at a symbol of military power. From those steps comes deeper action, they believe.

Gilbert said the resistance work is sustained by living in community with like believers and supporters. Jonah House residents include Elizabeth McAllister, whose husband was the late Phillip Berrigan, and Susan Crane, who is serving a prison term for a Plowshares action on All Saints' Day in 2009 at Naval Base Kitsap 20 miles west of Seattle, where more than 2,300 nuclear weapons are believed to be stored.

The sisters' most recent time in prison was perhaps their most challenging. They were released from a prison in Georgia in September, four months after being convicted of entering the property of the Y-12 National Security Complex in Oak Ridge, Tenn., to pray for peace. They described the prison as almost windowless and constantly cold. Many of the women inmates were poor and some felt helpless.

It was there that their longtime friend and companion resister Dominican Sr. Jacqueline Hudson languished for days in the prison infirmary with little treatment for an illness that ultimately claimed her life. They said the experience has led them to confronting the for-profit prison model that sees inmates as commodities to manage.

"It is not ourselves that do this good work," Platte said. "It's way above and beyond. When people are faithful, that is what the true witness is. It is not necessarily going to be a powerful, successful story of eliminating all of the nuclear weapons in the world at this time.

My grace of being a companion