'It pierced my heart like a knife,' nun says after visit to Iraqis 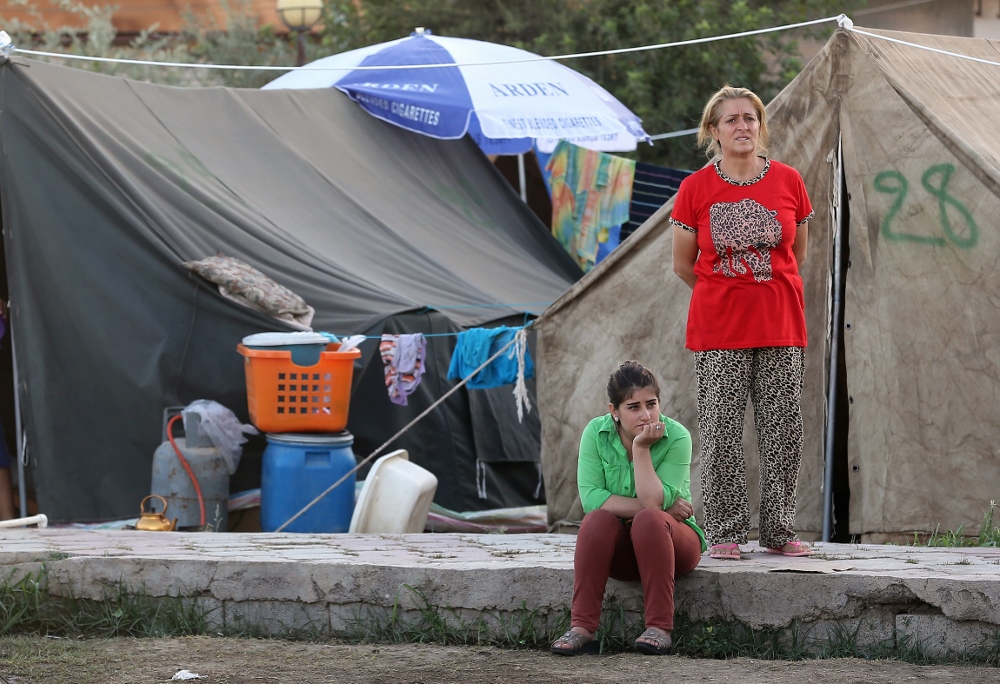 Two Christian women from Qaraqosh, Iraq, who were forced to flee advancing Islamic State militants in Mosul, wait in front of tents outside St. Joseph Shrine near Irbil, Iraq, Sept. 10. Sr. Marie Claude Naddaf, provincial leader of Lebanon and Syria for the Sisters of the Good Shepherd, is still shaken by what she witnessed visiting Irbil. (CNS photo/Mohamed Messara, EPA)

Beirut, Lebanon — Sr. Marie Claude Naddaf, provincial leader of the Sisters of the Good Shepherd for Lebanon and Syria, is still shaken by what she witnessed visiting Irbil, Iraq.

Representing the Union of the Superior Generals of women religious in Lebanon, Naddaf accompanied Catholic Near East Welfare Association on its Sept. 2-5 mission to the capital of the Kurdish region in Iraq.

More than 100,000 Christians and other minorities sought refuge in the region following attacks by Islamic State militants. Many were given less than half an hour to flee their houses.

"I saw with my eyes, listened with my ears, met them [refugees] and received them in my heart," Naddaf told Catholic News Service. "I was not at all expecting to see that much misery, poverty and sadness in the eyes of the refugees."

"For me, it's very difficult to find the words to describe this tragedy, people who were uprooted from their civilization, their culture, their land. They were pulled out like weeds – expulsed, exiled and taken away. Will the world even try to understand and feel what these people are feeling?"

Naddaf lived through Lebanon's 1975-90 war, the current war in Syria, and has served Iraqi refugees who fled to Syria after the 2003 U.S.-led invasion of Iraq.

"But never before have I witnessed anything like this, people living on the streets, when before they were living comfortably with dignity in their homes," she said. "It pierced my heart like a knife."

Most of the displaced adults are educated professionals – doctors, engineers, architects, government workers, teachers and university professors – who were providing services to the Iraqi people.

Now their future is uncertain.

Naddaf likened their plight to that of the first Christians living in the catacombs, exposed to the elements and all kinds of dangers.

A recipient of the "International Woman of Courage" award from the U.S State Department in 2010 for her work with abused, neglected and trafficked women, Naddaf has continued to be one of the Middle East region's most effective champions for at-risk women.

"There are all these political strategies and policies concerning women's rights and violence against women, yet women are left exposed on roads and sidewalks of Irbil, exposed to all kinds of violence and dangers, and nobody is doing anything to raise a voice for them," Naddaf said. "The world is able to see, but it seems it doesn't want to look at them."

During her visit, she heard about a pregnant woman who was living in a tent with about 20 other people when she went into labor. The woman delivered her baby without any medical assistance.

"There was not even anything to cover the newborn baby with, except a shirt off of somebody's back."

The next day the baby was very sick, so the mother walked with her baby to the dispensary tent. Because there was a team of about 15 doctors, all exiles from Qaraqosh volunteering their time, the baby's life was saved. But the baby's face was severely burned from exposure to the sun during the walk.

"I want to send a plea to the world. This is enough. It cannot continue," Naddaf said.

She questioned a policy of ordering airstrikes against the Islamic State.

"The U.S. minister of defense is saying that each airstrike would cost $8 million," she said.

Instead, she said, the international community should work toward liberating the villages that were taken over by Islamic State militants and, through the United Nations, create a protected zone.

The objective of such raids, Naddaf said, is "just to protect their own interests, especially the areas rich in oil."

Yet the church, she said, is a shining witness amid the misery.

Among the displaced are two bishops, priests and more than 100 sisters who are living among the people, helping them and sharing in their sorrows, she said.

Related - Sister to sister: Christians in Syria, Iraq and Lebanon by Clare Nolan.

Ministry | 'It pierced my heart like a knife,' nun says after visit to Iraqis

Q & A with Rachael Consoli, delivering babies in a war zone

Q & A with Srs. Barbara Kennedy and Sarah Deeby, providing counseling for what patients can afford