On a one-acre public park running along the sandy beach of My Khe that is dotted with casuarina trees, hotels, restaurants and bars, stand the statues of Jesus Christ, Mother Mary with babe in arms and St. Joseph.

Our Lady Star of the Sea, a religious park in Da Nang City, central Vietnam, draws hundreds of visitors and pilgrims daily to its bonsais, trees, flowers, grass and winding concrete paths. On the grounds owned by the sisters of St. Paul de Chartres before the government took the lands, people pray and leave incense and bouquets under the Christian statues.

Only a few visitors know the history of the statues, the park next door to the convent of St. Paul de Chartres, and the elderly nuns who have made enormous contributions to the city’s only religious park.

Sr. Anna Nguyen Thi Hoa, who was assigned to this convent in 2004, said after 1975, when the country was reunified under communist rule, the government confiscated 5,000 square meters out of the nuns’ properties and reallocated them to local officials. Then the officials sold the land to others, who built restaurants, hotels, bars and other leisure facilities.

Hoa, now 72, said in 2005 city authorities built a road along the beach and took away another 5,000 square meters of land to build the park without paying any compensation to the nuns.

In Vietnam, private ownership of land is not permitted, and people are given ownership only of the right to use land by law. The government reclaims land for reasons of national security and economic development they deem to be in the public’s interest.

The nuns refused to move the Marian statue they built in 1974 and erected an iron sheet roof over it. “We elderly nuns sat reciting prayers in front of the statue day in and day out while workers and bulldozers were working around us,” she recalled.

Hoa said the government continued to try to make the nuns transfer the statue to another place until 2006, when the deadly Typhoon Xangsane hit the city and other central provinces. The storm is credited with causing 65 deaths and 500 injuries, and destroying 90,000 houses in that region of Vietnam.

“Local people were surprised at how the temporary roof and statue remained standing without damage, despite tens of surrounding big casuarina trees falling down during the typhoon,” she noted.

The government recognized the Marian statue standing in the park and named the park Sao Bien (Star of the Sea). The St. Joseph statue was also added to the park.

In 2008 the nuns built a pedestal, on which the Marian statue now stands, and a firm glass roof over it. They and the bishop of Da Nang diocese lead monthly prayers in front of the statue.

Hoa, who looks after the statues, said the nuns also protected the park from a local official who occupied part of the park to sell beer and food to tourists, and who planned to build a restaurant in 2012.

“Elderly nuns, including those who were in wheelchairs, came to the site and told the official that the land was owned by the convent and asked him to stop construction on the land,” she said. “Church properties should be used for the common good, not for private interests of some people."

The nuns built a 26-foot-high wooden cross there at 2 a.m. so as not to provoke the park guards’ intervention.

Afterward park officials asked the nuns to move the cross. “I told them that we erected the cross aiming to protect the park and the environment,” Hoa said.

She explained to the officials that many restaurant customers were urinating in the park and creating an offensive odor, and that restaurant workers were dumping garbage and wastewater there. “I told them that the park with holy statues and our convent are religious sites needing to be respected. And then they left.”

“We contribute to beautifying the park where Catholics and tourists visit, take photos and pray in front of the statues,” she said.

Hoa said, although the park was built by the government, the land is owned by the church and the park is a religious site for these reasons: It borders the sea with the rising sun in the east; the convent’s chapel holding the Eucharist is in the west; the Stella Maris statue is to the south; and the Christ statue is to the north.

She recalled that the nuns completed the construction of the religious park in June 2014, when, at midnight, 30 nuns and laypeople put up the stone statue of Jesus near the cross. Five officials came to accuse the nuns of erecting the statue illegally in the park and ordered them to move it, but the nuns refused to do so.

“We believe that God protects us safely because they [authorities] have no longer threatened us or asked us to move the statue,” Hoa said.

Hoa, who gives ministry to pilgrims, said each month the convent provides accommodation for 10 to 30 groups of 10 to 100 pilgrims each, who go into retreats at the convent and visit statues in the park as part of their sightseeing tours of the city.

On April 29, Nguyen Thi Kim Oanh put roses under the Marian statue and prayed. “I come here twice a year to thank Mother Mary for curing my son of liver cancer in 2011,” she said.

Her son had terminal liver cancer, and doctors refused to treat him after he had been in the hospital for months. “I believed in Mother Mary and promised to visit her yearly after she cured him. She received my prayer, and my son made a recovery from the disease,” she recalled.

Another Marian devotee, Paul Nguyen The Lan, a local Catholic, has ridden his bicycle to the park every day for 9 years to recite the rosary and clean the statues.

He suffered partial paralysis of his legs after a stroke in 2005. His daughter carried him to the park to pray with Mother Mary and practice walking.

“I am deeply grateful to the nuns who are brave and determined to struggle to keep the statues in the park for all people to come to pray and relax after work,” Lan, 75, said.

Followers of other faiths also pray and put flowers and incense under Catholic statues, he said, and many put stone boards of thanksgiving on the wall of the convent.

“Our Lady Star of the Sea, has become very popular with local people, including non-Catholics,” he noted. 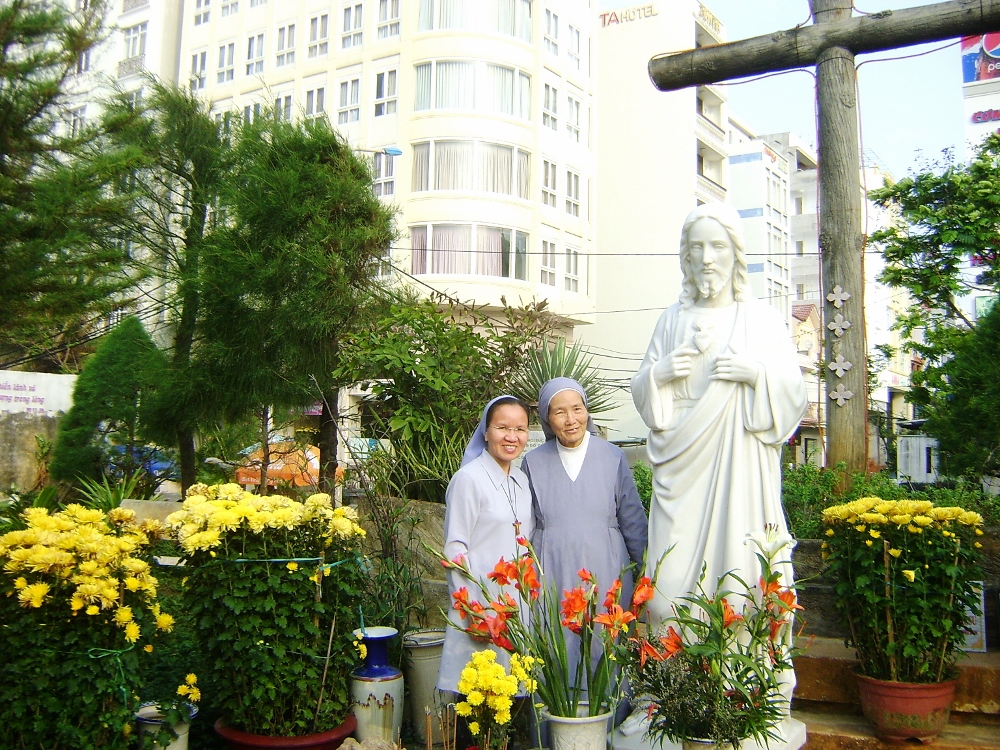 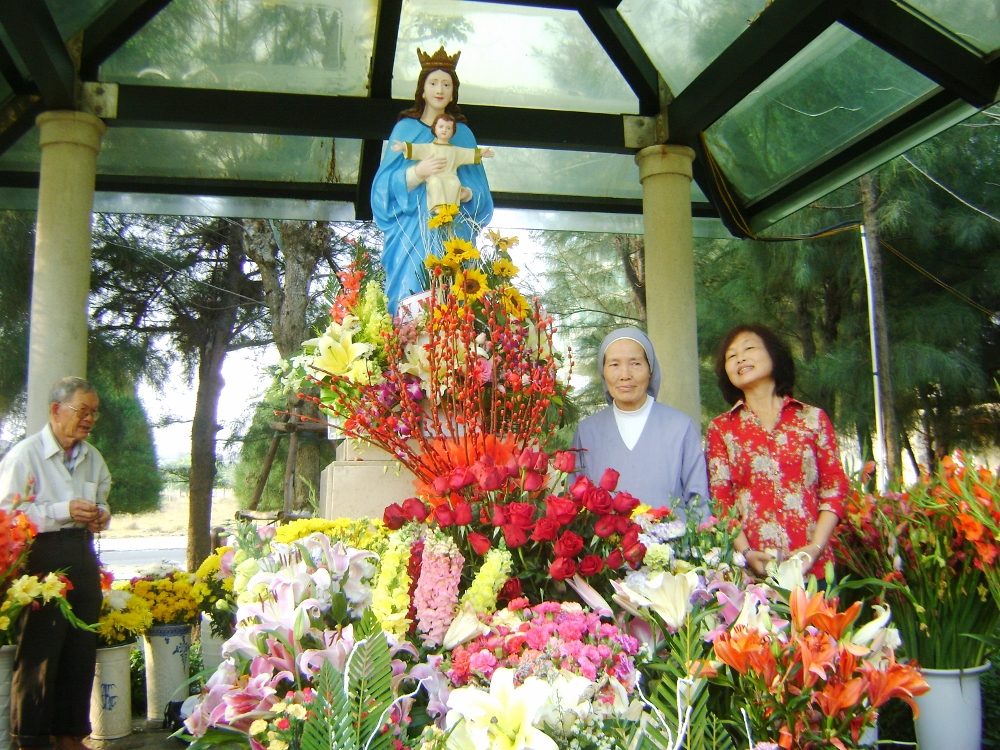 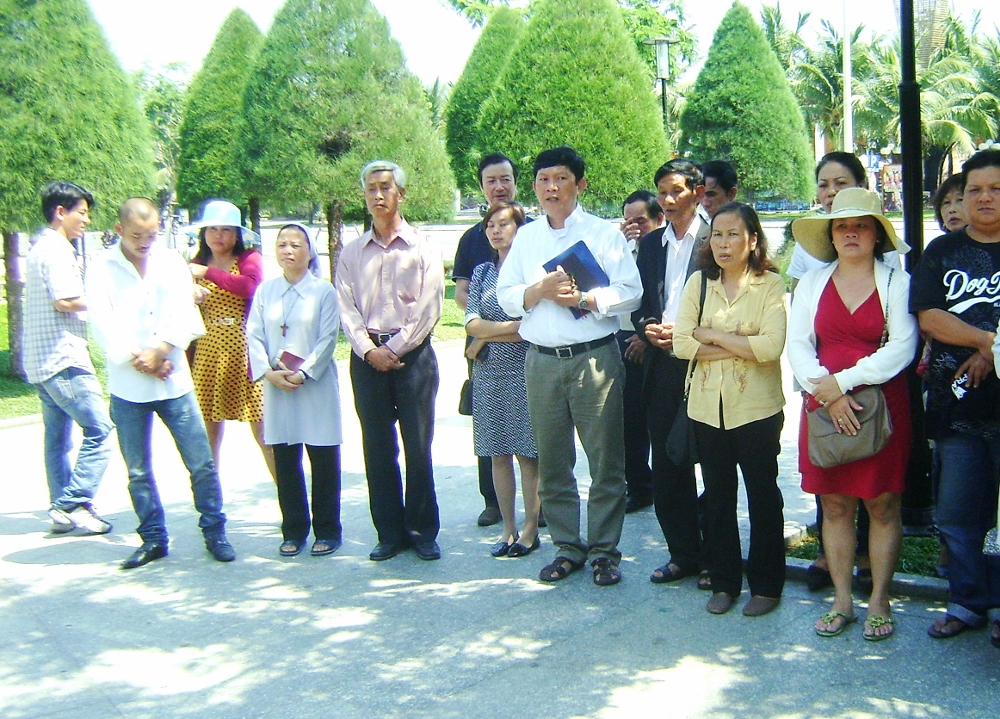