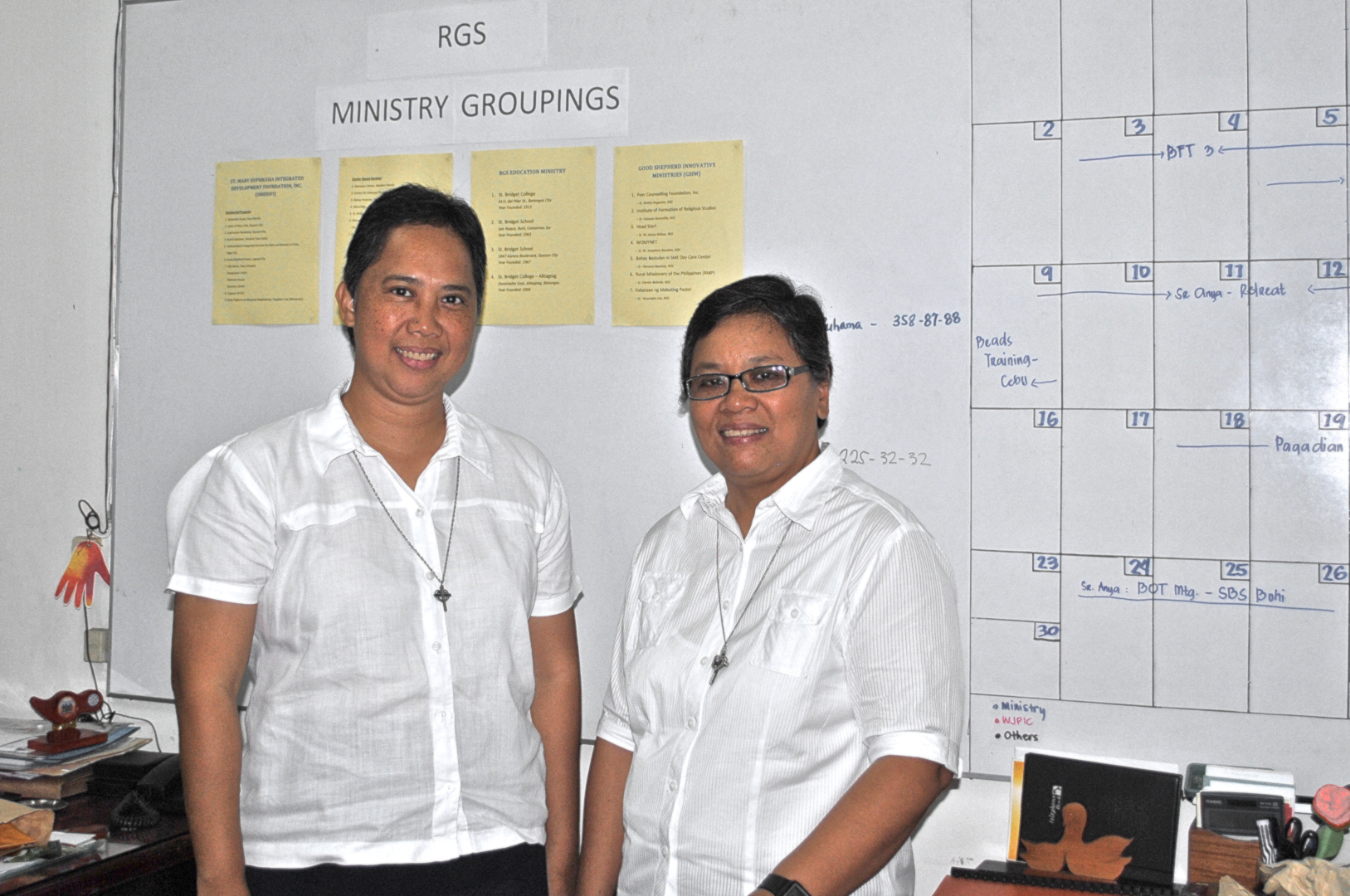 Quezon City, Philippines — Sr. Maria Añanita Borbon, 47, heads the Council for Ministry for the Philippine Province of the Religious of the Good Shepherd (RGS) and coordinates Ruhama Center for girls and women in Marikina City, east of Manila.

Borbon knows a lot about what multi-tasking entails. Armed with a master’s in educational administration and a Ph.D. in educational leadership and management, Borbon is overseeing the congregation's ministries, ensuring their sustainability and smooth transition of leadership. In an interview, she described how she juggles her time between assignments and ends up feeling “energized” by her engagement with people, especially young students.

Borbon told the story of reviving a program for exploited women after its internationally recognized founder and head, Sr. Mary Soledad, who was known as “Sr. Sol” Perpiñan, died in 2011 after years of suffering from rheumatoid arthritis.

Irish nuns arriving from Burma (now known as Myanmar) in 1912 established the congregation in the Philippines in Lipa, Batangas Province, just over 50 miles southeast of Manila. The nuns established their first Good Shepherd home for endangered women and girls in Manila in 1921. They later worked with  prostituted and battered women, slum dwellers, landless farmers, indigenous groups, overseas contract workers and their families, street children, or “the most neglected and oppressed” in various cities. In 1960 the Philippine Province was created.

What does your work as head of the Philippine Province’s Council for Ministry entail?

I represent the congregation as superintendent of our four schools. I'm a member of the Catholic Educational Association of the Philippines’ CEAP's superintendents commission. Our other ministries address problems and issues of migration, trafficking, ecological justice, economic justice and exploitation of girls and women. Those are our priority issues.

Our thrust for girls and women encompasses all our ministries. For example, when we responded to Typhoon Yolanda [Haiyan], our concern was to advocate for children's rights and to prevent the trafficking that could happen because of ecological destruction, displacement and separation of families.

Then why did you close down the houses for prostituted women established under the Third World Movement Against Exploitation of Women led by Sr. Perpiñan?

Our late Sr. Sol Perpiñan was able to establish five houses around the country to minister to prostituted women through her project. She ran the corporation with a legal identity separate from the Religious of the Good Shepherd Philippine Province. When she passed away, we [RGS] had difficulty with continuity because of some management issues.

Before Sister got very sick, there was no one in her staff who worked along with her in managing the foundation. Later, when she was sick, she could not monitor the operations anymore so there was a little difficulty in terms of transition. Eventually, after her death in 2011, the board of the Third World Movement Against Exploited Women decided to close shop for the meantime.

Who conceived Ruhama and why was it established?

The province decided to retain one of the shelters and to revive the ministry. We wanted to continue to address the needs of the prostituted girls and women, including those who are distressed because of migration, who are abused abroad and would be looking for houses for temporary shelter. After all, that’s our thrust. We can trace that thrust way back to the time of our founders Jean Eudes and Mary Euphrasia. We kept the house in Marikina and called it Ruhama. It’s the former Bethany Transition Home. 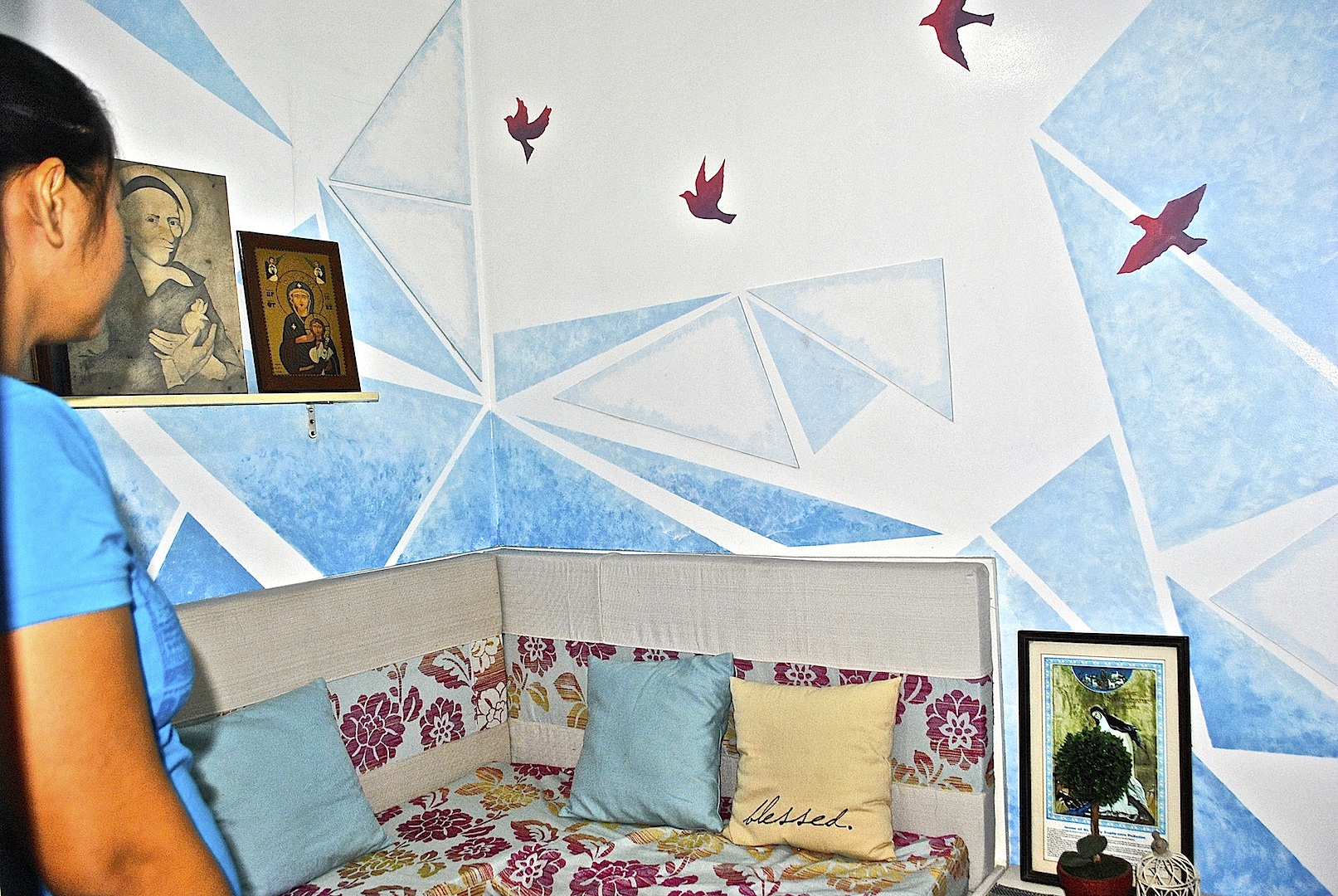 What is different with the new program?

We have not changed the program. We changed just the name and the structure. Our clientele are still in general exploited girls and women. In terms of programs, we are still giving them temporary shelter, educational assistance, counseling and psychotherapy, skills training and development and values formation.

This time Ruhama is under our congregation's foundation – St. Mary Euphrasia Integrated Development Foundation, Inc. The aim of the foundation is to oversee and monitor our programs to make sure they are legal and are certified by the Department of Social Welfare and Development. Our other programs are also under this foundation, including programs in the pastoral ministry.

What's the advantage of such a structure?

Do your centers still cater to sex workers?

Today we have one in Cebu City where the girls and women can just come to sleep, rest, take a bath, have their health check-up. We call it Welcome House-Cebu. It begins with the drop-in center located near many bars – just near the port. From there, we have a transition home where women can go once they make a decision to find an alternative way of life. At the drop-in, we also offer skills training, just to show an alternative way of making a living. But a lot of the women who go there aren't ready to leave prostitution because they are not yet capable or they have family to support. We don't force them because we cannot also offer them an alternative life. But those who are ready and express their decision to move on to another way of life are referred to our other center also in Cebu called Recovery Center.

In Recovery Center, the girls coming from the drop-in center are given shelter. They can stay for a year or longer. They are given long-term therapy and start a more intense rehabilitation program. Education and school needs are provided.

The Third World Movement Against Exploitation of Women allowed use of condoms by sex workers. What is the perspective of the new program on condom use by sex workers?

The view of prostitution is one of exploitation of the poor and needy, so I agree with letting the women use condoms. If the girl is sacrificed and endangered, condom use is necessary to avoid getting pregnant or catching some disease. She needs some protection. That is the perspective of our program, though there are some of us in the congregation who do not agree with it.

Do you have a transition program for prostituted women at Ruhama?

This is our difficulty with Ruhama. Our main concentration is supposed to be prostitution and human trafficking of girls and women. There are prostituted women and one cybersex victim in Ruhama, but our major clientele since we opened in 2012 has been girls sexually abused by their fathers, grandfathers, uncles, brothers.

Unlike Cebu, Ruhama is a temporary shelter where the girls can come for refuge. They are referred to us by the social welfare department, our own agencies, other NGOs.

How old are your clients in Ruhama and how many are they?

Our youngest is 8 and our oldest is 19. We have 15 clients now, which is the maximum that we can accommodate in our house. They live in a two-story building with two dorms. I had to refuse three [other clients]. We have no more beds.

What is the goal of the program?

The girls can be prepared to go back home. It is better in some cases that they are back with the family and that is our thrust, to help them return to their family – except if the perpetrator is in the family or the family situation does not contribute to the girl’s healing.

In our Recovery Center in Cebu and at any of the Good Shepherd houses we also say, ‘We are here to help you cope and to help you find some alternatives for living your lives.’ That's why we offer skills training and assist with educational needs, so that when they are ready then they can go back on their own.

Do you have psychologists or psychiatrists?

We have volunteer psychologists. Some of those referred to us by other agencies have their own psychologists. We have three girls under a program for free therapy through a center run by a CICM priest. I'm trying to work it out with him to take at least 10 in his program. 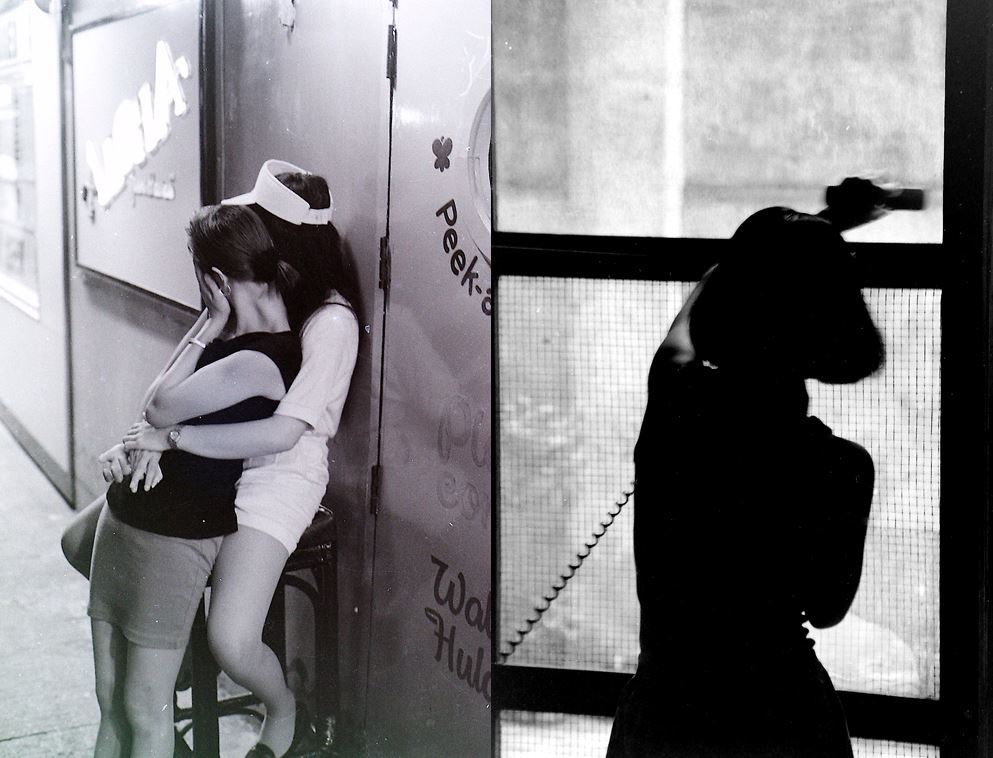 Left, Women call out to people to stop in the club where they work in Malate, Manila. Right, A woman keeps her eyes on the street, where possible customers may pass by her room at a motel in Manila. (Ed Gerlock)

Do government agencies give funds?

No. I was a little bit ashamed to ask the social workers who refer girls to us from the Department of Social Welfare and Development. But I realized that the government has a fund for women. I asked them for some support but no one has responded. I would also say, ‘How can you help us care for the girls that you are referring? Maybe even just give one sack of rice a month?’ Our 15 girls eat as much as two and a half to three sacks of rice a month. [These are 110-pound bags.]

Where do your funds for Ruhama come from?

Until very recently, our funds for Ruhama came from the congregation. I took over after the Third World Movement Against Exploitation of Women closed because I was one of the proponents of retaining at least one of the houses. Since I was very strong in opposing complete closure, Ruhama fell in my lap.

Donations stopped when we shut everything down so [our] province said we will support it because we see the need.

We accepted one girl after another, then benefactors started to come. Our first blessing came in January 2013 when the interior design department of U.P. Diliman [part of the state-owned University of the Philippines] offered to remodel our house. I was overjoyed when our sister told me that the U.P. group wanted to renovate.

They wanted to create a healing atmosphere and they knocked down dividers and were able to come up with two dorms. After January of last year, we went full-swing accepting, and we have not had a vacancy.

What is your working budget for Ruhama?

Our expenses reach 75,000 pesos [about U.S. $1,667] per month, for everything, including medical and salaries of the social worker and house parent. The biggest expense is food and utilities – electricity, water and telecommunications.

What about former benefactors?

It's another blessing that we have been able to re-establish ties and the former benefactors of the Third World Movement Against Exploitation of Women have started contributing again. It shows we have credibility.

How much of your monthly budget of 75,000 is coming from benefactors?

What is your biggest funding concern right now?

My main concern right now is where to get money for psychological treatment.

Q & A with Sr. Judith Moore, bringing together sisters in the South Pacific