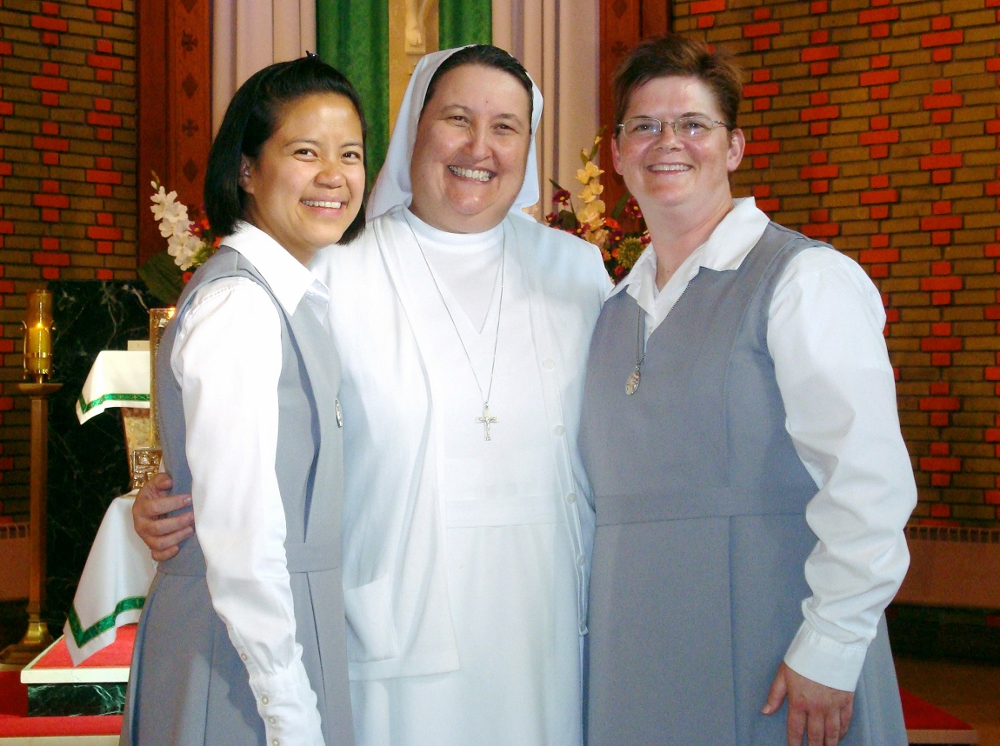 Sr. Jennifer Kane, right, stands with Srs. Elfie Del Rosario, left, and Phyllis Neaves following her official entrance into the novitiate in 2011. A 16-year military veteran who at one time was a missile systems engineer working on intercontinental nuclear weapons,Kane is preparing to make her first profession of vows with the Salesian Sisters of St. John Bosco in August. (CNS photo / courtesy of Kane)

Rochester, N.Y. — Salesian Sr. Jennifer Kane is a living conversion story, who has gone, she said, from "bombs to Bibles."

A 16-year military veteran who at one time was a missile systems engineer working on intercontinental nuclear weapons, Kane is preparing to make her first profession of vows with the Salesian Sisters of St. John Bosco in August [2013].

How does someone make the conversion?

"By the grace of God, that's the only thing I can tell you," Kane told the Catholic Courier, newspaper of the Diocese of Rochester. She said her vocational path "is long and it is crazy."

The Corning, N.Y., native is nearing the end of her fourth year with the Daughters of Mary Help of Christians, also known as the Salesians. She is set to make her first profession with the order's Eastern Province Aug. 5, the day after her 42nd birthday. Kane said she is confident that she's heading in the direction God wants her to go.

"There's always been the hand of God in all of this," she said. "God knows every move you make. He's got this all planned, if you're willing to accept his will and plan for you. Ultimately God gets you to the final destination."

The road to becoming a sister was long, following a path through the U.S. Air Force and the Air National Guard. Making a Cursillo in 1996 was her start.

Kane, who grew up in St. Vincent de Paul Parish in Corning, attended Clarkson University on an ROTC scholarship, graduating in 1993 with a degree in electrical engineering.

From there she served four years with the Air Force – all at Malmstrom Air Force Base in Montana – working on ICBMs aimed at targets around the world. It was there that she also grew in her Catholic faith, thanks to the Cursillo.

"It did change my life, it really did. It's just a great community of believers there in Montana," she said.

Kane concluded her active duty with the rank of captain. She joined the Montana Air National Guard in 1998 and considered becoming a chaplain's assistant, but instead transferred to the New York Air National Guard in early 1999. Operating out of Hancock Field in Syracuse, she worked full time as a weapons loader, fitting bombs, weapons and ammunition onto warplanes.

In 2003, she entered graduate school at SUNY Oswego, earning a master's degree in education more than two years later. However, military deployments beginning in September 2006 – three to Iraq and one to Saudi Arabia – made it difficult for her to commit to a full-time teaching position. During her third trip to Iraq, she reached a crucial juncture in her religious calling.

"There's something about being in the desert," she said. "I read my Bible all the time. There was a good two months of doing that. And when I came back, I knew I had to do something."

Kane said she had had thoughts of a religious life in earlier years without seeing them through.

"The call from God was definitely there. I guess I was in denial a long time. [I would say to God], 'I worked on nuclear weapons, I was a bomb loader, you can't be talking to me,'' she said.

Following the suggestion of a friend, she looked for a religious order that fit her interests of education and youth ministry. When the Salesians came up during one of her Internet searches, she recalled, "I looked at their website for quite a while."

After meeting with members of the order, she realized she was in the right spot. Kane formally ended her 12-year affiliation with the National Guard in 2009 and entered the Salesians, a congregation with more than 15,000 religious worldwide.

"When you walk into any Salesian house, a few things hit you," she said. "One is a sense of joy, the other is family spirit. When I entered, my soul felt at home. These are joyful people and their work with kids is to be commended. And the more I've progressed in my formation, it just confirmed my vocation as a Salesian."

Kane served one year as an aspirant and another as a postulant, and will end her two-year novice period at Sacred Heart Novitiate in Newton, N.J., by professing temporary vows in August.

Kane said her days are filled with "a whole lot of prayer and study," along with ministry to children. She is looking forward to serving in one or more of the order's specialty areas of staffing schools, retreat centers and campus ministries.

Despite her self-described conversion, Kane said she's "not at all" regretful of her military service. She acknowledged that Catholics have widely varying opinions on war – especially when it involves nuclear weapons – but emphasized that she would never relish the thought of putting such weaponry into action.

Kane said she feels that she remains basically the same person she always was, except that she's following a different path by being more open to God's call.

"Once you've truly experienced the grace of God and have committed yourself to what that means in your life," she said, "I don't think you're ever the same."

[Latona writes for the Catholic Courier, newspaper of the Diocese of Rochester, N.Y.]

Q & A with Cuba’s Discalced Carmelites