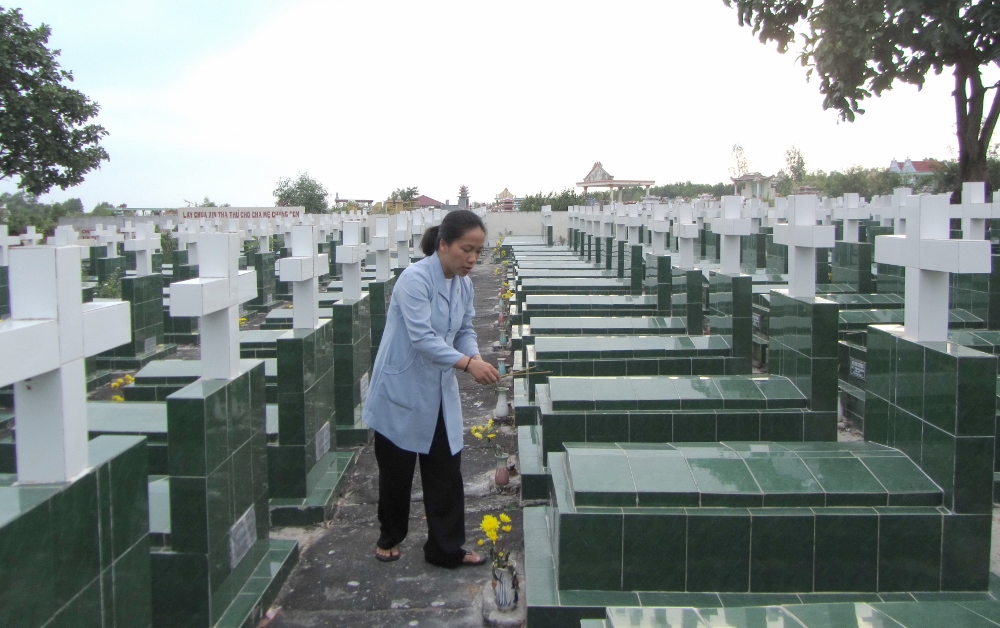 A nun of the Lovers of the Holy Cross of Nha Trang places incense sticks on tombs built by them at Dong Tien cemetery. (Teresa Hoang Yen)

Lagi, Vietnam — A decade ago, some Lovers of the Holy Cross of Nha Trang nuns noticed that over 30 graves were in bad condition at Dong Tien parish cemetery. The other tombs were decorated with incense, candles and flowers, as is customary in Vietnam to show respect for the dead.

The nuns took it upon themselves to weed the grass and wild plants from those neglected graves. They shaped them up and placed flowers on them. They burned incense and prayed for the people laid to rest there. This was during November, the month when Vietnamese Catholics commemorate the souls of the dead.

Local Catholics and people of other faiths were inspired by the nuns’ actions and started to cooperate with them to find neglected graves dotted around the area and rebury them in Catholic cemeteries.

“So far we have dug up over 2,800 neglected graves and built proper tombs for them at cemeteries. We look after them as we would our relatives’ tombs,” said Sr. Mary Nguyen Thi Thanh Mai, head of the community.

Sr. Mai had tens of her relatives’ graves reburied and said half of the untended tombs are the graves of those who died of starvation in her home parish of Loc Thuy, Ha Tinh Province, northern Vietnam, in 1945. An estimated two million people in the northern provinces died from famine  in 1944-1945 caused by extreme weather conditions that decimated crops – and because French and Japanese invaders took people’s food to serve their armies.

Most of the rest buried here are South Vietnam soldiers who fell during the Vietnam War that ended in 1975, she added.

The nuns’ convent is based in Lagi, central Vietnam’s Binh Thuan Province, where a former military cemetery of South Vietnam soldiers lies. The cemetery was slated to be cleared away by the government for public purposes. 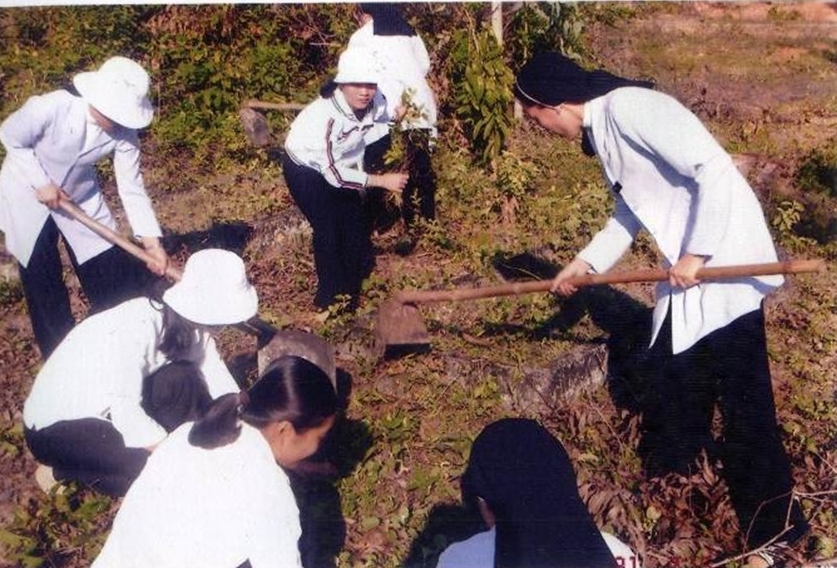 Lovers of the Holy Cross nuns digging up a neglected grave. (Courtesy of Fr. Nguyen Huu An)

Mai, head of the convent, said nuns and volunteers felt heartbroken at the sight of so many graves which were worn away by the weather, trampled on by cattle. Headstones had been removed, and coffins and human remains were starting to emerge from the ground.

Before digging tombs up, she said, nuns wore white mourning bands as way to receive the dead as their relatives, and they prayed in front of tombs along with volunteers. They put remains and their belongings into small coffins, took photos and recorded their identities so that relatives could recognize them in the future. Then they drove coffins to the cemetery for burial.

Earlier this month a hunter discovered a neglected grave without a headstone in a forest and reported it to the nuns. The nuns and volunteers disinterred it and gave it a decent burial at the cemetery.

They have built tombs each costing two million dong (U.S. $100) for neglected graves. Benefactors donated money to the project.

Volunteers clean and put incense sticks and flowers on renovated tombs on Wednesdays and Fridays during November.

Vietnamese Catholics often visit cemeteries during November, which the church in Vietnam dedicates to commemorating and praying for souls of the departed. Ahead of Nov. 2, All Souls’ Day, they restore their relatives’ tombs by weeding, cleaning and painting.

“The dead should be given proper burials because human bodies are the temple of the Holy Spirit,” she said. 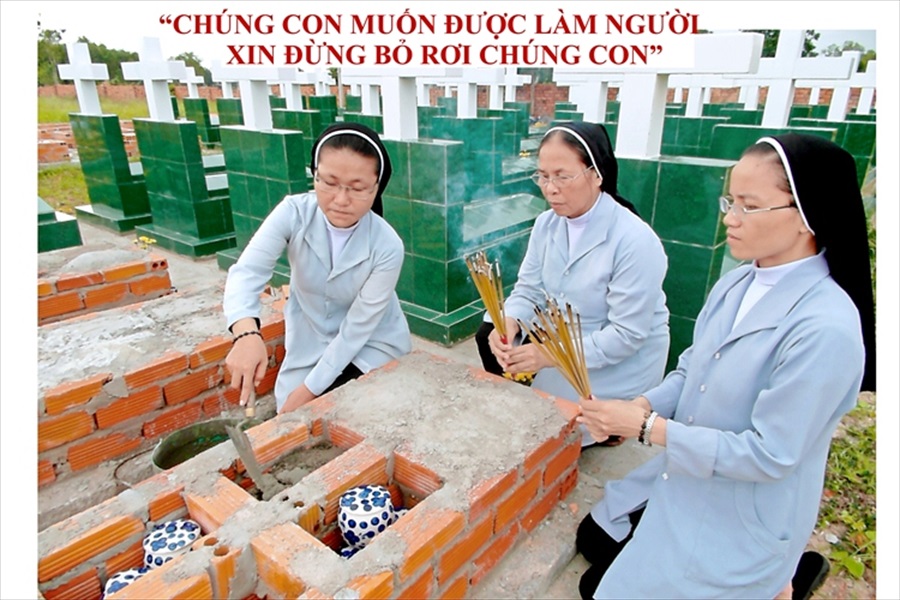 Sr. Mai, 59, said their aim is to raise public awareness of respecting, remembering and praying for the dead. “Many people visit those tombs and 17 people have identified tombs as their relatives’ ones,” she noted.

Fr. Joseph Nguyen Huu An, who serves as spiritual director of the nuns, said he appreciated the nuns’ initiative to renovate neglected graves and quoted a Vietnamese saying as, "People who need houses while alive also need tombs when they are dead.”

On Nov. 3 he held a special Mass attended by 300 people at Dong Tien cemetery to pray for aborted fetuses and tombs of soldiers and unknown people. He plans to celebrate another Mass to end the month dedicated for souls at the cemetery on Nov 30.

In addition to their burial ministry, the nuns also provide accommodation to unwed pregnant women, look after their children, daily food to 150 poor patients at a local hospital every day, and support people with physical disabilities. They also minister the Eucharist to patients every week.

[Joachim Pham is correspondent for Global Sisters Report based in Vietnam.]