by Dawn Araujo-Hawkins
This article appears in the Apostolic Visitation feature series. View the full series. 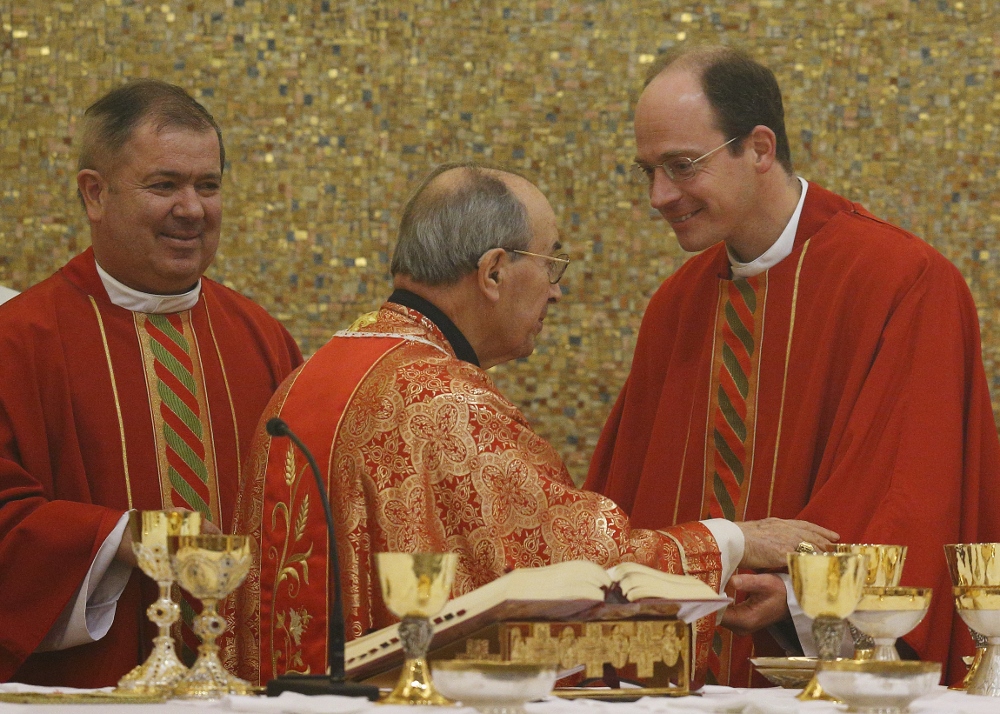 Cardinal Velasio De Paolis, the then-papal delegate in charge of governing the Legionaries of Christ, center, greets Fr. Sylvester Heereman, a member of the Legion’s general council during the sign of peace during a Jan. 8, 2014, Mass in Rome. At left is the late Fr. Alvaro Corcuera, then-director general of the congregation. (CNS/Paul Haring)

On Dec. 16, the Vatican will release the final report from its investigation of American women religious in 2010. Since the investigation, or apostolic visitation, was announced in 2009, it has been met with indignation from many U.S. Catholics.

One woman began collecting letters of gratitude to U.S. women religious. She told the National Catholic Reporter she planned to send copies to Mother Mary Clare Millea, the appointed apostolic visitor. Loretto Sr. Maureen Fiedler wrote that the visitation was “troubling” and that she was “appalled.”

Many Catholics also joined online communities to voice their opposition. For example, in the Facebook group “I Support Catholic Sisters and Nuns” one member claimed the visitation was an outrageous attempt by a “threatened” patriarchy to check a group of women who had eclipsed male clergy by ministering at the margins of society with the “potency of the feminine religious voice in a world so sorely in need of that voice.”

But while this specific visitation remains controversial, apostolic visitations in and of themselves are not uncommon. In fact, some scholars and theologians – including Sister of Charity of the Blessed Virgin Mary sister and The Power of Sisterhood editor Mary Ann Zollmann – point to the New Testament and St. Paul’s visits to Asia Minor as their model; and in the Middle Ages, papal representatives routinely made visits to Catholics throughout Christendom, though religious communities became exempt from these visits in the 11th century.

That being said, there have been at least 10 high profile visitations in the last 25 years – some to specific groups like the Legionaries of Christ and others to broader groups like, more or less, every Catholic institution in Ireland. Below is a synopses of some of the most newsworthy visitations:

In 1989, the Vatican sent Archbishop Vicente Joaquim Zico as an apostolic visitor to two progressive seminaries in Brazil: the Institute of Theology of Recife and the Northeast II Regional Seminary. According to a National Catholic Reporter article that same year, the two seminaries were “the largest source of progressive priests in Brazil’s impoverished Northeast.”

After the visitation, the Vatican ordered the two seminaries closed, citing their inability to adequately train priests.

Seminaries in Canada, Britain and Ireland

In 1993, apostolic visitors were sent to seminaries in Canada, Great Britain and Ireland in response to widespread claims of sex abuse by priests. In an address to Canadian bishops that year, Pope John Paul II said the visitation would allow them to “reflect on ways of improving the human, spiritual, intellectual and pastoral formation of priests.”

Per the visitors’ request, the Canadian Conference of Catholic Bishops released a revised program of priestly formation in 2002. Information about what was required of the British and Irish bishops – and how they responded – was not readily available.

Our Lady of the Angels Monastery

In the spring of 2000, there was an apostolic visitation to Eternal World Television Network founder Mother Angelica’s Our Lady of the Angels monastery. Conducted by San Juan, Puerto Rico’s Archbishop Roberto González Nieves, the purpose of the visitation was to investigate the connection between the monastery and the television network — at least according to EWTN anchor and news director, Raymond Arroyo.

However, before Nieves could write his final report, Mother Angelica resigned from her positions as EWTN CEO and board chair. Thus, the final report was never issued, and even today, outsiders know little about what occurred. EWTN did not respond to Global Sister Report’s requests for comment.

Seminaries in the United States

In 2006, an apostolic visitation to American seminaries was conducted in response to the church’s sex abuse scandal and the Vatican’s concern about the admission of gay men into seminaries and religious orders. In 2008, the team of visitors released their final report, stating that though “immorality … usually homosexual behavior” continued to be present, generally U.S. seminaries were sound.

The apostolic visitors recommended that seminaries do more to monitor how students were using the Internet and that bishops take more responsibility for the acceptance of diocesan candidates, rather than delegating the task to subordinates.

In 2009, Pope Benedict XVI ordered an apostolic visitation to the Legionaries of Christ, a congregation of priests, after it was revealed that its founder, Fr. Marcial Maciel Degollado, had sexually abused seminary students and had fathered children with at least two women.

Less than two decades after the first abuse-scandal visitation, another apostolic visitation to Catholic institutions in Ireland was initiated in March 2010 following more accusations of widespread sexual abuse by priests and religious. A team of visitors (including current LCWR president Immaculate Heart of Mary Sr. Sharon Holland) went to Ireland and in May 2012, the final report was released.

The visitors found that since the 1990s, the Irish church had become more aware of the severity of abuse claims and was working on finding an adequate response. Guidelines to improve the safety of children were issued – for instance, having clear child protection policies in place in seminaries.

The final report also noted a somewhat prevalent dissent from church teachings among Irish priests, religious and laity – “a serious situation” requiring “particular attention,” and the apostolic visitors stated that the configuration of Ireland’s archdiocese was not conducive to the New Evangelization. It was recommended that Irish Catholics collectively use the Year of Faith for “prayer, common reflection and instruction on the content of the Christian creed.”

From January to June 2011, the consecrated members of Regnum Christi – a lay movement sharing a charism the Legionaries of Christ — was visited by Bishop Ricardo Blázquez of Valladolid, Spain.

The visitation to the men and women religious of Regnum Christi focused on their relationship with the Legionaries – specifically their perceived lack of autonomy. Accordingly, after the visitation’s final report, Cardinal De Paolis, who was also appointed papal delegate to the Regnum Christi movement in 2011, issued a number of guidelines, including remanding important decisions regarding consecrated members (e.g. the admittance of new members) to himself.

Although the Legionaries of Christ’s new constitution has been approved, the Vatican says the revised Regnum Christi constitution is still in process.

In December 2011, the Vatican sent Hungarian cardinal Peter Erdo to visit the Pontifical Catholic University of Peru. According to the Vatican, since 1990, it had been asking the university to rewrite its statutes in order to better reflect a (then) newly drafted document outlining the identity and mission of Catholic colleges. Furthermore, the Vatican would later report, since 1967, the school had amended its statues several times “in a way that has severely injured the interests of the Church.”

The university’s rector wrote to the Vatican stating that until the Lima archbishop – with whom the university was engaged in a battle over property willed to the school – renounced “control” of the university the statues could not be changed. Ultimately, in 2012, the Vatican forbade the school from using the terms “Catholic” or “pontifical” in its name, although the school has refused to change its name.

Franciscans Friars of the Immaculate

In 2012, Pope Benedict XVI commissioned an apostolic visitation to the traditionalist Franciscan Friars of the Immaculate after reports of internal strife and pastoral issues. According to the Vatican, during the course of the visitation, “74 percent of the members requested, in writing, an urgent intervention by the Holy See to resolve problems within the institute.”

The Vatican complied. At visitation’s conclusion, Francis – who had since become pope – appointed Capuchin Fr. Fidenzio Volpi to oversee its governance. The group made headlines again last year when Francis forbade their use of the Old Rite Latin Mass without prior authorization. This summer, Francis closed the order’s seminary.

In March 2014, the Vatican announced that three apostolic visitors would investigate the Priestly Fraternity of St. Peter, another traditionalist order. The on-going visitation — conducted by a team that includes bishop emeritus Fabian Bruskewitz of Lincoln, Neb. — is expected to conclude at the end of this year.