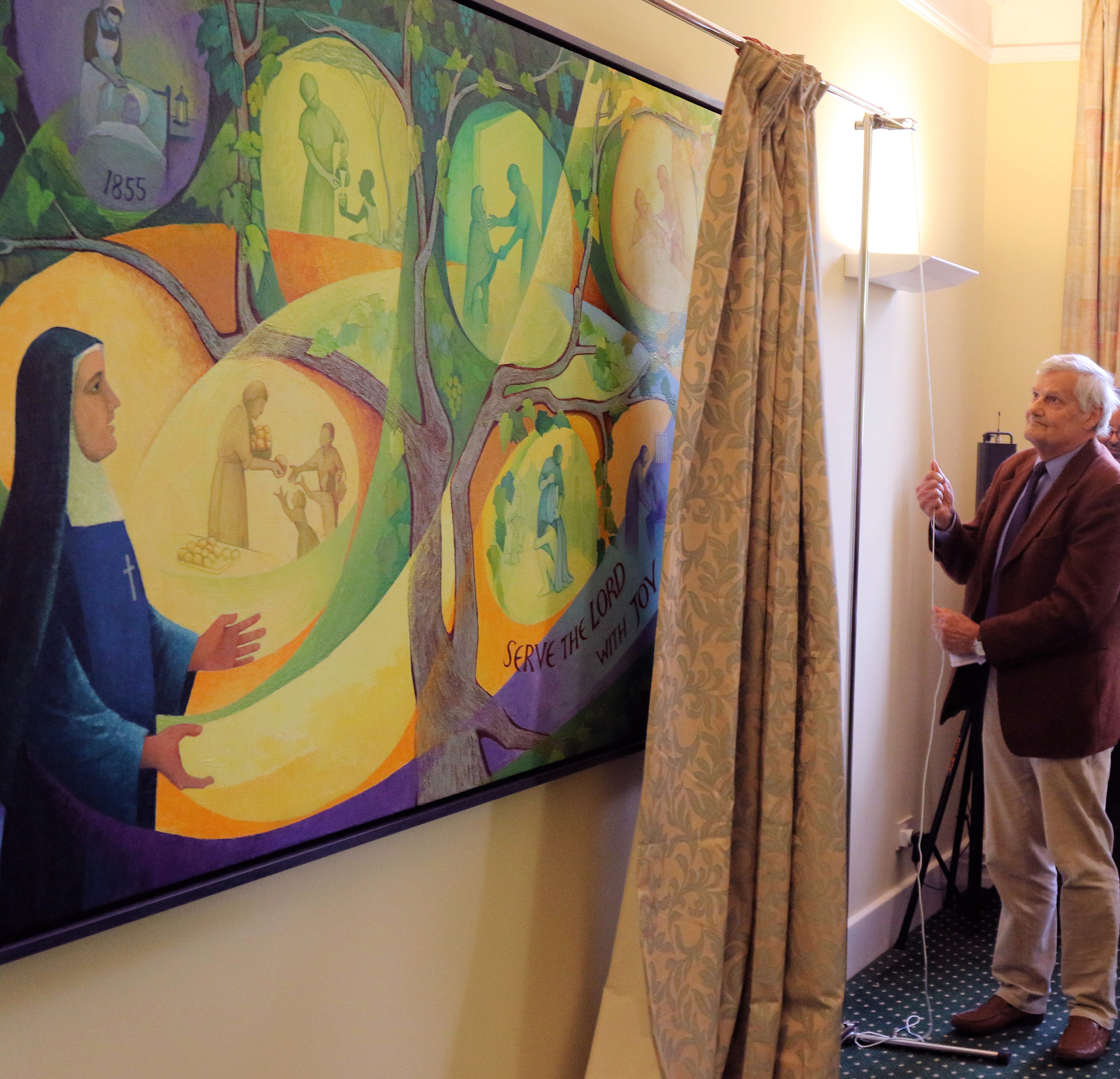 London, England — When Mother Joanna Jamieson went back to art school after more than 60 years in a Benedictine convent, she was likened by one British national newspaper to an "intergalactic time traveler" who hadn't heard a record by the Beatles or seen a James Bond film.

After training as a mural painter in the Glasgow School of Art, she joined Stanbrook Abbey in 1956, the year Elvis Presley made his debut television appearance and Cuba was in a state of revolution.

After a monastic life that involved two 12-year terms as abbess, she emerged from the cloister in retirement to undertake a one-year refresher course at the Royal Drawing School in London, where she studied, well into her 70s, alongside some of the most aspiring and trendy art students.

Her presence there caught the attention of newspapers like the Sunday Times, but no one was quite sure what to expect.

Jamieson has since produced two murals. The first showed the rebuilding of Buckfast Abbey in southwest England and, when it was unveiled in April 2014, was acclaimed as "accomplished" and a "stupendous work" by the editor of the British Art Journal.

The second, unveiled at a Sept. 26 ceremony in the Kairos Centre in London, depicts Mother Magdalen (Frances) Taylor, who founded the Poor Servants of the Mother of God. Pope Francis declared her venerable, a step toward sainthood, in June 2014.

Presenting the mural, 7 feet by 4 feet, Jamieson, now 82, joked about a "swoosh effect" of curves that connect a series of vignettes of the corporal works of mercy and other aspects of the piece.

She was perhaps understating the intricacy of her creation as she was borrowing a technique pioneered by Lyonel Feininger, the 20th century German-American expressionist who used overlapping triangular planes of light to convey depth, space and movement. 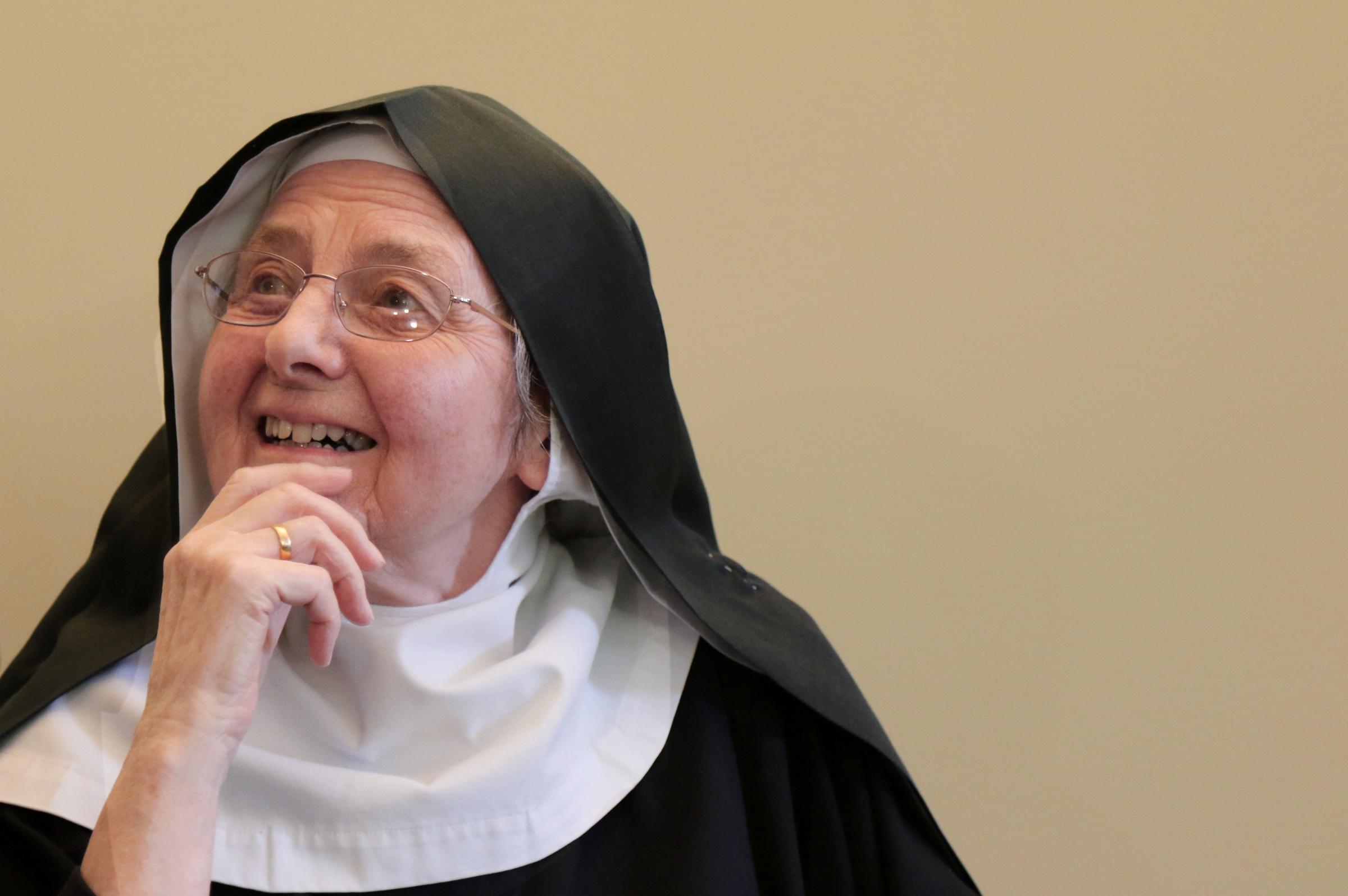 Mother Joanna Jamieson during the Sept. 26 unveiling of the mural of Venerable Magdalen Taylor at the Kairos Centre in London (CNS / Simon Caldwell)

Jamieson favors the technique and used it in both commissions because she believes it helps to create the sense that her subjects are alive.

"The large interlocking curved shapes attempt to depict the dynamic flow of the sap of the Spirit through the branches to produce the fruit," she told her audience Sept. 26.

"The flow of movement embracing the vine, Mother Magdalen and sisters endeavors to convey the interpenetration of past, present and future," she said.

Mother Mary Whelan, superior general of the Poor Servants, a congregation active in the U.K., Ireland, the U.S., Venezuela, Kenya and Italy, told CNS on Sept. 26 that she asked Jamieson to "capture our charism" when she commissioned the painting to mark the proclamation of Taylor as venerable.

"Joanna has picked up the vibrancy of life and the sense of life in there," she said.

The painting, created over three years using acrylic on linen, is going to be Jamieson's last public commission, however. She now will paint only for pleasure.

She has, after all, worked on commissions for the past six years. The Buckfast mural alone involved the design, drawing and painting of 20 panels to create an assembled work that spans 26 feet by 18 feet.

Jamieson labored on the project six days a week, stopping only for bouts of hip surgery. Retirement, it seems, can sometimes be exhausting.

The struggle to find #justLOVE in times of hate

Q & A with Jyoti Thottam, exploring the international history of an Indian hospital