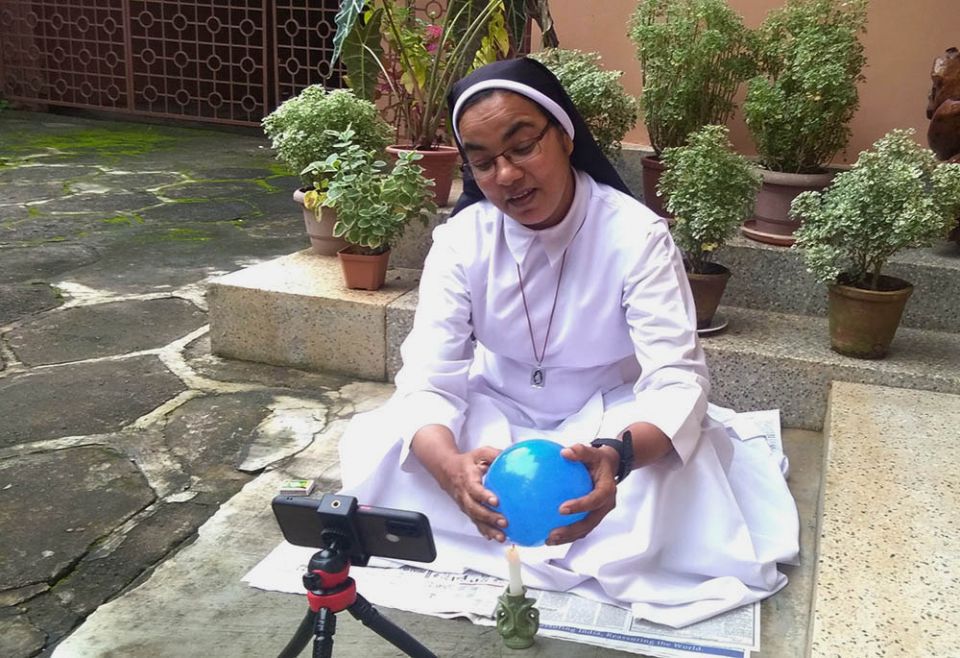 Sr. Sunitha Ruby, a member of the Congregation of Carmelite Religious, records a motivational video on her mobile using a balloon to make a point, at her convent in Thiruvananthapuram, capital of Kerala state, southwestern India. (Lissy Maruthanakuzhy)

THIRUVANANTHAPURAM, India — For Sr. Sunitha Ruby, a nationwide lockdown to contain the coronavirus pandemic has proved a blessing in disguise.

"Everything had come to a standstill. So, instead of putting a full stop, I wanted to continue my ministry," recalls the member of the Congregation of Carmelite Religious, who teaches catechism and also counsels youth in the southwestern Indian state of Kerala.

So, she took to YouTube to remain in touch with her young friends and others, who now call her "YouTube Sister."

The Indian government imposed the lockdown first on March 24, 2020, and it lasted several months with gradual relaxation. In April 2021, several states, including Kerala, reimposed the lockdown after they were severely hit by the COVID-19 second wave.

Ruby says the lockdown gave her an opportunity to "sit with Jesus for long hours, listen to him and talk to him as a friend. That energized me to seek new ways to reach out to my people."

Until the lockdown, Ruby's service was limited mostly to the Latin Archdiocese of Trivandrum where she worked as a teacher, social worker, motivational speaker and retreat preacher. (Trivandrum is the Anglicized name of the city's ancient name, Thiruvananthapuram. The city is some 1,765 miles south of New Delhi, the national capital.)

She also serves as a facilitator (animator) of the Kerala unit of Jesus Youth, a Vatican-approved international Catholic movement. 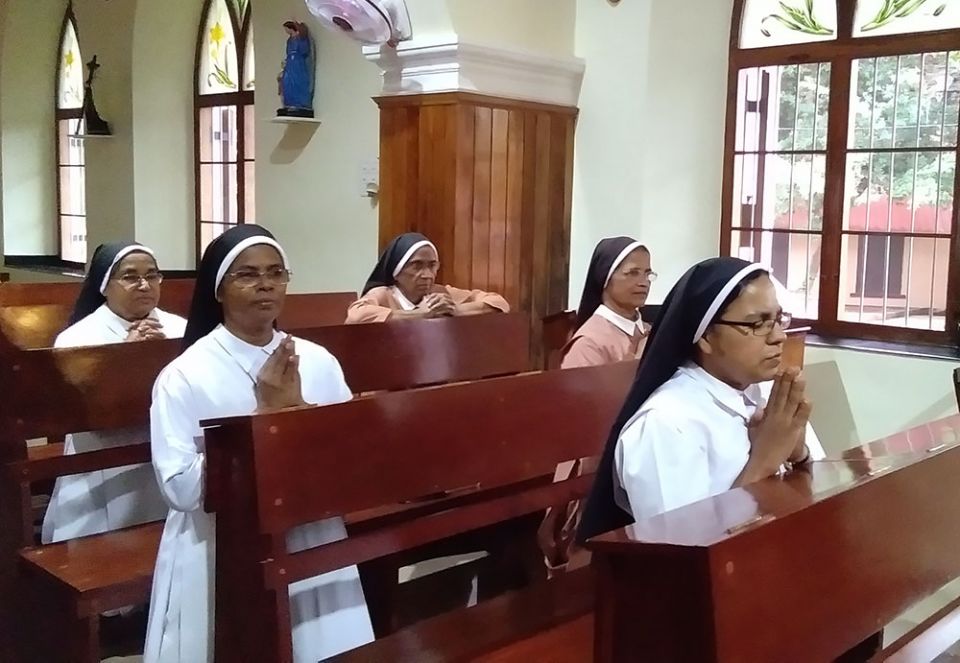 Ruby says prayers and Bible reading during the lockdown emboldened her to do something more for her people. "The lockdown was a period of blessing for me. It compelled me to look for a new way," the 39-year-old nun told Global Sisters Report.

One of Ruby's admirers is Bindu Dixon, a librarian and a local member of Jesus Youth. "When we feel down it is enough to look at her face, even if it is on her YouTube channel. We get energized," she told GSR. Dixon finds Ruby always "shining with grace, full of the Holy Spirit."

Another admirer is Susan Alex, who teaches in Holy Angels School in the Kerala capital of Thiruvananthapuram where Ruby taught until her transfer in October.

"I am what I am today because of her," Alex, a mother of three, told GSR, recounting how Ruby had helped her when her teenage daughter was having problems.

"She deals with everyone with the innocence of a child. We can approach her over the phone any time. In lockdown we used to begin our day with her message on YouTube," she added.

Alex also says Ruby was her school's strength, as teachers, parents and students found a refuge in her even before the pandemic. "She overflows with Bible quotes. Her approach to people reveals her life is rooted in prayer," Alex added.

Ruby, who is now completing a doctorate in social work, says that until the lockdown her ministry was limited to the Trivandrum Archdiocese and neighboring dioceses of Quilon and Neyyanttinkara. "The lockdown helped expand my ministry. I now reach people beyond Kerala through online," she explained.

Ruby says she has now reached across the globe through Google Meet. She allots them time at night as it is convenient for her to attend to them. She also gives classes for first Communion candidates, and prepares talks for mothers' associations.

She is often invited to address classes in parishes, share the word of God, and conduct online catechism for Kerala immigrants in Canada. People from Canada, Kuwait, and Qatar, besides India, call her for counseling. Parish priests and others refer her to parents and students. She gives motivational classes to youth and adults. Earlier she had also served as a counselor in the school where she taught. 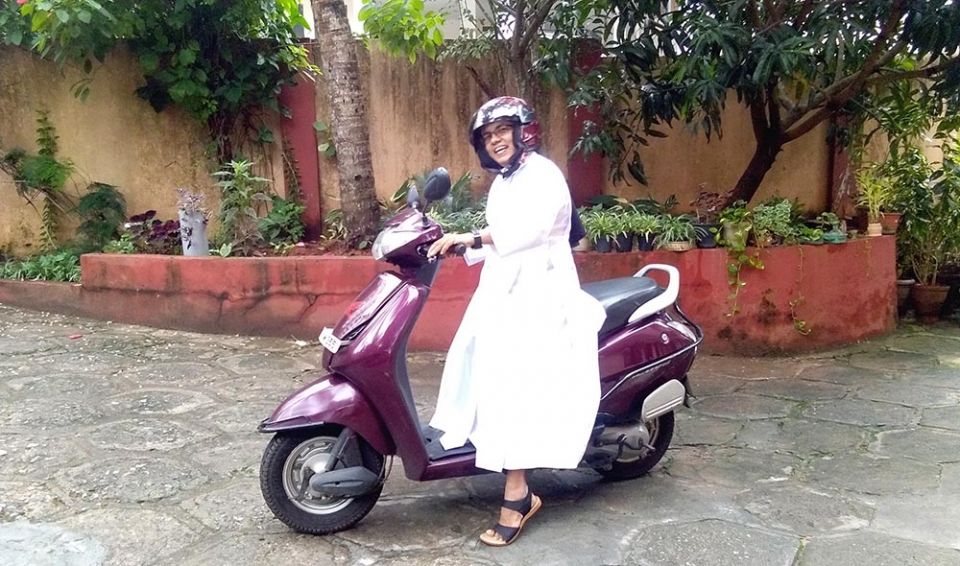 Sr. Sunitha Ruby, a member of the Congregation of Carmelite Religious, on her way to her mission from her convent in Thiruvananthapuram, Kerala, India (Lissy Maruthanakuzhy)

She does catechesis geared to young people. Teachers and parents also go to her for counseling.

She has so far uploaded 121 videos on her YouTube channel, "Sunitha CCR," which has now 8,450 subscribers as of Jan. 7. She launched the channel in March 2020, after the lockdown started.

"I had no one to guide me and my congregation is involved mainly in education, but it encouraged my new venture," she said.

Learning by trial and error, Ruby soon realized that her videos have to be short, attractive and creative to draw young people. "They have to throb with the pulse of the youth, who are not much interested in spirituality. My videos must invite them, without sounding to be preaching," Ruby explained.

Her short videos, which are mostly in Malayalam, deal with topics such as motivation, anger, spirituality, love, relationship and encouragement. "At first they were uploaded on the diocesan channel. Now four channels [belonging to Catholic charismatic groups] are uploading my videos, besides my YouTube," Ruby said.

She uses activities to make her videos attractive. "Sometimes I take a balloon, pencil, needle, candle, matchstick, water, different colors and fruits as examples to explain the message," says Ruby as she gets ready to shoot another video of herself on her mobile phone.

"I realized when we use practical examples with the help of small items, the message is clear, and easy to grasp. The viewers are happy and remember the message, whatever their age."

Ruby has no soundproof studio in her convent, which is on a busy road. So, she has to wait for quiet times to shoot the videos. She completes most videos at the first attempt as she prepares well beforehand by writing in a notebook and practicing it in her mind.

"When we want to do something for God, he arranges everything for us," she said, brushing aside such inconveniences. She is, however, grateful to her companions, who help her do her work.

When Ruby goes out to give seminars and retreats, her superior, Sr. Angel Thomas, would explain to older senior sisters in her community why she is absent for prayers and other community activities. "She would tell them that we have to adapt our mission according to the signs of the time," Ruby said.

Ruby is grateful to Thomas for allowing her to take the scooter when she was transferred to Marion Villa Convent at Kumarapuram, 4 miles from her previous place. "She continues to encourage me at every step," said Ruby, one of two nuns who drive scooters in the province. 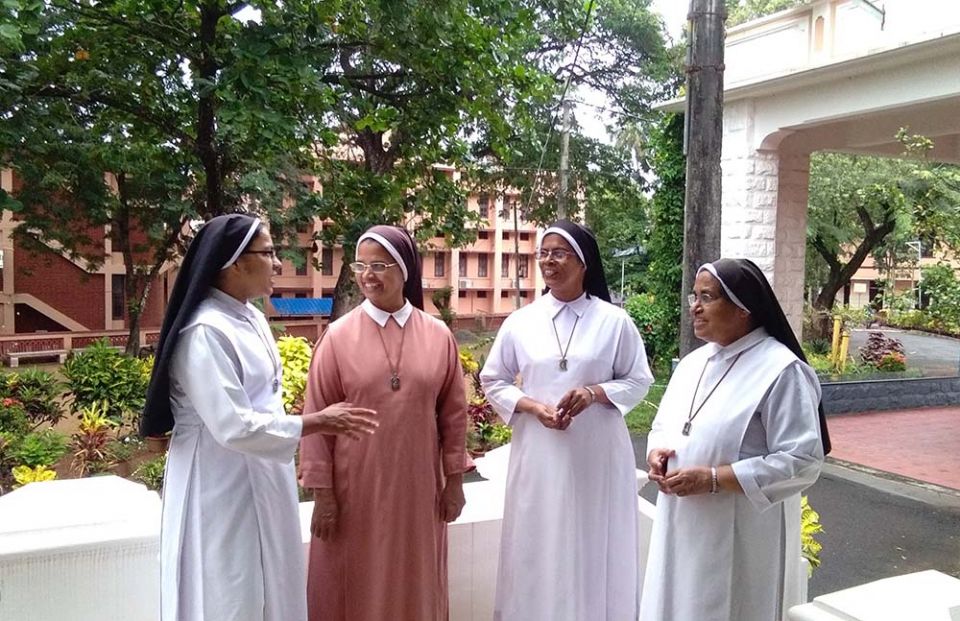 Nuns in the Kumarapuram convent also help her. "My new community had no Wi-Fi connection. Sister Mary Alice, the school principal, got everything done so that I could continue my mission without a break," Ruby said.

Sister Mary Alice says she cannot do much in social media as she is busy in the school the whole day. "So I encourage her because we can reach a large group of youth through YouTube," she told GSR.

Ruby credits her entry into YouTube to Fr. Laurence Culas, a former director of the archdiocese's pastoral ministry.

The priest says he had advised Ruby to use the social media platform to motivate her catechism students. Ruby "is a very dynamic person who approaches situations very positively and creatively," he told GSR. "We were confident that she would use innovative ways as had done for seminars for youth. She chose YouTube and we encouraged her." 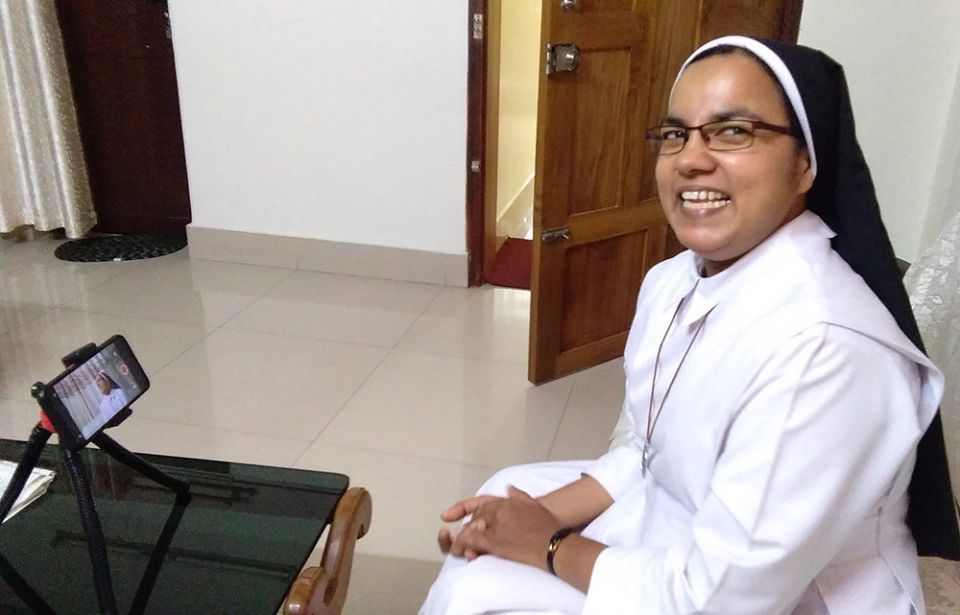 The priest also says that Ruby has reached out to areas where nuns usually do not reach, as a teacher, student, motivational trainer, and preacher.

Ruby wants priests and nuns to focus on families to make them strong in faith and relationship. "We have to organize retreats for youth in their style and the way they like — colorful," she explained.

The youth counselor says young people meet people from other countries on online sites and build relationship in imaginary rooms. "Parents and adults should learn to use modern gadgets to monitor children," she said.

Ruby began as a primary school teacher after her first profession. After a year, her superiors asked her to study social work, seeing her involvement with people around. When she completed a master's in social work in 2015, the congregation asked her to start its first social service center at Thiruvananthapuram.

Sister Mary Alice says people come to the convent to seek Ruby's advice. "She visits families and helps reconcile estranged couples. We allow her to use all her talents for God's people," the principal added. 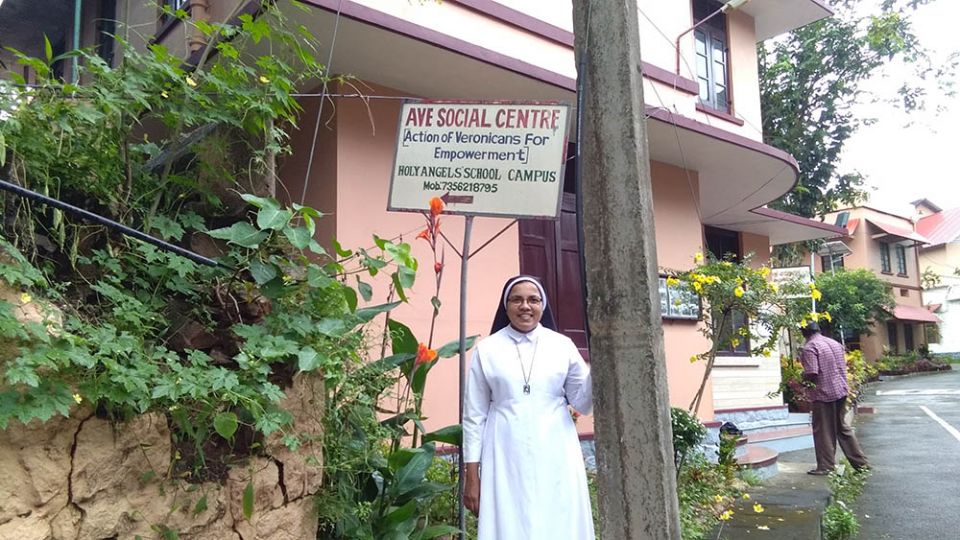 Sr. Sunitha Ruby, a member of the Congregation of Carmelite Religious, stands in front of the AVE Social Service Centre she started at her convent premises in Thiruvananthapuram, Kerala, India. (Lissy Maruthanakuzhy)

Ruby's visitors are often educated but jobless youth, and those with love failures and video game addiction. She also deals with cases of suicide attempts.

People with no hope in life lose creativity; some have no interest in studying, she said. Many lack self-confidence and self-appreciation. "I make them talk up to a point until they gain strength to manage their life," Ruby explained.

Ambika Robin, a teacher of 18 years, says Ruby's friendliness attracts anyone in any age group. "We can sense her closeness to Jesus," Robin said, noting Ruby's frequent references to the Bible. "She explains Jesus' message in a very simple way, which is the result of her deep prayer life," she told GSR.

Sini Fernandez, a college student who has only watched Ruby online, says she likes the nun's YouTube presentations, which are crisp and short. "The message is very clear and straight," she told GSR.

Ruby says her closeness to God has made her social media ventures successful, although she has no media education. "Otherwise, I would not have been able to enter this field as a member of a rather conservative congregation," she said.

"God gives me inspirations and creative ideas," she said. 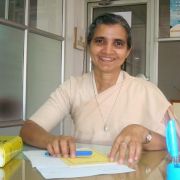 Lissy Maruthanakuzhy is a member of the worldwide Congregation of the Daughters of St. Paul in India and a correspondent for Matters India, a news portal that focuses on religious and social issues.

Arts and Media | Sr. Sunitha Ruby in India reaches out to young and old via YouTube

Q & A with Sr. Rini Rose, making rosaries and praying for those who need it

Q & A with Sr. Lucy Kalappura, expelled by Franciscan Clarists after public protests

Chainsaw-wielding nun just 'wanted to help out' after Hurricane Irma

Do not fear to hope: Liberia martyrs