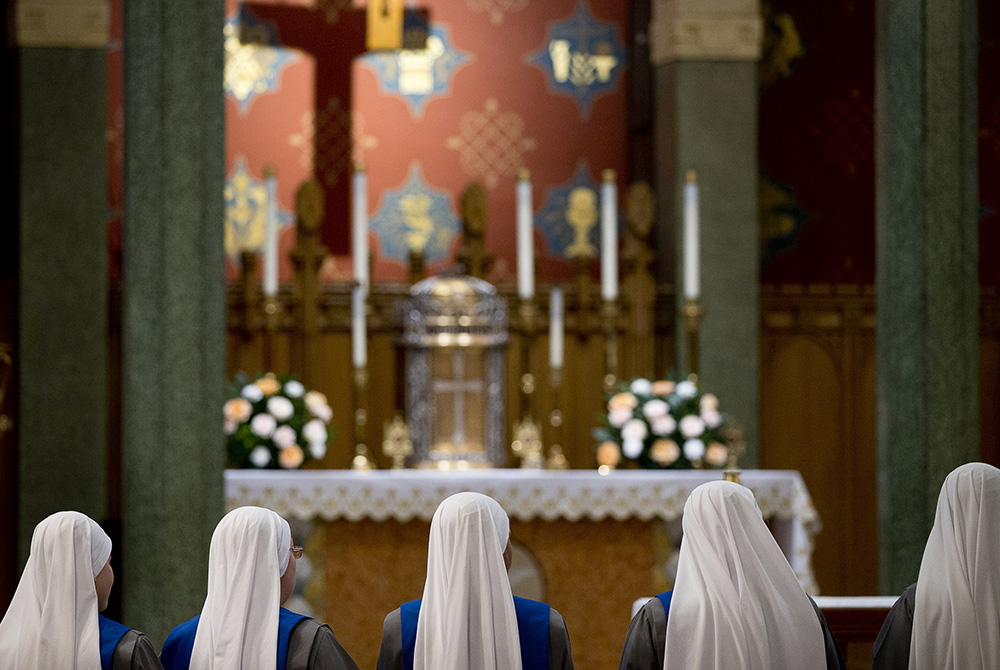 Novices of the Servants of the Lord and the Virgin of Matara are seen at Holy Comforter-St. Cyprian Catholic Church Nov. 1, 2017, in Washington prior to the start of their profession of vows ceremony. The Center for Applied Research in the Apostolate conducted a recent national survey of new religious members, including those who professed their final vows or commitment within the last 15 years. (CNS/Tyler Orsburn)

As women and men religious in the United States become more diverse both culturally and ethnically compared to previous generations, leadership and membership of their religious communities face the challenge of learning how to welcome new members and adjust religious life as they know it to these new cultural changes, according to a recent study.

Georgetown University's Center for Applied Research in the Apostolate conducted a national survey of new religious members, "Cultural Diversity in Vocations to Religious Life in the United States," which sampled current candidates/postulants, novices, those in temporary vows or commitment and those who professed their final vows or commitment within the last 15 years.

In addition to examining the cultural backgrounds of the new members, the February survey also examined familial and parochial factors that affected vocational discernment as well as the openness of the respondent's religious institute to cultural diversity.

Of the 231 respondents who are not members of their institute's dominant culture, many elaborated on their observations or the specific challenges they've encountered, including "a presumption that the dominant culture is the best"; frequent reminders (though sometimes done endearingly) that one is the minority in the group; the glazing-over of the diversities within the "generic label of 'Asian' " or Latino; the misunderstanding that comes with one's background being particularly rigid with rules, which can "come off as being cold or distant or impersonal"; and the expectation that the individual learn about the dominant culture while others are not expected to learn anything about the minority culture.

Among the respondents, whose average age was 36, two-thirds who entered religious life since 2005 were white (68%), while the remaining third were either Asian (12%), Hispanic (11%), Black (4%) or another ethnicity (5%). Consistent with previous CARA studies, the survey noted, newer members are more diverse than the overall population of the perpetually professed.

Among survey participants, 91% were raised Catholic.

"Family-related factors," the study found, had "some" or "great" impact on 72% of religious priests, brothers and sisters as they discerned religious life. And those who were born outside the United States had a higher likelihood that their family lives had a "great" impact on their discernment compared to those born in the United States, particularly those of Caucasian or European descent.

But five factors regarding family life had "great" impact on respondents regardless of ethnic backgrounds: About 6 in 10 respondents pointed to getting to know a priest or a religious brother or sister outside one's family and/or attending religious services as a family, while nearly half noted their parents instilling in them a prayer life (51%), an active parish life as a family (46%), and/or a sense of religiosity in their family (45%).

The survey also reported on the correlation between the ethnic makeup of the religious community in which one lives and the cultural challenges that follow.

Though half said they live in a community with members of a variety of cultural/ethnic backgrounds, the 7% of respondents who are the sole member of their ethnic background within their community, the survey found, are especially likely to report feeling "somewhat" or "very" challenged in the following ways:

Others reported more openness, with 9 in 10 respondents saying their communities are either "somewhat" or "very open" in welcoming those of different backgrounds in initial formation as well as in recruiting candidates from different cultures and accommodating families visiting from their respective countries.

While men religious were more likely to report their institutes being "very open" to incorporating other languages into their liturgies and prayers, as well as encouraging members to learn another language, women religious were more likely to report being "very open" to educating community members about another culture and celebrating the holidays of different cultures.

Still, respondents who answered the open-ended questions listed a host of assumptions from the dominant culture within the institution.

"Because both of my parents come from cultures that are generally more 'reserved' than 'mainstream American' culture, I tend to communicate in a more restrained / less emotionally expressive way than most of the other Sisters in our community," one respondent wrote. "I think this has sometimes been misinterpreted as lack of interest or enthusiasm. There have been some times when other Sisters have made inaccurate assumptions about my views or feelings about various things based on my cultural background."

Another wrote about the insecurity that comes with not knowing about social norms and being too reserved and hesitant to ask questions.

Generation challenges abound, too: millennials report a disconnect with the older generations, even when they share a culture.

"I have experienced generational challenges more than cultural challenges," one respondent wrote. "My generation is criticized and put-down often. I do not believe the other community members are aware they do this."