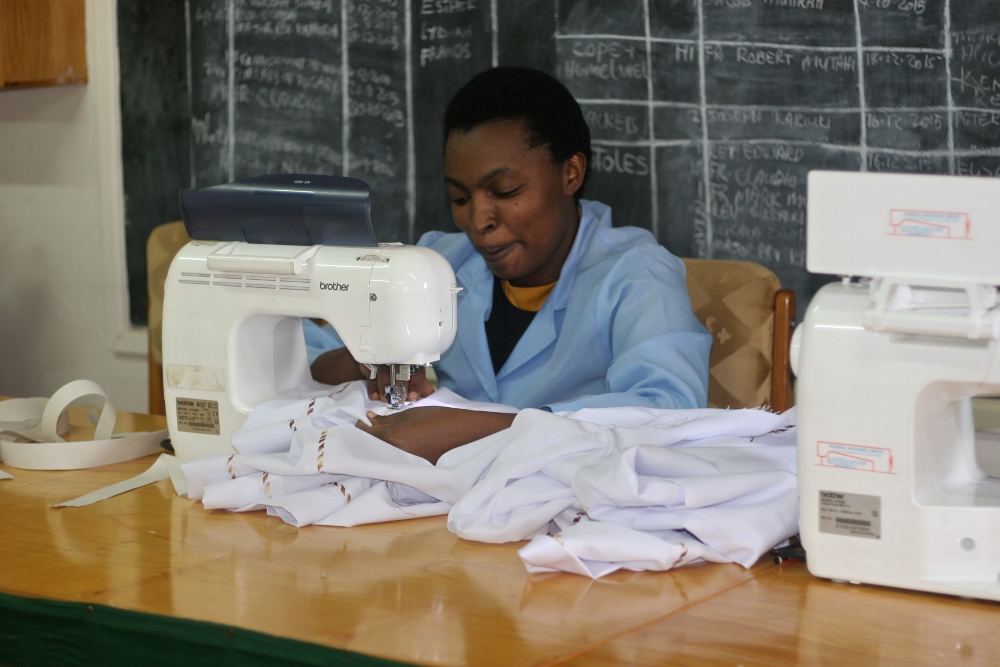 Women who are making the vestments for the papal Mass in Nairobi have been working around the clock to meet the deadline. (GSR photo / Lilian Muendo)

Nairobi, Kenya — When the Vatican confirmed that Pope Francis would visit Kenya later this month, women from the Dolly Craft center in Nairobi asked to celebrate the pope with three handmade vestments.

The Vatican approved the request, and the women began to sew.

"They are our gift to him," said Sr. Ida Lagonegro, superior of the Dimesse Sisters in Nairobi and the leader of Dolly Craft. "We also made him a rosary with beautiful beads."

Dolly Craft, which gets its name from its initial project of making African dolls, is an income-generating facility in Kangemi, a slum about 20 miles from the capital. The majority of the people in Kangemi moved to the city from rural villages to look for work to support their families.

"The women here are now able to put food on the table and pay school fees for their children. Their families' basic medical needs are covered, too," said Sarah Ndung'u, Dolly Craft's secretary.

For their special project, the women took design samples they made to the bishops in charge of the preparations for Pope Francis' visit. The bishops approved the designs and gave the women a logo to include on the three vestments.

"There are many other people who make church vestments. But the bishops liked our work most," says Mary Njue, the supervisor of the papal vestments project at Dolly Craft. "We have made vestments for them before, and it was not hard to convince them that we would make the best for Pope Francis." 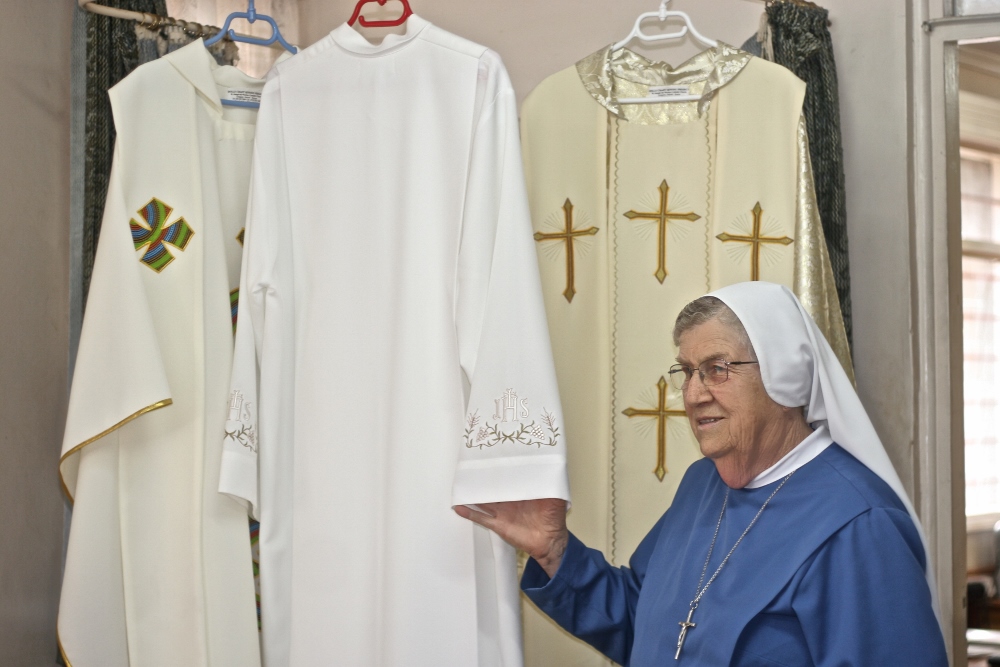 Sr. Ida Lagonegro shows the vestments that Pope Francis will wear during his visit to Kenya created by the women at Dolly Craft. (GSR photo / Lilian Muendo)

The women designed three garments for the pope's main functions while he's in Kenya: a simple white ankle-length alb, a classic golden sleeveless chasuble, and a white chasuble embroidered with a Maasai tribe design in colored beads.

Njue said the women's reaction to the news that they would make vestments for Pope Francis was mainly excitement. "They were very happy. Some said they didn't know that the pope's clothes were made by human beings."

"I feel so good," says Alice Wanjiru, a single mother of two boys who has worked for the sewing project for 13 years. "It is my first time and probably my last to make a garment for a pope. . . . and very few people get a chance like this. The pope is a big person to wear what has been made with my hands. I can already feel the blessings."

The women, assisted by eight men, are also making other vestments to be used in the Nov. 26 papal Mass, which will include 300 priests and 60 bishops.

"The chasubles for the bishops and priests are done and delivered to them already. We have also delivered 150 albs, and 2,000 stoles are ready," Lagonegro said.

She says the tailors have worked around the clock to make sure the vestments are ready early enough.

"We can now go back to our normal schedule because everything is almost done," said Lagonegro, who was born in Italy but has lived in Kenya since 1967. "These tailors have been working from 6 a.m. to 7 p.m. with a few minutes of lunch break."

The pope will wear the alb, one of the liturgical vestments of the Roman Catholic, Anglican, Lutheran and Methodist churches, when he arrives Nov. 25 in Kenya. The white regalia is decorated with IHS signs as a symbol of Pope Francis' origin as a Jesuit.

The classic chasuble made of a gold-laced material imported from Greece will be worn during the Nov. 26 papal Mass, which is expected to draw more than 1 million people at the University of Nairobi. According to Lagonegro, this is the most expensive of all the vestments.

Pope Francis will wear the chasuble with the Maasai designs on Nov. 27, his final day in Kenya. But the decision on what to wear at which function may be changed to suit the pope's preferences.

"The golden chasuble is what we have chosen for him to wear during the main Mass, but we leave it to him to select when he comes," Lagonegro said. "He might like the one with the African touch more for the Mass on [the] 26th. If he decides on that, then the golden chasuble will be worn on his last day in Kenya, the day he will visit St. Joseph the Worker." 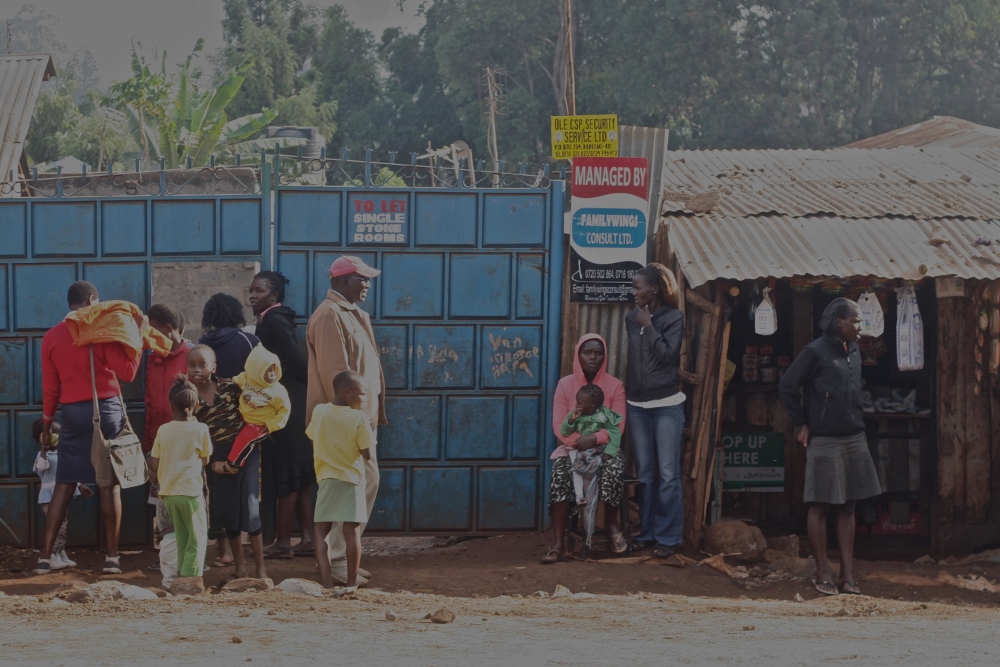 Kangemi's approximately 650,000 residents are preparing to accommodate 1,500 people from other poor neighborhoods across Kenya who will come to meet the pope.

"We can't wait for the day he jets in," says Millicent Nyambura, who was born and raised in Kangemi. "We are very excited that he has chosen to meet slum dwellers in Kenya and especially those living here in Kangemi. He will come with a message of peace, which we really need in the slums."

Preparations are underway, mostly on the main road leading to the parish where the pope will meet Kangemi residents.

"We know that the pope wants to see the reality on the ground. He wants to find us the way we live on a daily basis," says Catherine Wanjiru, a resident of Kangemi. "But you know what? When you have a visitor, you have to tidy up a little bit. He needs a passable road to access the slum."

Fr. Melchior Marandu, a priest at St. Joseph the Worker, describes Pope Francis' visit to Kangemi as a prophetic one. He says the pope is living up to his reputation of simplicity and love for the less-privileged in society.

"Since his election as pope, he has stood in solidarity with the poor," Marandu says. "He has helped them change their perception of life. They are looking forward to receiving him here. They feel loved."

He dismissed the notion that the pope chose to visit this particular parish because he is a Jesuit.

"The pope is coming here as a leader of the Catholic church and not for the Jesuits," Marandu says. "We feel blessed that he chose here, but we would have been equally happy if he had visited elsewhere."

Started in 1985, St. Joseph the Worker parish hosts 20,000 Catholics in 30 small Christian communities. The Jesuits of the Eastern Africa Province have run charity projects for almost 30 years in Kangemi, and the pope's visit is seen as recognition of this pastoral and charity work. 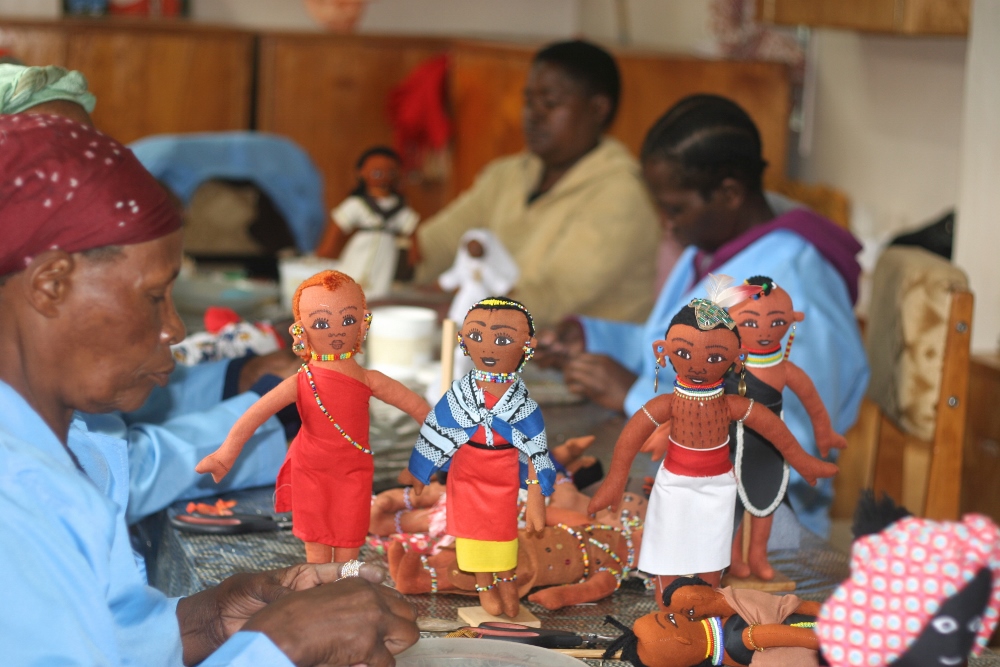 The pope is scheduled to meet 1,500 Kangemi residents for one hour inside the parish. But Marandu says given Pope Francis' flexibility in his foreign trips, he might decide to take a tour of the neighborhood.

During his six-day trip to Africa Nov. 25-30, Pope Francis is scheduled to visit Kenya, Uganda and the Central African Republic.

After he lands in Nairobi on the evening of Nov. 25, he will meet with President Uhuru Kenyatta at the state house. On Nov. 26, Pope Francis will hold an interdenominational meeting with religious leaders at the home of the apostolic nuncio before heading to the University of Nairobi for the papal Mass.

On Nov. 27, he will visit St. Joseph the Worker in Kangemi then meet with over 200,000 young people at Nairobi's Kasarani Stadium. That afternoon, he will fly to Uganda, where he is expected to visit the Anglican and Catholic martyrs' shrines in Namugongo. On Nov. 29, he will fly to the Central African Republic, where he is scheduled to visit a refugee camp.

The three countries have recently suffered serious security breakdowns, which have led to concerns about the pope's safety.

Kenya has suffered several attacks by Somalia's al-Shabab terror group. The April 2 massacre at Garissa University College, where 148 people, mostly students, were killed, is still fresh in the minds of many.

The Somali militants also carried out a major terror strike in Uganda in 2010. The country is currently in an election cycle, with reports of police crackdowns against opposition figures.

In the Central African Republic, a civil war pitting Christian anti-Balaka militias against mostly Muslim Seleka rebels erupted in 2012. Sporadic violence is regularly reported as the country prepares to hold elections in December. The polls had been scheduled for October but had to be pushed back because of escalating tensions.

Marandu has, however, played down any security concerns.

"We will not go by threats from terror groups," he said. "Personally, I'm very confident, and I don't think there will be any security loopholes. There is no chance for any danger to the pope."

[Lilian Muendo is a freelance journalist based in Nairobi, Kenya. She was a producer with the BBC from 2012 to 2014 and worked for Kenya Broadcasting Corporation from 2006 to 2012. She has a master's degree in media management from the University of Westminster in London.]