A set of mysterious petroglyphs lie at the heart of the indigenous Ngäbe-Buglé religion and written language — and those petroglyphs now lie at the bottom of a stagnant, foul-smelling reservoir.

The flooding caused by the Barro Blanco hydroelectric project nearly three years ago constitutes an ongoing violation of their religious and cultural rights, say Ngäbe-Buglé leaders, in addition to causing widespread damage to orchards, farmland and fishing that the communities depended on for food and livelihood. Sr. Edia "Tita" López of the Sisters of Mercy agrees.

López has accompanied this indigenous group in its struggle for more than a decade, since before the dam was built. She moved to the comarca, or Ngäbe-Buglé territory, in 2010 to join them in their struggle; she was there a year later when construction on the dam began. She was there, too, when thousands of Ngäbe dam opponents marched in the streets in a series of protests that culminated with protester deaths and lasting injuries. And she continued to support the communities in May of 2016, when the company began to fill the reservoir behind the dam, leading to flooding of the communities and weeks of significant and sometimes violent protests.

She watched with dismay as the Panamanian government pushed the dam project through, flooding Kiad and two other riverside communities, their cemetery and ceremonial site included, while causing springs to dry up and other environmental effects. Global Sisters Report chronicled the damage caused by the dam and the community's opposition to it in a series of articles in 2017.

Now, in the context of an investigation by an accountability mechanism of the United Nations Development Program, the affected communities are calling on the agency to help rectify the situation. "I have seen that the human rights of the population of the Ngäbe-Buglé people in this case have in no way been respected," said López in a recent interview. "For example, everything about the right to free, prior and informed consent has been totally violated by the project. I think they [Panamanian government authorities] never gave the correct or the complete and objective information to them in a way that people could understand what it was about, and the repercussions and the scope of the project. There was no intention to consult them, I think. How terrible, because the decision was already made."

López's words echo those found in the 40-page investigation of the Social and Environmental Compliance Unit (SECU), an accountability mechanism established to monitor the activities of the United Nations Development Program. While the UNDP was not a direct investor in the dam itself, it did coordinate a series of dialogues aimed at finding a resolution to what was already by then a decade-long battle against the dam.

SECU found that the development agency's participation in the roundtable dialogs, and particularly, in the technical roundtables that followed was problematic in several regards. The team spent a year combing through public records and media reports (including GSR's) and interviewing all involved parties, releasing their findings in August 2018. UNDP's participation was particularly problematic, the report stated, given "red flags" raised on two previous occasions by other U.N. investigations.

A UNDP technical investigation in 2013 revealed major flaws in the environmental impact study. A second study by James Anaya, then the U.N. Special Rapporteur on Indigenous Issues, warned of irregularities in the process and a failure to properly consult with the Ngäbe people. Anaya warned that "the lands of the Ngäbe people should not be flooded or adversely affected in any way without the prior agreement of the representative authorities of that people." The "representative authorities" means the Ngäbe-Buglé congress, which to this day has not approved the dam.

The agency did not follow its own protocols in ways that were also problematic, according to the report. Among other issues, the UNDP's Panamanian representative did not meet UNDP requirements to apply the agency's environmental and social screening procedures. Use of those procedures would likely have revealed the probability of "adverse impacts on enjoyment of human rights;" risk of violence; and "impacts to indigenous culture, i.e., it was clear the dialogue could lead to an agreement that would adversely impact the petroglyphs and other forms of affected community culture."

UNDP Administrator Achim Steiner released his decision regarding the project on Feb. 4, calling the SECU investigation a "rich source of information and learning about a number of interventions in this project and how, in view of the lessons learned, we might approach similar interventions in the future."

It did not, however, mention interventions to rectify the situation plaguing the residents of Kiad who, in addition to losing their ceremonial site, have lost their principal water source and their livelihood. Fruit orchards, coffee and cacao plantations and their herbal pharmacopeia were also flooded. In addition, the hydroelectric dam company drained the river last year during maintenance, causing a massive fish kill, and now the communities' main protein source has been virtually eliminated.

The impacts to the community are felt not only by those who live there, but by the Ngäbe-Buglé nation at large. Ancestral cemeteries now under water and the dams "have permanently affected the set of sacred petroglyphs where the communities of the entire region gathered annually to pay tribute to the Cacique Tabasará, as well as a place of healing," wrote Goejet Miranda, president of the M10 movement representing the affected communities, in the group's letter to Steiner on Jan. 9, as they awaited his response to the SECU report. (M10 refers to April 10, "Movimiento 10 de Abril.")

Miranda was referring to the mythical warrior-leader revered in their traditions, whose name is still carried by what is left of their Tabasará River. "This reservoir is depriving [the Ngäbe-Buglé people] of the exercise of their religious ceremonial worldview in a very important way, not only for the affected communities but for the entire Ngäbe Buglé nation," the letter went on to say.

"There is freedom of worship in this nation and the company through its reservoir has violated this right, as well as the government that has allowed it, have violated the law and damaged the sacred petroglyphs, apart from making them inaccessible through its reservoir and tons of sediment that cover it. This in itself constitutes an unforgivable violation of Human Rights, as well as an ethnocide where a culture is killed, its sacred places are destroyed along with their religious culture." (The residents had not received a response as of Feb. 13.)

About 100 people attended this year's annual ceremony honoring Cacique Tabasará — a fraction of the numbers who used to come from all over the Ngäbe territories for the celebration — and the three-day proceedings were beset with hardships due to the lack of water, said Weni Bagama, Kiad resident, M10 leader and one of the event organizers.

"It has become extremely difficult to organize events now due to the fact that our spring is drying up, and we no longer have our river," said Bagama, who continues to travel to Panama City to knock on doors and pursue legal options to support their struggle.

In December, she traveled with two other indigenous activists to Washington, D.C., seeking out the offices of the Inter-American Commission on Human Rights to follow up on a hearing two years ago and a precautionary measure that have yet to bear results. She located her community's file in the building's vast maze of offices, as well as a person familiar with the process, who advised her on the next steps to reactivate that case.

With regard to the specific concern about religious freedom, López cited Article 11 of the U.N. Declaration on the Rights of Indigenous Peoples (UNDRIP), which states that they "have the right to practice and revitalize their cultural traditions and customs." The declaration adds that "States shall provide redress through effective mechanisms, which may include restitution, developed in conjunction with indigenous peoples, with respect to their cultural, intellectual, religious and spiritual property taken without their free, prior and informed consent or in violation of their laws, traditions and customs."

López, who is Panamanian, reflected upon the role of religion and culture in indigenous communities forming the collective memory of a people. "Religious expressions are only one of their rights as an indigenous people, but that allows them to live in the middle of the political struggle for their natural assets," she said. "Subjected to the political — in the specific case of Barro Blanco, an economic power that subjects and excludes them — our people resist, thanks to their cultural, religious specificity."

Indeed, she added, religion and culture have become the foundation of indigenous struggles to maintain their territories and ways of life. "Those struggles that are in fact cultural and religious struggles, and at the same time expressions of the vitality of their cultures," said López, and "are what allows them to survive this system that excludes and marginalizes them." 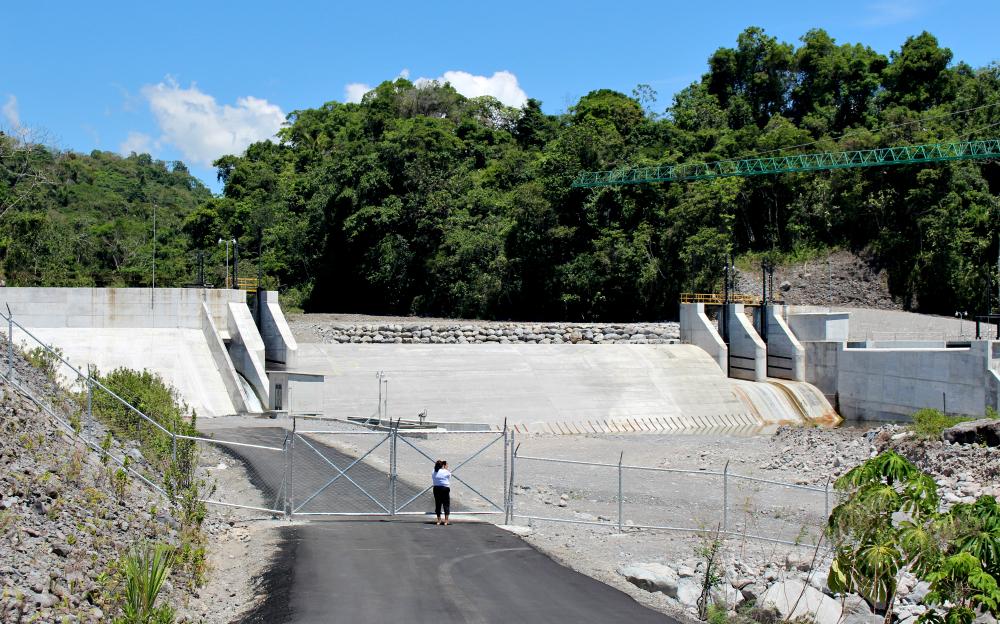 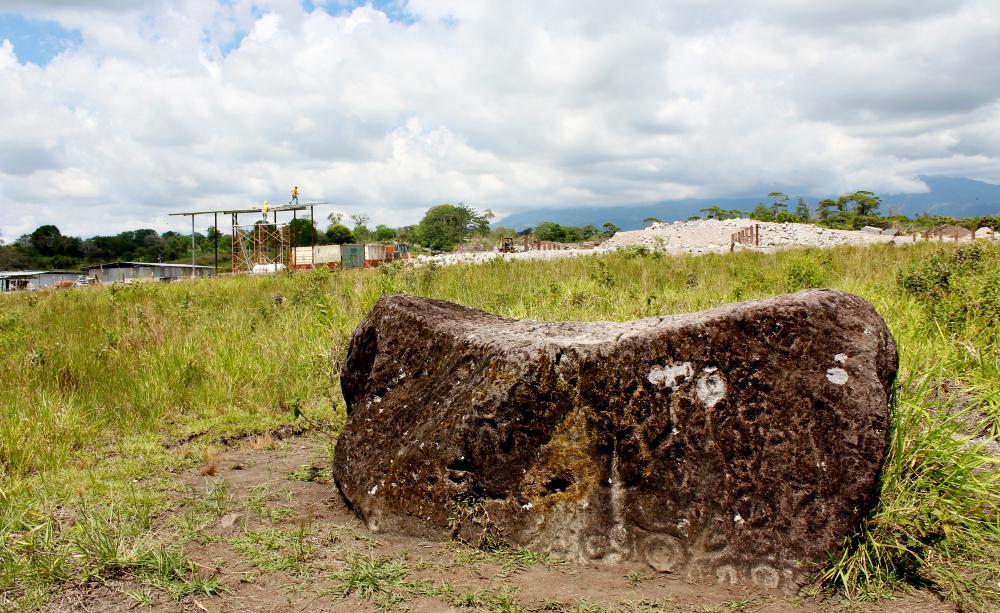 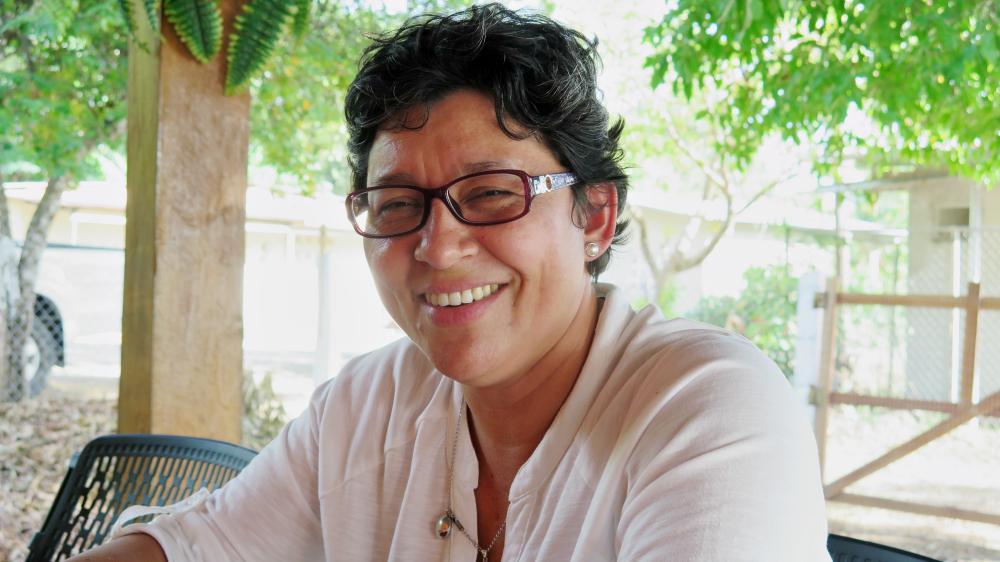 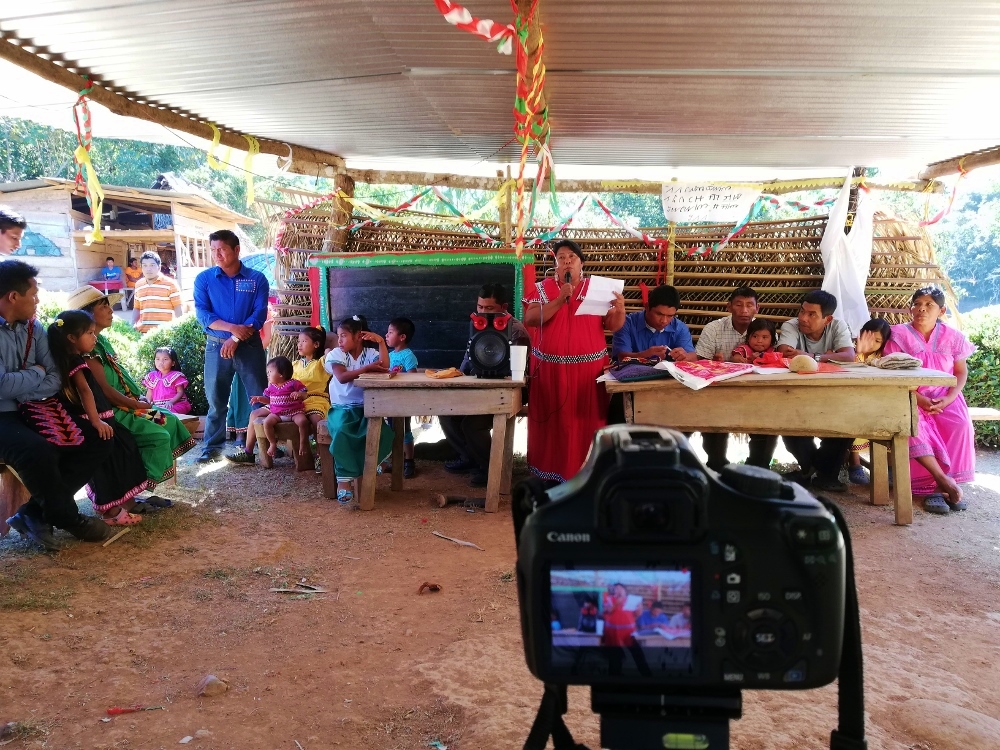 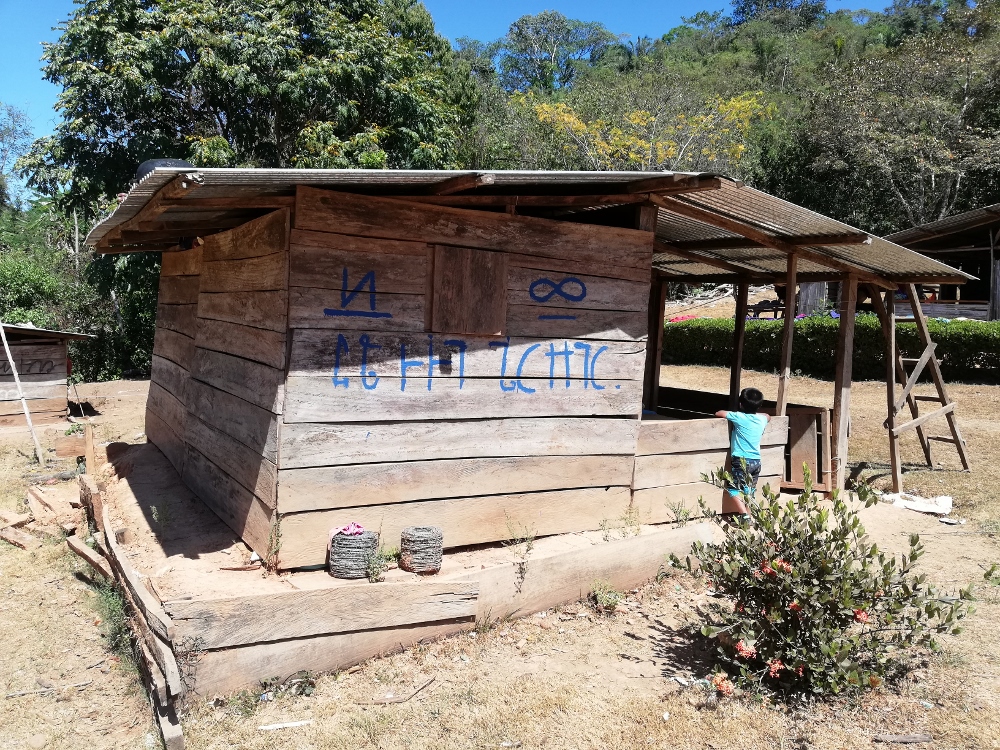 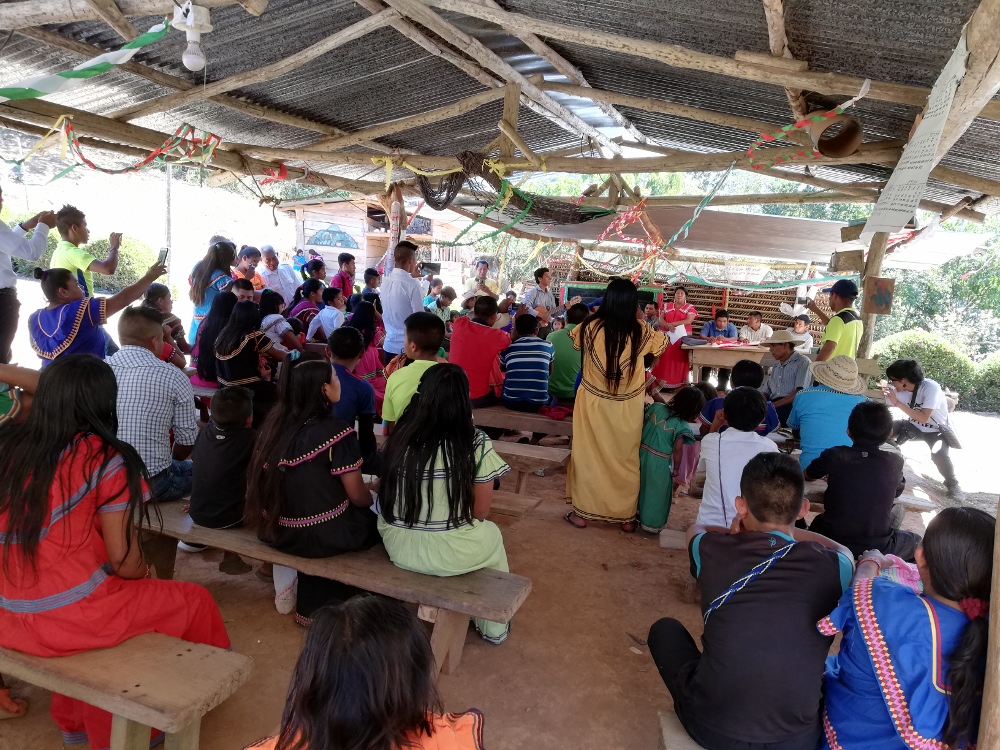 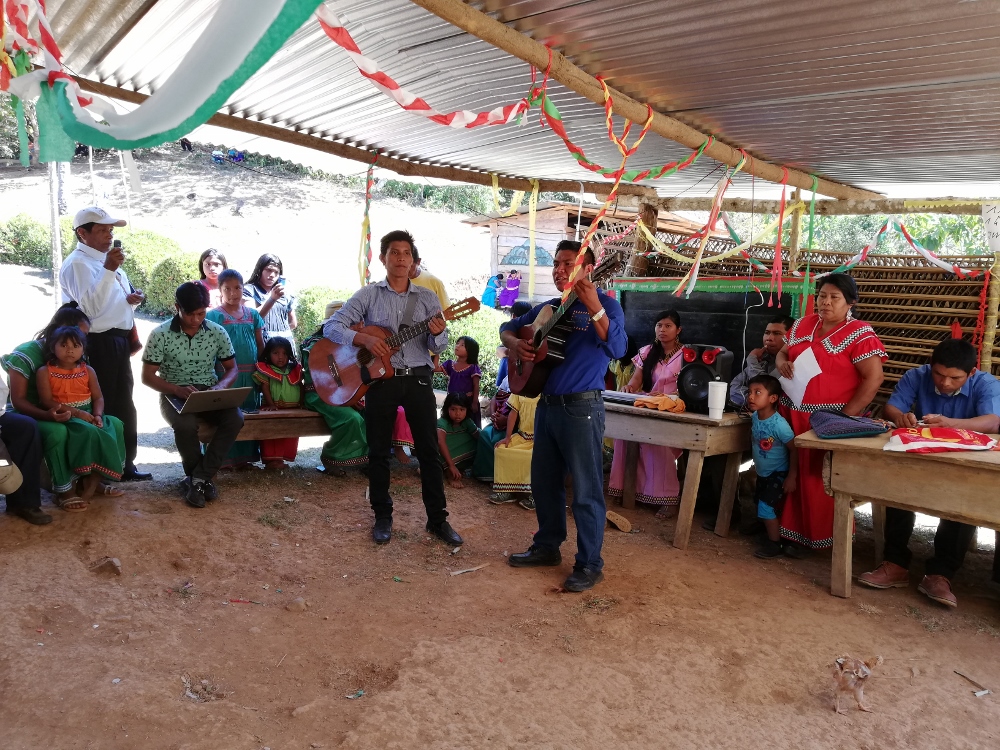