• A wall in their river: Flooded Ngäbe communities continue to fight dam 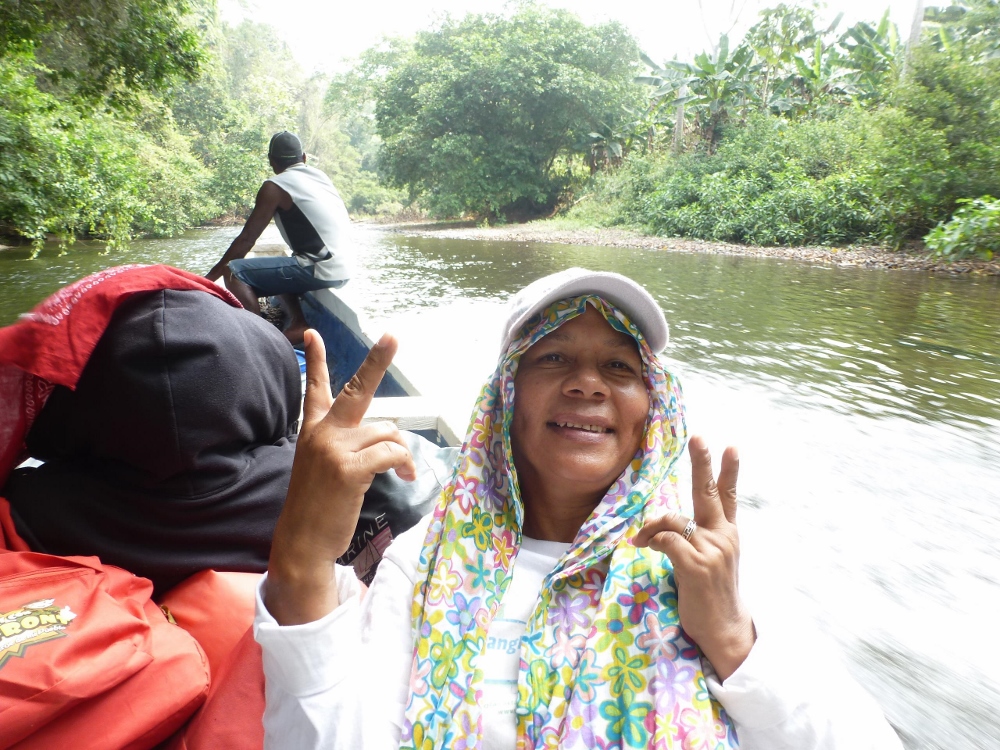 Journalist Ligia Arreaga in the wetlands of Matusaragatí. Arreaga had to flee the country last year after her life was threatened for her reporting and activism about the destruction of the wetlands. (Courtesy of Ligia Arreaga)

Panama City, Panama — The waters were rising in Weni Bagama's community when she headed to Panama City to meet with government officials about the flooding from the Barro Blanco hydroelectric dam. Maryknoll Sr. Melinda Roper left from the opposite end of Panama, the province of Darien, heading to the same destination: the first in a series of meetings on the problem of human rights violations against environmental defenders throughout the country.

Roper and Bagama were two of 10 people scheduled to speak April 4; the meeting was requested by the Inter-American Commission on Human Rights at a hearing last month in Washington, D.C. The Sisters of Mercy Institute Justice Team and the Maryknoll Office for Global Concerns were among the groups that had requested the hearing.

"My impression was that the atmosphere was one of clarity and openness on the part of almost all the people there to continue the process of dialog, creating a space perhaps every month for conversation to continue — realizing that there are many, many problems in Panama in terms of human rights violations, especially in relation to environmental problems," said Roper.

There are more than 90 recorded human rights cases related to environmental issues, according to the Ministry of the Environment. "Of course it's the type of meeting where you can make recommendations and you can establish context and dialog. It's not a problem-solving meeting in the sense they would make a resolution to solve a specific problem, but I think it could work toward that."

Roper, whose wide-ranging work in Panama includes participation in a local environmental group called Alianza para un Mejor Darien (Alliance for a Better Darien), was there to speak about the government's lack of response to the repeated death threats to journalist Ligia Arreaga, who was forced to flee the country due to her reporting on the destruction of the wetlands of Matusaragatí.

Although the government has set aside 26,000 hectares of the approximately 68,000-hectare wetlands as protected areas — the country's most important — a series of irregularities continue to plague the region, including massive land grabs by growers of industrial rice and oil palm.

Illegal canals have been built that are draining the wetlands, and the lagoon at its heart is beginning to run dry; 6,000 hectares belonging to the reserve have illegally been sold to private individuals, according to an ongoing lawsuit by the environmental ministry.

Roper considered the strong representation at the meeting by high officials from many government agencies, as well as the U.N.'s high commissioner on human rights, to be a good sign.

Bagama wasn't so reassured. Regarding the Barro Blanco dam, Bagama, a leader of her native Ngäbe people and the resistance movement that has battled for nearly two decades to stop that dam, had traveled to Washington, D.C., for the IACHR hearing on March 17. At that hearing, she had taken some heart in the fact that the international commission requested the Panamanian government engage in dialogue with protesters. She attended the follow-up meeting April 4 with high hopes. 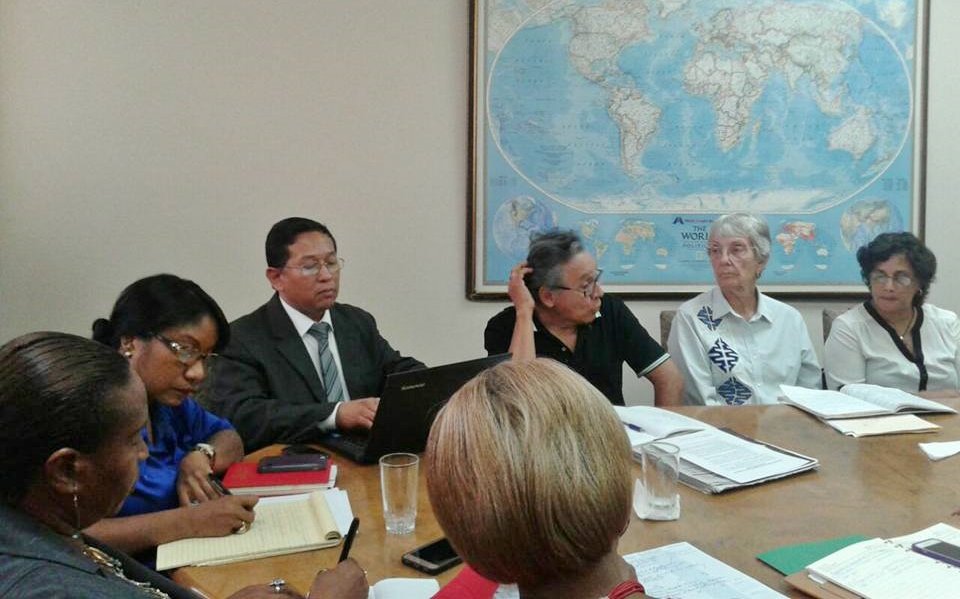 Sr. Melinda Roper, second from right, attended the meeting with government officials on behalf of Alianza para un Mejor Darien on April 3, where she spoke of the case of journalist Ligia Arreaga and the destruction of the Matusaragatí wetlands. Osvaldo Jordán, executive director of Alianza para Conservation y Desarrollo, is pictured fourth from the right. (Courtesy of Feliciano Santos)

Afterwards, though, she expressed frustration at the lack of a response of government officials to her pointed questions. Earlier, on March 27, government officials, including Vice Minister Salvador Sánchez, had traveled to her community of Kiad to begin talks with the three affected communities.

They met, but talks seem to have already reached a stalemate, as residents wanted two conditions in order to move forward. First, the reservoir levels need to be lowered below the line of the autonomous territory (comarca) to allow a professional archaeological investigation of the petrogylphs that have been submerged. The petroglyphs are their most important ceremonial site and represent a connection to their ancestors.

Second, they are repeating their request for representatives of the Dutch and German development banks that financed the project to visit the Ngäbe communities affected by the reservoir. Bagama said she hopes that the investment banks' presence will contribute to a workable solution. But by March 31, with no warning, the waters in the river again began to rise.

At the April 4 meeting, "I asked them, 'How we can have a guarantee that this conversation, this approach, will have follow-through and respect when they have not even concretized anything and are filling the reservoir again?"

Bagama was told that the subject of Barro Blanco would be dealt with in a separate process. She asked when the next meeting would take place and has not yet received an answer.

Mónica De León, director of communications for the government's Office of the Chancellor, sent an institutional response to GSR's questions via email: "The Government of the Republic of Panama is holding talks with the representatives of the communities impacted by the Barro Blanco Hydroelectric Project, in order to promote actions that address the incompatibilities identified at the dialogue table."

She referenced the March 27 meeting in Kiad "to agree on options for spaces and points of cultural veneration of communities impacted by the project and follow up on monitoring of water quality studies. It should be noted that the hydro has not entered operations, the test period is nearing completion and water remains at the lowest level."

During the months-long "test period" for filling the reservoir, the community lost its generations-old food forest and most of the fish and shrimp in their river, the ancient petroglyphs that are an important ceremonial site, their roads to other communities, and several homes. In recent months the waters have dropped due to it being the dry season; the rainy season has not yet begun, so the rising waters have come as a surprise. 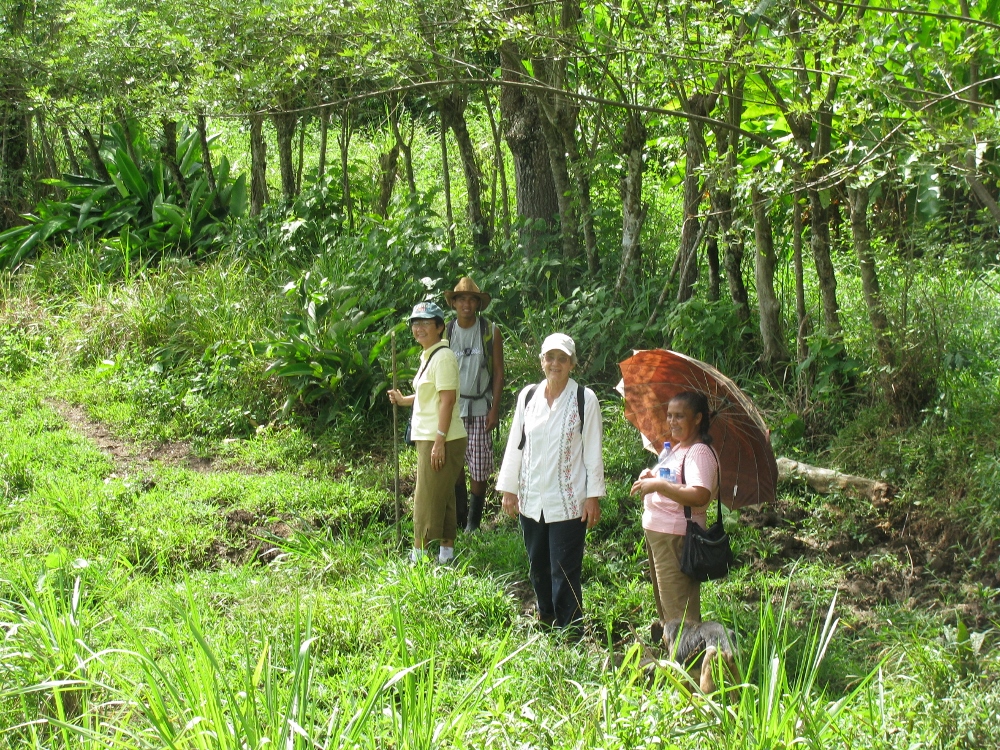 There was no answer from the government regarding the request for a visit from the banks. Meanwhile, Paul Hartogsveld, Dutch Development Bank FMO press officer, wrote to GSR: "FMO continues to emphasize the need for dialogue and consent between all parties involved. We respect the process and are awaiting the outcome. We do not foresee further action as this would possibly interfere with the negotiations between the government and the indigenous representation."

Another case presented at the April 4 meeting that continues to deteriorate, said Osvaldo Jordán, executive director of the Panamanian nonprofit Alianza para Conservación y Desarrollo (Alliance for Conservation and Development), is the development of Pedro González Island, where residents of African descent say law enforcement has arbitrarily detained them for opposing a foreign investor's tourism project on lands they and their ancestors have inhabited for 300 years.

Despite the disappointment that Barro Blanco wasn't addressed, attendees agreed that the meeting was a positive beginning to a new forum for addressing human rights violations against environmental defenders.

"I think it was positive in the sense that it allowed for a dialog," said Jordán. "These are groups that were heavily oppressed, and their cases were ignored. So just making those cases visible and raising them to this level of public awareness is a step ahead. Unfortunately no clear answers were given and the danger is that this becomes catharsis — just a time for people to vent their frustrations without getting to any resolution. So we have to fight hard for that not to happen."

Farah Urrutia, Director of the Ministry of Foreign Affairs, responded to GSR's questions in an email, referencing the achievements of the meeting: the presence of high-level officials in various government agencies, as well as the Office of the Ombudsman, and an agreement to follow up with site visits to the problem areas and by organizing monthly meetings with environmental defenders.

"Finally, we believe that the climate of the [working group] is conducive to assess the possible presentation of a bill that can protect these groups," she added.

Jordán agreed. "I think the meeting represented a positive direction, in particular the proposal of the ombudsman's office to coordinate with the U.N. in trying to get a policy that will protect environmental defenders in Panama," he said.

Meanwhile, Bagama is hopeful of receiving a phone call soon so that the conversations with the government can continue. Although she clarified — as she did at the April 4 meeting — that in her view, as of yet there is no formal dialog between the communities and the government, and there will be no dialog until their requests are met.

"If the government wants a conversation with the affected communities, they need to stop filling the reservoir," she said. "If they do not stop the filling it, there is no conversation. It is regrettable and I don't want it to happen, but that is what will happen if the government does not order to stop filling. They argue that they cannot do it, but I ask, 'Who is in charge? The government or the companies? Who defends the rights?' That is what we are seeing."

Web of Life: closing the circle

Checking in on sisters around the world: COVID-19 has constrained ministries