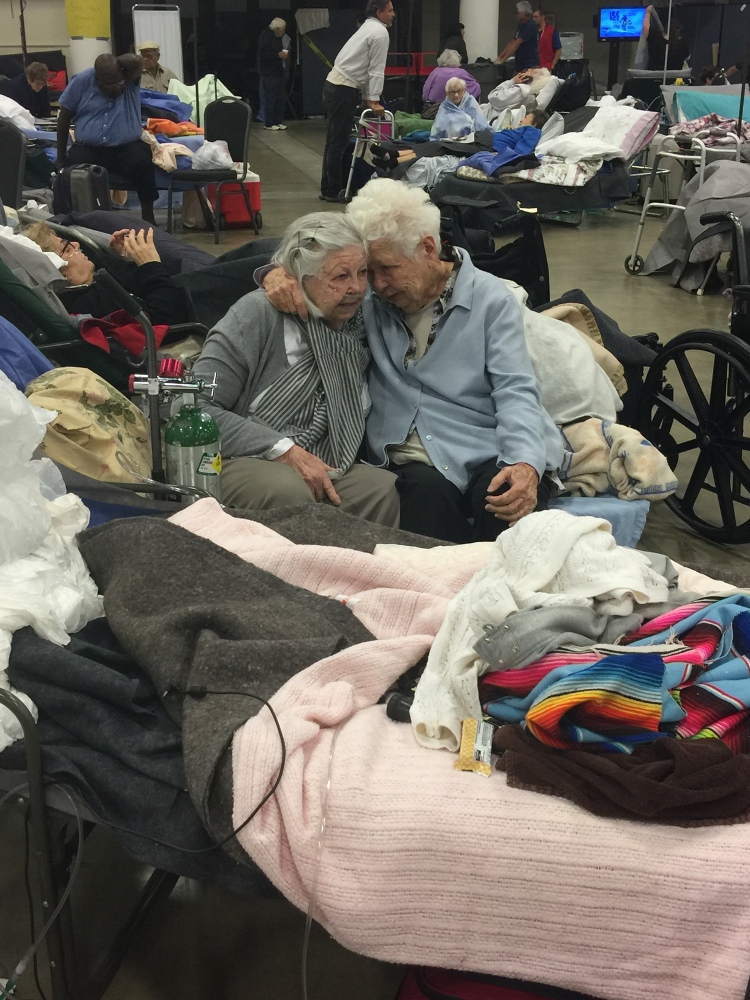 For the Adrian Dominicans in West Palm Beach, Florida, waiting was the worst part of Hurricane Irma, especially those hours between when the preparations finish as the first winds arrive and when the full fury of the storm begins. Days of frantic prep-work come to a halt, and all you can do is wait, wonder and pray.

"The most excruciating part is the waiting and anticipation for the storm to arrive. It is waiting for the unknown and the uncontrollable," Sr. Judy Rimbey, who compiled the sisters' activities leading up to the hurricane, wrote to Global Sisters Report in an email. "Clearly, God and the forces of nature are in control."

The sisters spent the three days before Hurricane Irma was expected to make landfall storing every outside item that could be taken up by the wind, not just to avoid losing things but to keep them from becoming projectiles against someone else's home. Outdoor chairs, grills, plants, recycling bins — all had to be brought inside. Shutters had to be attached to every window and glass door, and they had to be closed before the storm hit, Rimbey wrote.

The preparations for sustaining the community during and after the storm begin every year on June 1, the start of hurricane season, when the sisters stock up on water, nonperishable food and batteries. After that, all they can do is hope and pray they won't be needed, or, if they are needed, that there will be enough for the five sisters at the residence they call Casa de Maria.

By the time the preparations for Irma were done and the wind began to rise, more than 6.5 million people in Florida had been ordered to evacuate, and another 540,000 were told to evacuate from the coast of Georgia. Alabama, Florida, Georgia, North Carolina and South Carolina had all declared states of emergency.

"After all the physical preparations, our work now was to pray," Rimbey wrote. "We have a chapel at Casa de Maria, and we were there many times during the storm."

'I knew that I had to leave'

Meanwhile, Sr. Pat Erickson was with another group of Adrian Dominicans on the other side of town, waiting and worrying about what was happening in Key West, which the morning of Sept. 10 bore the full brunt of the Category 4 hurricane as the storm came ashore at Cudjoe Key, 20 miles east.

Erickson lives in an old mobile home in Key West. If she had stayed there, she would have had to take shelter somewhere else or ride it out in the bathroom.

Instead, she and four other Adrian Dominicans were in West Palm Beach, glued to the television.

"The unpredictability of the storm caused much anxiety and worry, since we have sisters, family and friends all along the Florida coast and inland," Erickson wrote in an email to GSR. "I am so grateful to be with our sisters. I can't imagine what it would feel like to be alone."

When she first heard a hurricane was coming, Erickson planned to stay put, knowing she could take shelter in the parish center, a secure, concrete building. Not only did she want to stay home, but she wanted to avoid the drive to the mainland — a 125 miles on a two-lane highway that is mostly bridges with ocean on each side. After that is another 100 miles to West Palm Beach. 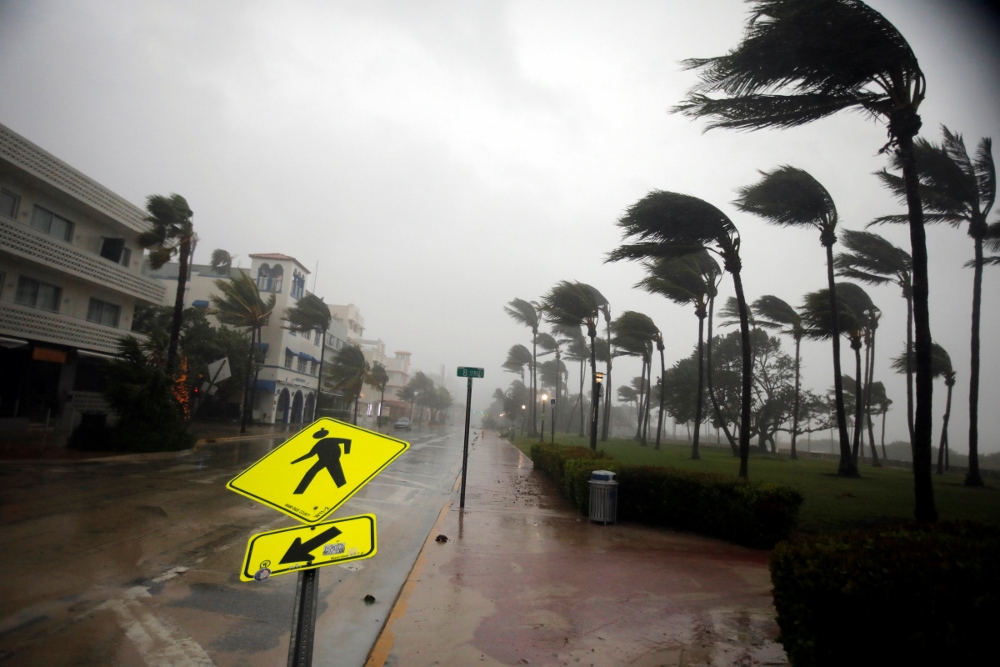 "It is a challenge even in good weather," she wrote. "I did not want to make that trip."

But the storm kept getting stronger, and the images of the storm surge and flooding from Hurricane Harvey were fresh. So when news came that Irma had become a Category 4 hurricane — a major storm whose sustained winds of up to 156 mph can cause catastrophic damage — and it still had 1,000 miles of ocean to gather strength on, evacuation became the only sensible choice.

On Sept. 4, Erickson booked a flight to South Carolina for Sept. 8, two days before the storm was due to make landfall, to stay with her brother. She also received invitations from the Dominican sisters in West Palm Beach and Miami.

The next day, officials announced the Key West airport would close Sept. 6, and all flights after that were canceled. Every flight before that was already overbooked.

"I didn't know what to do," Erickson wrote. "After I cried awhile, I decided that I had no choice. I knew that I had to leave, and driving was the only recourse."

She accepted the invitation from the sisters in West Palm Beach, packed her clothes and personal papers, unplugged cords, raised things off the floor, and started.

"I cried when I left my home and asked it to be safe," Erickson wrote, "and said I'd be back."

The drive from Key West to mainland Florida was uneventful.

"The traffic on the turnpike was another story … all lanes bumper-to-bumper, creeping along, people trying to get somewhere north of the storm," she wrote. "Thanks be to God I did not need gas nor did I have to use the 'facilities.' The lines to get into the Service Plazas along the turnpike were at least a mile long."

Despite the traffic, the trip only took an hour longer than usual, but her plans to fill up the car were sunk when she found the gas stations in West Palm Beach either had really long lines — or no gas left at all.

'We seemed to become a family'

At Casa de Maria, Sr. Mary Therese Napolitan was marveling at Floridians' willingness to help each other. When Gov. Rick Scott said 70,000 volunteers were needed, it took just hours to meet the goal. He asked once for 2,000 nurses to respond to the call for help and never had to ask again, Napolitan said.

"It seems that people were very willing to go to shelters and help out," she told Global Sisters Report.

Some, however, had no choice about whether to go to a shelter. Sr. Grace Flowers is on oxygen, so when the news came Sept. 7 that West Palm Beach was in the path of the hurricane, she prepared to go to the Palm Beach County Special Needs Center she had pre-registered for.

The shelter was divided into pods according to medical needs, Flowers wrote. It was planned for about 600 people, though many brought a caregiver, bringing the population to about 900. With the volunteers from AmeriCorps, medical staff and security, the shelter was home to about 1,200 for three days.

Despite the crowd and the stress of the storm, "I heard no griping or complaining," Flowers wrote. "Everyone was most gracious and kind to one another. … As more and more people began arriving, we seemed to become a family, with folks sharing snacks, showing telephone pictures of their pets and families." 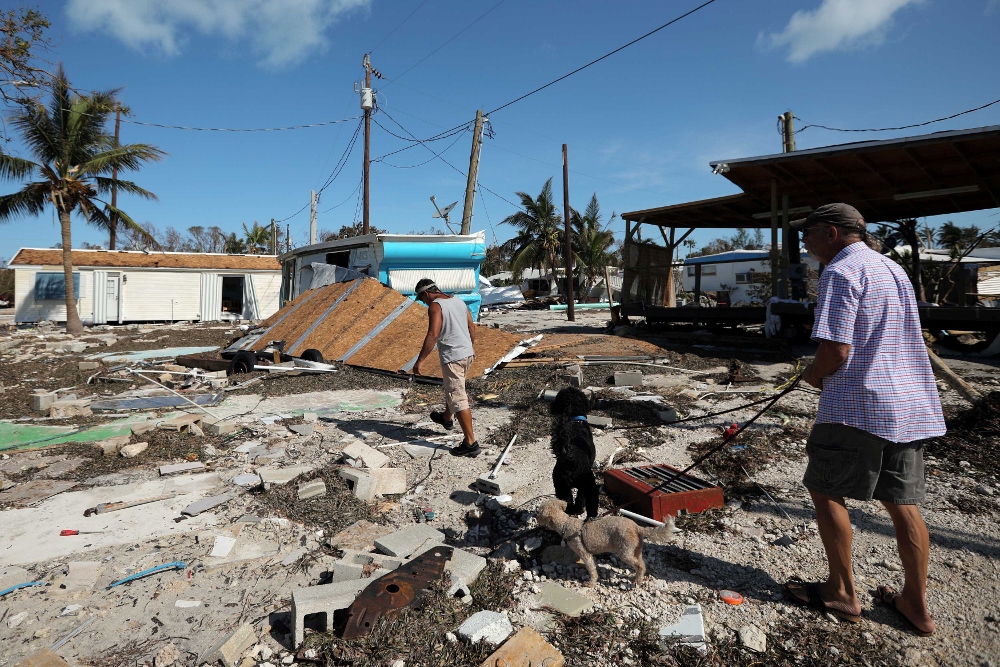 Men walk in a destroyed mobile home park Sept. 12 in the aftermath of Hurricane Irma in the Florida Keys. (CNS / Reuters / Carlos Barria)

A different form of church

Sr. Margaret Exworthy and the other Dominicans had been praying that the storm, forecast to travel up the east coast of the state, would veer even further east and break up, sparing the state any damage. Instead, it traveled up the west coast of Florida, making landfall at Marco Island.

But Florida is only 160 miles across at its widest point, and Hurricane Irma at times was 400 miles wide. The eastern coast avoided the direct hit, but it was still subject to hurricane-force winds and massive amounts of rain and storm surge brought from the ocean by the storm's counter-clockwise spin.

Starting on the morning of Sept. 10, the winds began to increase, and there were repeated tornado watches and warnings, Rimbey said, as twisters formed over the ocean then moved inland. By late afternoon, the winds reached hurricane force: sustained winds of more than 74 mph. Eventually, they would reach 91 mph, she said.

Across town, Erickson could see the storm's wrath.

"The strength of the winds was frightening," she wrote. "At one point we watched a palm tree in the backyard be torn from the ground while falling."

In the special-needs shelter, a nurse approached Flowers, whom she knew was a Catholic sister, and asked if Flowers could help a distraught woman. She was upset that she could not watch a televised Mass, which combined with the stress of the storm was affecting her breathing.

Flowers sat with the woman, holding her hands, and told her that church was much more than the Mass.

"I told her that church is not only a building for worship, but church is also the people of God. That we here gathered were church," Flowers wrote. "That for two days we had broken bread together through our shared meals. That we gave a type of Eucharist to one another by helping each other, sharing our stories and speaking kindly to one another."

The woman calmed, and stayed calm through the rest of the storm. 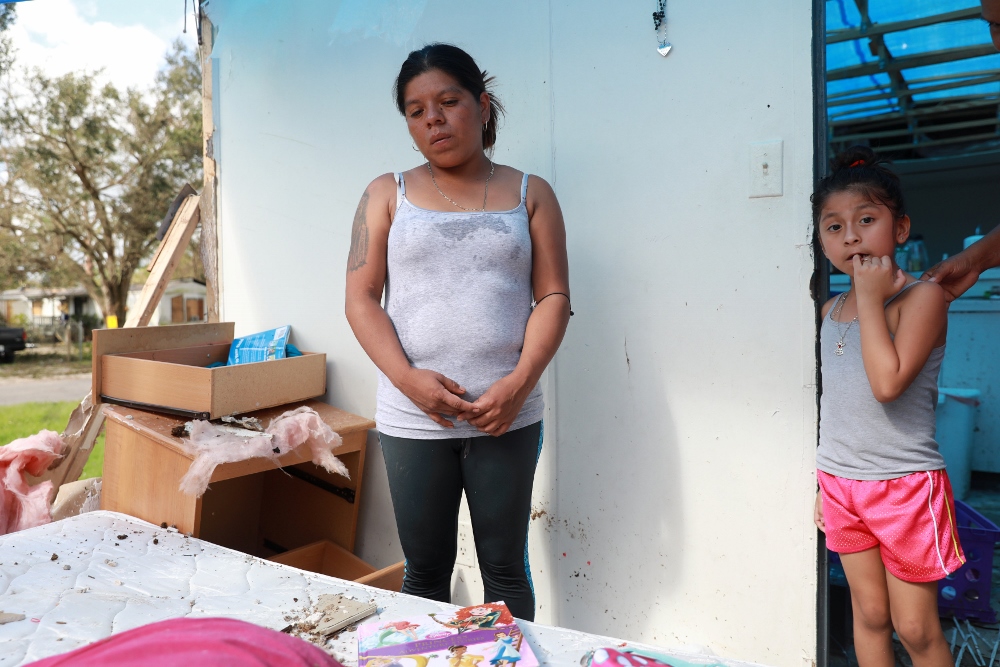 Sandra Guzman and her daughter, Maria Valentine Romero, Sept. 12 in their mobile home, which now has a tarp instead of a roof after the passing of Hurricane Irma in Immokalee, Florida. (CNS / Reuters / Stephen Yang) 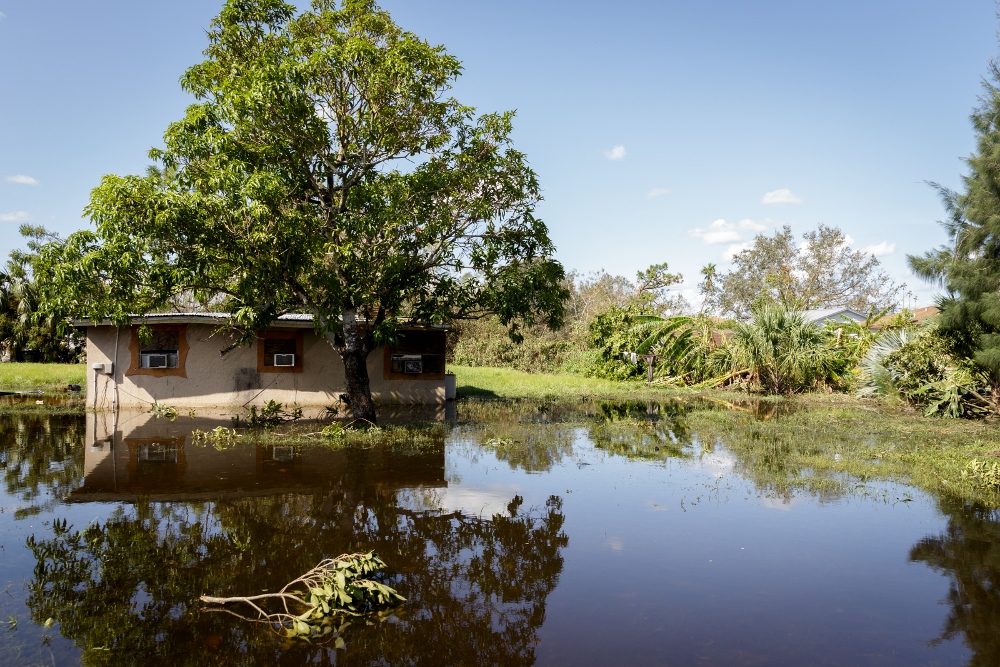 Finally, close to midnight Sept. 10, the winds died down. Though the power had gone out where Erickson was staying, it remained on at Casa de Maria. And despite the roaring wind and rain, there was almost no damage.

"It was remarkable," Napolitan said. "When we went outside, you hardly knew there had been any wind blowing."

"I was just praying to God that the roof would stay on our buildings, that we wouldn't get a big hole in our roof and all the rain come in," Clemenger said. "But we had no structural damage, except some water came in at a door on the east side where the wind and rain were banging against it."

Now, the sisters await word on what they can do to help recovery efforts, knowing it is best to wait until officials say what is needed.

As of Sept. 12, Erickson was still waiting to hear whether she can return home to Key West — and whether she has a home to return to.

"There is no answer at the mobile home office where I live," Erickson wrote. "The friends that I would call are all somewhere else in Florida."

And even if she could go home, she wouldn't get far: Most of the gas stations in the area are closed because they are still out of gas, were damaged in the storm, or have no electricity to run the pumps.

By Sept. 13, the official death toll from the hurricane had risen to 30 across three states, including eight who died in a nursing home in Hollywood, Florida, after days of no air conditioning. Federal Emergency Management Agency officials said up to 90 percent of homes in the Florida Keys had been damaged, but local officials said the number was much lower, ABC News reported. Millions remained without electricity. 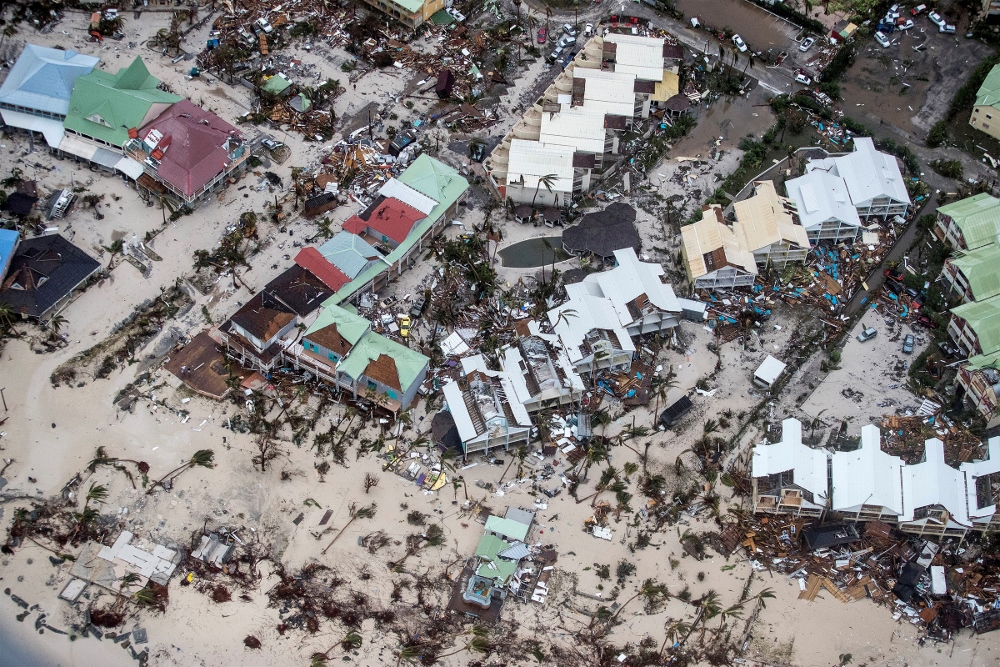 But the damage was far less than Hurricane Irma caused in the Caribbean, where the island of Barbuda took a direct hit and suffered extraordinary damage. Dozens of people were killed across the Caribbean, with officials estimating there was $1.4 billion in damage to the island of St. Martin alone, the New York Times reported.

Napolitan said the sisters were blessed beyond measure.

"The house that we live in here is Casa de Maria, the House of Mary," she said. "And I am a firm believer that this is a very safe place and that our Blessed Mother watches over this house."

Fracking should be an issue for everyone, Mercy sister says in fracking webinar