On its 70th anniversary today, the Universal Declaration of Human Rights is being celebrated as a milestone in the history of human rights and the quest for human dignity.

But human rights defenders and advocates, including Catholic sisters who represent their congregations at the United Nations, say the commitment to uphold the rights enshrined in the document is under threat.

"We still have so far to go," Sr. Janet Kinney, a member of the Sisters of St. Joseph of Brentwood, New York, and the executive director of the Partnership for Global Justice, a U.N.-based advocacy organization.

"Human rights violations are widespread across the globe," Kinney told GSR. "Faced with the reality of the Rohingya refugees in Bangladesh, the plight of the people of Syria, the Israeli and Palestinian conflict, migrants being turned away from our American borders, the proliferation of nuclear weapons, the victims of human trafficking, the pilfering of our Earth of its natural resources — it can be overwhelming."

The situation has become so worrisome that Sr. Teresa Kotturan, U.N. representative for the Sisters of Charity Federation, said the 1948 declaration would have real trouble being approved today, given the rise of pro-nationalist politics throughout the world.

"If they were negotiating the declaration, it wouldn't pass. Governments are looking for loopholes in human rights law or have outright disdain for them," she told GSR in an interview. "It's everywhere. [Governments] do lip service to human rights and act with impunity … arbitrary decisions are made issue to issue."

She said rightward, nationalist movements are resulting in governments "having less respect for individual rights and less concern about what the rest of the world feels" or how it views a country's human rights record.

Formally approved by the United Nations General Assembly in Paris on Dec. 10, 1948, as a declaration of principles, the resolution was hailed in the wake of the horrors of World War II as a real triumph, "a common standard of achievements for all peoples and all nations," establishing "for the first time, fundamental human rights to be universally protected," as the U.N. described it.

The document is "generally agreed to be the foundation of international human rights law," the U.N. said, noting the declaration "has inspired a rich body of legally binding international human rights treaties" and also serves as the basis for subsequent declarations and compacts on refugees, migration and indigenous rights. Indeed, on this anniversary begins a two-day meeting in Morocco by representatives from governments around the world to discuss and adopt the Global Compact for Safe, Orderly and Regular Migration, a framework on how to respond to migration and migrants.

The declaration's first article is its cornerstone: "All human beings are born free and equal in dignity and rights. They are endowed with reason and conscience and should act towards one another in a spirit of brotherhood."

In the following articles — there are 30 in all — the declaration affirms individual rights, such as not being held as a slave (Article 4), or subjected to torture (Article 5); to be recognized "as a person before the law" (Article 6); and not to be "subjected to arbitrary arrest, detention or exile" (Article 9).

The concept "of human rights, set out in the Universal Declaration, has had a revolutionary impact," U.N. Secretary-General António Guterres said at a Sept. 26 event commemorating the anniversary, held during this year's meetings of the U.N. General Assembly. "It has permeated policies and constitutions, from the global level to national and regional frameworks."

The declaration is also a foundation for much of the advocacy work that religious congregations working at the United Nations do.

"We, religious sisters at the United Nations and our congregations, sustained by the church's social teachings, continue to move forward, to work toward curbing injustice and to hold those in power accountable," Kinney said.

"The Universal Declaration of Human Rights is a document worth celebrating, because it holds our global world to a higher standard," she said. "And as people of faith we are called to be its bearers of hope, to do what we can, and to help bring its ideals to fruition."

But holding governments to higher standards is not easy. Sharing the platform with Guterres at the Sept. 26 event, Michelle Bachelet, the U.N. high commissioner for human rights and the former president of Chile, warned that progress made in the last 70 years is facing obstacles.

"In many countries, the fundamental recognition that all human beings are equal and have inherent rights, is under attack," she said. "And the institutions set up by states to achieve common solutions are being undermined."

One sign of how human rights are being minimized was the decision announced by the United States in June to withdraw from participation in the Geneva-based United Nations Human Rights Council, citing U.N. criticisms against Israel's treatment of Palestinians. President Donald Trump has also praised leaders of countries criticized for their human rights records, such as North Korea, Russia and the Philippines.

While not citing political trends or specific governments, Guterres, a Portuguese diplomat, said the anniversary is calling into question a host of concerns, particularly about the still-slow progress of human rights for women and others.

"Sadly, we still have a long way to go before respect for human rights is truly universal," he said. Refugees and migrants, people who do not conform to gender norms, and minorities of all kinds are frequently targeted for denial and abuse of their rights."

The U.N. chief noted that there is "still resistance to supporting human rights, often linked to a false dichotomy between those rights and national sovereignty. But human rights and sovereignty must go hand in hand."

Human rights, he argued, actually "strengthen states and societies and reinforce sovereignty. We have ample evidence that state-sponsored human rights abuses are a sign of weakness, not strength. They are often precursors to conflict and even to collapse."

Sr. Sheila Smith, the United Nations representative for the Society of the Sacred Heart, notes the declaration is a secular-based ethical framework that "can speak to other frameworks, like religious ones. We can talk with it. We share the same values."

While still "extremely relevant" in the world today, the 1948 document has shortfalls, Smith told GSR in an interview. The goal to "actualize it," so that it is not just international law on paper but is an ongoing, contentious challenge, she said. "There's always that struggle over the implementation," she said.

And, as the last 70 years have shown, there are gaps in the document that have become evident.

"We're always moving forward," she said. "And we know it doesn't cover the span of everything."

For Smith, perhaps the largest gap is the declaration's focus on individual rights, which, while important and even foundational, does not take into account the experiences of communities facing oppression and injustice as communities.

"There is now a recognition that there were peoples not consulted or recognized in the shaping of the 1948 declaration," said Smith, a Canadian sister whose previous mission work includes more than a decade of experience among First Nations communities in rural Canada. "It came from a particular world view, a particular perspective."

That is why, through the years, the U.N. has adopted new declarations advancing the cause of human rights, such as the 2007 United Nations Declaration on the Rights of Indigenous Peoples, a document that the U.N. describes as "the most comprehensive international instrument on the rights of indigenous peoples."

That document established a framework "of minimum standards for the survival, dignity and well-being of the indigenous peoples of the world," the U.N. said, building on already-existing human rights standards, as well as "fundamental freedoms as they apply to the specific situation of indigenous peoples."

Even with its many challenges and shortcomings, the 1948 declaration deserves its moment of recognition, Kinney argues. The 70th anniversary is an opportunity to affirm what progress has been made in the world, and also pay respect to former First Lady and Commission on Human Rights Chairman Eleanor Roosevelt, who was, as Kinney notes, "the driving force behind its creation."

"We owe her a debt of gratitude," Kinney said of Roosevelt. "It is an inspiring document to read and proclaims the universal recognition that basic rights and fundamental freedoms are inherent to all human beings."

Indeed, the universality of the document is a key part of what is being celebrated today. The declaration is officially recognized as the most-translated document in the world, now available in more than 500 languages, according to the U.N.

The rights enshrined in the declaration "belong to everyone, everywhere; they have no physical or [moral] frontier. Human rights are not the sole purview of north, south, east or west; or of developed or developing countries," Guterres said. "They are independent of nationality, circumstances, gender or sexual orientation, race, religion or belief." 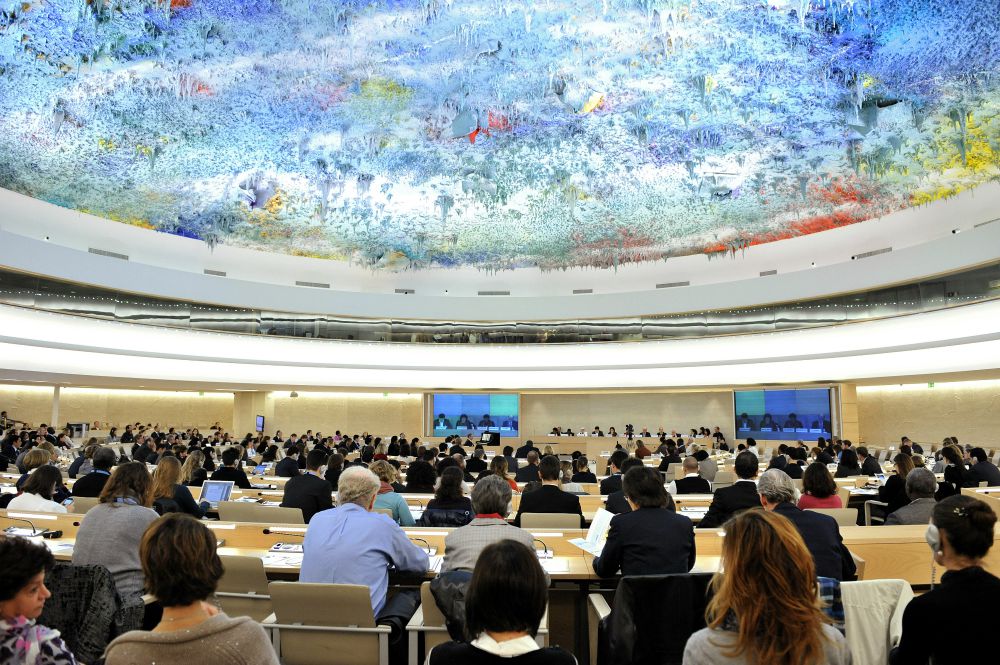 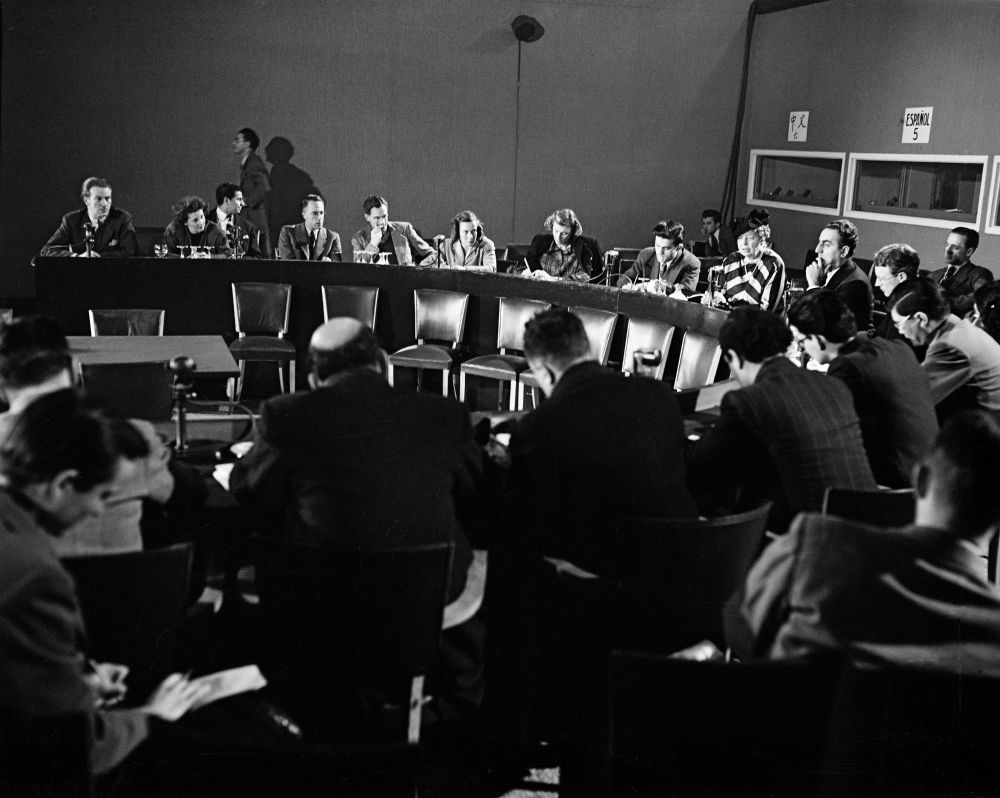 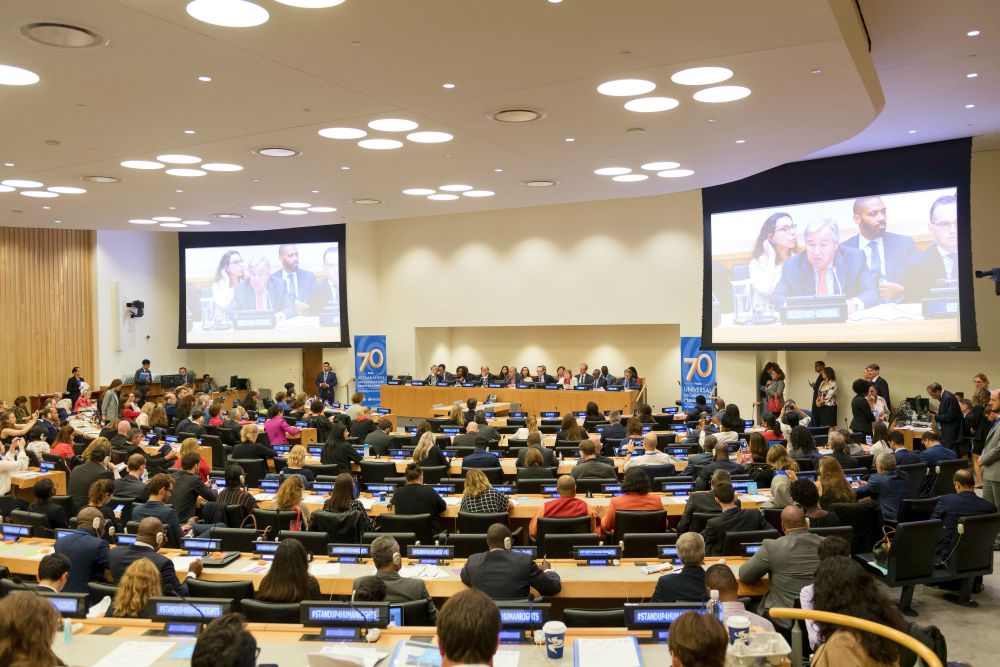 Video of liturgical procession Aug. 22 for evening Mass during the World Meeting of Families. (YouTube/Jamie Manson) 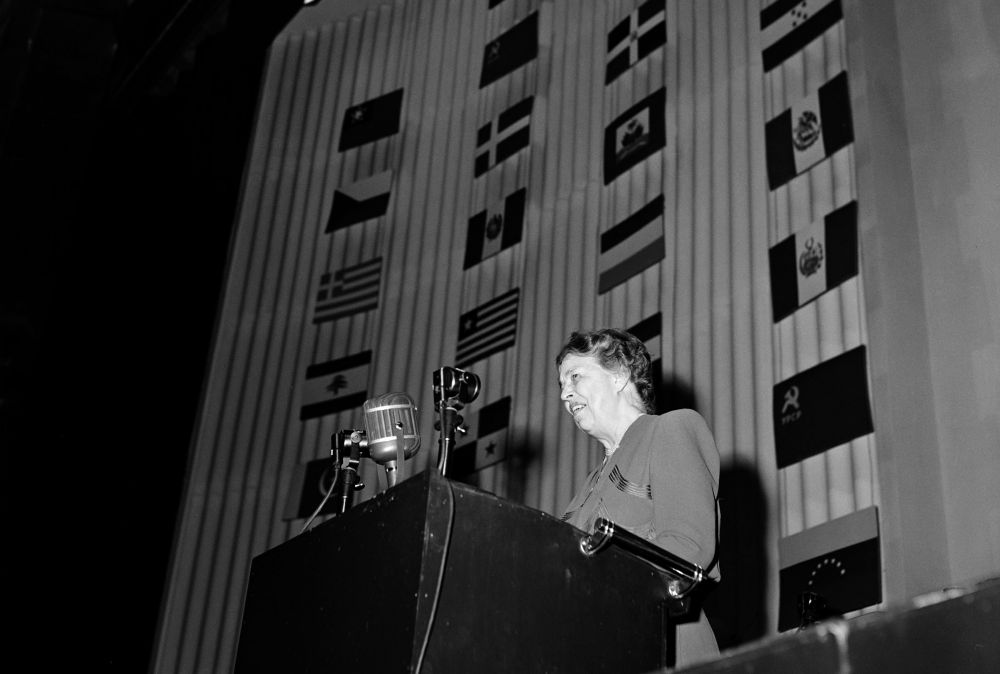