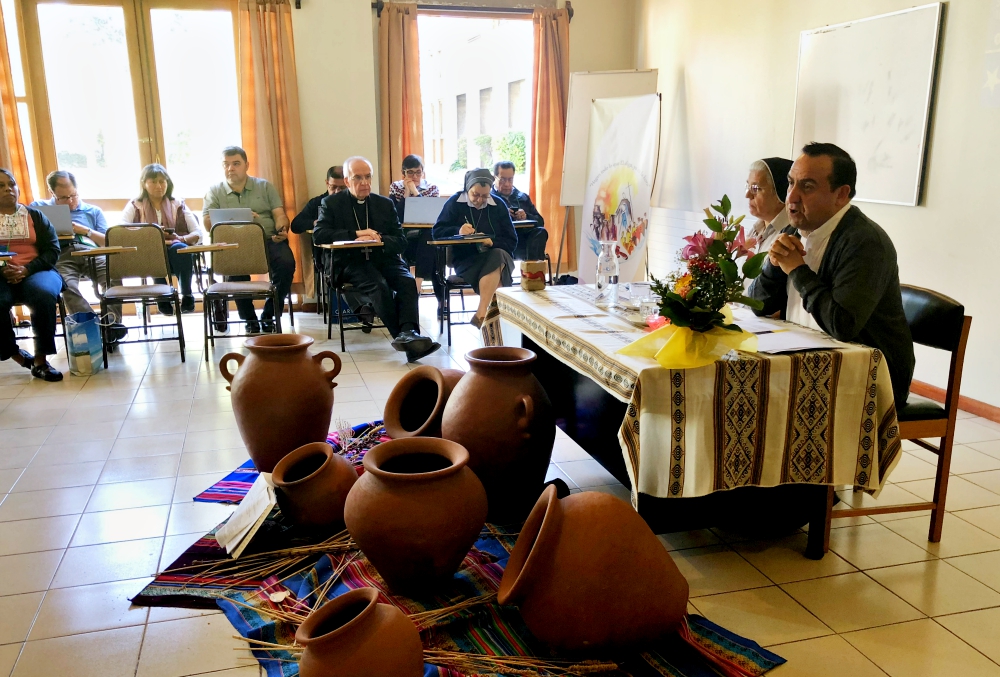 Good Shepherd Sr. Adela Reyes and Viatorian Fr. Marcelo Lamas offered a message on behalf of the Conference of Major Superiors of Chile's Religious (CONFERRE), sharing how the Chilean religious experienced the 2018 clergy sex abuse scandal and offering what they have learned since.

Every year for its gathering, CLAR chooses a location relevant to that moment in history, and in August, it selected Santiago to host the March 18-20 meeting and its 60th anniversary.

"We felt that the Chilean church was especially hurting, and we wanted to recognize the church's sins," said Company of Mary Sr. Liliana Franco, president of CLAR. Traveling to Chile as a conference was both to demonstrate solidarity with the victims, as well as way of communicating hope, she said.

Kicking off the first day of the conference, Reyes said she experiences the church's crisis "as a family crisis," calling this a "difficult, painful, shameful time, which provokes a lot of anger and distrust of the hierarchical structures of the church."

"Within the church, religious life lost the prophetic and creative audacity. We have not become aware of the gravity and the share of responsibility that we have had in this painful and conflictive situation," she continued.

"We need to heal like religious life and be an active part in the collective that promotes the healing of others' wounds."

The sum of the abuse cases involving religious, diocesan priests and bishops — particularly the public case involving a former priest, Fernando Karadima, whom the Vatican found guilty of sexually abusing minors in 2011 — "marks a before and after in the Chilean church," Lamas said.

"They have sharpened this crisis, the other faces of abuse: the cover-up, the negligent management of the canonical processes, and the difficulty to welcome and listen to and accompany the victims," he said.

In addition, the "painful" appointment, at Pope Francis' insistence, of Osorno's Bishop Juan Barros Madrid, who was accused of witnessing and concealing Karadima's abuses, affected the entire Chilean church, Lamas said. (All of Chile's bishops offered to resign in May 2018. The pope accepted Barros' resignation in June.)

"It is a tremendous sign of this crisis, the decision of the Chilean bishops to resign, placing their positions at the disposal of the Holy Father," Lamas said.

Lamas referenced a 1991 letter by Cardinal Carlos Oviedo of Santiago that he said was symbolic of a "paradigm shift in the understanding of the hierarchical church." The letter, he summarized, drew attention to a society morally harming young people.

"While defending human rights, while preaching about sexual morality and criticizing legislative proposals on divorce and abortion in the '90s, there were consecrated men committing abuses of power, conscience and sex," Lamas said.

"How is this serious contradiction understood? Is it just the dichotomy of the human? Is it just a matter of fragility? Are they just slips? Or is there a way of being a church that generates the structural conditions to commit these abuses?" 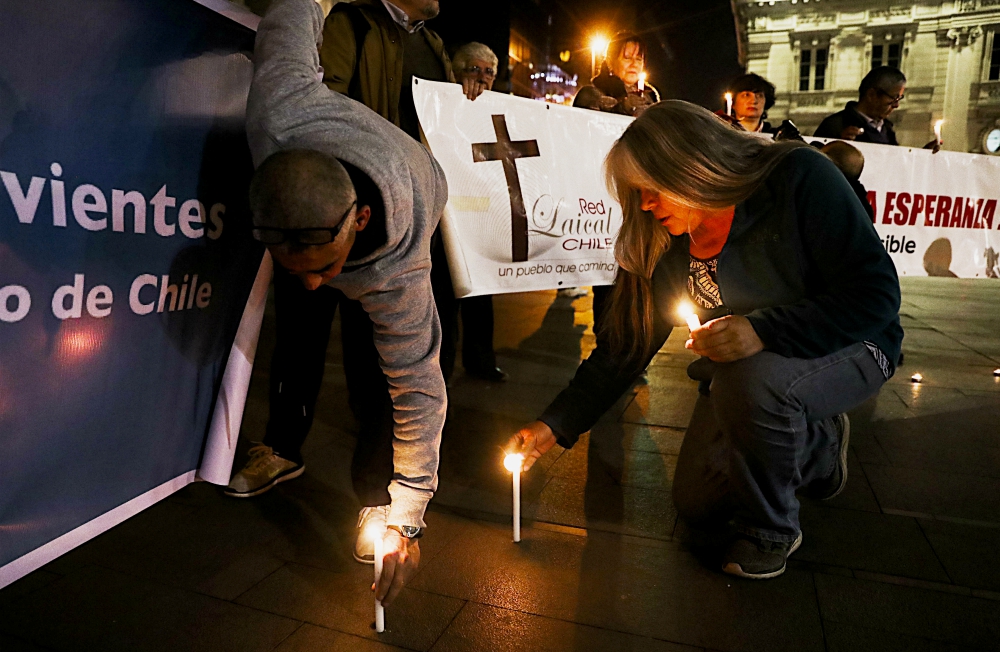 People place candles in front of the Metropolitan Cathedral of Santiago Aug. 20, 2018, during a demonstration against sexual abuse committed in the Chilean Catholic Church. (CNS / EPA / Alberto Pena)

A new way of being a church

Reyes said this moment calls for a leadership in which there is no "first-, second- or third-category Christians, that the active participation of all is not a matter of concessions of goodwill but is constitutive of the ecclesial nature of our communities and apostolic works."

Consecrated life, she added, ought to be "less institutional and more charismatic."

This crisis comes with an opportunity, as the pain has allowed members of the church "to truly see the church that we are and to question ourselves" — positive takeaways, Reyes said. "I trust that this crisis will lead us to build a church more open to the Spirit and therefore more prophetic, more of the people, less 'princes.' "

Though only 35-40% of Chileans trust in the church, down from 80% in 1992, Lamas cited, he said he personally believes that "when the community finds healthy, horizontal spaces where there is freedom of expression without fear, where there is an open and balanced view of reality — the people trust."

Many members with important responsibilities within the church, he said, preferred to "take care of the image of the institution and avoid public scandal rather than tending to the victims. Not only was the reality of sexual abuse denied in certain cases — 'they were only a few cases' — but they were addressed without the recognizing the wound left by an abuse and the consequences for the mental health and the life of faith of the victims."

Lamas quoted the Aug. 3 declaration that Chilean bishops shared with the conference:

We humbly recognize that we have failed to fulfill our duty as pastors by not listening, believing, attending or accompanying the victims of grave sins and injustices committed by priests and religious. Sometimes we do not react in time to the painful "sexual abuses of power and authority" and, therefore, we apologize in the first place to the victims and survivors. In this hour we also express our repentance before those who have accompanied the victims, their families, those who have made responsible efforts to seek truth, justice, reparation and purification, and the hundreds of consecrated men and women who daily give testimony of the love, mercy and redemption of Christ and that are affected in his ministry because of errors, sins and crimes committed.

Yet Lamas said he still has doubts that the bishops are aware of the level of change required, particularly in how bishops exercise their ministry in the church. Lamas noted their tendency to be distant and more concerned "with the image than with generating real pastoral and community-conversion processes."

He said many laypeople have shared a struggle against the culture of silence and concealment above all.

"There are many women and young people who express their fidelity to Jesus Christ in the midst of a wounded church," he said. "I hope that this wound is the wound that causes the pain of the victims, the shame and anger that betrays the consecration of priests and religious, and not that narcissistic wound that arises because public opinion has lost confidence in us or because our ecclesial image is broken and questioned."

To pin the crisis on the perpetrators' lack of self-control, particular personality disorders or psychopathology, Lamas said, is not enough: "The problem is that there is a certain way of being a church, a structure that allows and generates these abuses." 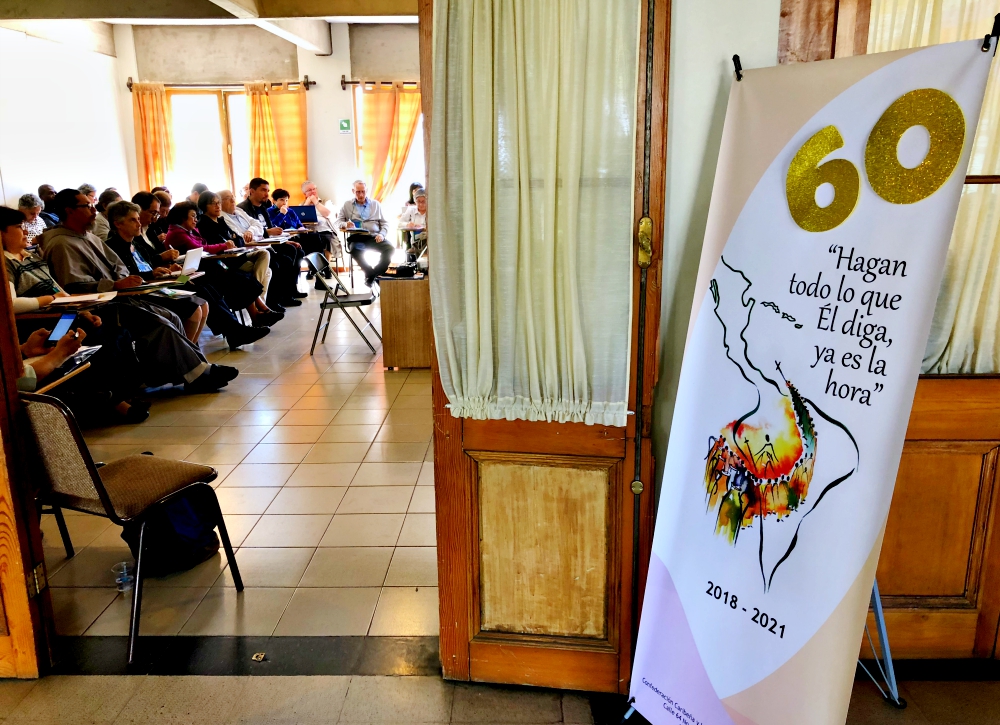 A banner seen at the CLAR conference, which was celebrating its 60th anniversary, reads, "Do everything He tells you, now is the time," inspired by John 2:5. (GSR photo / Soli Salgado)

Reyes noted that religious life today continues with the same structures from long ago, despite being much smaller communities.

"As long as we do not mobilize to change the mental structures and seek together a new way of to live fraternity and communion, we will remain stagnant," she said. "We have to work together tirelessly to design a culture of care, with prevention, possible solutions, protocols regarding our ways of relating, praying, thinking, living the authority, our practices, customs and languages, and our relationship with power and money."

To truly be a church "in mission," the church ought to allow itself to be "helped and challenged," Reyes said. "Today, the victims, the young, the poor, the indigenous people, the distant ones challenge us, and if we let ourselves, they help us to be a new consecrated life faithful to the Lord."

The "macho" sexist culture today is an undeniable social phenomenon, Reyes said, adding that she sees a religious life that's "very clerical, servile, submissive, incredulous before the abuses committed by priests and religious, which is not confronted, uncritical against the abuse of power, which accepts being infantilized and minimized by the masculine religious world."

Consecrated women ought to empower themselves, Reyes said, and she concluded her message by presenting two paths that women religious can ultimately follow:

One: continue to be subjugated to the power of the male with a childish servility that does not make us grow.

Or two: Recognize ourselves as valuable and capable, autonomous and determined to deal with this historic moment in which we live. Let us enlighten and lead by the Spirit to the example of our founders. Be brave, risky and determined to fight for justice and equality. ... No more asymmetrical relationships, but to work in a horizontal manner, always serving the beloved of Jesus, the poorest.

Closing his message on behalf of CONFERRE, Lamas said the church should advance with a "sincere, prayerful and even often painful recognition of our limits, sins and crimes."

"Undoubtedly, we must comply with the protocols and collaborate with civil justice. But we must continue to reflect on the style of relationship and exercise of ecclesial ministries. Many times, they are inadequate, improper, and others are constitutive of crime."

Lamas also added that, until recently, it was taken for granted "because we were consecrated, our conduct was always ethical." To deepen the application of the guidelines in matters of prevention, protocols and ethics, he said, religious life should invite the help of social, legal and mental health specialists. He also called for more pastoral supervision in apostolic works and for religious life to be open to evaluation and accompaniment, "especially by lay brothers and sisters."

And "the experience of our sexuality and affectivity remains a pending issue," he said. "We must ask ourselves again how we understand and approach homosexuality in religious life and in the priesthood. We need an adult attitude in ongoing formation."

Lastly, he called for Catholic religious to assume more responsibility in living their vocations, "to be aware of the witness we give to others and the way we relate and exercise authority. We must constantly ask ourselves how we are generating and fostering a more horizontal, participatory pastoral, with a greater role for women and young people."

Letting go while giving thanks

Ministry on the gender margins