Some 14 masked women on the eve of International Labor Day, May 1, stooped over pounding sewing machines in a factory run by nuns. It is a place where fabric isn’t the only thing being put together into something whole and useful.

They also stress the Gospel value of work and offer retreats, joint prayer and Masses. This is rounded out with personal and family counseling.

For some workers, like Margie Rose Butlig the Siervas Sisters have done much more.

“They have been to me like St. Joseph was to Jesus – except they are nuns,” the staff in charge of production told Global Sisters Report.

The sisters brought her and five of her 10 siblings to live in the center in 1998 after their mother died of cancer.

“Before coming here, we lived in a very small house made of tent material in one of the squatters’ areas in the city. My father would come around when he had money and disappear when it ran out,” Butlig recalled.

The sisters met them during their regular home visits to poor families.

“I was 19, a high school graduate with no experience in sewing when I first came to work in Nazareth. I discovered how to sew here, and now I do it well. I can even make patterns now. Recently I was assigned to take charge of production,” the leading seamstress said.

She said she never expected to reach her current state – receiving minimum wage, social security and health benefits, a living allowance, rice allowance, and a birthday bonus. She also availed of a chance to buy from a low-cost housing project.

She told GSR that years ago she  thought the fears and bitterness she carried from her troubled childhood would permanently pull her down.

When she was around 10, Butlig’s father brought his older children to live with his family in Agusan del Sur, in southern Philippines, while the smaller ones stayed with her mother.

Butlig remembers: “We slept on the floor and around 3 a.m. my aunt would kick us to wake us up to sweep up leaves in the yard. We were small and it was so dark and we were very afraid. We were crying together sweeping the leaves. “

She remembers her aching tummy waiting for breakfast, which came around 9 a.m., “after the dogs were fed.” They had to gather firewood and plant rice.

“I was so bad at keeping the seedlings from floating away, and I kept fainting in the paddies in the heat.”

But her biggest worry was still to come when the sisters sent for the siblings after their mother was diagnosed with advanced cancer. Back home in her teens, Butlig had to fend off her father’s advances after returning from drinking with friends. She was also concerned about protecting her little sisters from him.

“He also would peek and watch us when we bathed. It made me so afraid that I used to bathe with my clothes on even when we moved with the sisters,” she recalled.

When Butlig’s mother died in 1998, Butlig thought her family would be parting ways with the Siervas Sisters.

“The sisters already did so much for her – they got her a coffin, helped to get her body released by the hospital, even our mourning clothes came from here; they sewed for all 11 of us,” Butlig said. The nuns also gave the younger children a place in their community.

“It was here (Talleres) that my life became so clear,” Butlig says. She is grateful to Sister Marcelina Santa Cruz for counseling her.

“She was very patient with my fears through these years. When I first arrived here, I was very quiet and withdrawn. She would talk to me even when I wasn't that responsive. When we talked she would pose questions and challenges that really make me go deep inside my thoughts and in my heart to examine what I wanted and what was right for me to do. She never would give sermons.”

Butlig told her counselor after a fight with her husband that she would like to just get away and work overseas.

“Sister (Santa Cruz) asked me whether I was ready to leave other people behind.”

She now focuses on raising her 9 year-old son, after separating from her husband more than eight years ago.

On Tuesday, she climbed up the stairs to consult with the cutter in fabric supply and occasionally checked in the sewing room where the women and a tailor were putting needle to fabric using one of the 34 special machines.

“I was just recently placed in charge, so I'm not yet that good at it, but I never looked at my work as something negative. For me if I accomplish a job, I'm excited for the next project,” Butlig said.

She estimates by second week of May, the “on-call” workers or extra hands would be done with their work.

“I enjoy my work here and I'm grateful to have it,” Butlig said. “All my struggles and pain cannot outweigh blessings I received from working at Talleres.”

[N.J. Viehland is a correspondent for Global Sisters Report, based in the Philippines.] 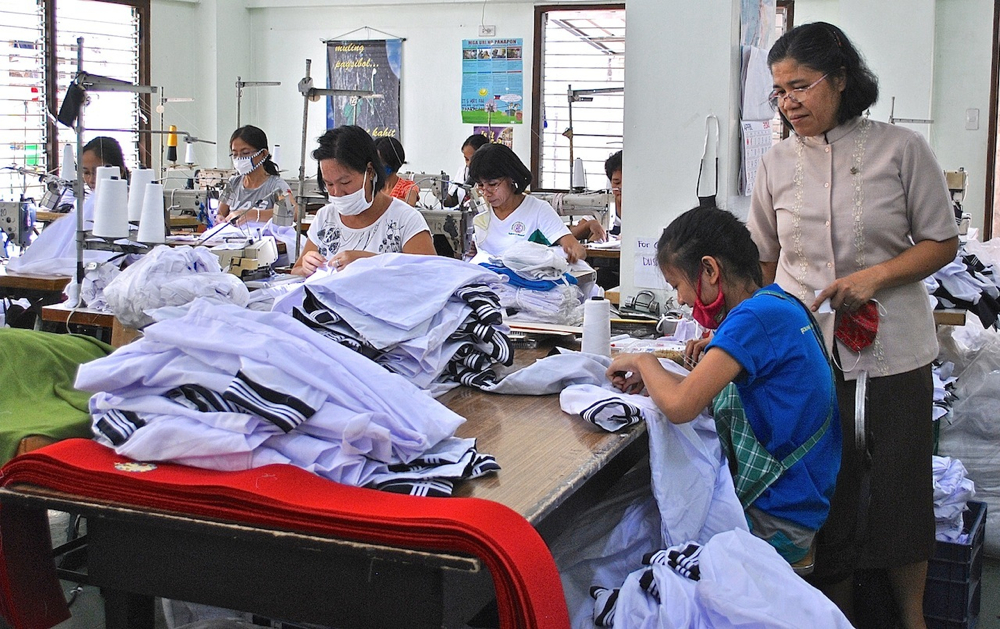 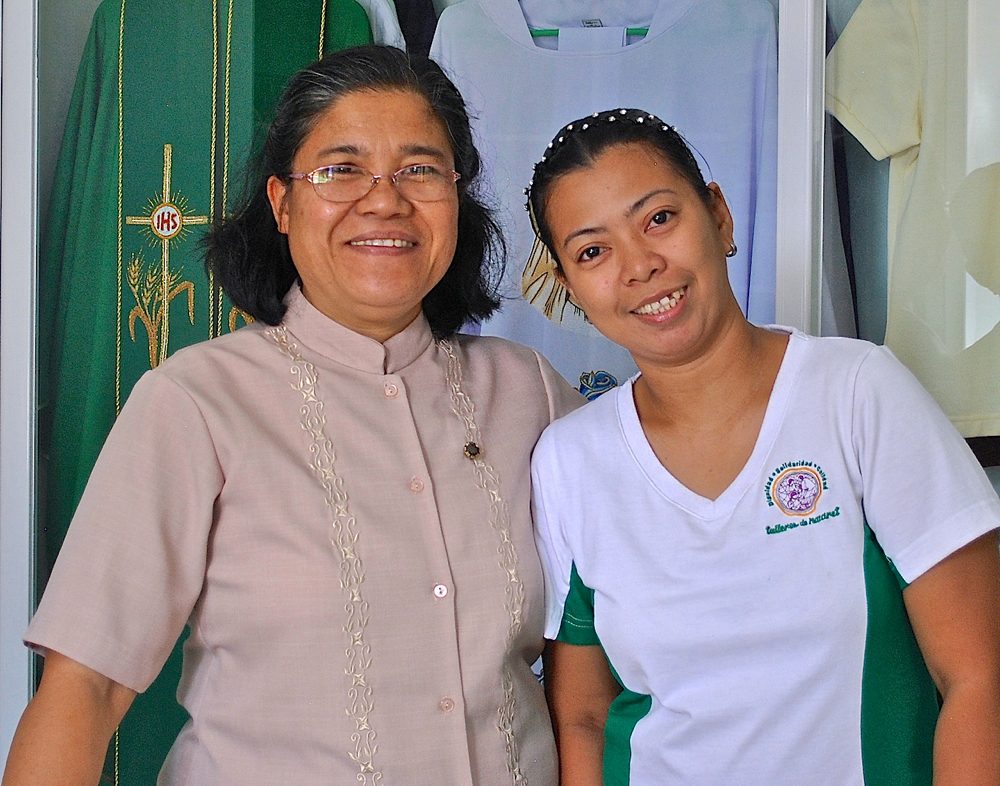 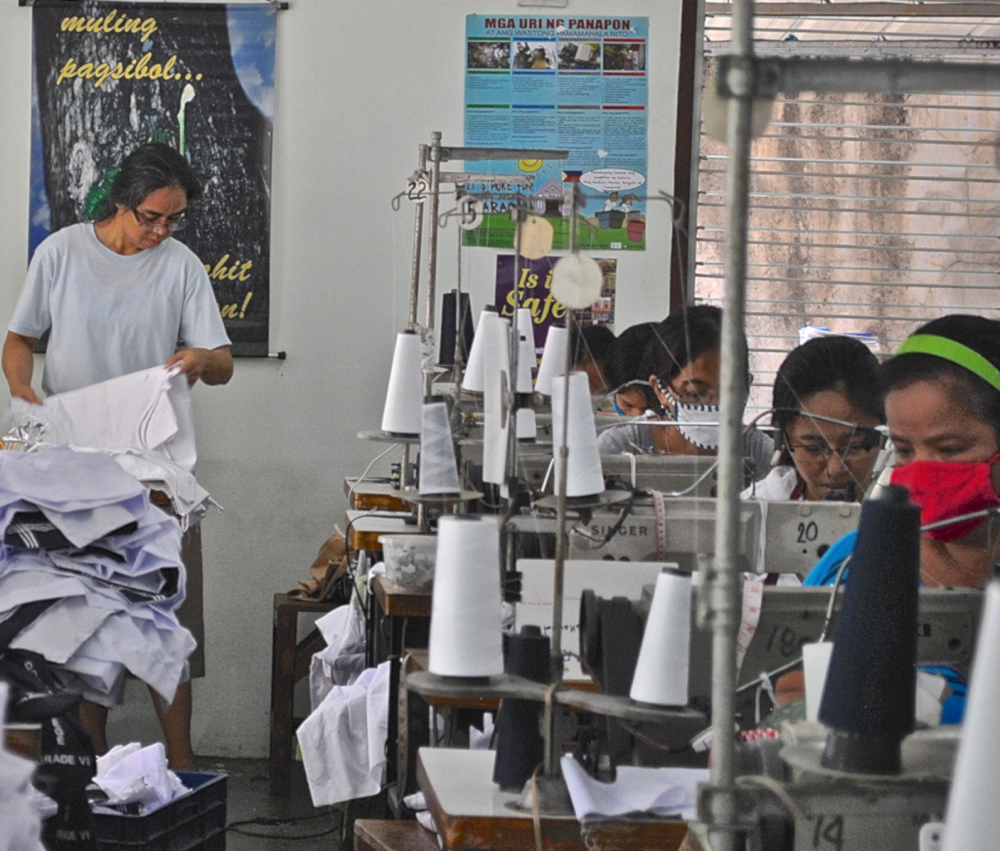