The nationwide campaign for 10 million signatures to pass a bill that will abolish the pork barrel system kicked off here today with a rally in Luneta Park co-organized with the Association of Major Religious Superiors of the Philippines (AMRSP).

The campaign is part of an effort needed to enact a law drafted through "people's initiative" that would prohibit all forms of pork-barrel budgeting, explained Benedictine Sr. Mary John Mananzan, co-convener of Abolish Pork Movement civil society group.

"Even when the court declared that legislators' Priority Development Assistance Fund [PDAF] or President Benigno Aquino's Disbursement Acceleration Program [DAP]  unconstitutional, the officials can put in the budget millions of pesos of discretionary funds by other names," the nun told thousands of people gathered at the park.

Rally participants earlier in the day split up to sign the petition at designated tables for cities where they are registered as voters. Others watched a program to commemorate last year's Million People March against PDAF after employees of Janet Lim-Napoles revealed that 10 billion pesos (nearly U.S. $228 million) of these funds were released to legislators and their staff and to Napoles through bogus nongovernmental organizations supposedly for projects.

"We define pork barrel as any undesignated lump sum amount that would be placed under the discretion of one to three persons," Mananzan said. "We do not like this because this is the source of corruption and irregularities, political patronage and other problems."

She said anti-pork activists believe there should not be any of these funds except for about a couple of exceptions that are "really, really needed by the country."

Mananzan said the campaign targets 10 million voters' signatures, even though Republic Act 6735 requires signatures of 3 percent of voters in every legislative district, or 6 million signatures. The petition asks the Commission on Elections to conduct a referendum on the proposed People's Initiative Bill titled "An Act Abolishing the Pork Barrel System."

A People's Congress of more than 1,000 participants from church, political and civil society groups formally launched the bill in Cebu City, southeast of Manila, on Saturday. If ratified, it will abolish the presidential and congressional pork barrel, mandate line-item budgeting, prohibit and criminalize lump sum discretionary funds and penalize violators with six years and one day to 10 years imprisonment and perpetual disqualification from holding public office.

Bishops who could not join that Congress sent messages of solidarity and support. More than 70 members of the Catholic Bishops' Conference of the Philippines voted to promote the movement, Mananzan said.

Cardinal Luis Tagle thanked the Congress "for making democracy alive and active," "for advancing decency in public life" and "for giving voice to victims of corruption."

After discussions, Congress participants marched to People's Park where Archbishop Jose Palma of Cebu led the signing of the petition.

From Cebu to Philippines parishes

In Manila today, Mananzan said with the bishops' support, the movement is counting on parishes around the Philippines to help inform people and collect signatures.

"AMRSP also endorsed this and they have convents, schools and institutions around the country, so if you just look to the church network, then it's very possible and I am hopeful," about gathering enough signatures if parishioners help out, Mananzan said.

Religious and members of their institutions were prominent rally participants at Luneta, along with groups of nurses and health workers, teachers, lawyers, private and government workers – and even beauty queens.

Close to 20 Dominican Sisters of St. Catherine of Siena came with their banner declaring their opposition to the pork barrel system. Some signed the petition.

Their director for justice and peace and integrity of creation concerns, Sr. Cecilia Espenilla told NCR aside from joining rallies, "We try to hold activities in school for students to appreciate and learn that this pork barrel system causes corruption that is not acceptable for us Catholics who value honesty and sincerity."

La Salette Sr. Sonia Silverio told NCR her fellow farmers in her mission area in Quirino province north of Manila "know well" the pork barrel issue and are angry that these funds had not been used to help with irrigation of farms.

"They also ask why none of these funds are used to improve health services and education," Silverio said.

In his homily for the Mass at Luneta, Missionaries of Jesus Fr. Wilfredo Dulay stressed, "Ours is a people of hope crafting and wanting to believe in the possibility of a better tomorrow. We are a people who look forward to new beginnings – always desirous for a fresh start – may it be after an earthquake, a typhoon or disastrous government."

Common people are angry about PDAF and DAP because they feel betrayed by broken promises, being told to believe that prevailing poverty is due to lack of funds, Dulay added.

"Abolish the pork, and the true leaders would emerge – not those who are engaged full time in self-service, but leaders who would want to serve the people and build up the nation," the priest said.

[N.J. Viehland is a correspondent for National Catholic Reporter based in the Philippines.] 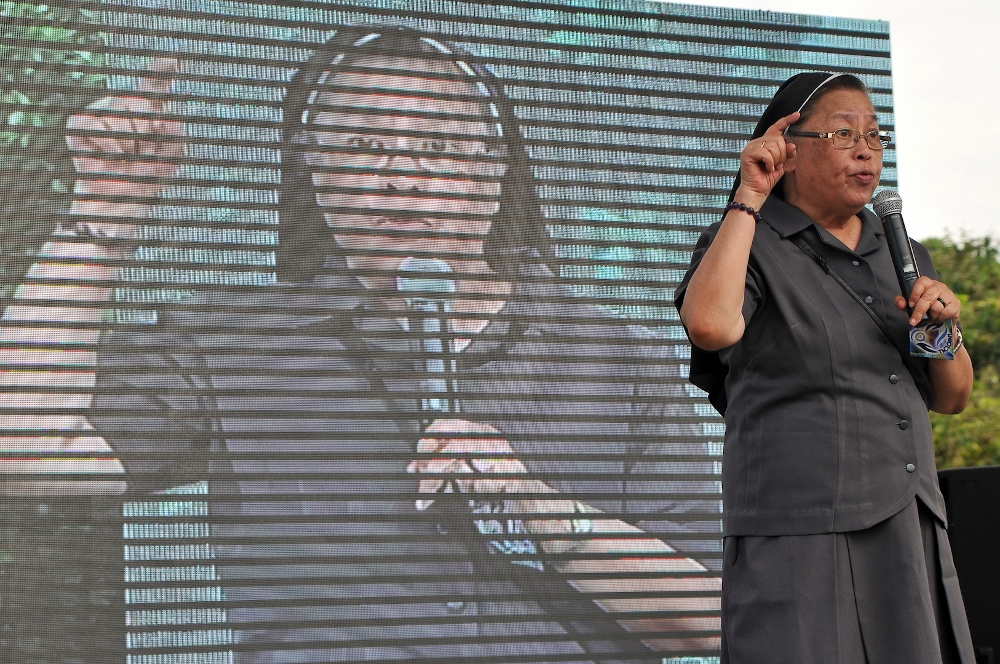