by Catholic News Service
Social Justice
This article appears in the Abuse of sisters feature series. View the full series. 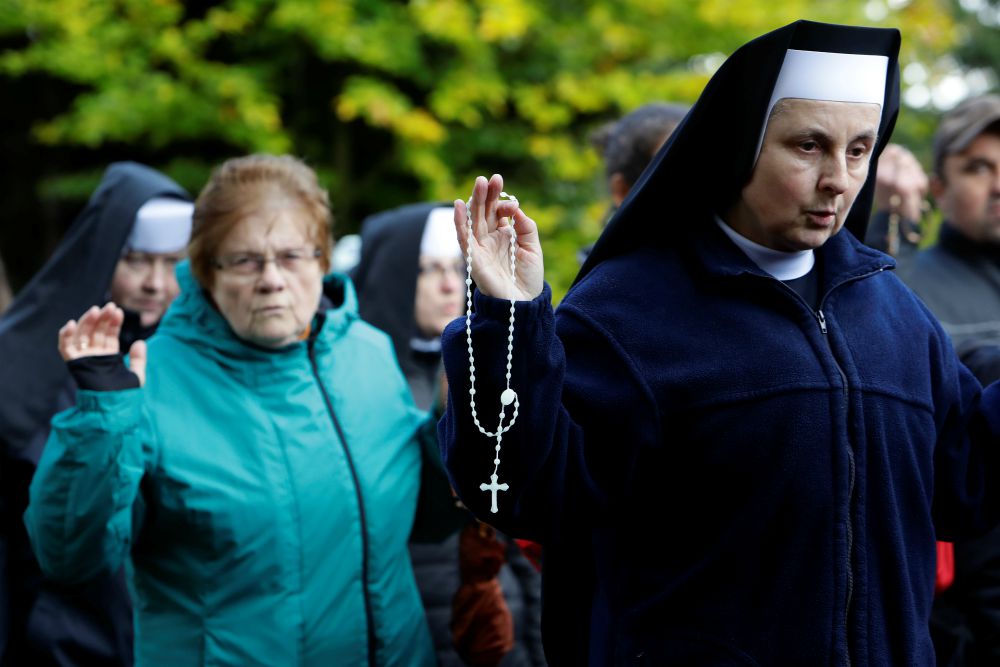 Nuns and others pray as they walk through the forest during an Oct. 7, 2017, mass rosary prayer on the Polish-Czech border near Szklarska Poreba, Poland. (CNS/Reuters/David W Cerny)

Warsaw, Poland — One of Poland's most senior nuns said priests must stop sexually molesting religious women, in line with efforts to improve treatment of women in the traditionally Catholic country.

"Sexual abuse of nuns by clergy has long been a problem in Poland — and it's a very painful matter," Ursuline Sr. Jolanta Olech, secretary-general of the Warsaw-based Conference of Higher Superiors of Female Religious Orders, told Poland's Catholic Information Agency, KAI.

Olech told KAI Feb. 14 that no data had been collected on the abuse of nuns in her country. However, she added that she had been informed of "very painful" cases during 12 years as conference president and secretary-general, and she welcomed Pope Francis' Feb. 5 call for action against offending clergy.

"This isn't the first time the issue has been raised, and we don't know if it will change much — but it should show some people at least that the time for concealing this problem is over," she said. "The cases I dealt with were reported to the superiors of the priests and monks concerned. But I don't know what the results were, and the cases were never made public."

She said one young nun had been forced to leave her order after becoming pregnant, while the priest who fathered her child had remained in his post without "any serious consequences for his behavior."

Poland is currently home to more than 17,000 nuns from 105 congregations, mostly engaged in teaching, health care and charity work, with a further 2,000 ministering abroad, according to a late-January church report.

Female orders run 800 schools and education centers and 119 orphanages and children's homes, as well as 80 clinics and more than 300 homes for the elderly, handicapped and homeless. Many also work in parishes, seminaries, diocesan offices and media centers.

Speaking to reporters while flying back to Rome from the United Arab Emirates Feb. 5, Pope Francis said the church was tackling the "scandal" of priests and bishops who abused nuns, adding that the problem's roots were in a society "seeing women as second class."

In November, the International Union of Superiors General, representing more than 500,000 women religious worldwide, condemned the "culture of silence and secrecy" surrounding the "pattern of abuse prevalent within church and society."

A prayer for peace, hope and the miracle of being Ukrainian