Skip to main content
This story appears in the Rwanda feature series. View the full series.

When the sun rises on the last Saturday of each month in Rwanda, it dawns over a country blanketed in silence. The ubiquitous motorcycle taxis, which stream across the city non-stop, disappear. Stores are shuttered, streets are empty.

Once a month for four hours, the entire country shuts down to take part in government-mandated community service called "Umuganda," a Kinyarwanda word that means "coming together in common purpose to achieve an outcome."

Rwanda's monthly day of good deeds is the government's innovative — though mandated — solution to the challenges the country faced after the 1994 Rwandan genocide, when more than 800,000 people were killed during 100 days of fighting.

"We call it 'Made in Rwanda,' unique things that Rwanda needs to do to overcome our unique challenges," said Faustin Zihiga during Umuganda Day at the end of February. Zihiga and about 100 of his neighbors spend each Umuganda cleaning up Kimana Village, their middle-class neighborhood in the capital of Kigali.

"After the genocide, the leadership had to look for ways to rebuild a shattered community," explained Zihiga. "They came up with things that will help people revive the voluntary spirit."

In the 23 years since the genocide, Rwanda has developed at a rate far exceeding anyone's expectations. The steady 8 percent growth in GDP over the last 15 years has catapulted Rwanda beyond its struggling neighbors to an orderly country with excellent roads, spotless cities, and effective government institutions with almost no corruption.

Zihiga, who works at a bank in Kigali, noted that the Umuganda tradition predates the genocide as "ubudehe," when communities would gather to cultivate fields together. Ubudehe slowly faded out of use as Rwanda transitioned from a bartering society to a cash-based society in the second half of the 20th century. After the genocide, the government revived the practice with a focus on community beautification and development, and christened it with the new name of Umuganda.

According to Kigali Today Press, a pro-government English-language news agency, Umuganda has saved the country 106 billion francs (US$128.5 million) over the last decade. In some areas, villages might band together to undertake major infrastructure projects, such as building and paving roads or constructing health centers and schools. Other work includes repairing broken water pipes, laying irrigation lines, painting crosswalks, gardening, weeding, street sweeping and general beautification.

Attendance at Umuganda is compulsory. Every household must send at least one representative over the age of 18. People do Umuganda with their local village, or, in a city, residents are divided into neighborhood work crews. There are 20 to 150 families in each group.

If someone misses too many Umuganda sessions without an approved excuse from the local council, the government levies a 5,000-franc ($6) fine against them, a huge amount of money for many people. The average income in Rwanda is $718 per year, about $2 per day.

The Umuganda commitment consists of about three hours of physical work and one hour of community meeting. Local leaders decide what work will be completed each month and send trucks with loudspeakers around their neighborhoods to inform people where to meet and which tools to bring.

"Most people like it because it's the only day you meet your neighbors," said Zihiga, in the midst of using a panga, a curved blade, to cut grass next to a dirt path leading to his neighborhood. "See those people over there, talking?" he asked, gesturing to a lively group of men, leaning on their hoes and laughing. "They haven't met all week, and now they are meeting up. It helps a lot because the more you get to know each other, the more you're socially connected."

"Umuganda is helpful beyond cleanliness," Zihiga continued. "For example, if we see someone that can't afford health insurance — it's 3,000 francs [National Insurance costs $3.50 per year for all Rwandans and is compulsory] — and we hear about it, then we can all contribute to try to raise the money. If we see an elderly person who is struggling, perhaps they need a new roof built, then people will help out to build it together."

The hour-long meeting is a chance for communities to hash out issues and get information. Representatives from the health ministry or local clinics may do a short lecture on basic sanitation or avoiding malaria. At the community meeting in Kimana Village in February, a nurse gave a talk on children's vitamins, and the neighborhood community security officer, a former soldier, lectured about the dangers of drug use.

"If there are specific problems for social issues, like maybe a neighbor is making a lot of noise, you can say something about it, and the community members may decide to visit and see what is the issue," said Zihiga. "They will ask you what is going on. You make sure you don't want to look bad with the community because we are a community-based society. You don't want to be isolated. This is a social commitment you have to have."

The meeting is also an opportunity for residents to take part in the national "100 Program" — a savings program that encourages families to deposit at least 100 francs (12 cents) per month into a savings account. The community accountant keeps track of everyone's contributions. There is no interest, but the program has helped families save large amounts of money for school fees or national insurance, explained Kimana resident Yvonne Nshuti. "It's to help people change their minds and think about saving money," she said.

Nshuti said she often looks forward to the last Saturday of every month. "I like Umuganda. We are happy to work and we meet up with friends," she said. "Every morning we wake up and go to our jobs; we don't get to see our friends."

Despite the positivity surrounding the day, most people said that they came because it was a government mandate, and if the government stopped requiring attendance, the tradition would probably fall apart.

"The government asked us to come — it is an order, so we have to respect that order," said Nshuti.

Across the country, everyone takes part: police, politicians, women religious, business people, farmers, storeowners and students. Well-dressed women who work in offices during the week hack away at persistent weeds along with day laborers who live in shacks next to the luxury apartments.

"All of the sisters participate; this is everywhere, all over the country," explained Sr. Philomene Nyirahuku, who oversees formation for the Les Soeurs Auxiliatrices (Helpers of the Holy Soul) congregation in Kenya and Rwanda. "The idea is not to wait for the government to do it for them, but to contribute something to the country and the nation," she said.

Sisters join residents living around their convents for Umuganda day, doing whatever the community leaders have chosen for that Saturday.

"It helps people work together, both for socializing and to do something important for the community," said Nyirahuku.

Sr. Claudine Uwamariya, an Oblate Sister of the Assumption in Kigali, said they use the theory of Umuganda to encourage street children to practice personal hygiene at the Abadacogora Intwari Center. The center, whose name means "working together without getting discouraged," is a Caritas-sponsored program that is part of the Sainte Famille Church in downtown Kigali. Uwamariya works with about 400 street children, providing them with counseling and food in their day program. Umuganda provides both a learning opportunity and a challenge for the street children, she said.

"We encourage them to clean and wash themselves and then clean where we're doing our activities," said Uwamariya. "They know it's something for the whole country, but sometimes they hide during Umuganda because they're not allowed to be in the roads." Police set up checkpoints to ensure that anyone traveling has a legitimate commitment, or to determine why people aren't participating.

"On the day of Umuganda there are no shops open, so they can't get anything to eat," Uwamariya said. "But it also helps kids learn to be good and proper. When we're together and we meet [during the community meeting], we talk about their problems and make decisions to help solve their problems." When street children participate in the Umuganda along with the local community, it also provides an opportunity for the local residents to see the street children, rather than ignore the kids who usually beg them for money, explained Uwamariya. "It makes us look at the problems we have in the community and find a way to resolve those problems," she said.

"Our traditions, like umuganda, like gacaca ["grass courts," traditional courts that were used to bring justice to genocide victims], these are traditional things that have helped the country, bringing tremendous change," said Zihiga, the bank worker in Kimana Village. He believes other countries can replicate Rwanda's community building through volunteer work.

"We're looking to our tradition: Our tradition is umuganda," he said. "But all cultures have a way they used to live together. It's about finding what used to bring the community together and modernizing it, but taking something that is inborn to the place."

After three hours of weeding and pruning under the sun, the people of Kimana neighborhood were ready to start their meeting. They slipped into a shaded grassy area near the main road and signed in on the attendance sheet, sitting quietly as they waited for the meeting to begin.

"It's about helping each other," said Moshe, a Kimana resident in his 20s, as he put down his hoe and headed to the meeting. "When it comes to something that requires more effort, like building a house, you can't do it alone. If you help others, then they will help you when you need it." 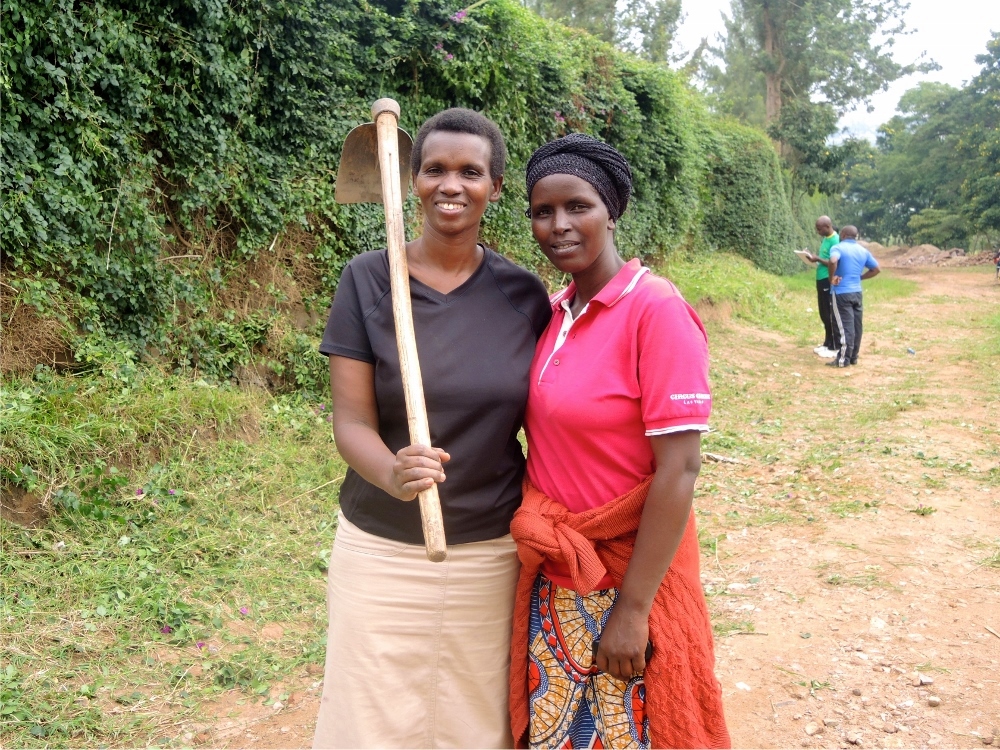 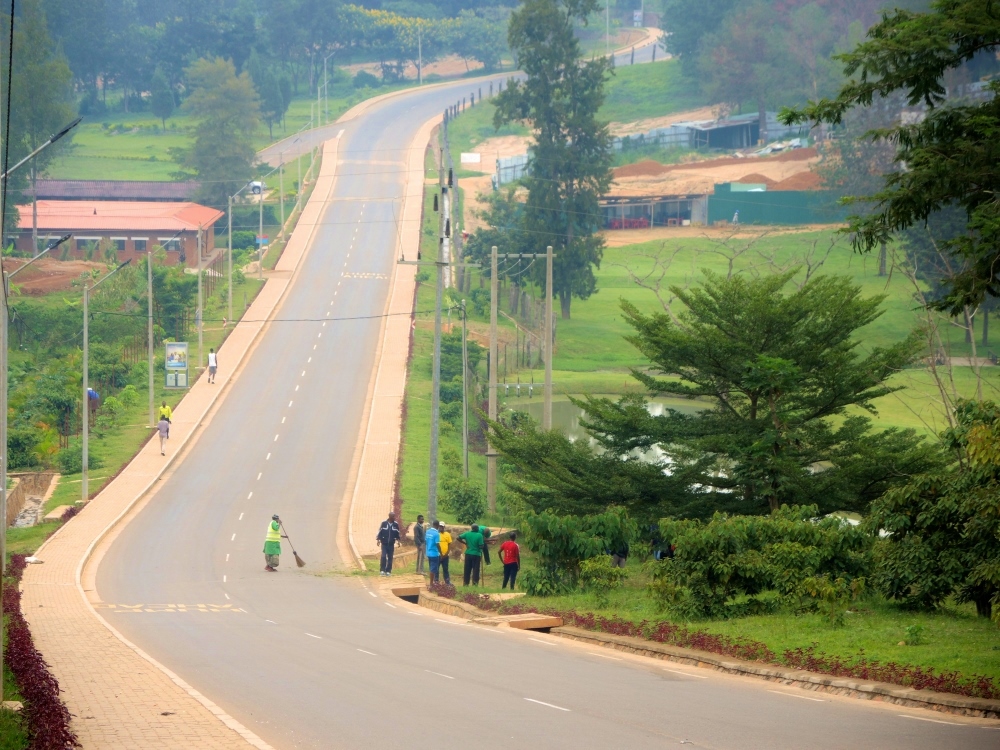 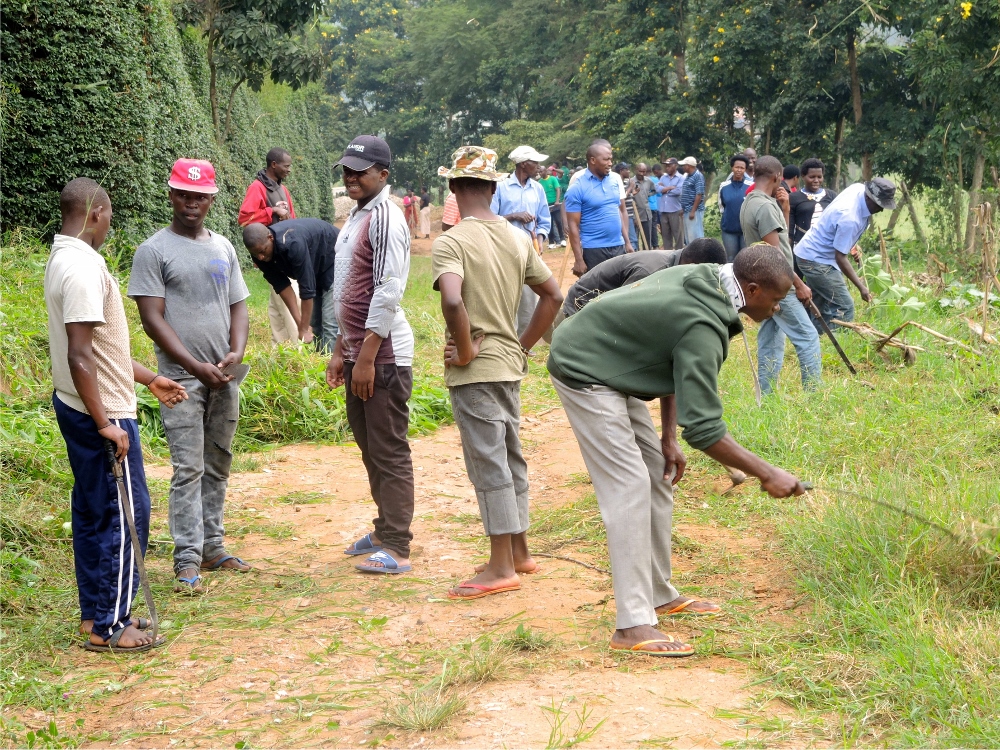 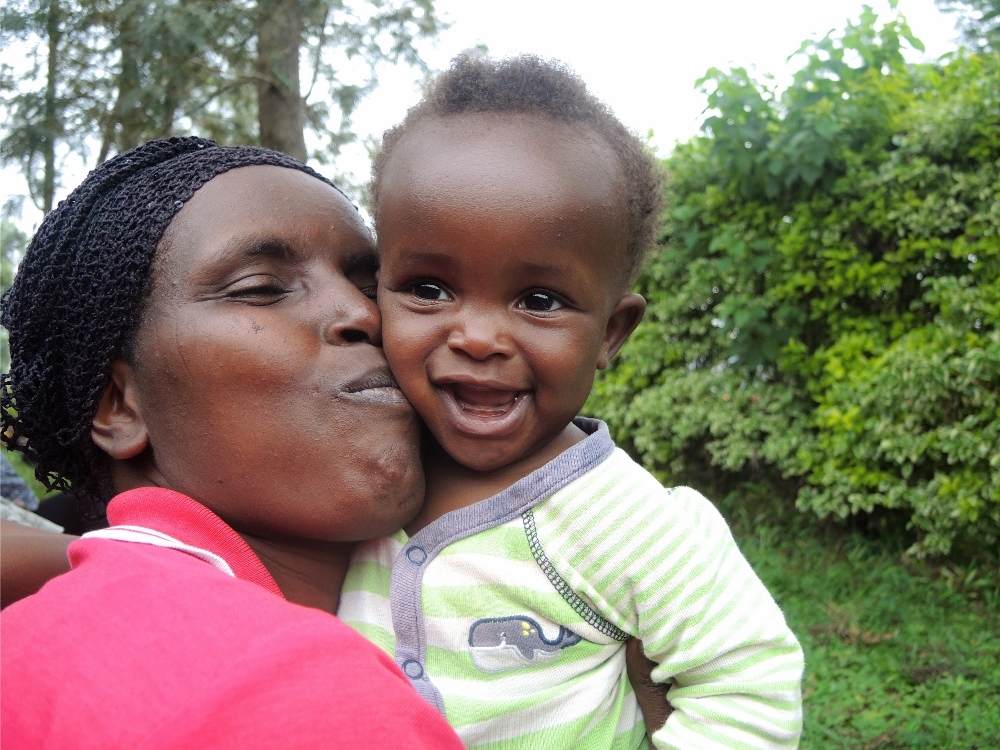 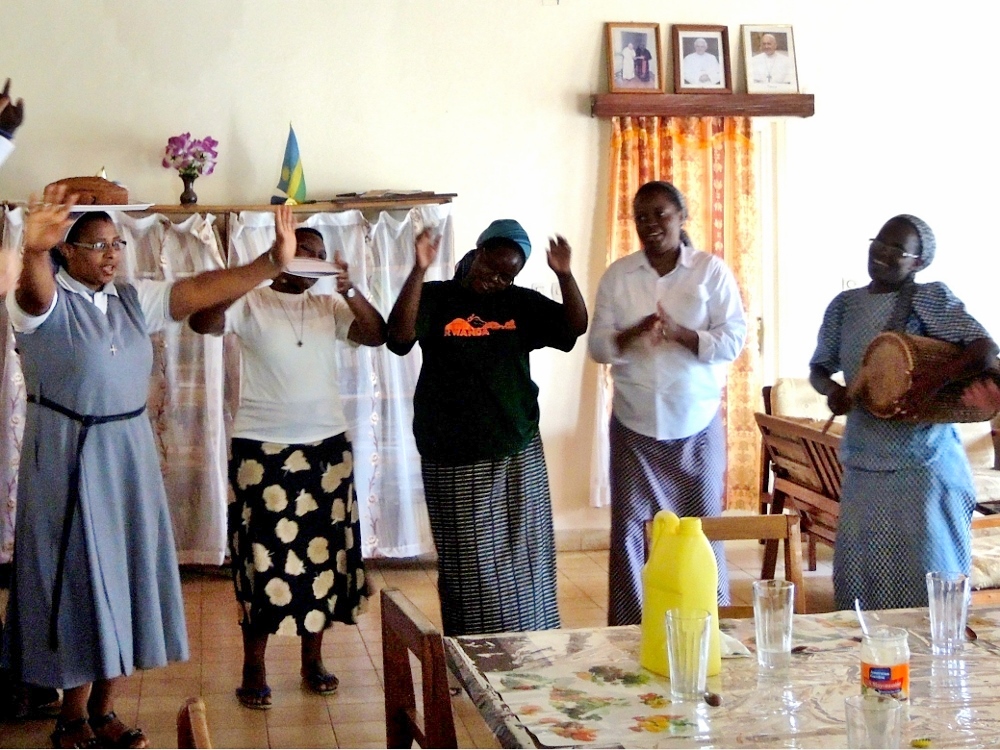 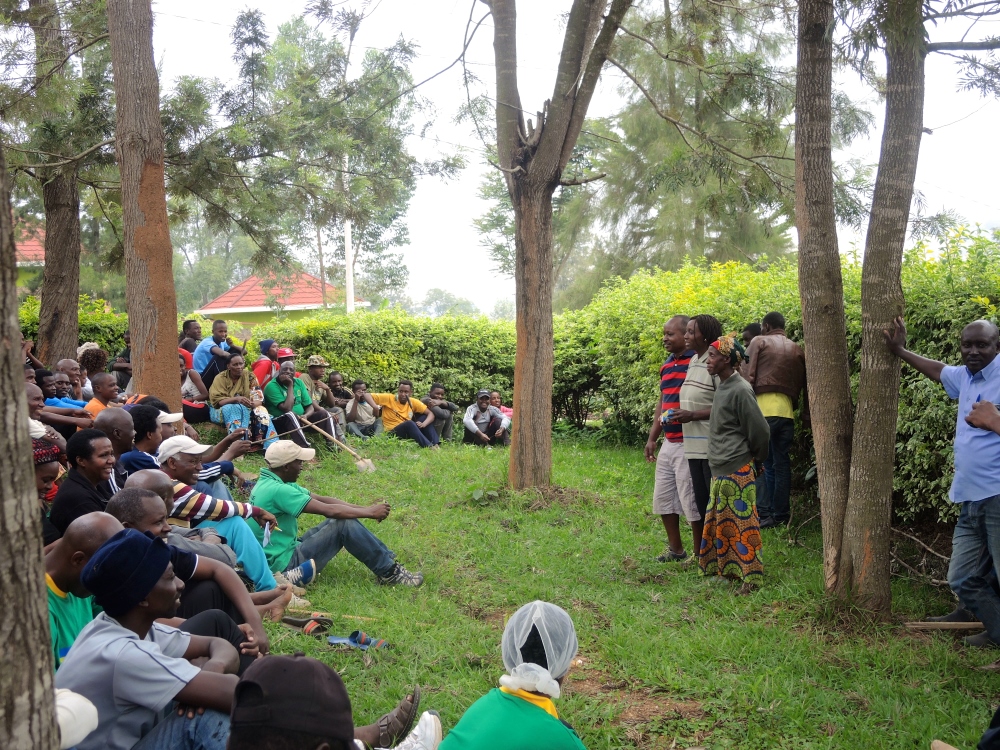 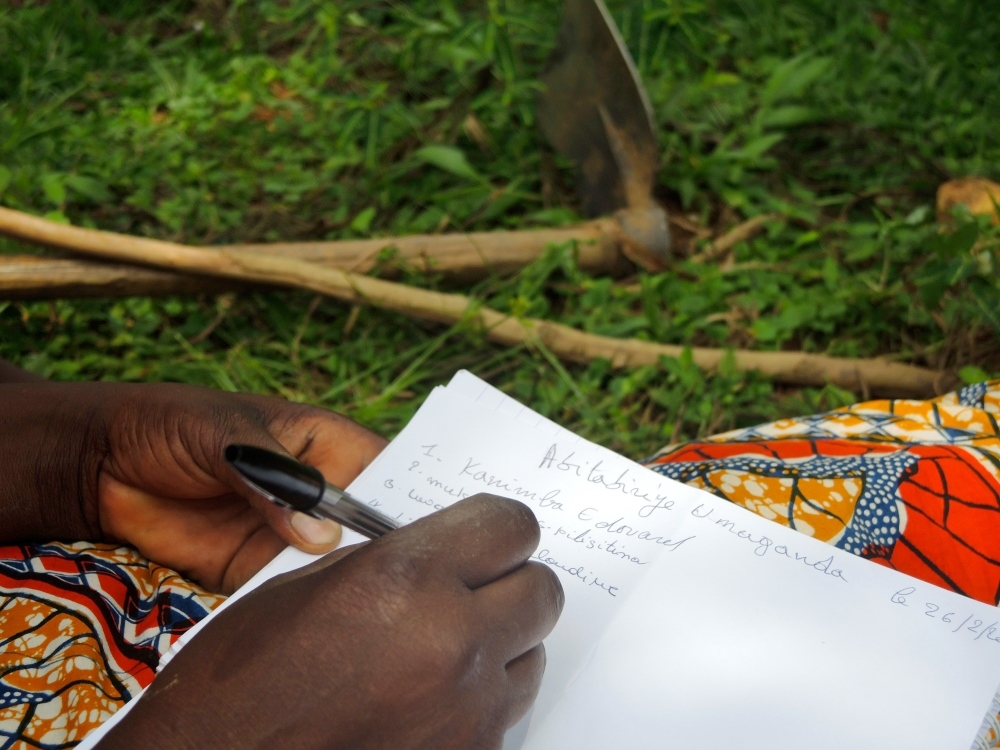