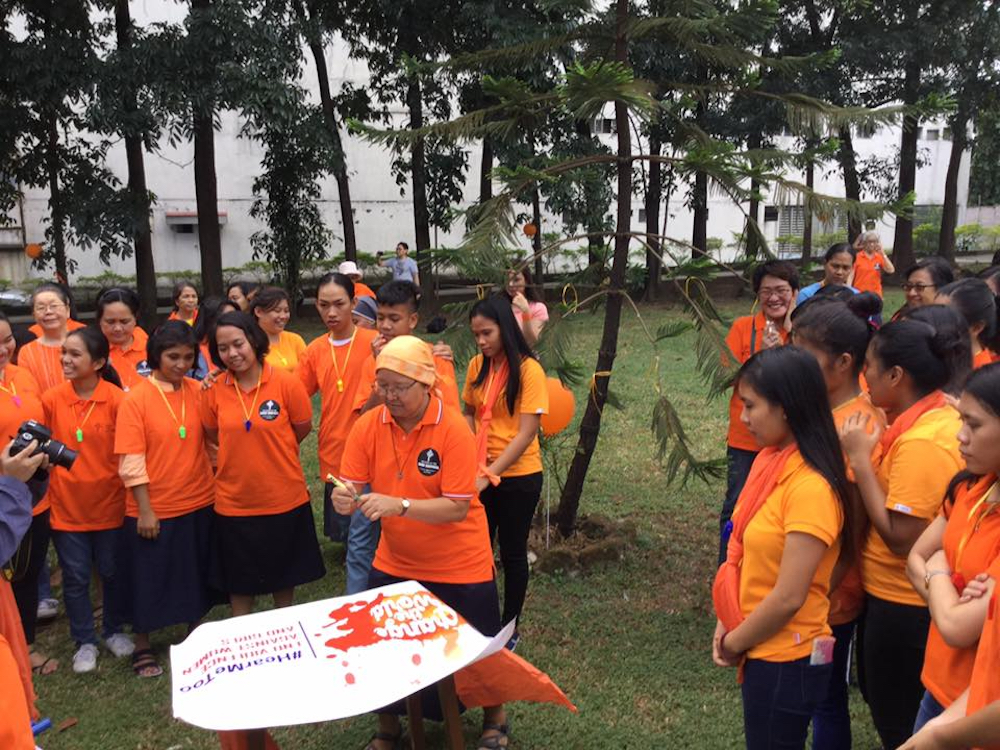 Quezon City, Philippines — Wearing orange on the 25th of every month is a practice followed by a number of sisters and staff of the Religious of the Good Shepherd, Province of the Philippines-Japan. But on Nov. 25, Good Shepherd-run institutions and centers in the Philippines were especially ablaze in orange to commemorate the start of the 18-day anti-violence against women campaign in keeping with the United Nations' "Orange Day" campaign to raise awareness and prevent violence against women and girls.

Sr. Regina Kuizon, province leader, led the signing of the commitment to end violence against women. Among the signatories were the sisters and those who work with them in various apostolates.

Programs were held in three Good Shepherd-run schools as well as centers that cater to women and girls.

Began in 2013, the U.N. campaign picked the 25th of every month as "Orange Your Day" and Nov. 25 as the start of the 16-day campaign. Around the globe, demonstrators came out in support of the campaign. Tear gas was used against people gathered in Madrid, Spain, and Istanbul on Nov. 25. In Tel Aviv, 20,000 people rallied on Dec. 4, while a nationwide strike was observed with many employers allowing workers to participate.

In the Philippines, said Good Shepherd Sr. Añanita Borbon, the awareness campaign lasts for 18 days in keeping with the directive of the Philippine Commission on Women. The Philippine campaign will last from Nov. 25 to Dec. 12.

"One out of four women aged 15-49 [24.4 percent] has experienced physical, sexual or emotional violence committed by their husbands or partners according to the 2019 National Demographic and Health Survey conducted by the Philippine Statistics Authority," the commission said Nov. 24 in a statement. 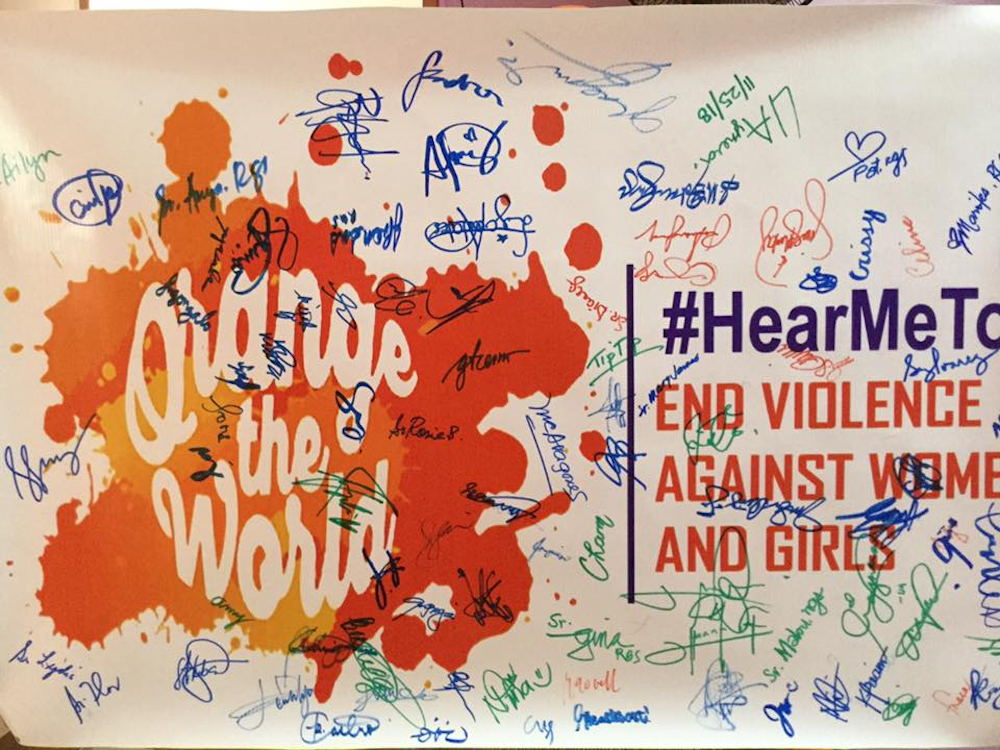 Women's groups, church women among them, have denounced the Philippines' current President Rodrigo Duterte for continually exhibiting misogynist, anti-women tendencies with his pronouncements and actions.

Borbon, a provincial councilor of the Good Shepherd Sisters Philippines-Japan, heads the sisters' Ministry Center located at their main compound in Quezon City, Metro Manila. In the compound besides the Good Shepherd Provincialate are other centers with services for women and girls, among them, the Ruhama Center for trafficked and prostituted women.

The Heart of Mary Villa helps expectant mothers, mostly either unwed or abused, in the adoption process as an option after giving birth or how to move on with their lives as single mothers. The Center for Overseas Workers gives seminars and counseling to foreign-bound overseas Filipino workers and returning ones who are in crisis.

In Cavite, south of Metro Manila, the sisters run Bukid Kabataan (Children's Farm) for abused and former street children. In Davao City in Southern Philippines, the sisters help former women entertainers in Japan, many of whom performed in nightclubs, who had children with their Japanese partners but who returned home after they were abandoned or separated.

So the monthly "Orange Your Day" and the annual 18-day campaign against violence against women come naturally to the Good Shepherd Sisters in the Philippines. "We learned that similar anti-VAW events were held in Good Shepherd missions in Thailand, Indonesia and Malaysia-Singapore," Borbon said. "We want to have bigger groups next time." 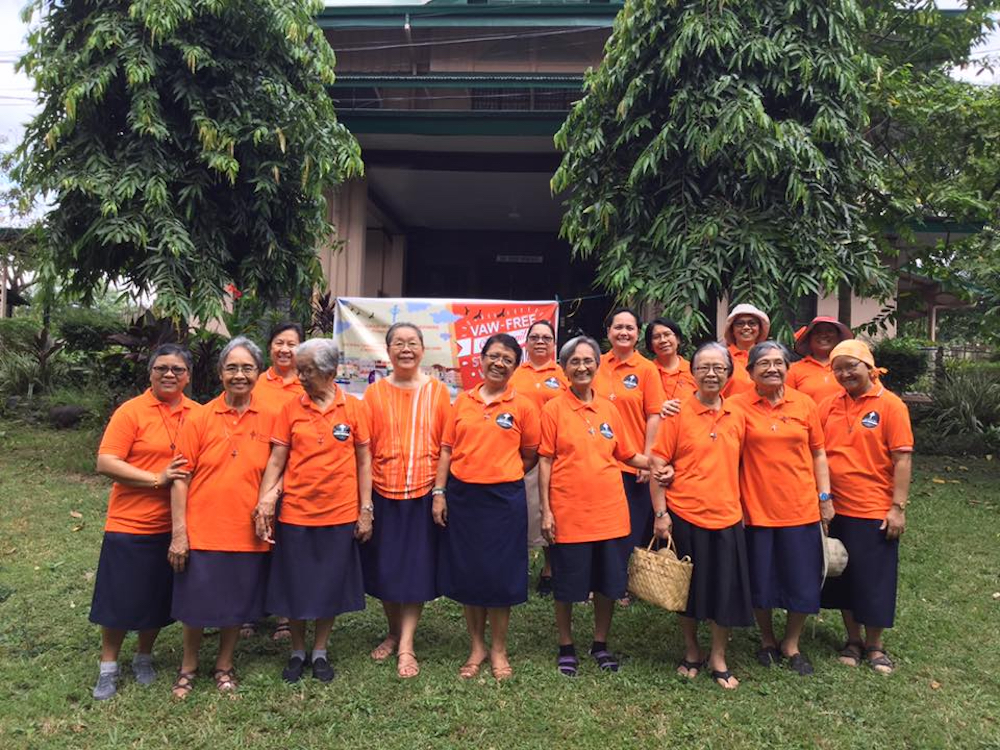 The Association of Major Religious Superiors in the Philippines, comprised of both men and women congregations, has an Office of Women and Gender Concerns that focuses mainly on raising gender awareness especially among religious formators. In May, a letter of support for Sr. Patricia Fox, the Australian missionary who had been the target of a deportation campaign by Duterte, was issued by the association on official letterhead. In that letter, the superiors also took issue with the tenor of violence against women by the Duterte administration, though not mentioning him by name.

Duterte has made anti-women statements, among them, ordering soldiers to shoot women rebels in their vaginas, saying he wished he had been first to rape an Australian missionary when he was mayor and, lately, threatening to slap International Criminal Court prosecutor Fatou Bensouda after he learned that she has started an investigation of the extrajudicial killings in the president's bloody war against drugs.

Duterte said: "And that short lady there, the black, announcing investigation … if I see you I will slap you. Who are you to threaten me?"

Three women have been prominently in the news for Duterte's open hostility toward them. Fox, of the Our Lady of Sion congregation, spent 27 years in the Philippines but was forced to leave; her visa was not renewed and she faced a deportation case against her. Chief Justice of the Supreme Court Maria Lourdes Sereno was impeached in May, and former justice secretary and now Senator Leila de Lima is in prison for alleged drug trafficking.

Filipino women are making plans for Dec. 12, the end of the orange campaign.

The Religious of the Good Shepherd was founded in France by St. Mary Euphrasia Pelletier in 1835 after the French Revolution to serve women and girls in crisis. The sisters have expanded their services to other sectors of society but still have ministries promoting the welfare of women and girls. Numbering about 4,000 (apostolic and contemplative sisters), they are present in 70 countries. The first Good Shepherd Sisters arrived in the Philippines in 1912. There are 22 apostolic and four contemplative Good Shepherd communities in the Philippines with 140-plus Filipino sisters in all.

Prayers for my country: for justice and peace on Republic Day

Hope comes in our inner work