When Angelina Leon Mvungi was 15 years old, she failed the government exams to continue to secondary school in her hometown of Samé, in northern Tanzania. Without the funds to go to a private school, this was effectively the end of her education, because the government exam cannot be retaken. "I was just sitting at home, doing nothing," said Mvungi.

For students who are unable to continue their studies, due to a lack of money for school fees or failing the exam, sitting at home is the most certain path toward teen pregnancy and early marriage. Early forced marriage or pregnancy, often as a result of sexual violence, can also cause girls to drop out of school, even if they had planned on continuing. Almost four out of every 10 girls in Tanzania are married before age 18, according to UNICEF statistics. One quarter of the babies born in Tanzania are born to mothers under age 18, according to U.N. Women.

Unlike many other girls in Tanzania who find themselves out of school at age 15, Mvungi had the support of her father, who encouraged her to find a trade. She decided to study cooking and found the Grail Sisters' Emy Gordon Vocational School in Moshi, Tanzania. Internationally, The Grail is an ecumenical women's lay organization, but in Tanzania they are recognized as a congregation of Catholic sisters.

Between class sessions about making samosas and rice with beef, Mvungi and the other students at the school have a life skills class with an interesting twist.

Sr. Lucy Temba, who leads the class, asks students to choose a picture of an animal that has characteristics similar to their own personalities. Are you a monkey, a talkative leader who makes a lot of noise but also gets others to pay attention? Are you a rabbit, who teases others and then runs away? Are you a giraffe, graceful and quiet, rising above the conflicts?

Life skills courses like these are essential for preparing girls to take control of their lives, both economically and socially. Confidence enables them to stand up against issues such as violence, corruption and "sextortion" ­— or sexual extortion — a term coined by the Tanzania Women Judges Association.

"There is a certain amount of corruption in Tanzania, but some of that corruption is impacting women and girls because it's not money — they're actually asking for sex instead of money," explained Anna Collins-Falk, the Tanzania director of U.N. Women, the United Nations Entity for Gender Equality and the Empowerment of Women. U.N. Women works with governmental and non-governmental organizations to promote gender equality and ensure that other U.N. programs are also implementing initiatives that support women and girls.

Sextortion, said Collins-Falk, is a systematic issue, and one that U.N. Women is spearheading in 2016 with the help of the Tanzanian Women Judges Association. Students have told activists about teachers who threaten to hold them back a year, or refuse to give them their report card or extra tutoring unless they have sex with them. Women have talked about bosses withholding promotions, raises and work benefits, or who threaten termination or to hire only women who will sleep with them.

"It's about recognizing it for the form of violence that it is. It's sexual violence, even though it's consensual," said Collins-Falk. "In the case of children, there's no such thing as consensual sex, so it's rape."

Girls face challenges on almost every front in Tanzania. According to UNICEF, only 24 percent of girls continue to secondary school (7th grade and above). Almost 100 percent of girls attend primary school, but that number drops sharply — to 24 percent — in 7th grade. This is due to lacking school fees, undergoing social pressure to help out at home, failing the exam, or living too far away from the few public secondary schools.

Sisters across Tanzania are running vocational training schools, such as the Emy Gordon School, because they know that getting girls excited about learning a skill is the best way to combat consensual early marriage and teen pregnancy.

The sisters teach girls trades such as cooking, embroidery, tailoring and agriculture. These sectors give them an alternative to sitting at home with no job, and are also conducive to the girls' starting their own businesses. But the sisters are also focusing on life skills in addition to the practical trades: pursuits such as confidence building, self-identity workshops, leadership, entrepreneurship and understanding their local community.

These skills are essential to help young girls navigate the world as they try to make money without falling victim to sextortion.

"We have a session concerning job seeking, where they discuss and give their ideas," said Temba. "We teach them how to say 'no' if they see corruption, because sextortion is corruption."

Activists committed to helping young women need to train them to recognize when a situation is sextortion. They also must educate men and people in positions of power that it is illegal to ask for sex in exchange for services. The difficulty lies in the fact that technically this is consensual sex, since the girl agrees to have sex in exchange for something. The important factor to look for is psychological coercion of someone in a vulnerable position by someone in a position of power.

The U.N. is working with partners to educate people about sextortion, including training police officers at the Gender and Children's Desk how to recognize sextortion complaints. The Tanzania Women Judges Association also developed a toolkit for law enforcement officers, judges and law students to deal effectively with the issue in a legal setting, though few women actually report the crime.

But recognizing sextortion is only the first step. The girls and women must also have the confidence to say no. And that confidence is exactly what the life skills classes are trying to impart.

Adabert Chenche, 29, is the life skills and entrepreneurship teacher at the Evangelizing Sisters of Mary's Bishop Mazzoldi School near Bagamoyo. The school is located in the coastal region of Tanzania, which is majority Muslim, and many of the students at the school are Muslim.

"We teach self-identification, motivation and inspiration, self esteem, and also constructing their own story," Chenche said. "This is writing the story of their life, saying 'I want to do this and this by this time,' in order to set their own goals."

"We also try to teach them self-awareness, and that when you get married at a young age, you're not aware of what else is out there," he added. "When they're here, they become aware. They won't agree to be a second or third wife [polygamy is prevalent in majority Muslim areas]. What forces them to marry is poverty. If they have their own store, they won't need to do this."

Since the best way out of extreme poverty for women is to become self-employed, Chenche helps the 15 students in the tailoring program envision what it would be like to have their own small tailoring business. "I teach them how to recognize business opportunities," he explained. "I teach them to look at the environment, and say OK, we have this and this, so let's introduce this, which will benefit everyone and also bring me an opportunity."

Girls in Tanzania are used to hearing "no" — no money for school, no choice about who or when to marry, no control over when or if to have children. So for many, the thought of telling themselves, "Yes, I can start my own business," is terrifying, even if they have the skills, Chenche said. Chenche's job is to help girls overcome that fear, to understand that they are capable. Part of that is standing up for their sexual rights, and learning how to deal with sextortion.

U.N. Women also hopes Catholic sisters across the country will join them in their campaign to unmask sextortion. "The sisters get so very close to the community, they are trusted and respected, so they have a huge impact," said Collins-Falk. "They must use this also to change the status quo, because the gender roles and the gender relations might be traditional, but traditions change. There is a need to challenge those [traditions], especially in the context of the amount of violence against women and girls that we see. The discrimination and violence is horrendous, and I'm sure they know what's going on because they see it probably every day."

For the Grail Sisters in northern Tanzania, empowering women is part of their charism, a spiritual calling to education. "In order to be active in society you need to be educated," explained Sr. Imelda Gaurwa, 76, who was the first Tanzanian Grail Sister. "It's everyone's responsibility to transform the society, and that means everything, spiritually and socially," she said. "Women have realized that if we don't share and speak out, no one will do it for us."

Mvungi, now in her second year at the Emy Gordon School, has perfected her chicken and fries recipe, and she is thinking about opening her own business after she graduates.

"I gained confidence because I am doing something that I know, and I know people will like it," she said. Mvungi added that she found it difficult to talk to strangers before starting the course, but the classes are challenging her to interact with potential customers. "We're also learning to be confident," she said. "If you're not confident, you can't do anything." 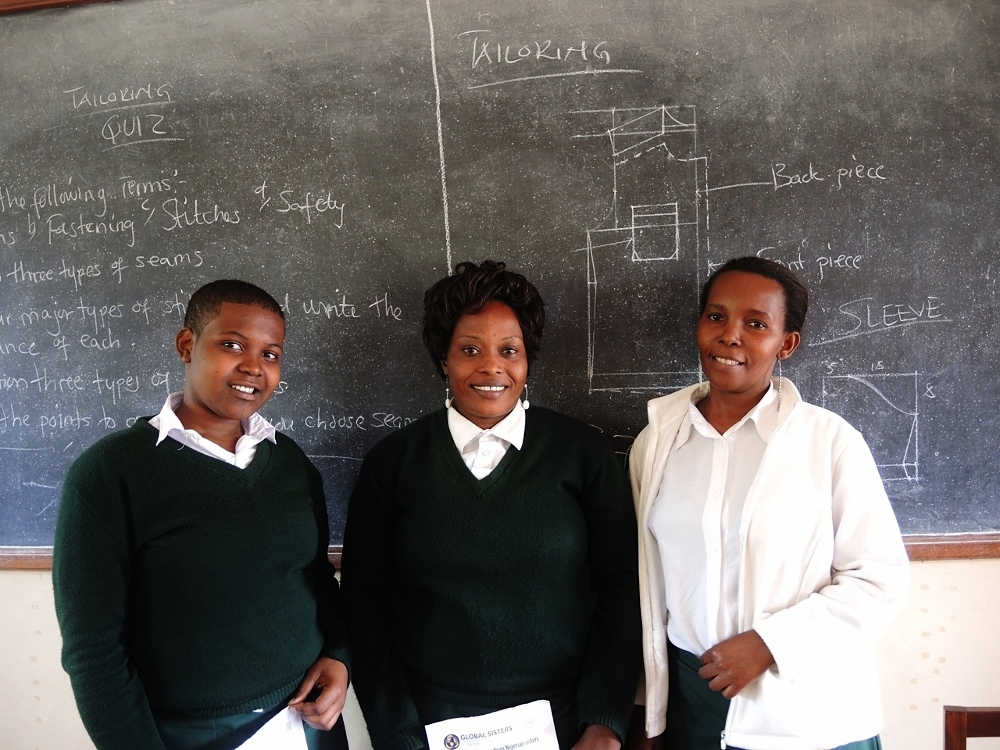 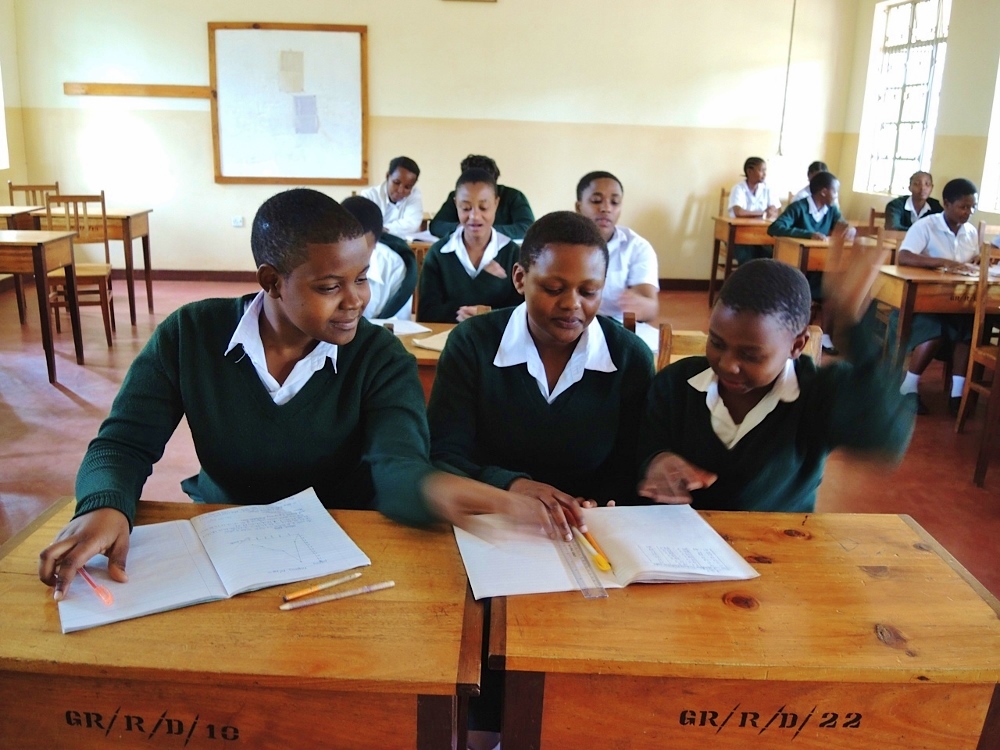 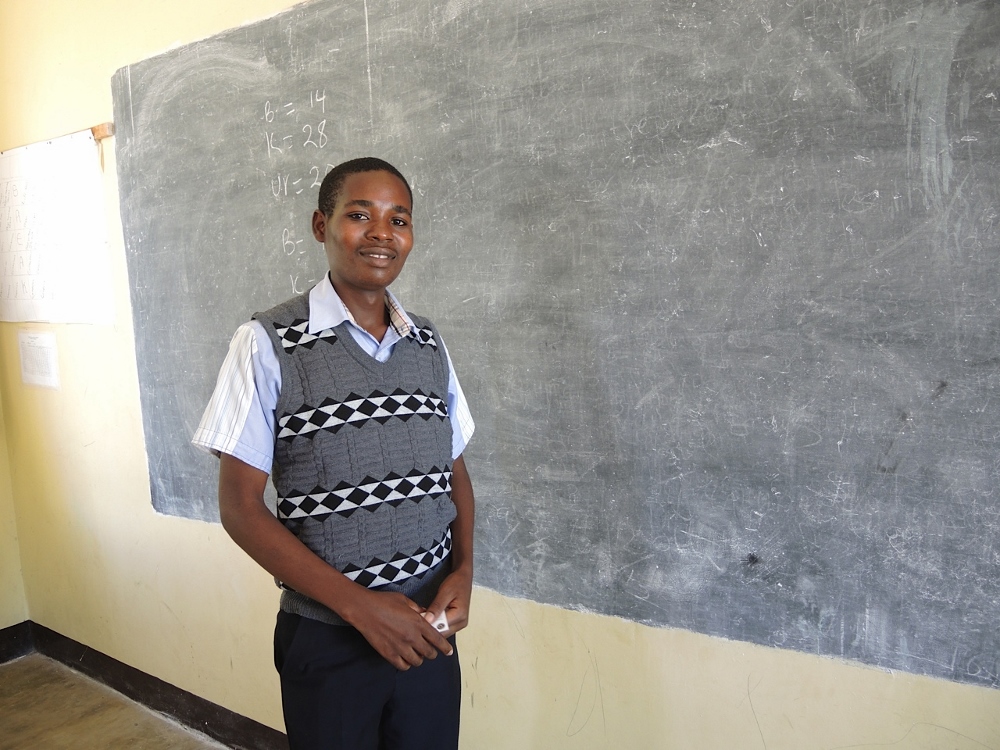 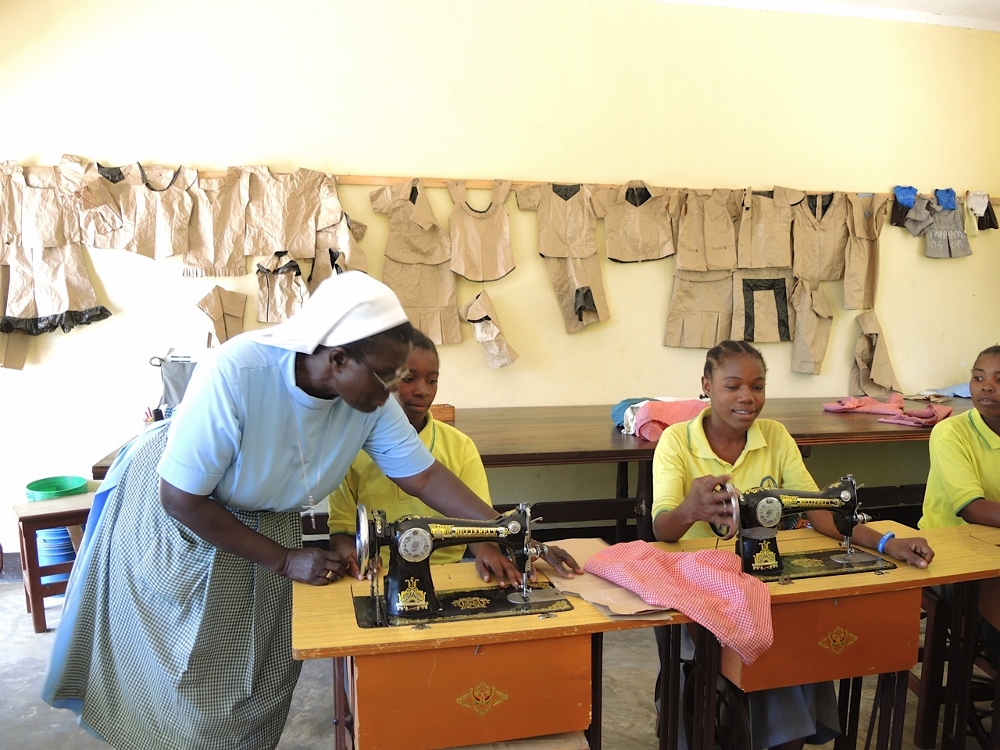 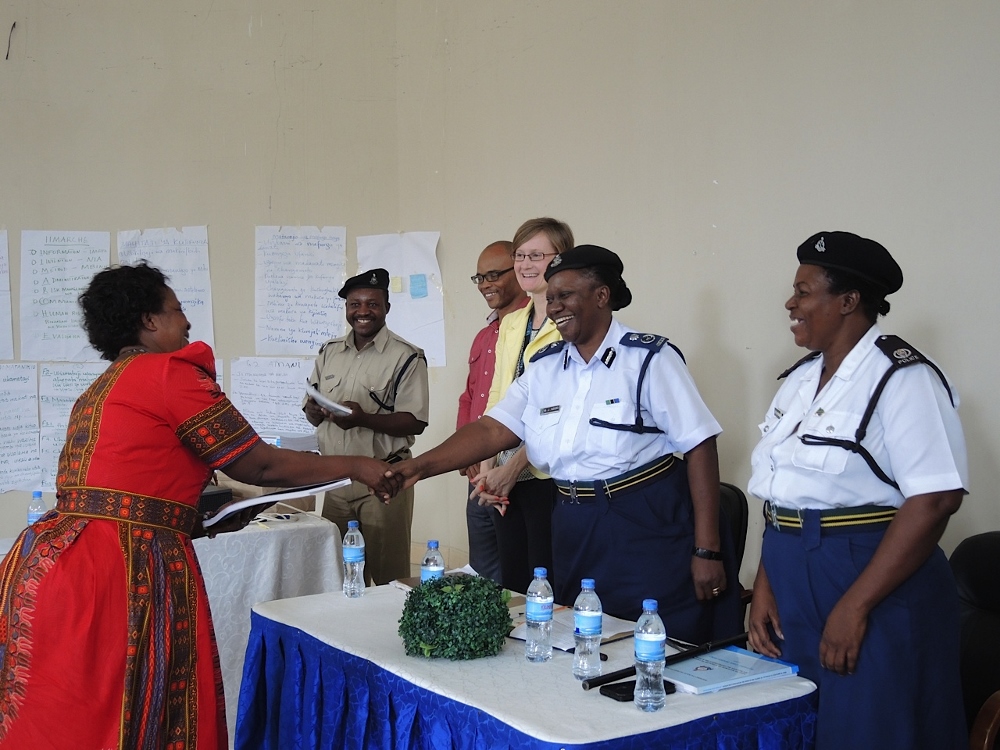 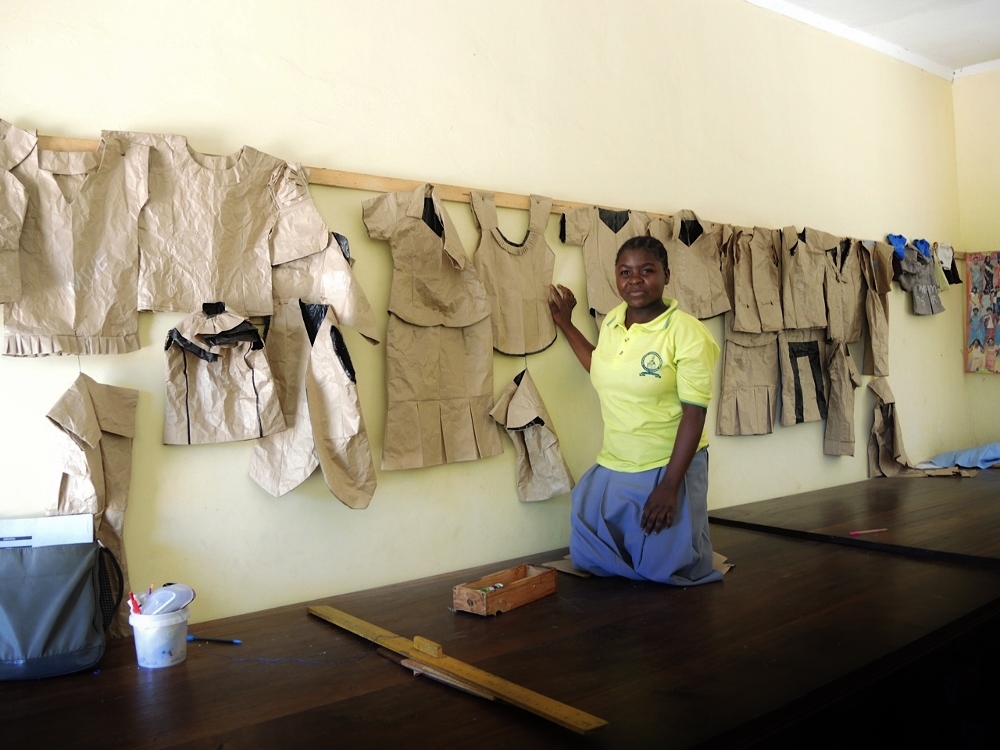