Catholic women religious at the United Nations are decrying the use of apparent use of chemical weapons by Syria against civilians, including children, while warning that the airstrikes carried out April 14 by the United States and some of its allies in response could bring more retaliation.

"We have to send a message that the use of chemical weapons is not acceptable," Sr. Margaret O'Dwyer, one of two representatives of the Company of the Daughters of Charity at the United Nations, told GSR in an interview just hours before the strike and in email exchanges afterwards. In the wake of the airstrikes, she said, "let's pray for the Syrian people, for anyone injured or killed, and that the source of chemical weapons production was destroyed. Also that the bombing deters further chemical weapons use and that it does not ignite a greater war."

She and other Catholic sisters said they did not support the airstrikes and advocated for diplomatic approaches to resolving the conflict in Syria. "What we can do is negotiate for a cease fire, with much support in enforcing it," she added. "While a cease fire is negotiated, nations could work at getting in humanitarian aid — medical care, food, etc. — and aiding and accepting refugees."

O'Dwyer's humanitarian concerns are shared by other sisters representing their congregations at the United Nations where, on April 14, the U.N. Security Council voted down a resolution by Russia, an ally of the Syrian government, to condemn the attacks by forces of the United States, France and the United Kingdom.

The Russian ambassador to the United Nations, Vasily Nebenzia, quoted by The New York Times, said, "The United States and its allies continue to demonstrate blatant disregard for international law."

Calling the missile attacks "aggression against a sovereign state," Nebenzia said the U.S., France and the United Kingdom had not proven their case that the Syrian government, led by President Bashar al-Assad, had launched a chemical weapon attack against Syrian civilians.

Nikki Haley, the U.S. representative at the United Nations, also quoted by the Times, called the U.S.-led attacks "justified, legitimate and proportionate," saying the action had been "to deter the future use of chemical weapons by holding the Syrian regime responsible for its atrocities against humanity."

Sr. Janet Kinney, a member of the Sisters of St. Joseph of Brentwood, New York, and the executive director of the Partnership for Global Justice, a U.N-based advocacy group, said in an email to GSR on April 14 that, "violence is not a solution, but typically begets more violence."

"They are speaking about this action as 'precision strikes' but does anyone really think this military show of force will stop Assad?" she said.

"It is more than ironic that President Trump indicates he took action on behalf of these innocent victims, yet only a week or so ago he spoke about removing troops from Syria, which seems less than supportive of protecting these innocent victims. Not to mention his policies about immigration and accepting the Syrian people onto U.S. soil. Does anyone see the contradiction?"

Kinney added, "Anyone that thinks these precision strikes will act as a deterrent here is seriously mistaken. Increasingly we as a nation seem to have lost all sense of taking 'diplomatic action' — working with other nations towards brokering peace as opposed to this action, which unfortunately was also supported and coordinated with the United Kingdom and France."

Kinney and Maryknoll Sr. Marvie Misolas, the new representative of the Maryknoll Office for Global Concerns at the U.N., had warned in a joint interview with GSR on April 12 of the dangers of escalating tensions in Syria and the Middle East.

"We can't solve the problem of violence in Syria with more violence," said Misolas, who is from the Philippines. "We can and should create a space [at the U.N.] where leaders can talk together."

"I hold firm about my view of non-violence, we cannot solve violence with another violence.  There has to be another path  to convince the Assad and his government to a peaceful way out of this war," she said, adding that she is praying for a dialogue with the Assad government and of the possibility that Pope Francis might "try to broker peace."

Kinney, calling the apparent use of chemical weapons "horrific," said she, too, was worried that diplomacy no longer seemed to be a priority in Syria and that the use of military force will ultimately cause more problems in the war-torn country. Kinney criticized what she called "this bullying, omnipresent kind of thinking."

In his remarks before the Security Council on April 14, U.N. Secretary-General António Guterres said that the war in Syria "today represents the most serious threat to international peace and security," adding, "We see confrontations and proxy wars involving several national armies, a number of armed opposition groups, many national and international militia, foreign fighters from everywhere in the world, and various terrorist organizations."

Guterres said that for "eight long years, the people of Syria have endured suffering upon suffering."

"Syrians have lived through a litany of horrors: atrocity crimes, sieges, starvation, indiscriminate attacks against civilians and civilian infrastructure, the use of chemical weapons, forced displacement, sexual violence, torture, detention and enforced disappearances. The list goes on."

He added, "There is no military solution to the crisis. The solution must be political." 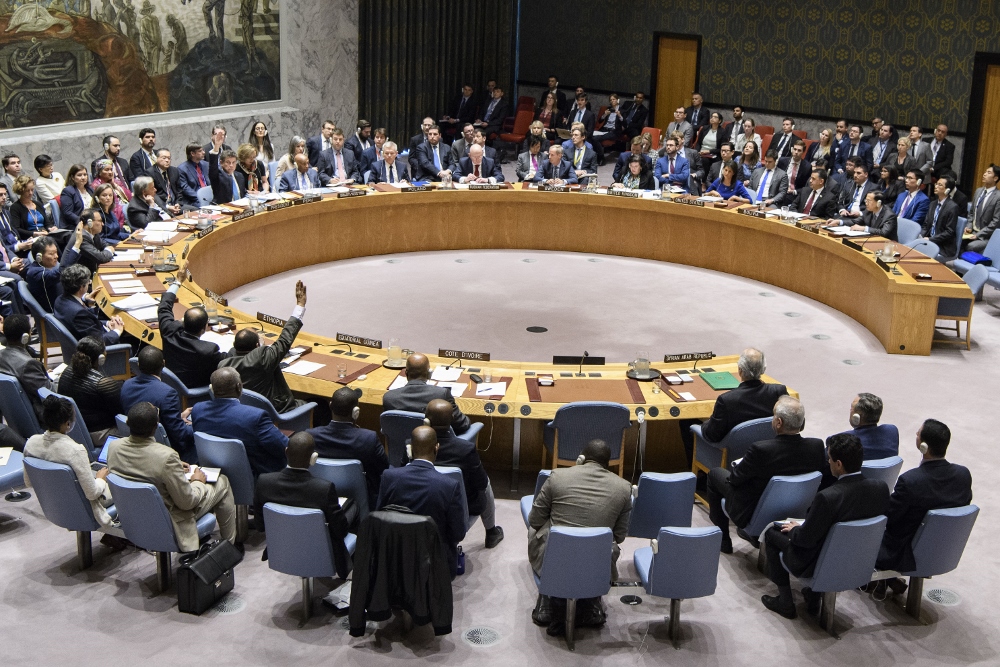