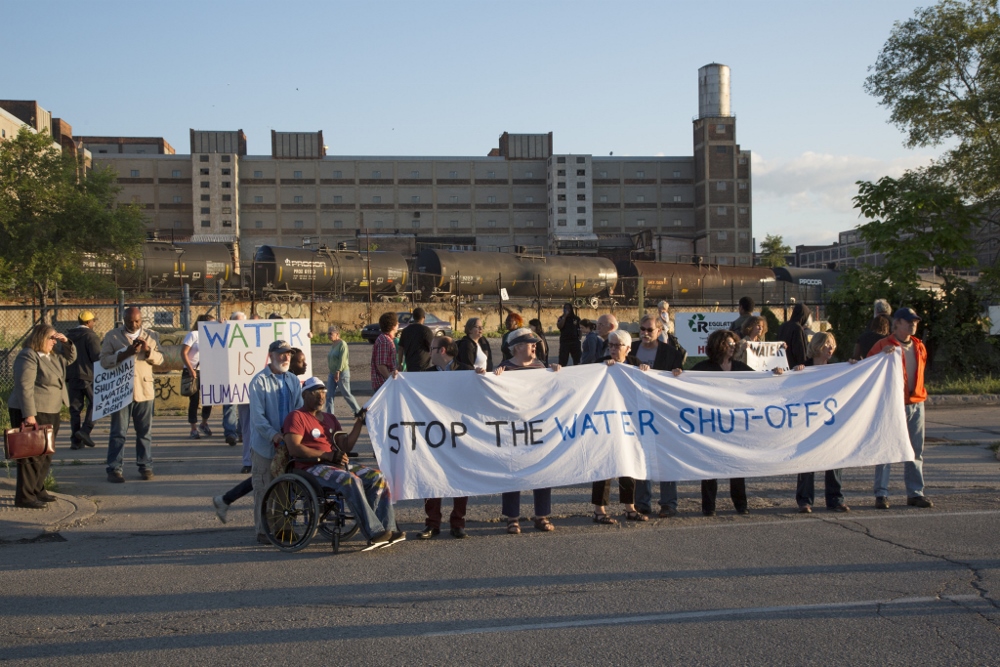 Activists line up outside of the Russell Industrial Center, where the Homrich company is housed, to protest Detroit's water shut-offs for customers who owe too much money on their accounts. Sr. Mary Ellen Howard (fourth from left) joined pastors, journalists and community activists in blocking Homrich trucks from going to shut off water mains. (Jim West)

Detroit, Michigan — A Catholic sister has added her voice to those protesting Detroit’s aggressive campaign to shut off water to thousands of households in arrears on their water bills. For Sister of Mercy Mary Ellen Howard, the fight here is elemental. “Water is life,” she said, “when you shut off water, you shut off life.”

Howard, a Detroit native, was one of 10 religious leaders and community activists arrested July 10 while blockading the entrance to Homrich Wrecking Inc., a private company contracted by the city to do residential shut-offs. As picketers chanted, “No water flow, no trucks go,” Howard and her group stood in front of a gate with  a large banner that read, “Stop the Shut-offs,”  impeding pick-up trucks about to depart for a morning shift of turning off water mains. Charged with disorderly conduct, the religious leaders and community activists were held for a few hours at a nearby detention facility then released on a $100 bail.

It was the first arrest for the 71-year-old sister. A former chief executive officer of two hospitals, Howard worked for the past 19 years as executive director of Cabrini Clinic, a health clinic for the poor and uninsured. Her recent retirement, she said, has freed her to speak out on what has become one of the most contentious issues in Detroit’s bankruptcy proceedings.

Over the past year, the Detroit Water and Sewerage Department has shut off water to more than 40,000 households. The crackdown, which targets residents who are two months behind on their bill or who owe at least $150, is part of the city’s plan to reduce its $18 billion debt. One-third of that debt, $5.7 billion, much of it associated with bonds, is carried by the water department.

The strategy has generated criticism from the United Nations and water rights activists, as well as Detroit residents, many of whom testified at the July bankruptcy hearings about hardships caused by the water termination program.

Critics say the shut-offs, as implemented, violate the basic human right of access to clean water, unduly burden the city’s poorest with the task of debt reduction, and could lead to a public health crisis. Several thousand people rallied in downtown Detroit July 18 to protest the shut-offs. Earlier in the day, two dozen demonstrators convened at the gate of Homrich Wrecking, where nine people were ultimately arrested in another blockade. 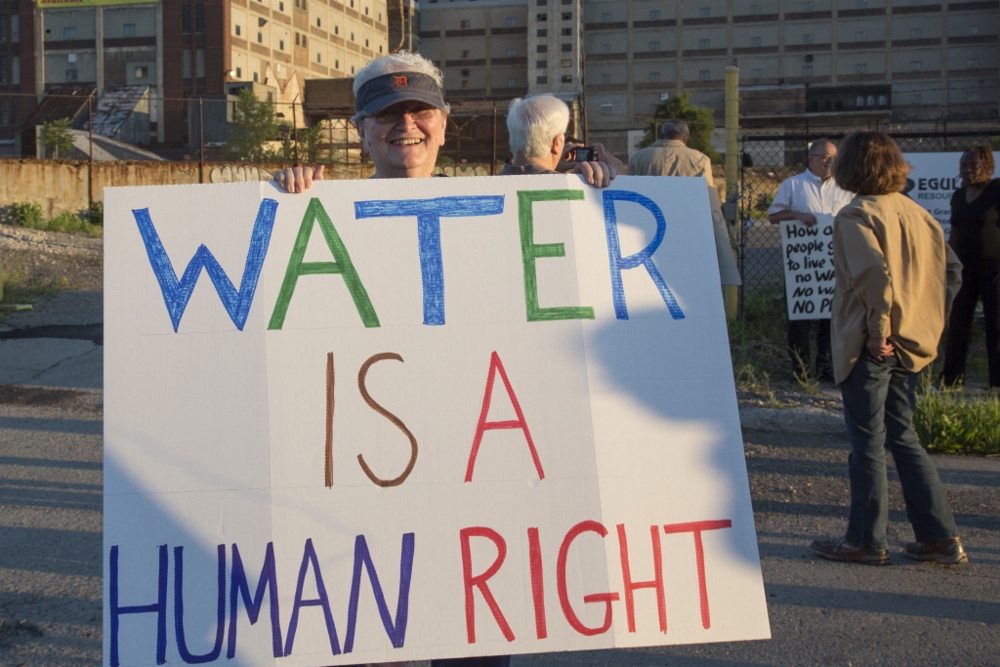 Sr. Mary Ellen Howard was among protesters who want the City of Detroit to reconsider its water shut offs. (Jim West)

“Why is it an embarrassment? Because people are putting a lot at risk. I think the pressure we have put on the city is a good thing. We are not going to stop,” said Howard, who is actively involved with the Detroit People’s Water Board, a local coalition advocating for water access.

According to Ann Ralls of the Michigan Welfare Rights Organization, an advocacy group for the poor, water shut-offs are a common occurrence in Detroit, where water affordability has been a problem for a number of years. As Detroit’s population dwindled, water rates escalated, making the cost of water prohibitively high for its remaining poor residents. Thirty-eight percent of Detroiters live in poverty and the official unemployment rate – 14 percent – is more than twice the national average.

But the water shut-offs have “never been on this scale.” Ralls said. “Trucks were literally going down and shutting off water to entire blocks.” She said her organization believes the water department’s “brutal” policy is “being implemented to drive poor people out of Detroit. “

The escalation began a year ago when the city came under the governance of Orr, the emergency manager. Between August and October 2013, nearly 10,000 households had their water turned off. After a winter lull, the water department resumed its shut-off program, announcing in the spring that it would begin terminating water service for delinquent accounts at a rate of 1,500 to 3,000 customers per week. To have the water turned back on, customers must pay one-third of their outstanding balance and agree to a payment plan that attached a percentage of their remaining debt to their monthly water bill.

“It often meant paying $100 a month for water, which is impossible for many Detroiters,” Ralls said.

Howard, who sits on the board of directors for 10 organizations, said she had been aware of the city’s water crisis for some time and was hearing stories that “horrified” her:  At a breakfast for indigent mothers, women reported having no water for baby formula. A social worker told of children coming to school dirty because they could not bathe. Howard said she saw evidence of the shut-offs in her own neighborhood, which is located in an impoverished area of Detroit’s east side. For a year, she and her housemate, Sister of Mercy Canice Johnson, washed clothes for a family of five because they had no water in their house. 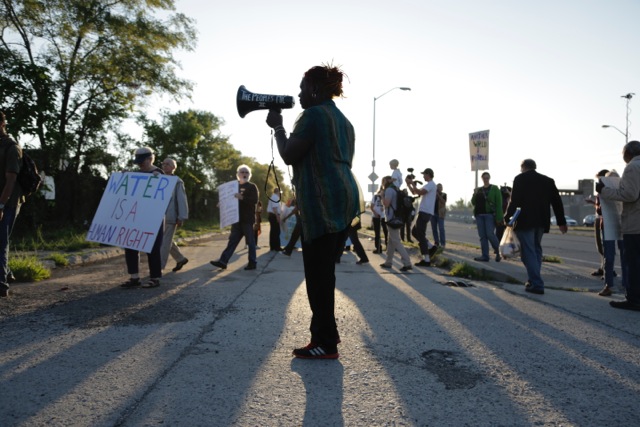 “If people can pay [their water bill], they should pay. I don’t have a problem with that. But I must say, those who did pay, probably won’t be able to pay their rent that month,” Howard said. Like many Detroiters, she wondered why the water department did not go after the commercial and industrial accounts that are also in arrears.

Prior to the moratorium, the water department described its bill collection strategy as effective. Department spokespeople reported customers were paying up and revenues increasing. Of the 7,210 shut-offs in June, 3,118 were turned back on, according to the water department.

“We had to do something,” Cheryl Porter, the department’s chief operating officer, told city residents at a neighborhood meeting before the moratorium was announced.

The water department’s financial woes are significant. Because of years of lax or ineffective collection practices, 83,000 residential accounts, a little less than half, and 55 percent of the city’s commercial and industrial accounts, are delinquent. Its aging infrastructure badly needs an upgrade, but state and federal funds allotted for such projects are down. Debt service consumes 45 percent of the department’s annual budget.

As the shut-offs ramped up this summer, so too the public furor against a policy many described as merciless and incompetently administered.  The water department apparently offered no exemptions for the infirmed or households with small children. Grievances listed in a June report to the U.N. Special Rapporteur on the human right to safe drinking water and sanitation, submitted by Canadian water rights activist Maude Barlow, included: families going months without water; shut-offs happening without notification; administrative barriers for those who had paid on their bill and were waiting for the water to be turned on; inaccurate billing, and a required payment of 30 percent of the amount owed,  in some cases thousands of dollars, before the  water was turned on. 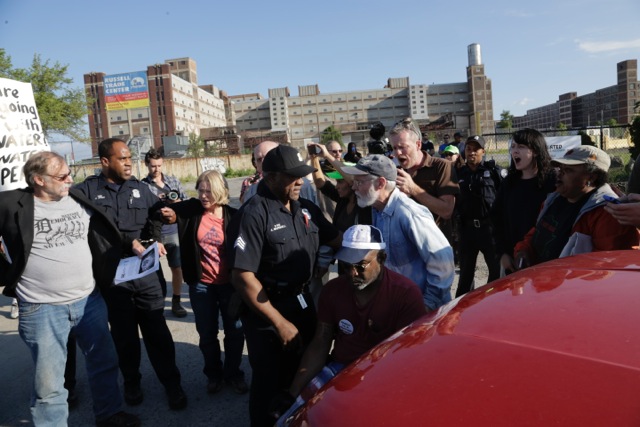 “The city is in shambles. They have no systems. They did not send notices. They lie. They just stand up and lie on television. They say there is assistance to help when there isn’t,” said Howard, who later added that she was once erroneously charged $3,000 on a home water bill. “I can’t tell you what I went through to get it fixed, and the poor don’t have the resources I do.”

In early July, the water department announced a fund of $1 million to assist residents struggling with payment, but this notification came several months after an acceleration of shut-offs. It was the department’s lack of a robust assistance program that prompted bankruptcy judge Stephen Rhodes to order the water department to fix its bill collection strategy. Since announcing the suspension of the shut-offs, the water department is no longer accepting applicants for its assistance fund and is going after customers accused of illegally turning on their water, Ralls reported.

Hovering over Detroit’s water war is the shadow of privatization. The city’s proximity to the Great Lakes, where 20 percent of the world’s freshwater is stored, makes the water department, even with its liabilities, one of Detroit’s best assets. “It’s worth billions.” Howard said. “The creditors want the city to sell their assets to get their bills paid. In a bankruptcy, that is how it works.”

The water department’s financial future has been in confidential mediation since April. According to Thomas Stephens, an attorney who works for the city, 41 companies have reportedly made bids on Detroit’s water. What the bids mean is unclear, he said. Stephens anticipates a public-private partnership. 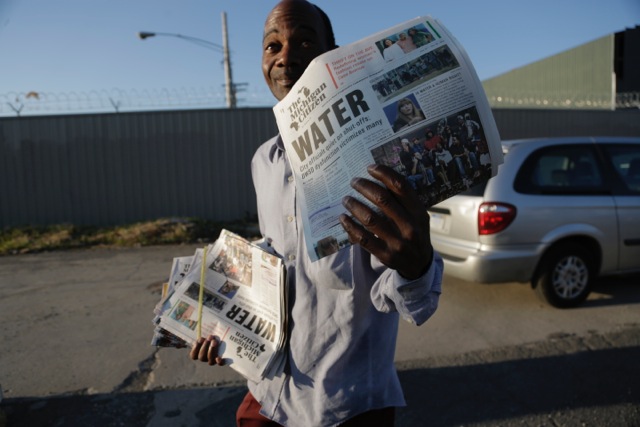 A man holds up a newspaper with headlines about the Detroit water shut offs. (Stephen McGee)

“Amid the mediation, they are trying to increase the value of the department by reducing the debt from residential bills in arrears, Stephens said. It’s treating the poor of Detroit solely as bad debts and not as human beings.”

Fearing a future of privatized water, Howard said she is fighting now to keep water as a public resource for the common.

That fight got a little physical during the July 10 protest at the Homrich gate when police shoved and yanked two female protesters they had just handcuffed. Attending the demonstration that day was Howard’s housemate, Canice Johnson. Asked if she was worried about her friend who had just been carted off into a police car, the 80-year-old nun teared up a bit and said quietly, “Yes. She does have diabetes, you know. So I hope they will give her some food. She mostly needs water.”

[Claire Schaeffer-Duffy is a longtime NCR contributor who lives and works at the Sts. Francis and Therese Catholic Worker Community in Worcester, Mass.]

Q & A with Sr. Ruth Schönenberger: 'It is time to act' for women's equality in the church

Nuns on the Bus 2016: A revolution of the heart