Skip to main content
This story appears in the Francis in the United States feature series. View the full series.

Were you not, like me, proud the first five U.S. citizens Pope Francis greeted as he stepped off his Alitalia flight from Havana were African-American?

On U.S. soil for the first time, the pope met President Barack Obama; his wife, Michelle; their daughters, Malia and Sasha; and Michelle's mother, Marian Robinson.

How society has changed. The last recorded U.S. lynching of an African-American took place in 1968, a mere 47 years ago.

After the Obamas, Francis met his first U.S. Catholics on U.S. soil, Vice President Joseph Biden and his wife, Jill.

It was a good-feeling moment.

But then, my high spirits took a turn. I caught a glimpse of the official Catholic welcoming line. Thirty feet, at least, of clerics, bishops all, dressed in robes, sashes blowing in the wind.

As symbols speak, they said U.S. society had changed, but our church had not.

What were our bishops thinking?

Hierarchy, of course. A church of and by the bishops. A sense of church protocol that allows no room for "outsiders" — meaning the Catholic laity, the 99.9 percent, the rest of us.

Going through my mind was the thought: They just don't get it. Shame on them.

Moments later, Francis lifted my sagging and disgruntled spirits as he stepped into a small, black car, a four-door Fiat 500. His messages: simplicity, humility, concern for resources and environment.

NBC newsman Brian Williams, newly returned to TV, remarked: "It's a Mr. Bean of a car."

How can you not just want to hug this man?

I wish I knew if the reception blunder was the work of the U.S., Vatican handlers, or possibly Francis himself. An answer to this question could offer a glimpse into the eventual success of the Francis papacy itself.

Perhaps the single most important question of the Francis pontificate is how receptive or deaf he will be to the cries of women around the world who daily feel the effects of discrimination based solely on having been born a woman. In many parts of the world, this translates into hunger and a denial of education for billions of women and children.

Admittedly, my thoughts were influenced by the three days I had just spent with some 500 women who had gathered in Philadelphia to draw attention to the plight of women everywhere.

They came together as Catholics, as believers who care deeply about bringing justice to communities wherever they can, not for the sake of some abstract principle, but rather to offer comfort and protection to powerless and voiceless billions. The Sept. 18-20 gathering was co-sponsored by Women's Ordination Worldwide (WOW) and Women's Ordination Conference (WOC), two organizations that attempt to shake their church and wider society out of complacency.

The women who gathered in Philadelphia are among the best in our church — and they came from more than a dozen nations. They are capable, intelligent and caring women.

To the last, these women carry histories of generosity and concern for other, particularly the weak and excluded.

Some might falsely think their agenda was all about gaining power for its own sake, to somehow take control of this church of ours. These people are miles off the mark.

The women gathered, not accidentally, in Philadelphia just one week before Francis was set to step foot into the city. The message they hoped to deliver to Francis and beyond was this: Discrimination in every form is wrong. Discrimination against women within the Catholic church undercuts its very mission: the preaching of the inclusive word of God.

By almost every contemporary feminist measure, the WOW/WOC talks and workshops were mainstream. By Catholic institutional measures, what the women had to say sadly continues to be radical. Therein is the challenge to every Catholic parent trying to offer his or her son or daughter reasons to continue to call the church their home after they leave parental embraces. A recent Pew forum survey found that U.S. Catholicism loses more members than it gains at a higher rate than any other denomination, with nearly 13 percent of all Americans describing themselves as "former Catholics."

I could not help but think it is a shame that Francis will not have time to spend with some of the women who gathered in Philadelphia. They have so much to share with him.

The WOW/WOC organizations are led by competent women. They drew the women together under a conference banner of "Gender, Gospel and Global Justice." While the women's ordination movement today is led mostly by younger laywomen, it has been energized for decades by women religious. So it was not surprising that many women religious attended the gathering.

I enjoyed the time I spent with Catholic sisters I have known for many years, including Srs. Nancy Sylvester, Carol Coston, Jeannine Gramick, Maureen Fiedler, Christine Schenk and, of course, Theresa Kane. To trace the work of these women is to trace the best of post-Vatican II thought and mission. If Jesus were walking on U.S. soil today, as Francis is, he would quickly gather these six women as half of his apostles.

As Catholics, we are hopeful people. The women in Philadelphia were filled with both joy and hope. Nothing will deter them. No one will ever silence their voices as they demand inclusive church leadership. Of this, we can be assured.

Meanwhile, we know Francis to be a pope of surprises. I am ready to be surprised. He embodies the Gospels, and the Gospels don't distinguish by gender. They celebrate inclusivity, charity, justice and mercy.

[Thomas C. Fox is director of Global Sisters Report. His email address is tfox@ncronline.org and you can follow him on Twitter @NCRTomFox.] 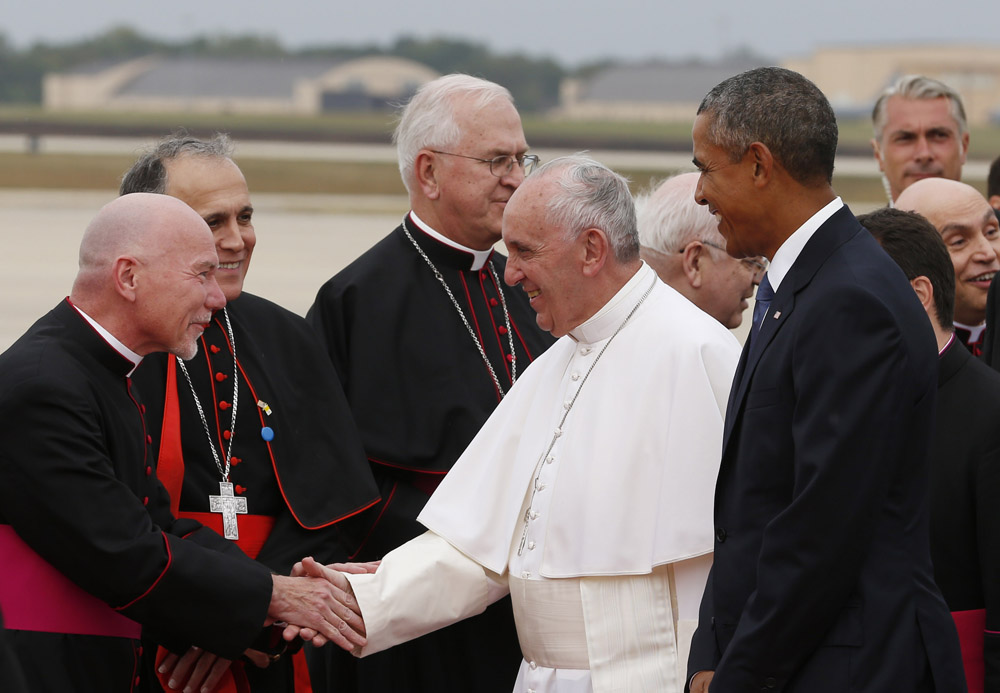