Her early spirituality shaped in high school by the Sisters of Loretto and her world views molded in the Philippines as a missioner, Maryknoll Sr. Mary Grenough could well be a poster child for a generation of U.S. religious women radicalized in the wake of Vatican II.

These women have been as persistent as they have been faithful to their religious callings, many for more than six decades. Grenough is one of nine in her Maryknoll entrance class still in active ministry.

She turns a young 82 today, having served nearly 40 years in the Philippines; 10 in Burma (Myanmar).

Grenough told me in an interview in Yangon, Burma, earlier this year that she decided she had one more move left in her, leaving the Philippines for Burma in 2005 after hearing how the HIV/AIDS epidemic was spreading there while little was being done to combat it by the Burmese government or by non-government groups. As in other parts of Asia and elsewhere at the time, it was still very much a taboo topic. She set out to change minds and build awareness much needed to teach prevention and provide care.

Once settled in Burma, Grenough contacted a British nonprofit organization, Strategies for Hope, which had been promoting HIV/AIDS awareness and teaching practical actions necessary to combat the disease. She wrote, requesting permission to translate materials into Burmese.

“I felt that we needed to educate our church, not only about human sexuality and HIV/AIDS, but about the need for us, as Christians, to reach out and serve the neediest and rejected persons in society.”

Grenough then helped form the Yangon-based Myanmar Catholic HIV/AIDS Network, a small resource limited team that would work together to reduce HIV/AIDS stigma while increasing awareness, prevention and care.

She’s traveled an arduous and crooked road. Foreign Catholic religious must live under the radar in this Buddhist country run by hard-headed generals. Only the politically and socially astute stand a chance to move their agendas forward in either the church or wider society.

One of Grenough’s latest education efforts has involved the writing and publishing of a manual, “Call to Me,” aimed at examining HIV/AIDS from various biblical based perspectives: sexuality, sex, health, healing, discrimination, grief, death, and gender violence. She’s received modest financial support from Catholic Relief Services and CAFOD, the British Catholic aid agency, to print 1,000 copies.

“We hope this material will encourage parishes, dioceses and individuals to start peer support programs, and generate a wider church response,” she explained.

It was in 1956 at the age of 23 the adventurous Grenough first joined Maryknoll. Six years later, at age 30, she was off to the Philippines where her views on mission work, like many of her colleagues at the time, would morph as she came into increased contact with the poor. Like so many others, she went to convert and ended up converted, largely by applying the Vatican II mission documents then spreading throughout the church.

Grenough at first worked in a Manila hospital, but asked to work in the rural Philippines. Her request eventually granted, she moved to the central Philippines and landed on an island where sugar cane was the main crop and industry. Again, she found herself in a hospital run by her order, but it was largely supported by a wealthy Philippine sugar cane producing family and was providing health care to the company’s full time workers.

Class divisions became quickly evident. The sugar cane cutters, among the poorest of the Philippines, eked out barely livable wages and were allowed hospital care only when surplus beds were available.

Grenough’s radicalization story was told by the late NCR Latin America Correspondent Penny Lernoux, in her book, Hearts on Fire: The Story of the Maryknoll Sisters. In Lernoux’s account Grenough, moved by the needs of the poor she encountered, eventually broke rank with the ruling class, until then which had worked seamlessly with the Catholic church for decades.

In 1971, much to the consternation of her local religious community, she helped striking sugar cane workers. When ordered to back down, she refused; she could not do so in good conscience. Eventually Grenough helped change the thinking of her community, which stood by her after the company owner demanded she end her support efforts.

It was a time missioners were slipping into their church’s “preferential option for the poor.” Those options were not out of text books, but took place in community after community on the ground in taxing circumstances. Grenough led efforts to move Maryknoll women religious out of more traditional hospitals and into the barrios where they practiced health care that emphasized preventive medicine. It was a way of providing affordable health care to the needy.

As Grenough once related: “In the beginning I certainly had a sense of poverty, because the hospital we worked in Negros Occidental was owned by the Victorias Milling Company and it was primarily for the workers in the mill. But we would occasionally have sugar field workers and children there, and I could certainly see the poverty in these people. But my life at that time was mostly within the hospital compound, and I did not have an analysis of why people were poor.”

She continued: “I thought it was very wrong of us not to find someway to work outside the hospital instead of just admitting dying babies, children and adults for expensive and usually futile emergency care. If our patients did survive the family was usually in debt for years and perhaps forever.”

The analysis Grenough came to realize she needed would soon be available to her as she encountered priests and others radicalized by the latest iterations of the social teachings of the church, exploding after Vatican II in mission orders. “That’s when I began to see clearly the face of poverty in the Philippines,” she said.

The cane cutters were among the poorest of the poor in the Philippines. They lacked health care. Their work was seasonal. They were often forced to borrow for months each year, leading many to remain in nearly perpetual debt, essentially slaves to wealthier Filipinos.

She told an interviewer: “I remember I spent one week working with the women in the field. I did that with a group of seminarians who had come to Negros for an immersion. I asked, ‘Do you ever get used to the work?’ and the answer was, ‘Oh yes, we’re used to the work. What we’ll never get used to are the cries of our children when they cannot sleep because they’re hungry.’”

Speaking of those conversion years, Grenough once told Lernoux: “Everything came together: the reality of the people, the constitution of the Maryknoll sisters and the experience of the church around the world. It was an education and an awakening for me of what it means to be a Christian.”

It was while working in the Philippines Grenough began to encounter Burmese sisters and priests who were studying there. She visited Burma several times and became impressed, she said, with the faith commitments of some of the indigenous people in the northern part of the country. When a request came to Maryknoll from a Burmese bishop Grenough decided the time had come for her to make a switch, joining a newly formed Maryknoll collaborative team, including a sister, brother, priest and three Philippine lay missioners.

“I am still fine, happy and healthy here in Myanmar,” she told me earlier this year in front of a hotel in downtown Yangon with the sun beating down and the temperature reading over 115 degrees Fahrenheit. “We never attempt to convert. There is so much mutual growth in our interactions in this pervasive Buddhist/animist culture – and mostly pre-Vatican II Catholicism.”

Church records indicate there are more than 2,000 women religious, nearly all native Burmese, working in Burma, which has a population of 55 million. Only 25 to 30 of these religious are foreigners. The generals closed the country and expelled all foreigners in 1966. That ban stayed in effect until the early 1990s.

Very discretely foreign missioners began to return during that decade, but are still highly watched and are given only short-term visas, 10 weeks at a stay. This means regular work interruptions. “We have to pay for an air fare, go to Bangkok, and then come back,” Grenough explained.

Before ending my visit with Grenough, I asked her what she had learned as a missioner that she wanted to share with the wider church community.

“I think we have to know how the rest of the world lives before we can understand the life and the call of Jesus,” she said. “Pope Francis is very good, saying, ‘Go to the poor.’ But how few of us really know who the poor are, where they are, how they live and why they’re poor.”

“How are you different as a result of your mission work?”

“As I tell some people, the God that brought me to Maryknoll is no longer the God who keeps me here. My understanding of theology, of creation, of God, of the meaning of life, has all changed. I used to think that to obey a superior was to obey God. And now God is speaking through so many people and so many circumstances. It’s very different and much fuller.”

“And where do you find energy to keep you going?”

“The realities I meet every day and the people I interact with give me life and it gives them life.”

So what does it mean, I wanted to know, to be a missioner today? “Is it about conversion?” I asked.

“No, no, no. For many years the Maryknoll sisters have not been working for conversions. I love our motto, ‘Making God’s love visible.’ The best way we can interact with people is to live with love. . . . We discover there is one God, but in different expressions.”

The poverty that once ambushed Grenough in the Philippines continues to unsettle her today in Burma.

Shaking her head, she says poverty forces many young women into the cities to do sex work. It is estimated, she told me, that there are about 70,000 sex workers in Myanmar, “and God only knows how many are trafficked out.” Eight percent of these women are expected to be HIV positive. “These people have no money. What else can they do?”

HIV, said Grenough, is passed by both women and men. “In Myanmar we have a high percentage of HIV among men who have had sex with other men. But I would still say the highest rate of transmission is through married women who have only one partner. The husband often times goes abroad or migrates to areas for work and gets involved in drug use, particularly in the sharing of needles.”

Government statistics today show one in 200 Burmese are HIV-positive. Burma has one of the highest Asian HIV rates.

Grenough is driven by a startling statistic: Only 40 percent of those needing HIV/AIDS treatment receive it. She cites two reasons: lack of awareness and lack of access.

So this summer she is back in the United States for a visit and to raise money for her mission work. She’s trying to raise $300,000 for three more years of work, $100,000 per year. She thinks that after that local Burmese education efforts can be sustained without her.

Anyone caring to offer assistance, she said, can contact Maryknoll and offer support to its HIV/AIDS ministry program. 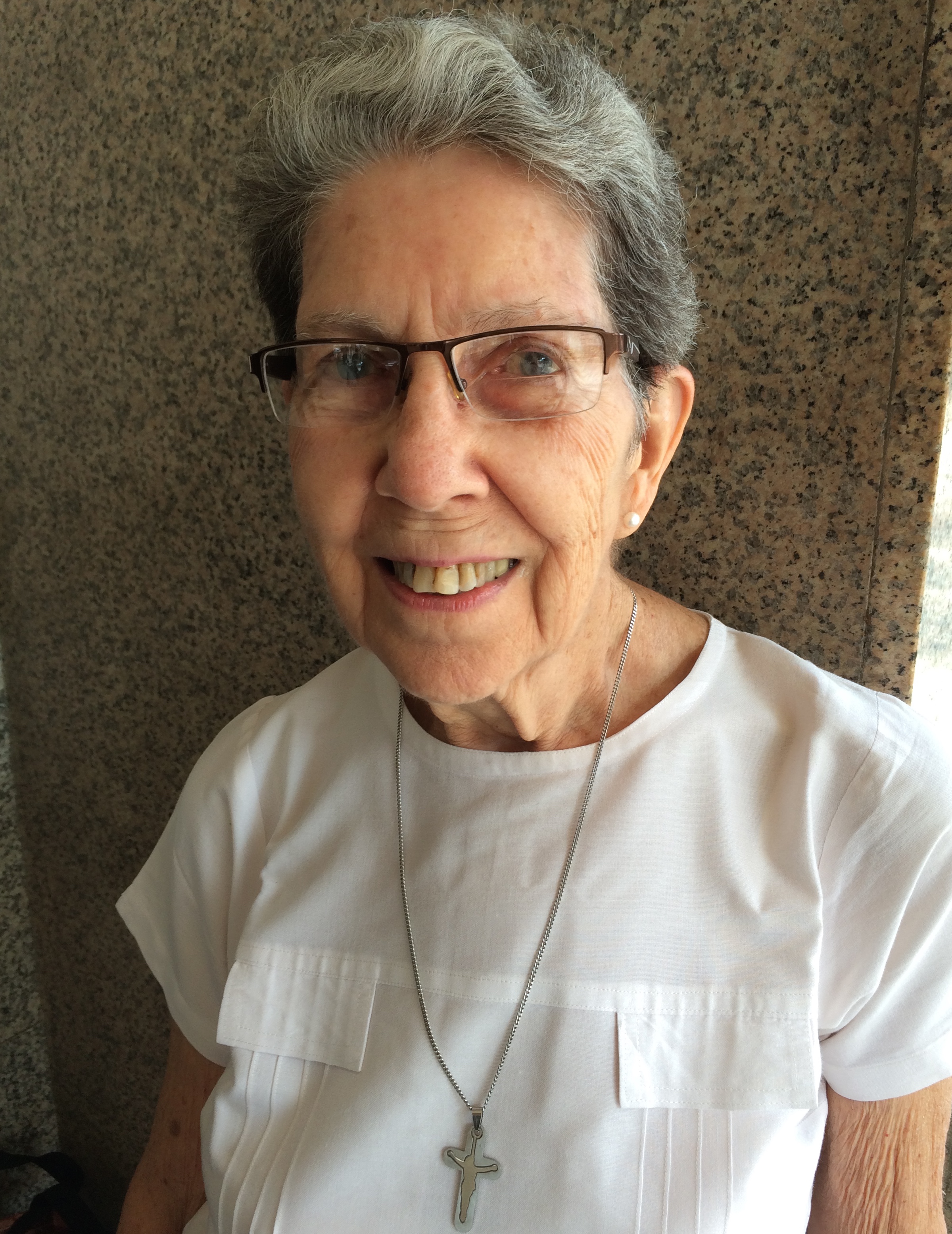 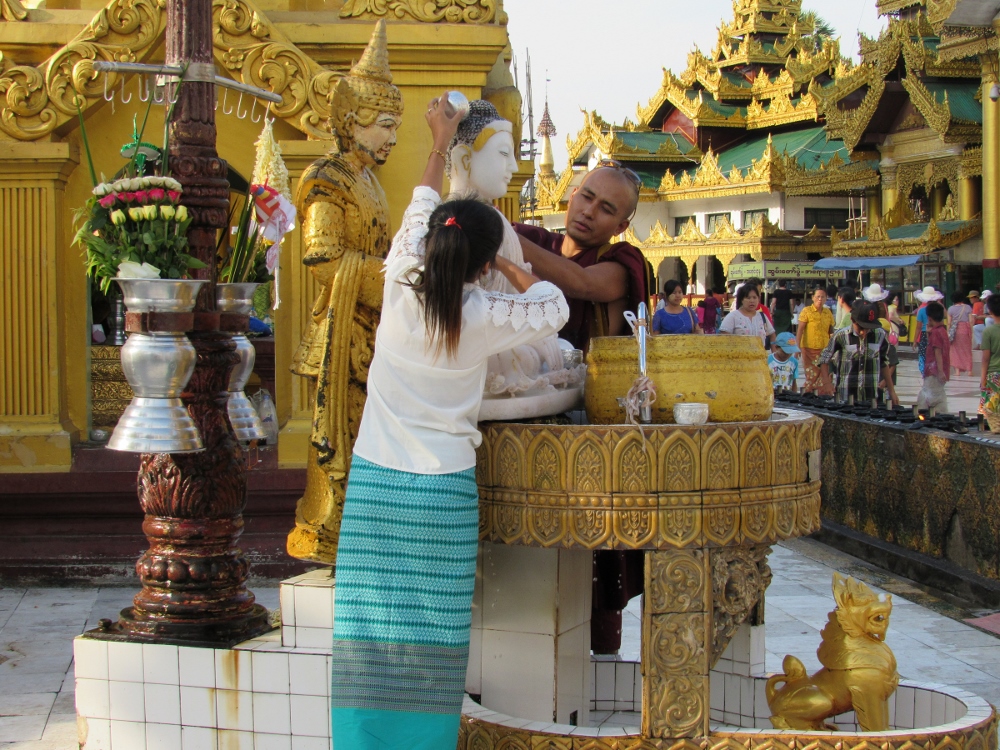 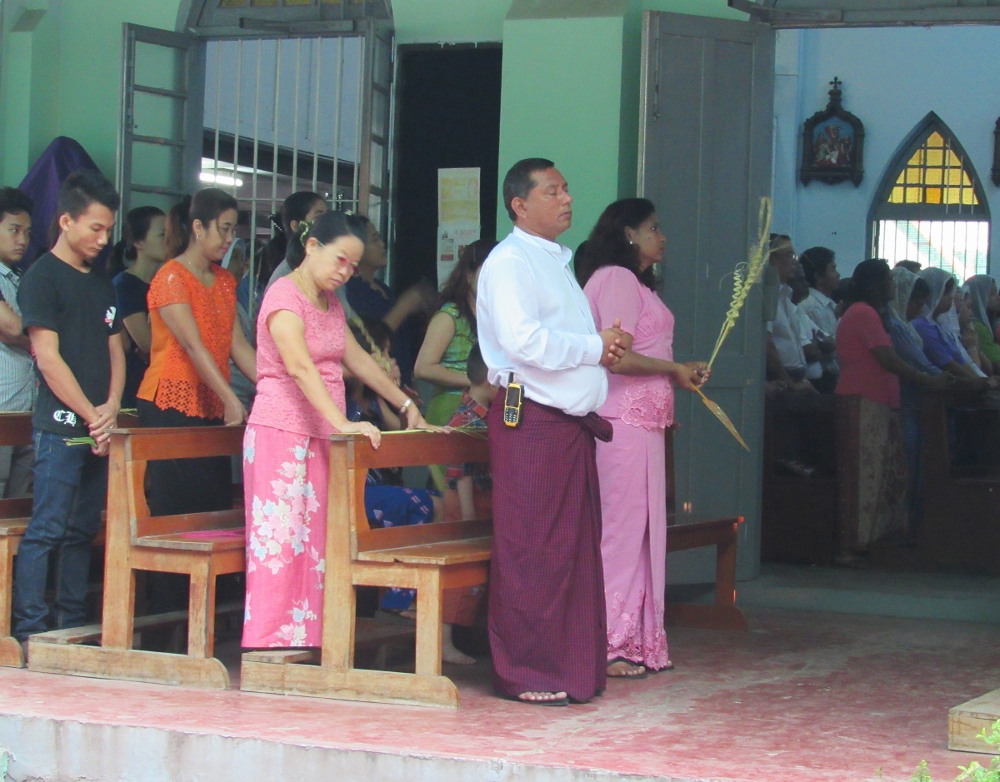 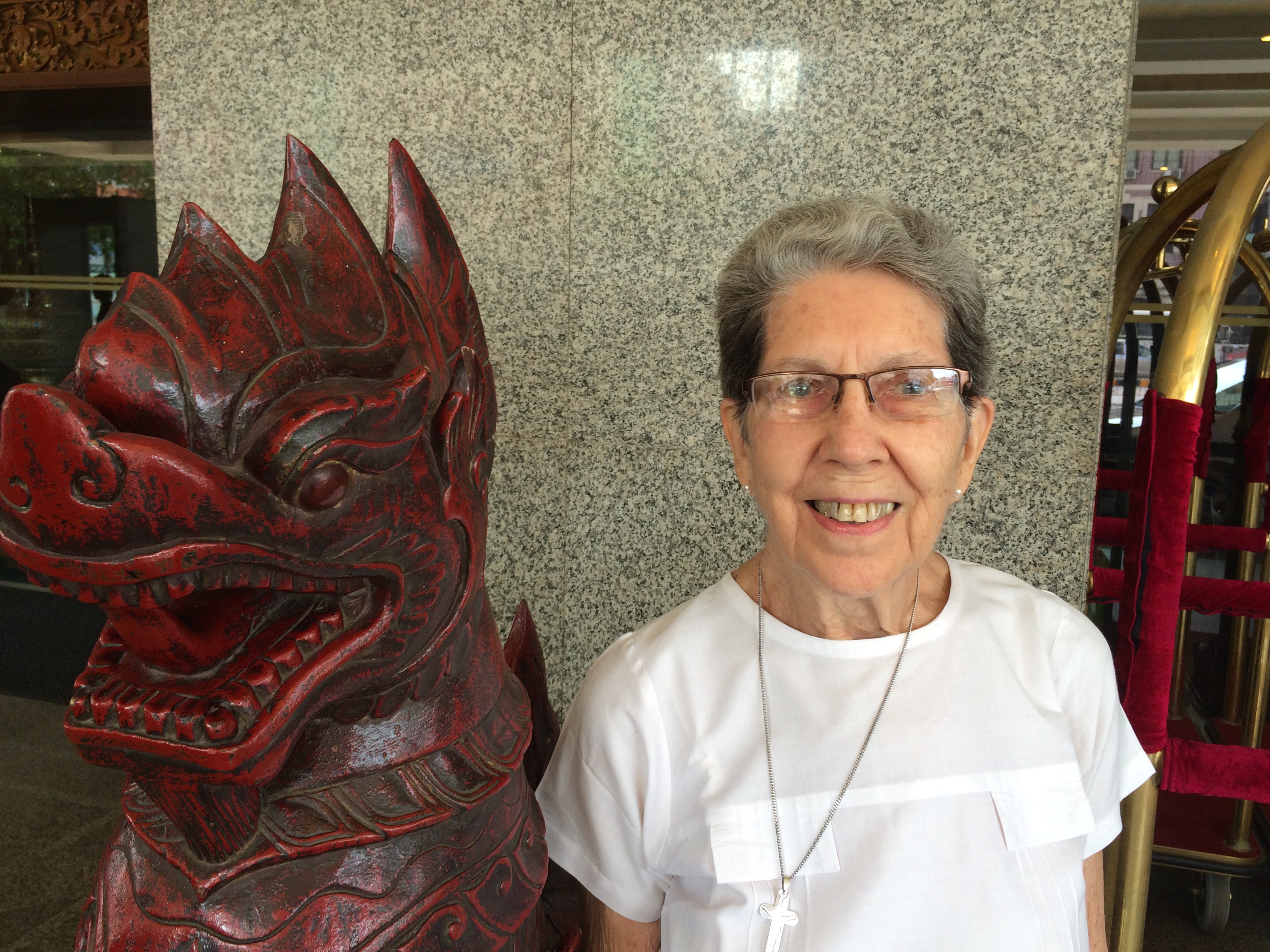