Editor's note: Feb. 8 is the International Day of Prayer and Awareness Against Human Trafficking and the feast day of St. Josephine Bakhita, a Canossian nun and former slave. The date was chosen at the request of women religious to highlight her life. In honor of the day and St. Josephine Bakhita, we are running several pieces about sisters' anti-trafficking work around the world. Find all of our coverage here.

In September, 15-year-old Prospélanda Aimé tried to cross the border between Haiti and the Dominican Republic with an older woman she said was her aunt.

Prospélanda said the aunt thought it would be best if the two of them left Haiti, crossed the border with two cousins, and tried their luck in the neighboring Dominican Republic. There, hundreds of thousands of Haitians live in hopes of a better life.

Their goal was to find work — "commerce," Prospélanda said — possibly selling small convenience items like chewing gum on the street.

But Prospélanda said the plans went awry: The cousins opted not to go. A Dominican man who was supposed to assist them for an undisclosed amount of money was about to take them across the border when police on the Haitian side stopped them, she said.

Prospélanda ended up at Santa Teresita del Niño Jesús, a church-run shelter for potentially trafficked children and unaccompanied minors trying to cross the border. A woman who said she was Prospélanda's aunt later tried to meet Prospélanda outside the safe house but did not have the needed identification to take Prospélanda out of the shelter. That posed a worry that perhaps the woman was not actually Prospélanda's aunt, but someone involved in human trafficking.

Prospélanda's story illustrates the dangers of trafficking and why the issue of human trafficking is so potent to sisters around the world and others within the Catholic humanitarian networks who work with them.

He said trafficking in Haiti has to be seen in the context of the country's ongoing economic vulnerabilities that affect Haitians "at all levels," but are particularly cruel and exploitive to children.

As it turned out, the woman claiming to be Prospélanda's aunt was a buscone, a person not related to Prospélanda at all, said Colombian Sr. Alexandra Bonilla Leonel, a member of the Sisters of St. John the Evangelist, also known as the Juanistas. The Colombian congregation has run a ministry for women and children in Haiti for 22 years and coordinates the operation of the shelter. In 2017, the sisters provided assistance to 500 children in situations of unaccompanied deportation, trafficking and sexual violence, Leonel said.

The sisters eventually contacted with Prospélanda's mother, who traveled to Ouanaminthe, arrived with the right documents and took her daughter home.

Leonel said the dangers posed by young people at risk for being trafficked explain why the sisters have to be so strict about identification from those picking up children at the shelter.

"The traffickers will say things to children like, 'Put in your mind that I am your uncle,' " Leonel said.

In addition to underlying confusion about such experiences, there is often a lack of clarity about numbers.

Cornelia Walther, a spokeswoman for UNICEF in Haiti, said "it is difficult to give a number" about children trafficked in Haiti, telling GSR that sisters like the Juanistas are working "at addressing the needs of different categories of unaccompanied children identified at official and unofficial border points. Not all are trafficked."

In 2017, there were 1,109 Haitian children affected by migration or deportations, she said, and 15 percent were "living with adults they are not related to. This does not mean they were trafficked but has led us to further investigate their status. It is important to stress that we are not talking about traffic here. There are few cases that have been qualified as such."

Nonetheless, even the threat of trafficking is worrisome, and Leonel and others who focus on anti-trafficking efforts on the ground have other allies, including the sisters at the United Nations, many of whom are making human trafficking a key issue of their advocacy work.

For them, the issue of human trafficking has special resonance in February: Feb. 8 is an annual designated day of prayer and awareness about human trafficking by the Pontifical Council for Justice and Peace and the Rome-based International Union of Superiors General, or USIG, of women religious.

The Colombian sister said she believes advocacy at the U.N. can only help them in their local efforts, which in addition to help from Jesuit Refugee Service, are also supported by groups like Catholic Relief Services in the United States, the wider Caritas humanitarian network, and UNICEF.

"It is very important that the work of the church be made visible," she said.

On Sept. 28, not long after Prospélanda tried to cross the border, the United Nations adopted a declaration reaffirming a global plan of action against human trafficking, a stand needed to "stamp out this abominable practice," said United Nations Secretary-General António Guterres. Among other things, the plan of action, originally adopted in 2010, calls on U.N. member states to take "urgent action to prevent trafficking in persons, protect its victims and prosecute its perpetrators."

The reaffirmation, said Sr. Margaret O'Dwyer of the Company of the Daughters of Charity, strengthened the 2010 U.N. document by calling for "stronger protection and support for victims, especially women and children; addressing trafficking for organ procurement; reducing demand; enhancing prosecutions; and bolstering financial support for anti-trafficking efforts," among other things.

However, O'Dwyer added, "the litmus test of the declaration's effectiveness is not the achievement of a signed document or an approved resolution. It will be in coordinated actions which result in effective reduction of human trafficking combined with vigorous prosecution of the atrocity," she said. "We can't rest until no human being is subjected to this horrendous crime."

Sr. Winifred Doherty, who represents the Congregation of Our Lady of Charity of the Good Shepherd and who spoke during the U.N. meetings in September, noted that "women, girls and children are disproportionately affected" in human trafficking, and many are sexually exploited. She urged the United Nations to examine the underlying causes of trafficking.

"An exploitative, consumerist economy is the antithesis of human rights and human dignity," she said.

In an interview with GSR, Mercy Sr. Angela Reed, who coordinates the work of Mercy Global Action at the U.N., spoke of the concerns both O'Dwyer and Doherty raised, praising the world body for its action but noting that a "human rights-based approach" toward human trafficking is not necessarily popular among U.N. member states because "nation-states have to take responsibility" for taking action to prevent trafficking.

"If they don't address things like education, child protections, employment, individuals will continue to be vulnerable to trafficking," she said.

In its most recent report on international human trafficking, the U.S. State Department said while Haiti "does not fully meet the minimum standards for the elimination of trafficking," the country "is making significant efforts to do so." The achievements noted in the 2017 report included strengthening partnerships between a government anti-trafficking commission and international organizations, as well as increasing investigations and prosecutions of those convicted of trafficking crimes, the report said.

Even with this progress, though, girls remain particularly vulnerable. Leonel said Prospélanda's experience of leaving family and school to look for work is all too common.

"In the most peripheral areas of Haiti, children have difficulty accessing schools," Leonel said.

She said in such an environment, teenage girls often become pregnant at an early age, furthering a cycle of poverty that leads them to try to emigrate to the neighboring Dominican Republic, which is more economically prosperous than Haiti. But Creole-speaking Haitians also face discrimination in the Spanish-speaking Dominican Republic, and in recent years, the Dominican Republic has been deporting increasing numbers of Haitians.

"There is no life of stability in the Dominican Republic for Haitian migrants," said Alcimé of Jesuit Refugee Services in Ouanaminthe.

And life at the border is uncertain, too, since there is no consistent pattern of numbers of deportations.

"It's very unstable. We don't know what will happen day-to-day," Alcimé said of the deportations, which human rights groups like Human Rights Watch say are "arbitrary" and target those who live in deepest poverty.

If the numbers of those deported can fluctuate, so can numbers about trafficking of Haitian children.

The Juanistas' ministries are cognizant of these dynamics and focus on providing shelter for trafficked women and children. But the program also serves Haitian children who have left the Dominican Republic and are returning to Haiti, as well as Haitian street children who live in and near Ouanaminthe.

In addition to shelter, the sisters provide support that includes "food, clothing, medical attention, psychological support, school support and family support after they are returned to their families," Leonel said.

The congregation has also developed a leadership training program for young adults as well as a vocational program for those interested in pursuing humanitarian work given Haiti's vulnerability to disasters that are caused by natural events but exacerbated by poverty and the country's fragile infrastructure.

In Ouanaminthe, the work of the sisters is being done quietly and without much fanfare. Leonel notes that networks of traffickers are common along the border Haiti shares with the Dominican Republic.

"It's all too real, this problem," she said.

It's only too real for young people like Prospélanda, who, before being reunited with her mother, found herself halfway across Haiti, separated from her family, out of school and uncertain what her future would be.

She said she felt abandoned and looked forward to being reunited with her family.

"I have nobody here," she said. 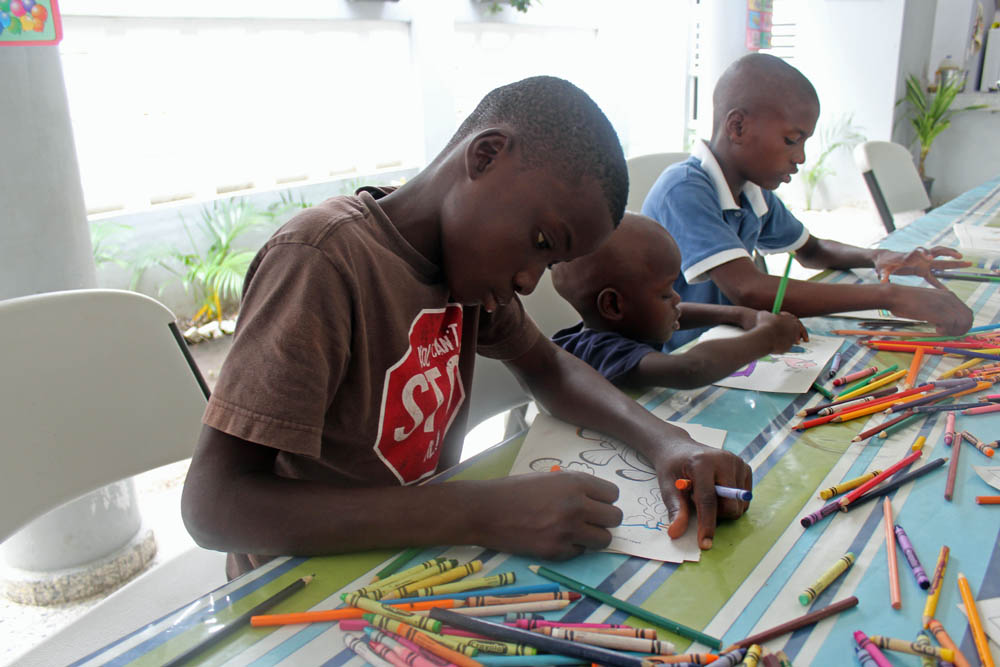 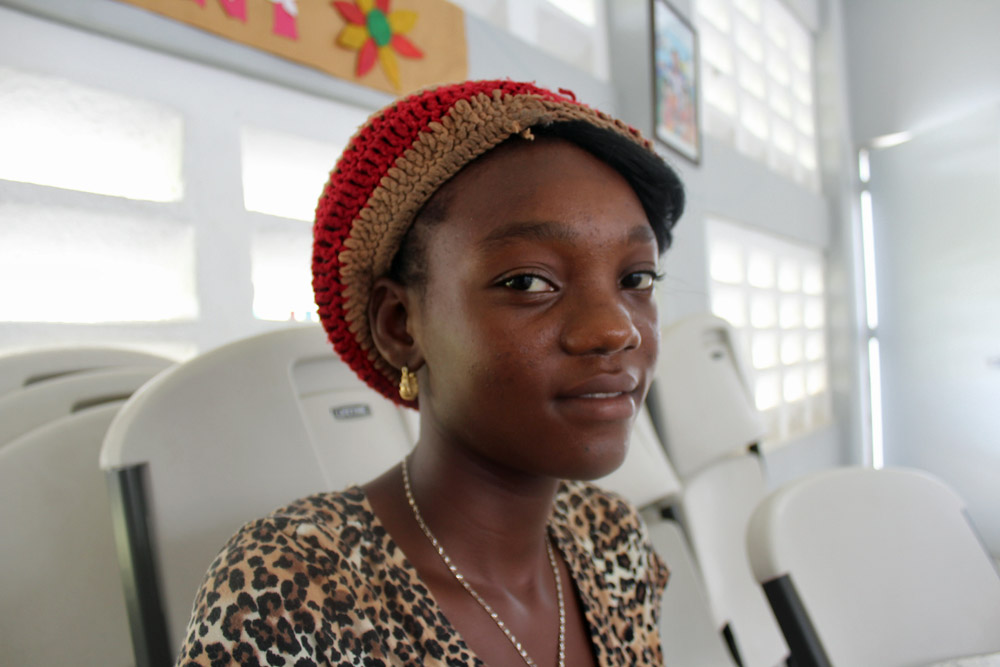 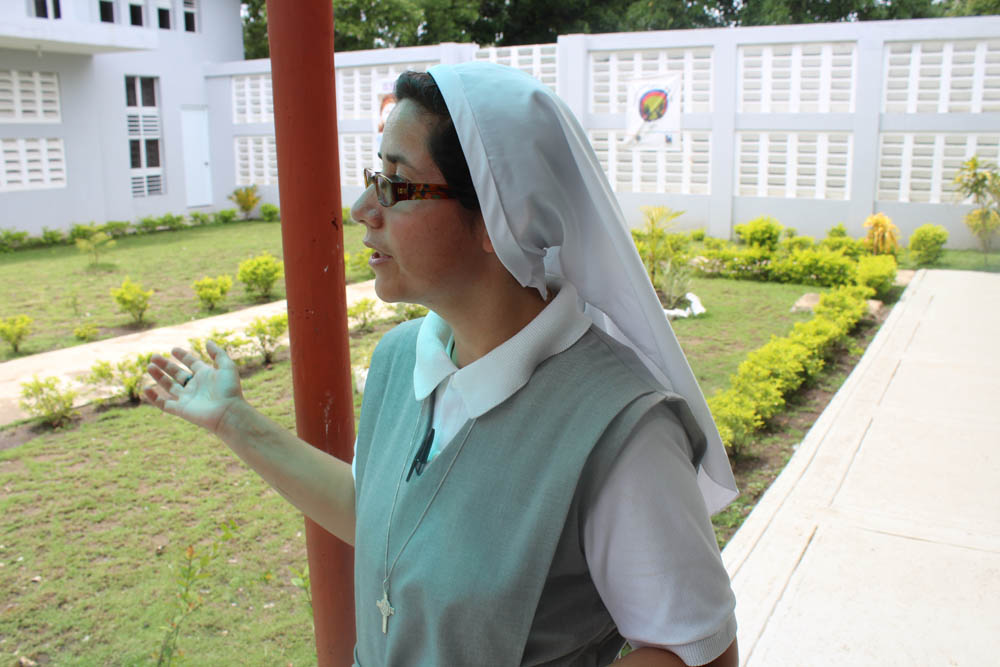 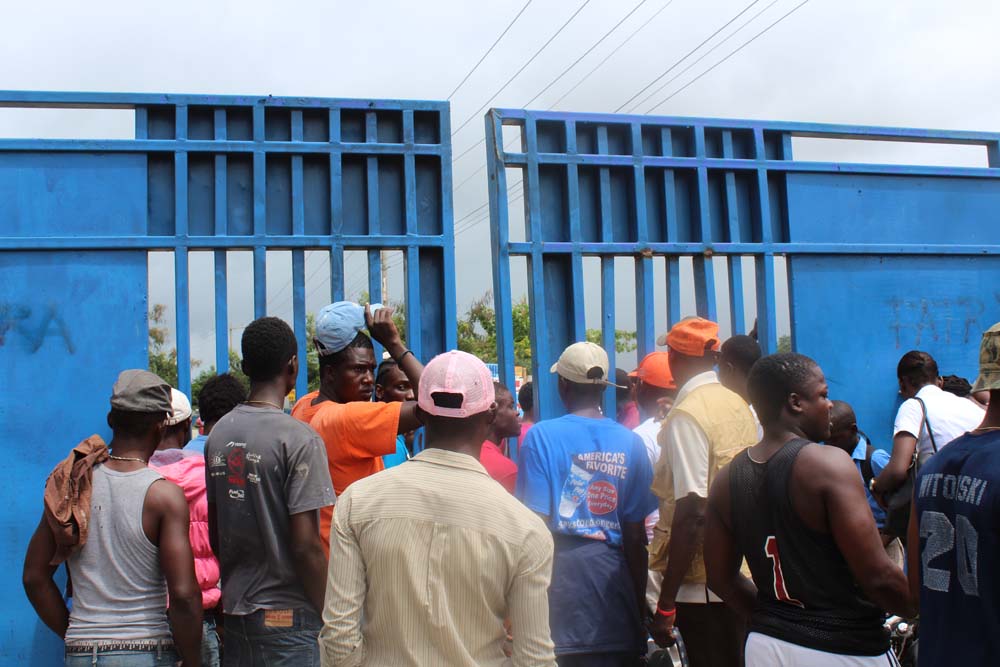