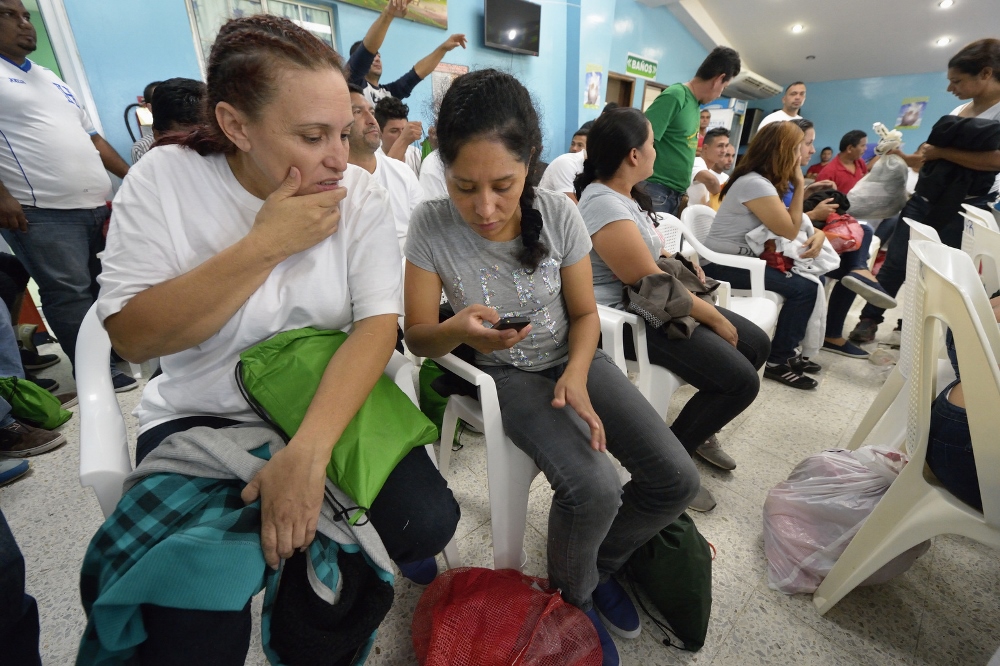 Honduran women deported from the United States use their phones to contact family and friends after they arrived at a church-run center in the San Pedro Sula airport Dec. 17. They were flown to the airport aboard a U.S. government flight, then bused to a remote section of the airport where the Catholic church operates a Center for Attention to Returned Migrants. (CNS photo/Paul Jeffrey)

San Pedro Sula, Honduras — Several times a week, Sr. Valdete Wilemann watches scores of deported Hondurans walk down the stairs of a U.S. government airplane onto the tarmac of the international airport here.

She ushers them into a church-run reception center at the far end of the runway, where the immigrants are welcomed home, offered a quick snack, and have their belts and shoelaces returned. Volunteers briefly interview the migrants, tell them about several services available to them, then send them out the door into the country they chose to leave.

Many days, there are two or three flights. Last year, more than 36,300 Hondurans got off those planes. Yet Wilemann, a Scalabrini sister from Brazil who has run the Center for Attention to Returned Migrants for 10 years, said she constantly fights seeing her job as routine.

"I tell the Lord not to let me grow accustomed to the experience of the migrants. We try to see them not as numbers, but as individuals with different stories, different dreams, each one made in the image of God," Wilemann told Catholic News Service.

Many of those who pass through the center do not plan to stay long in Honduras.

"I'll spend the holidays with family here and then head back home," said a 48-year old woman who was deported in December, her fourth time during 14 years in the U.S. "I've got four daughters and four grandchildren there, and I miss them terribly."

Wilemann said the record-holder might be one man who has taken the one-way flight 17 times. 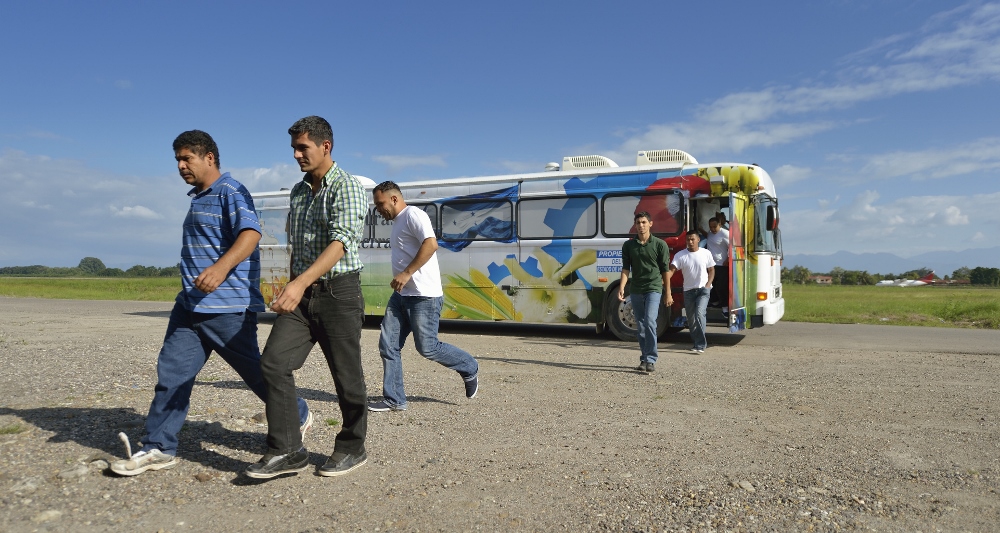 Honduran men deported from the United States arrive at a church-run center in the San Pedro Sula airport. The deported migrants were flown to the airport aboard a U.S. government flight, then bused to a remote section of the airport where the Center for Attention to Returned Migrants is located. (CNS photo/Paul Jeffrey)

"Hondurans never think about what bad can happen to them on the way north. They know the dangers, but they never think it will happen to them," she said. "We hear lots of complaints about physical abuse in Mexico. But in the United States, the problem is more psychological. People say they are treated like dogs, that they're told they are worthless, that they have no rights and that they are criminals or delinquents if they don't have papers."

Yet Wilemann warned against seeing migrants as helpless victims.

"Many of those who are deported learned a lot in the United States. Some have lived there for 20 years. Some come back with gifts and capabilities and a desire to start anew here, but the rampant corruption and organized crime won't let them work, so they feel they have to return to the United States," she said.

Since a 2009 coup, Honduran murder rates have skyrocketed. Wilemann said her staff conducted a survey a year ago that indicated 60 percent of the deportees reported leaving Honduras to escape violence, a shift over earlier years when a majority was motivated to leave because they were seeking better economic opportunities.

The airport reception center is funded by Catholics in the United States and Europe, but support from inside Honduras is meager, Wilemann said. 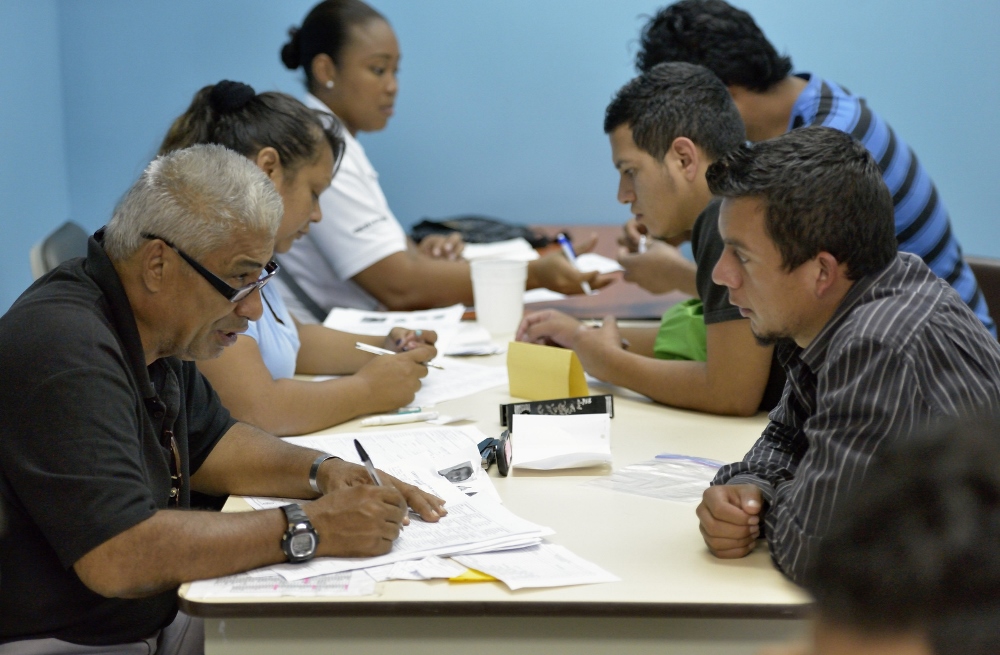 In a church-run center in the San Pedro Sula airport, volunteers fill out paperwork Dec. 17 for Hondurans deported from the United States. (CNS photo/Paul Jeffrey)

"Honduran society knows we're here, knows we receive deportees almost every day, but it doesn't have the curiosity nor the solidarity to come here and be part of this," she said.

She does not let the church off the hook.

"As much as Pope Francis states with his words and actions that he stands with migrants, demanding that we see them as persons, not just as poor persons but as someone valuable who we can learn from, the Honduran church doesn't do enough. Pastoral work with migrants isn't just the responsibility of the Scalabrini sisters. It's the responsibility of the whole church," she said.

"I often get calls from priests who say, 'There's a migrant who came to me,' and I say to him, 'Yes, Father, what are you going to do?'"

The Honduran government only gets involved in immigration issues when it is pressured by the U.S. government, said Jesuit Father Ismael Moreno, director of a Jesuit think tank in El Progreso. Otherwise it welcomes the more than $8.5 million a day in remittances sent home by Hondurans living in the United States, Spain, and elsewhere. In 2013, these remittances totaled a record $3.1 billion, and 2014 numbers are expected to increase by 9 percent.

"For the Honduran government and the country's business elite, it makes good business sense that there are a million Hondurans abroad sending money here. Remittances are a key to the survival of their economic model. We can't expect the government to do anything that would jeopardize its own survival," Father Moreno said. 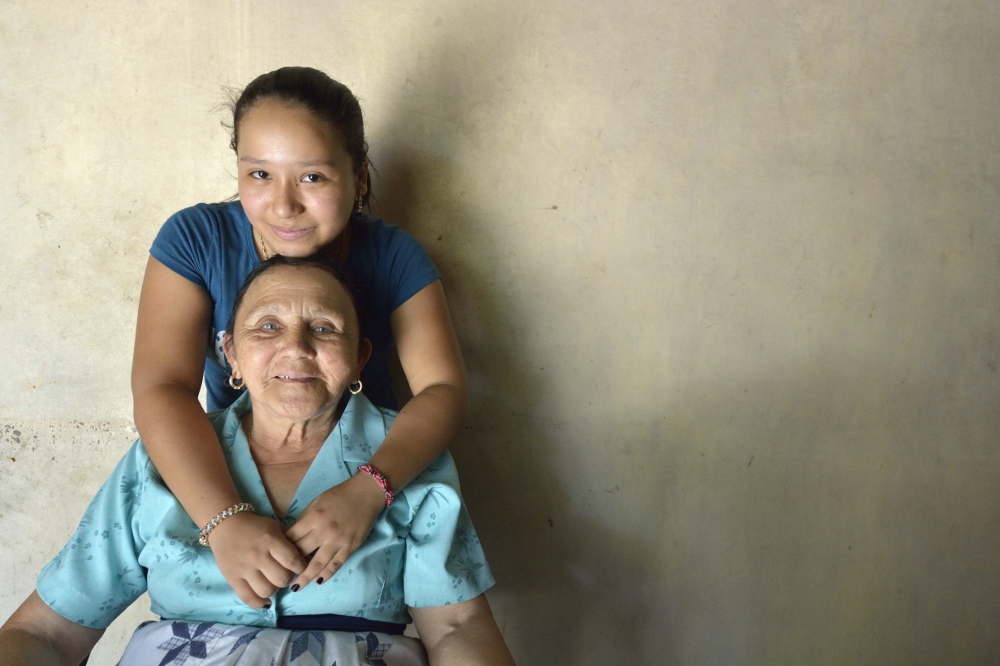 Aleska Garcia, 17, poses with her grandmother, Petronila Reyes, at their home in Goascoran, Honduras, Dec. 13. The teenager left Honduras in June 2014 to travel north to be with her mother, who has lived in the United States for 12 years, but she was det ained by Mexican immigration officials and returned to Honduras. For now she says she wants to remain at home and finish her high school studies. (CNS photo/Paul Jeffrey)

The Honduran government did respond publicly last year when the number of child migrants showing up on the U.S. border brought unprecedented media attention.

"The government's response made me furious," said Wilemann. "The first lady organized a task force, but it was chaos, and nothing happened as a result. She was never interested in immigration before, but she came here to visit and there were more journalists and security for her than there were immigrants."

Migrants sent home from Mexico are bused to Corinto, on the border with Guatemala, where they're received by the Honduran Red Cross and set free without even the snack the airborne deportees get on arrival. Carlos Espinoza, a bus driver on the run from Corinto to Puerto Cortes, said many of the returnees do not have money to pay the bus fare.

"We just let them ride for free. It's sad to leave with so much hope and come back with nothing," he said.

Wilemann is negotiating with the government to provide services to those returned by land.

In the meantime, the Mennonite Center for Social Action provides assistance to unaccompanied minors and families who are bused home. The program's director, Erika Murillo, said that's not enough.

"We'd like to help communities establish social and economic opportunities so that people won't feel they have to leave. People tell us with tears in their eyes that if we can find them a job, they won't go. We tell them there are job opportunities, and they ask us where. We send them to government ministries that supposedly hook them up with jobs, and they go and put their names on lists. Yet nothing ever happens," Murillo said. "People have lost hope. The structure of poverty and organized crime and violence is pushing people to the point that the only option they can visualize is to leave."

"What can we say to a man whose son has been killed, but who wants to leave in order to save the lives of his other children?" she asked.

The full circle of donations

From the inside looking out