The Leadership Conference of Women Religious membership on Friday morning voted to adopt a resolution that commits member congregations to addressing systemic causes of injustice.

"We pledge prayer, education and advocacy," the resolution read, "and commit to using our collective voice, resources, and power in collaboration with others to establish justice which reflects God's abundant love and desire that all may have life."

While the resolution itself is broad — it mentions economic justice, the promotion of nonviolence and environmental stewardship, among other topics — the focus of the resolution presentation, unquestionably, was immigration and the detention of women and children seeking asylum.

An estimated 1,700 Latin American parents and children who fled violence in their home countries are being held in three privately owned detention centers in the United States — two of them less than 300 miles from Houston, where LCWR is meeting.

Then, in a panel discussion, Dominican Sr. Eileen Gannon and Franciscan Sr. Marilyn Geiger, two members of the Global Concerns Committee, skimmed some of the systemic issues that cause Central Americans to come to the United States in the first place — causes like extreme poverty and corrupt and violent governments.

After the vote, Providence Sr. Jo Ann Showalter, chair of the Global Concerns Committee, asked sisters to participate in a justice action by calling, writing or tweeting President Barack Obama with an imperative: End family detention.

"We've heard the cry of our sisters imprisoned simply because they sought life for their children and safety in our land," she said to the membership body. "But there's still much do be done until all the women and children are released and cared for."

Sr. Ann Scholz, a School Sister of Notre Dame and LCWR's associate director for social mission, said the Global Concerns Committee hopes momentum on detention won't stop there. She said they intentionally paired a justice action on detention with a resolution on systemic justice so sisters would begin thinking about holistic solutions to the issue.

"Why are these women incarcerated? Why were they forced from their homes in Honduras, El Salvador and Guatemala?" Scholz offered to Global Sisters Report as examples of what a systemic approach to detention takes into consideration. "Why is the United States government so convinced it needs to hold these women and young children in prison-like conditions? What is it that creates the violence and poverty in the northern triangle of Central America?"

The sisters from LCWR region 12, which is made up of the religious communities in Texas, Arkansas, Arizona and New Mexico, have already been grappling with some of these questions out of sheer necessity, they say.

"It's right in our backyard," Sr. JT Dwyer, a Daughter of Charity from San Antonio, told GSR. "Region 12, we deal with border issues day in and day out."

Dwyer, whose post-retirement ministry — through the Interfaith Welcome Coalition — is aiding women both during and after their detention, spent the three days before the vote on the resolution handing out information on family detention in the assembly's exhibition hall, hoping, she said, to educate sisters from other parts of the country on the severity of the issue.

"People who don't live on the border, they've read in the papers or on the Internet that women are being kept in prison-like facilities with their children," she said. "But they don't always understand that it's against our own laws and policies in the United States."

The Global Concerns Committee had an eye on these very laws, litigation and policies as the day of the resolution vote approached. The latest move in a courtroom tug-of-war regarding the legality of family detention was expected the day before the vote.

In July, U.S. District Judge Dolly Gee in Los Angeles ruled that keeping children in detention, with or without their parents, was in violation of the 1997 Flores vs. Meese settlement. The U.S. government was given 90 days to come up with an alternative plan for the families currently in detention. At the close of that period, the government asked for an extension and last week asked Gee to reconsider her ruling.

The attorneys for the detainees had until Thursday (yesterday, Aug. 13) to respond, though at the time of reporting, they had not done so.

Scholz said in light of the fluid legal situation, the Global Concerns Committee toyed with the idea of shifting the focus of Friday's justice action to the detention of all immigrants. However, they ultimately decided to stick with the detention of women and children because even when — not if, she noted — these families are released, they will need a lot of social and legal support, which women religious can provide.

"I think we're going to win family detention," Scholz said. "But the ministry with new immigrants has longevity. I mean, if you think about why religious women came to this country in the first place, it was primarily — though not exclusively — as immigrants, following immigrant communities, to serve immigrants."

And the message of Friday's holistic call for justice echoes that history, she said.

"New immigrants are always numbered among the least and the most marginalized, so we will definitely continue to see religious women playing a significant role in their lives," she said, "whether that's initial service as they enter the country, accompanying migrants as they begin to integrate into new communities or if it's advocacy for real, comprehensive, compassionate immigration reform."

Rather than having the host region — which, this year, is region 12 — pick the resolution and justice action, the interregional Global Concerns Committee drafted a resolution after discerning over common themes discussed in fall regional meetings. The full membership body reviewed that draft in additional regional meetings this spring. 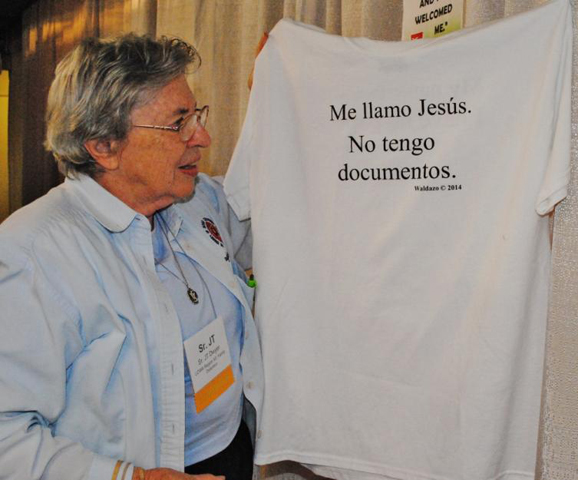 Daughter of Charity Sr. JT Dwyer displays a T-shirt hanging in the LCWR Region XII: Family Detention booth, one of the exhibitors at the assembly. In English on the other side, the shirt says: "My name is Jesus. I have no papers." (GSR photo/Dawn Cherie Araujo) 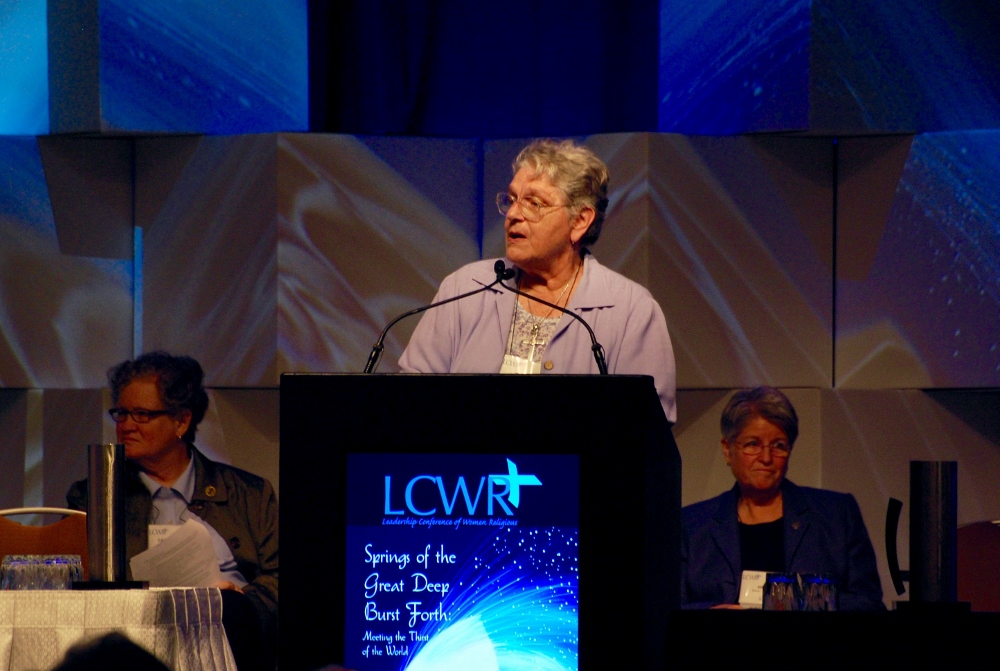 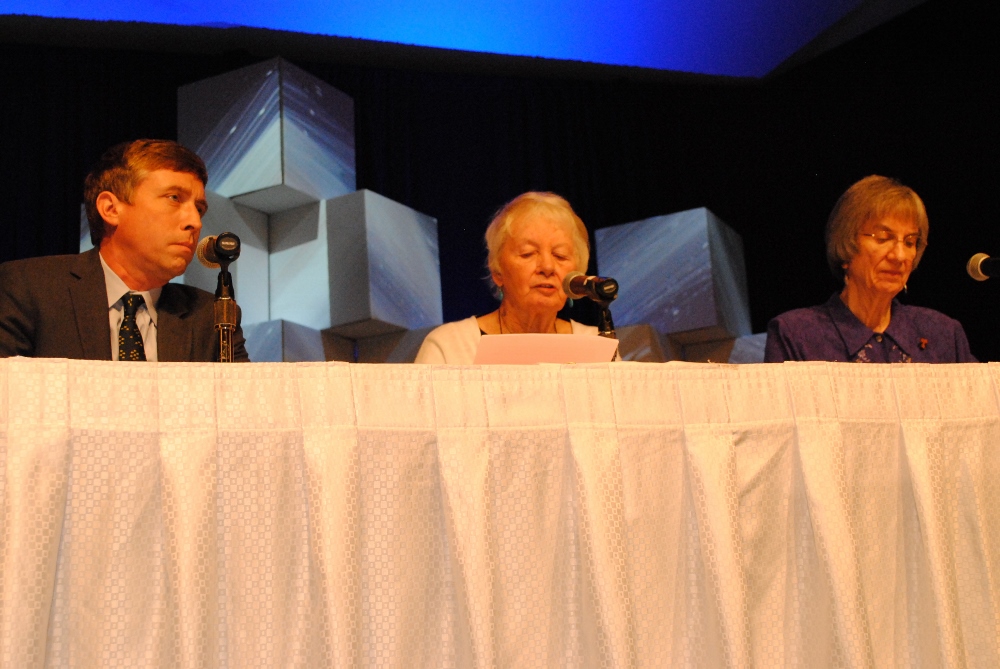